Next in line in our series of announcer interviews, the one and only Sven WillIBeFamous. 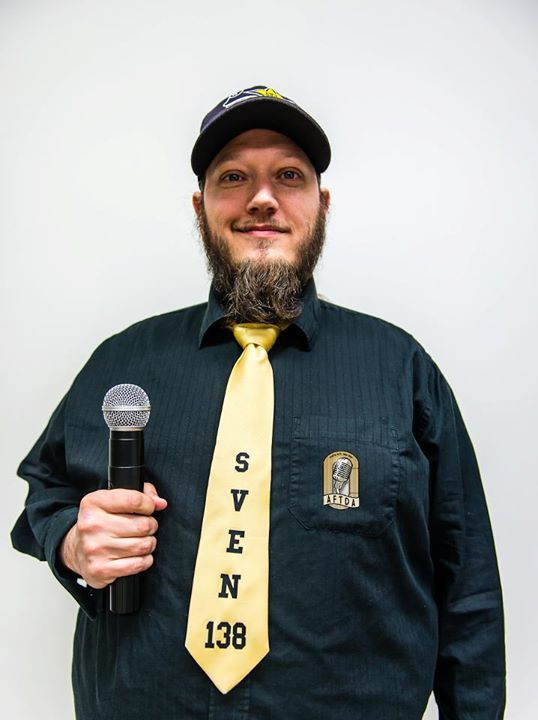 Photo by Zero-G Photography How did you get started announcing? It was the start of 2010 and myself and fellow Newcastle Rollergirls ref Glen Moreangry had been invited to stay with some friends in Falkirk. Glen had just started dating Blackjack Belle who was skating with ARRG and it was arranged that we'd go to see London Rockin Rollers versus Glasgow's Irn Bruisers on the Saturday and then Leeds Roller Dolls versus ARRG's Twisted Thistles on the Sunday. I had heard about Roller Derby but never seen it and so after a bit of googling decided it would be a good place for Glen and I to try out our budding hobby of photography. The Saturday came and we arrived at the Arc, cameras in hand to try and shoot some of the action. About 10 minutes into the bout we both realised that we'd forgotten about the photography and were just enthralled by the game. The next day we went to Meadowbank, again with the cameras but I don't think either of us removed the lens caps. After the bout we were leaving and Blackjack suggested that I should take up announcing, as I'd recently been dabbling with stand up comedy and that was it. Sven WillIBeFamous was born. I even came up with the name there and then. Next thing I know I've been volunteered to announce at Highland Fling, A 2 day tournament in Aberdeen. I had a few months to learn the rules and even did some NSOing with ARRG. It was while NSOing that we found out about Newcastle Rollergirls, our home city league! Highland Fling came around sooner than expected and Helliverance and I spent a weekend trying to fill air time with our meandering banter. The week after, Glen and I joined Newcastle Rollergirls properly as referees and as we were learning the ropes I was announcing as many bouts as I could. Announcers all have different styles, how would you describe your style and how do you think your experience as a referee has altered it? My style is definitely play by play(PBP) now. I think when I started I was a mix of colour and PBP but then I had the fortune to work with Bulldog, during a Berlin vs ARRG bout. I learned a lot that day including the way that a true PBP announcer works, and I started to work on that style. I now alter my style depending on who I'm working with and what works best. I think that being a referee definitely helps me as an announcer as I can pick up on whistles and hand signals and of course, I have a very good knowledge of the rules. How do you prepare for bouts and how much work do you have to do on the fly? It all depends on which bouts I'm announcing. If it's 2 teams that I know really well then I normally just make sure I have the postcode for the venue and spare batteries for my microphones... On the day I spend a bit of time getting to know the rosters. For this I like to watch the skaters warm up and commit their names and numbers and any distinguishing features to memory. I'll then write out the rosters side by side on a fresh sheet of paper in numeric order, which helps to cement them into my brain(and is also a handy reference for me mid bout). How do you find that stream announcing differs from trackside? Stream announcing is the announcing equivalent of taking a car to a private track. You get to do all the stuff there that you normally aren't allowed to. You have the freedom to discuss tactics, say what you think 1 team is trying to do and you don't have to worry about hyping the crowd. You still have to be careful what you say though, and I wouldn't say anything about a skater on the stream that I wouldn't also say to their face. Skaters have skate heroes, do you have any announcer heroes? If you're talking announcers/commentators of any sport then I guess I'd have to say Al Michaels from the NFL's Monday Night Football. I've spent nearly 30 years following the NFL and Al Michaels is definitely one of those voices that has been with the game all that time, and is considered one of the best play by play callers in the game. I don't know if I could single out any particular heroes in derby announcing but there are a lot of people out there that I look up to and love working with. It sounds cheesy but anyone that is willing to devote their time to learning the sport, the gameplay, the tactics and the teams gets my worship. What has been your favourite bout to call and what are you looking forward to calling in the future? I was lucky enough to spend 3 days announcing Track Queens in Berlin last November and was paired with L'il Joker. Every bout we called there was amazing and we were lucky enough to call most of the ARRG and GRD bouts. I can't really pick 1 bout out of the many we did that weekend though, maybe ARRG vs LRG if I was pushed. Most recently it was the last 2 bouts of MERDC 2013. I called the 3rd place final and saw Tyne and Fear fight tooth and nail with The Inhuman League to take 3rd in Europe and then the Final was something else. Probably the greatest deby crowd I've ever had the pleasure to work with. Helliverance was announcing with me and was in his element! The next bouts I'm looking forward to announcing will be at the Men's Roller Derby World Cup in March, where I'll be co-ordinating the house announcing.