2016 has been a successful year for Bairn City Rollers (BCR) Central Belters, with them winning all of the games they played, this has built up a winning streak of 4 games going back to November 2015. Since May of 2015 they have only lost 1 out of the six games they have played. This has seen them climb the rankings during 2016  from 353rd at the start of the year,  to137th where they currently sit. As it is the end of the year, the belters recently voted in their new Captain and Vice for 2017 so I took the opportunity to ask their exiting captain and vice a few questions about their year in charge. Captain: Macfarlane 606 #Mac Vice Captain: JaneSaw Massacre 254 #JM 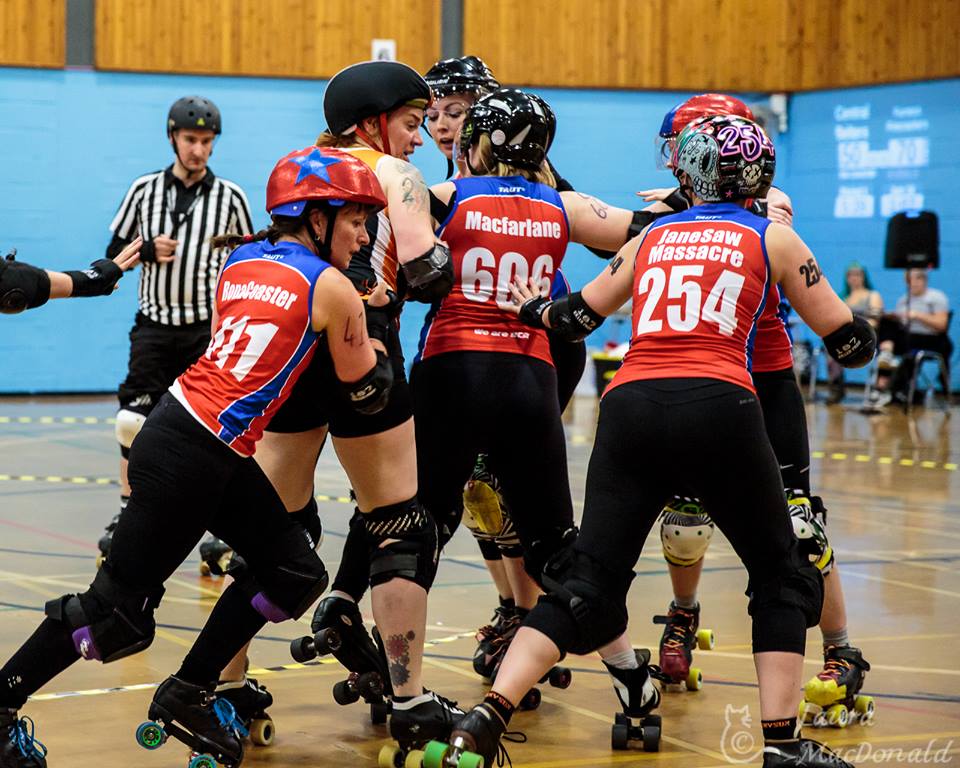 Picture courtesy of Laura MacDonald After a mixed 2015 (5 games: 2 wins 3 losses), did you set yourselves any goals for the team? Mac: At the time, the 2015 season was our most successful season to date. Our main goal was for the team to capitalise on our success and hopefully better it in 2016. JM: Losing does get boring after a while so we really just set out to win through determination, hard work and commitment to training week in and week out. This year you played three games, two less than last year. Was this a specific choice you made? Mac: It wasn’t a conscious decision, we did have more games lined up at the beginning of the year but they were cancelled due to reasons out with our control. But I think it has worked out really well for us as we had a few new skaters join our team. JM: A benefit of being part of a Co-ed League is the opportunity to play in the Co-ed bouts as well. Our league is very flexible, quite a few of our skaters Guest elsewhere, and join in with other League training sessions, it means that those who want to bout more can. Although the Belters played less games, 2016 was a fantastic year as you won all of your games. Did you think at the beginning of the year that was a possibility? Mac: I had a feeling we would capitalise on our success at the end of the 2015 but I really didn’t think we would have the season that we did! We lost a few skaters at the beginning of the year, which meant our roster was reduced but we seemed to have made our small roster work to our advantage! The first two games of 2016 saw you win both by quite a margin (405pts and 248pts), was the differential a big surprise to you after the games? JM: Yes, our rankings were so low compared to the other teams that solely going by the predictor it looked like we would be facing an uphill battle. Mac: It was a surprise to me. Against Belfast City Rockets I expected us to do well but with them a good few places above us in Flat Track Stats rankings before we played I hoped maybe we'd have a chance of taking the win. North Cheshire Victory Rollers were similarly ranked to us so I expected a really close game. During 216 you have never had a full roster and usually play with 9 or 10. Some teams struggle playing with that amount of players, why do you think this hasn't been the case with the Belters this year? Mac: Playing short is always difficult but we have managed to make it work for us this year. JM: We work well under pressure, a smaller roster means more track time even though its tiring! Mac: We all have set roles in the team now, rather than having lots of skaters cover a couple of positions. We have been lucky to have a line-up manager that knows the team really well, which means each line is as strong as it possibly can be. JM: I think having less players on game day helps to keep us focussed and play cleanly as you can’t afford foul outs because you are playing so short. Everyone has their job to do and we trust each other to do it. Your roster is largely the same as it was the last year and a half with the exception of a few skaters who have left. Do you think this has been of benefit to you? JM: It's always sad to say goodbye to skaters who’ve been part of the team and league no matter for how short or long a period of time. Mac: We have found what works best for the team and we have became a lot more focused in training and what we want out of games. We also have a strong team bond, with all team members not just the core group of skaters. JM: We have set roles in the team, which has made a huge difference.  Knowing how people skate, what they like and don’t, learning set “plays”, spending time with each other, all helps, we laugh a lot, I love that. Mac: Having a strong core of skaters has been a benefit to the team. Knowing each other's strengths and weaknesses makes sure we support each other on track. 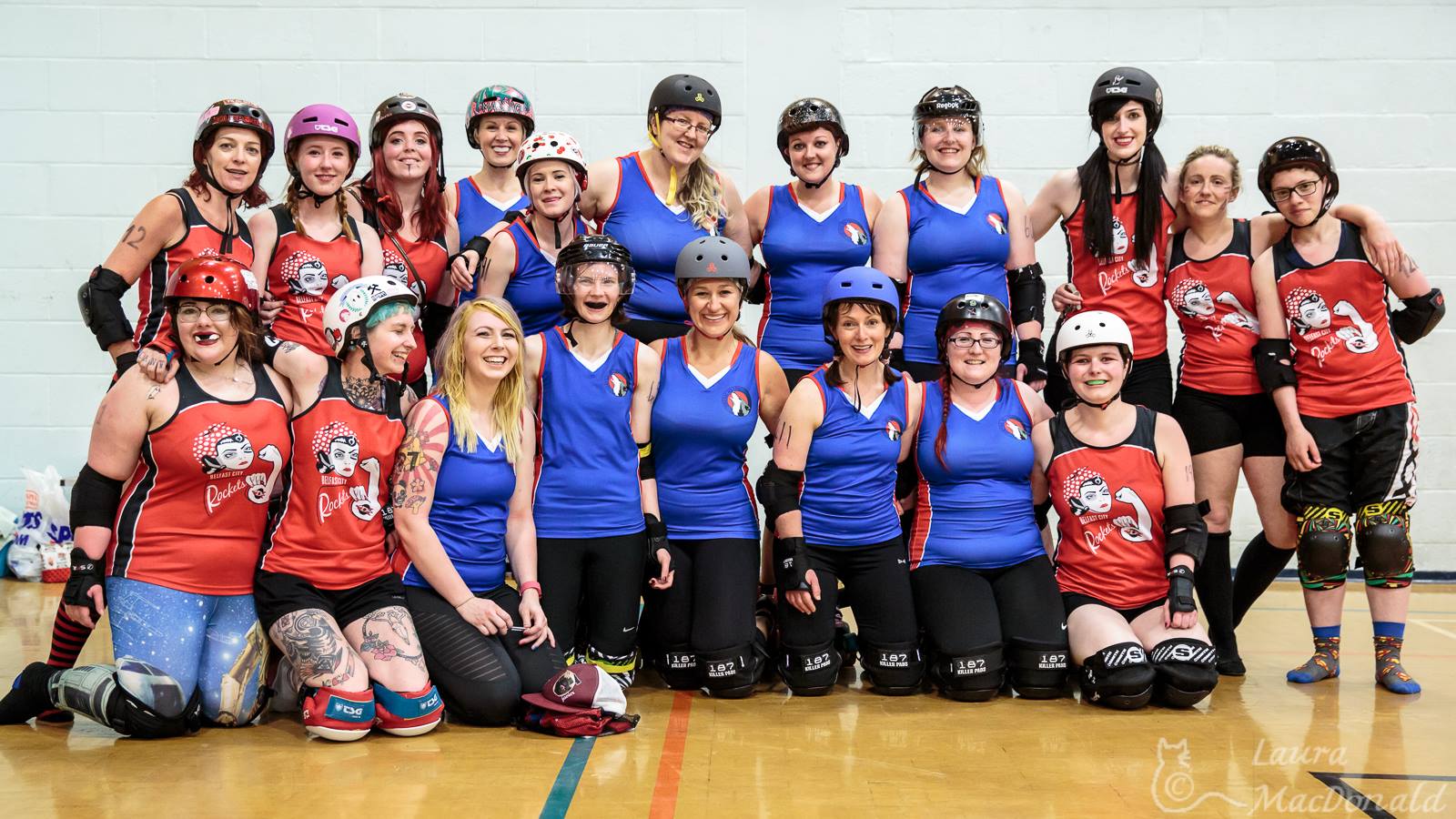 Picture courtesy of Laura MacDonald You have had a few new skaters this year who have integrated well into your team so much so you would be forgiven for not realising it was their first games. Why do you think that is? JM: I think a lot of this has to go back to the individuals, they are totally committed to the training programme and wanted to bout, so they made it happen for themselves. Mac: Our new skaters have managed to find their role within the team very quickly. I feel this is down to working together lots at training and making sure each new skater feels like a welcome addition to the team. JM: Also with having such a small New Skater intake our skaters got a lot of attention, one to one training and scrimmed lots before their first games. Mac: We have more skaters due to come through in the near future so hopefully our high standard continues. Have any of your new skaters stood out and impressed you this year? Mac: All the new skaters have impressed me in so many different ways! Their attitude towards training has been excellent. They came into the team in a time of change and really stepped up to the challenge! After both of RonaCoaster and Volcanic Ash’s first games I have had people say how impressed they are that these two new skaters are playing at such a high level so early on in their derby career. JM: They all have, we had two skaters come through BCR’s New Skater Programme and one Transfer Skater.  We’re very fortunate to have them, they’re awesome!  Quality over quantity all the way. 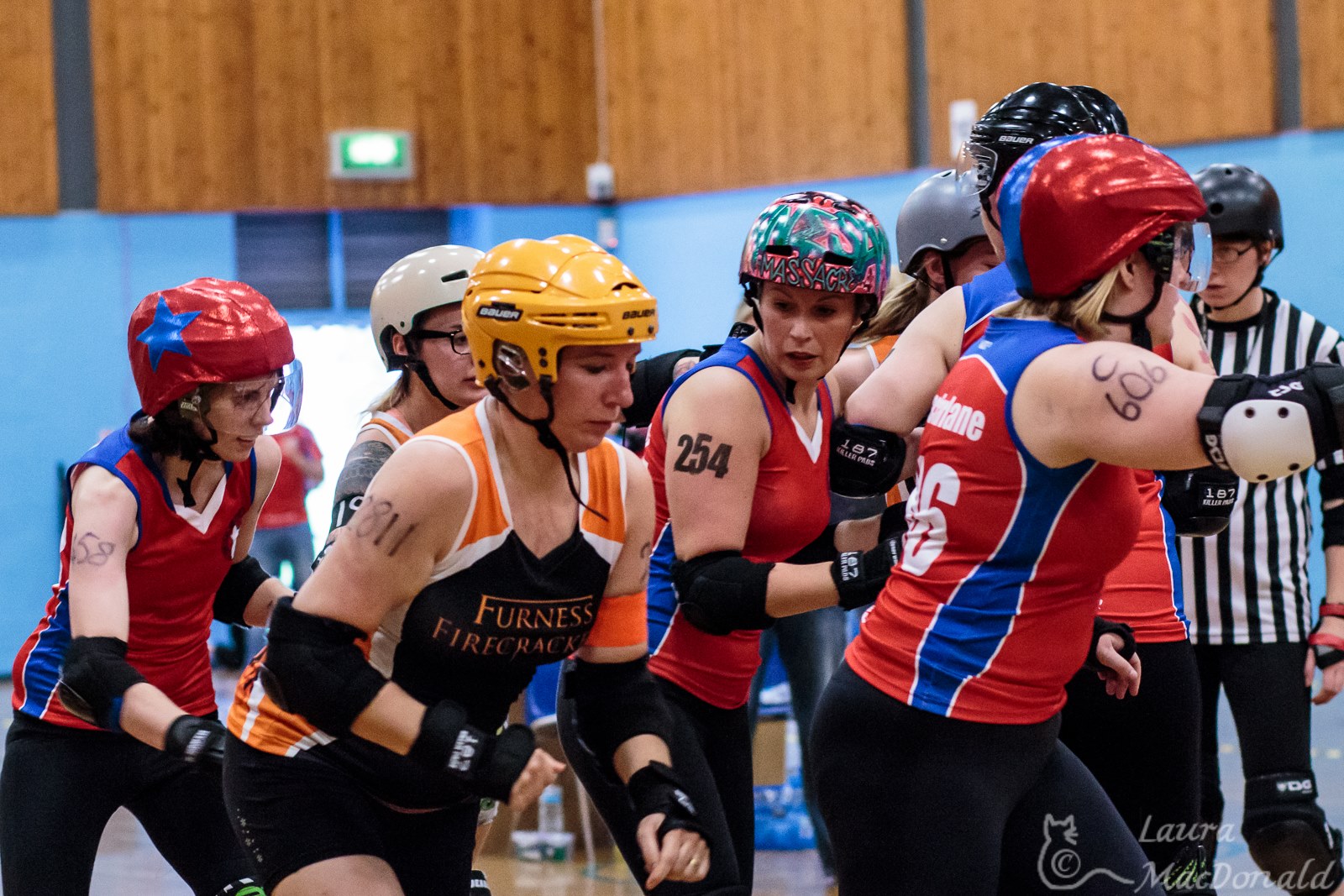 Picture courtesy of Laura MacDonald Over the last 2 years we have slowly seen a change in the Belters playing style, what would you attribute this to and has it helped with your game results? Mac: Having consistency in the leadership and coaching has helped shape our playing style. We decided to focus on using a few simple yet effective tactics which has allowed us to really up our game, this has allowed our newer skaters to get up to speed relatively quickly as well. JM: I think that quite a few of our League members also Referee/NSO on a regular basis throughout Scotland and further afield really helps us with rules and game play. We’re also very lucky to benefit from skilled coaches, most of whom skate or have skated for Power of Scotland Mens Roller Derby. Mac: We are also very lucky that we have the opportunity to practice our tactics against the Skelpies at each training session. Since 2015 your ranking has been on the move up but really jumped in 2016 thanks to your 4 game unbeaten run going back to November 2015. Do you think that the team can continue this on in 2017? Mac: I am very hopeful our success will continue into 2017. We have voted in an excellent captain and vice for the new season who will make sure we work hard! We will just need to keep the hard work at training and organise as many scrims as we possibly can to ensure we have lots of time to practice as a team. Finally throughout your time as Captain and vice what what has been your fondest memory and moments that stand out over the last year in charge? JM: We changed our logo and colours throughout the year to tie in with the Skelpies and main League colours.  That felt like a fresh start and I think that's what the Belters needed. Mac: My fondest memory is just seeing how much the team has improved. Everyone has upped their game and we all have the same goals for the team. JM: I’ve loved all of 2016!  I joined S&T and started coaching on Monday nights endurance and skills based training, that was interesting, especially when I brought the rugby tackle bags to training! Mac: My favourite game this year was our last one against the Furness Firecrakers. It was our biggest challenge and we fought right to the end and we came out on top. JM: The Furness game was a particular highlight for me what with all the lead changes throughout the game. That really was a fight to the finish with both teams leaving everything on the track.  That was also the first game I got to play in with my sister (Volcanic Ash) and her cherry popper!  So that game will always be special. 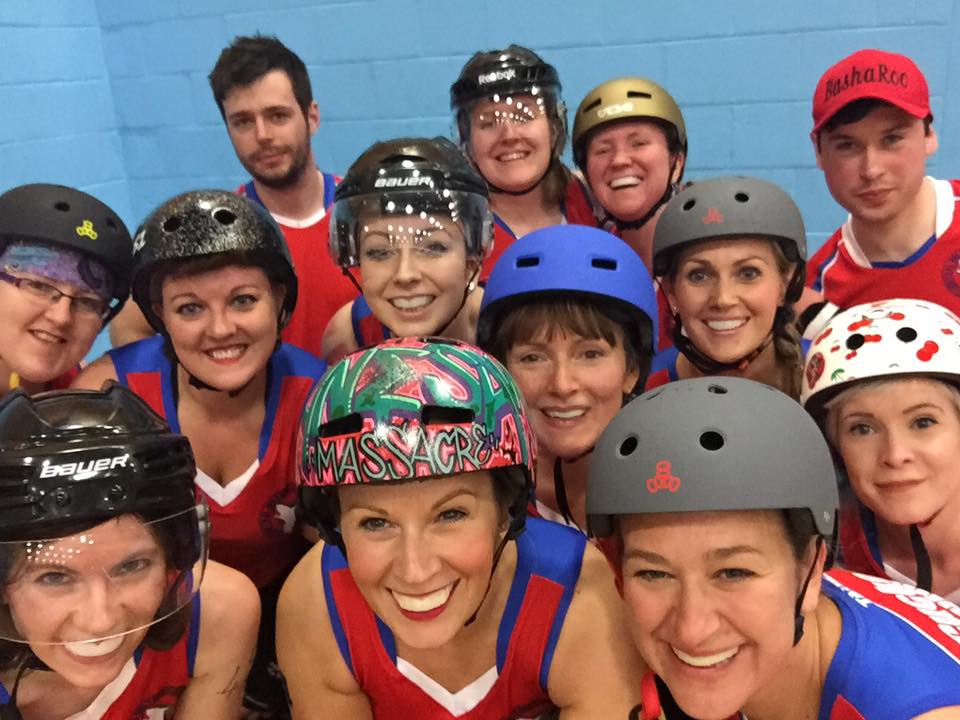