Sometimes Roller Derby doesn't live up to its reputation, but when it does, it really does. One of the recent great examples of the way the Roller Derby community can band together to support itself is the Derby Without Borders Project, which has been working to supply resources to Roller Derby leagues in need since last year. As the project continues, we caught up with founder Mae Dae to find out where the project came from - and how you can help it to continue to help Roller Derby everywhere. 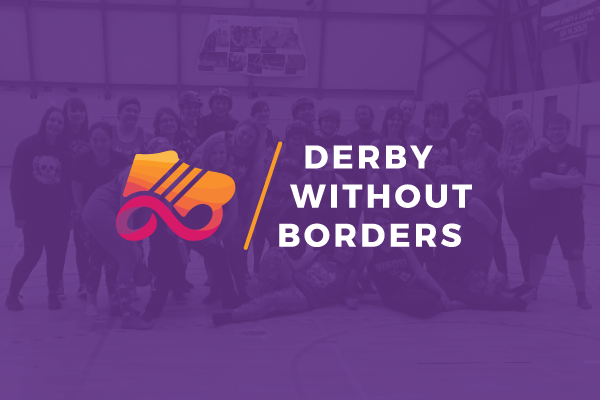 So, for people who don't know you: let's start with "who's Mae Dae, and what is Skating Out of Bounds?" Well I’m 28 years old and I love roller derby. I first started skating with a small league in Northern California, Sonoma County Roller Derby, in 2014. In 2017 I left my league, and home, to go on a back packing trip through Europe. I knew I couldn’t possibly live without derby in my life so I brought my skates with me. Skating Out of Bounds was originally a blog about my travel and derby experiences elsewhere. Mainly it was for my friends to read. I also would send people little care packages from different places I visited through the site as well. Since then, it’s evolved into something entirely different. I’ve actually deactivated the blog even, because it doesn’t feel relevant to it’s purpose anymore. What we're here to talk about is something which started as a spinoff of Skating Out of Bounds - the Derby Without Borders project. I think the idea first came to you at the 2017 WFTDA World Summit in Manchester, so can you talk us through the background? Sure, at the Summit there was a panel of skaters from what were identified as “emerging regions” in derby. They all discussed different struggles they had with making derby accessible in their own leagues. One of the struggles that was universal was that for varying different reasons they all struggled with getting skates and protective gear. This is a huge barrier for the sport to grow in these areas as it can be so discouraging to wait months for skates to arrive. It was sort of a lightbulb moment and I chatted with several of the panellists after to see if they would somehow be interested in receiving some donations if I could get some together. I also chatted with Master Blaster there and she thought it was a great idea. I told her about my blog and travels so she said to come by her shop in Berlin and we could make it happen. She was the first of several people to believe in my idea, and well the rest all kind of fell into place. Derby Without Borders' first "concrete goal" was to provide kit to support Sailor City Rollers in Argentina - for which you ran a GoFundMe , as well as a stall at RollerCon. What was the support like for the project at RollerCon? I wasn’t even expecting to have a booth at Rollercon to be honest. But I figured if I didn’t ask I wouldn’t so I emailed to see if they would be ok with me having a booth. I was so excited when they told me they’d donate a space to me! I think the support was great, people who heard about the project were happy to help and we got a considerable amount of donations. I struggled to get the information out to enough people ahead of time so there were a lot of people who had said they wished they had known sooner and they would have brought more donations with them. Did you have any unexpected help, or setbacks? My neighbouring booth at Rollercon, F Yeah Printing, were so sweet and we made good friends! They have been so supportive since then and have offered a fundraiser through their printing service, [link] where you can buy Skating Out of Bounds and Derby Without Borders merchandise and a portion of the proceeds go to helping fund the project. They’ve also been really helpful with sharing social media posts about the project which is a lot more helpful than people think! I wouldn’t call them setbacks, but definitely some big learning moments. I had a bit of a mix up with travel plans at the end of Rollercon and had to leave mid day on Sunday. Which meant packing up the booth early. I didn’t think about it at the time, but of course, everyone wanted to leave donations at the end of the event. So even though the booth was packed up people still left quite a few donations behind. I definitely changed my approach for the World Cup booth because of that. Following up on that, the project's next appearance was at the Roller Derby World Cup 2018, back in Manchester. As well as passing on the kit the project had collected for Sailor City to Team Argentina's skaters, you extended the project to a huge number of other teams - can you tell us a bit about the current beneficiaries, and how they were selected? Sure! So I already had a contact with Golden City [Johannesburg] in South Africa and knew that Team South Africa would be at the World Cup so it made sense to collect for them too. Everything we collected at the World Cup went with them, and the Rollercon donations got passed on to the Team Argentina skaters from Sailor City. All the other beneficiaries have been through word of mouth for the most part. Either friends of mine have mentioned a league somewhere and I’ve reached out, or leagues in need have heard of the project and reached out to me directly. Our list keeps growing. 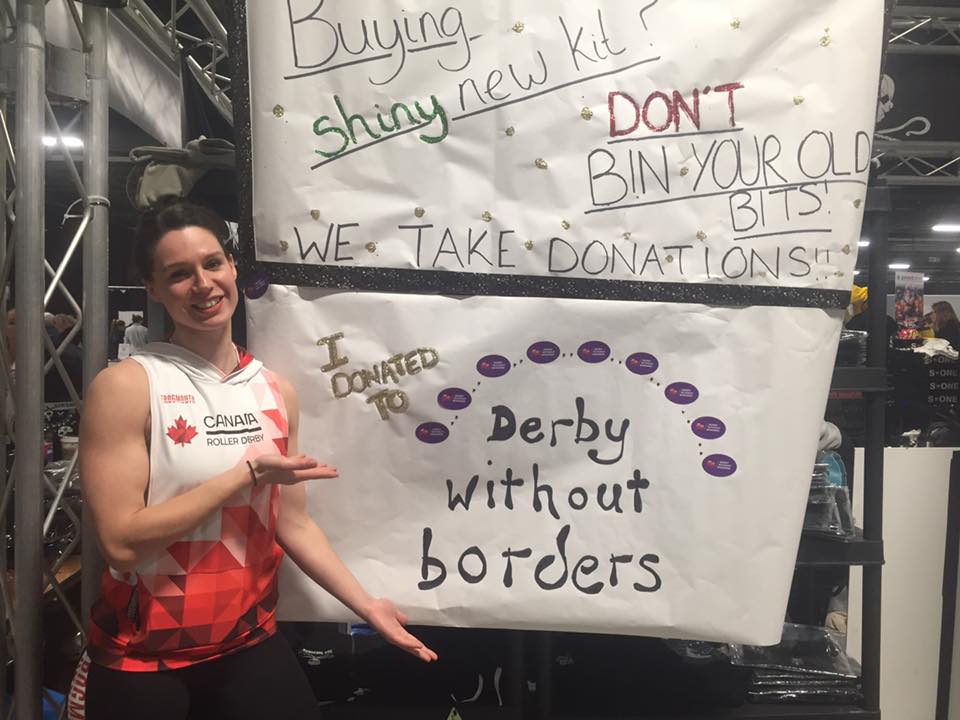 Team Canada's Miracle Whips hanging out by the Derby Without Borders stall at the Roller Derby World Cup Running Derby without Borders must be a big logistical task. Can you tell us who is currently involved in the project with you? I would be completely lost without all the help I’ve gotten so far. I’ve had tons of friends help out in all kinds of ways. Two of my former league mates, WiFly and H.A.M. Slice, helped design my two logos, and I had amazing volunteers at both booths. My two closest friends, KT Wrecks and Leethal, have also been amazing cheerleaders and sounding boards for the project since it started. I also had to work out some serious logistics for getting the Rollercon donations from my storage unit in California to Manchester for the World Cup. That was a combination of a good friend, Wicked Lizard, driving my donations to an event she was reffing at and Pia Mess, who would be coming to World Cup, picking them up from her and then me paying for an additional checked bag to get them there. Totally doable, but a lot of figuring out! One of my closest friends in London, Jem, has been a cornerstone for me since re-igniting the project here. She’s helped out a lot with planning, the booth at the World Cup, helping transport donations and being supportive of the project even when I feel like giving up. My current league mates at London Rockin’ Rollers have donated tons of items and quite a few volunteered at the World Cup. I’ve been so grateful for the support of Master Blaster and Smarty Pants. They’ve both been really supportive and have offered several resources throughout the whole project. Both Quad Skate Shop and Strong Athletic have sponsored the project in some way. Smarty also connected me with Sisu mouthguards and we were able to get a new mouthguard donated for every set of kit we got at the World Cup. Quad Skate Shop helped collect donations and sent them to the league in Beirut [Roller Derby Beirut]. During World Cup they offered a discount at the shop, if you donate an old item you get 10% off the new one, so bring in old wrist guards get 10% off your new ones. Smarty has been working with me on several ways to make the project more accessible too. We started a league sponsorship program where her league did a collection and sponsored the shipping to the league in Cairo [CaiRollers]. Jes Rivas has also reached out about supporting the project with donating some of her old items since she’s now retired and helping with social media blasts. I’ve also connected with Double Threat Skate Shop in London and they’ve donated items and are continuing to collect items for the project. I’m so thankful and inspired for all the support. Do you see Derby Without Borders growing bigger with time? Absolutely. I think with a little more time and some work it can become something great that helps support people in the sport and increases accessibility. What's your "vision" for the project - do you want to support emerging derby in other ways, beyond just kit? If I had absolutely no boundaries on how the project could grow I would love to see it develop in the following ways: Continue to get kit to beneficiaries Sponsor experienced Coaches to host bootcamps for beneficiaries Host roller derby after-school programs A scholarship fund to get individuals from beneficiary leagues to large scale derby events such as Rollercon, Camp Elite and so on. If people want to help out with Derby Without Borders, how can they help out? Anything helps. At the moment I managing the whole project, but my skill set does not lie in logistics. The biggest things I need at the moment:

What kinds of items of kit are most in demand - and how second-hand is second-hand? Definitely skates. Most people want to sell old skates to help offset the cost of buying a new pair, which is totally understandable. But skates are also the hardest thing for people to access. Second-hand: meaning it has to be still safe for people to use. I’m not interested in putting people at risk. I always ask if helmet donations have taken any impact and don’t take helmets that have. As long as pads are relatively usable, even with some tape, I’ll take them. If you don't have kit to donate, how else can people help out? The biggest ways people can help are donating time, money or publicity. I can definitely use volunteers in a number of ways, both here in London and digitally from anywhere. Financial donations help cover shipping costs. Simply spreading information about the project is really helpful! If you do want to donate to Derby Without Borders, you can do so via their website or Facebook. Donations of funds can be made via the store at Skating Out Of Bounds: SPONSOR A LEAGUE  Mae Dae and Derby Without Borders can be contacted to offer other kinds of help via their Facebook page.