For our third important, but easily missed, tournament this year, we're heading north to Colombia. In common with Brazil and Mexico, Colombia began large scale national series relatively early.  From 2012 to 2014, a Colombian National Tournament was organised, awarding wins to Bogotá's Rock N Roller Queens and Bone Breakers. Since then, however, things have been less consistent: whilst there has been a "Western Region" tournament every year since (the Torneo Regional de Occidente ), and a "District Tournament" for the huge number of teams in the capital of Bogotá (the Torneo Distrital Roller Derby ), there was not an overall National Championship in 2015 or 16. Since 2017, however, things have been getting more on track, with Bogotá Bone Breakers winning both the 4th Distrital (for qualification), and the resulting Torneo Nacional in mid-November, the first since 2014, to take the overall Championship for the year. The previous Championship set up continues for 2018, and we're already deep into the Qualifying Tournaments, so there's plenty for us to catch you up on. Due to the uneven distribution of teams across Colombia, the two qualifiers have very different geographical extents - although they have similar numbers of eligible competitors. From each qualifier, the top three teams are then passed onto the Championship itself, to play for the cup, so that six teams play overall. Of the teams competing this year, the two most experienced are Bogotá's Bone Breakers (Bx3), who date back to 2009, and fellow Bogotá based team, Rock N Roller Queens, who date from the same period. These two are also the only WFTDA member leagues in Colombia - with the Queens having joined as early as 2013, and Bx3 waiting until 2016. Before and after WFTDA membership, both leagues' A teams have always been well travelled within Latin America (for example, attending several of 2x4 Roller Derby's Violentango tournaments in Buenos Aires). Outside Bogotá, Manizales' Valkyrias are easily the oldest team, founded in 2010 as well. Valkyrias have also travelled fairly widely in recent years, having attended the 5th Sailor City Rollers hosted Piratas en el Asfalto tournament in 2017, also in Buenos Aires. At the other end of the scale, we believe that Bogotá's youngest team in the tournament is Fugitivas Roller Punk, founded in 2016, whilst Cali's Silver Lynx Roller Derby are probably the youngest outside the capital region, dating from 2015.

The most geographically distributed Qualifier is the Torneo Regional de Occidente, covering the entire West of Colombia. (The East of Colombia has a very low population density, being mostly covered by those parts of the Amazon rainforest in the Colombian borders). This year's tournament, the 6th, was hosted by Medellín's Spring City Rollers, from the 9th to 11th June as a single event - a round robin tournament with 5 competitors. Valkyrias Roller Derby, of Manizales, gave a very impressive performance, taking the top of the leaderboard, just above the hosts Spring City. Silver Lynx Roller Derby, and Bucaramanga's Pink Sucks Roller Derby, were unable to prevent Violet Attack, of Ibague, from taking the third qualifying spot. This is a significant improvement in Violet Attack's performance from last year, although the absence of several teams from the tournament may have helped them. From the results available to us, it appears that Valkyrias have significantly improved on last year, with only new-this-year Spring City causing them any particular challenge. (We've been unable to source complete scores for the tournament, however, so we can't be certain about the relative strength of third place holders Violet Attack.) 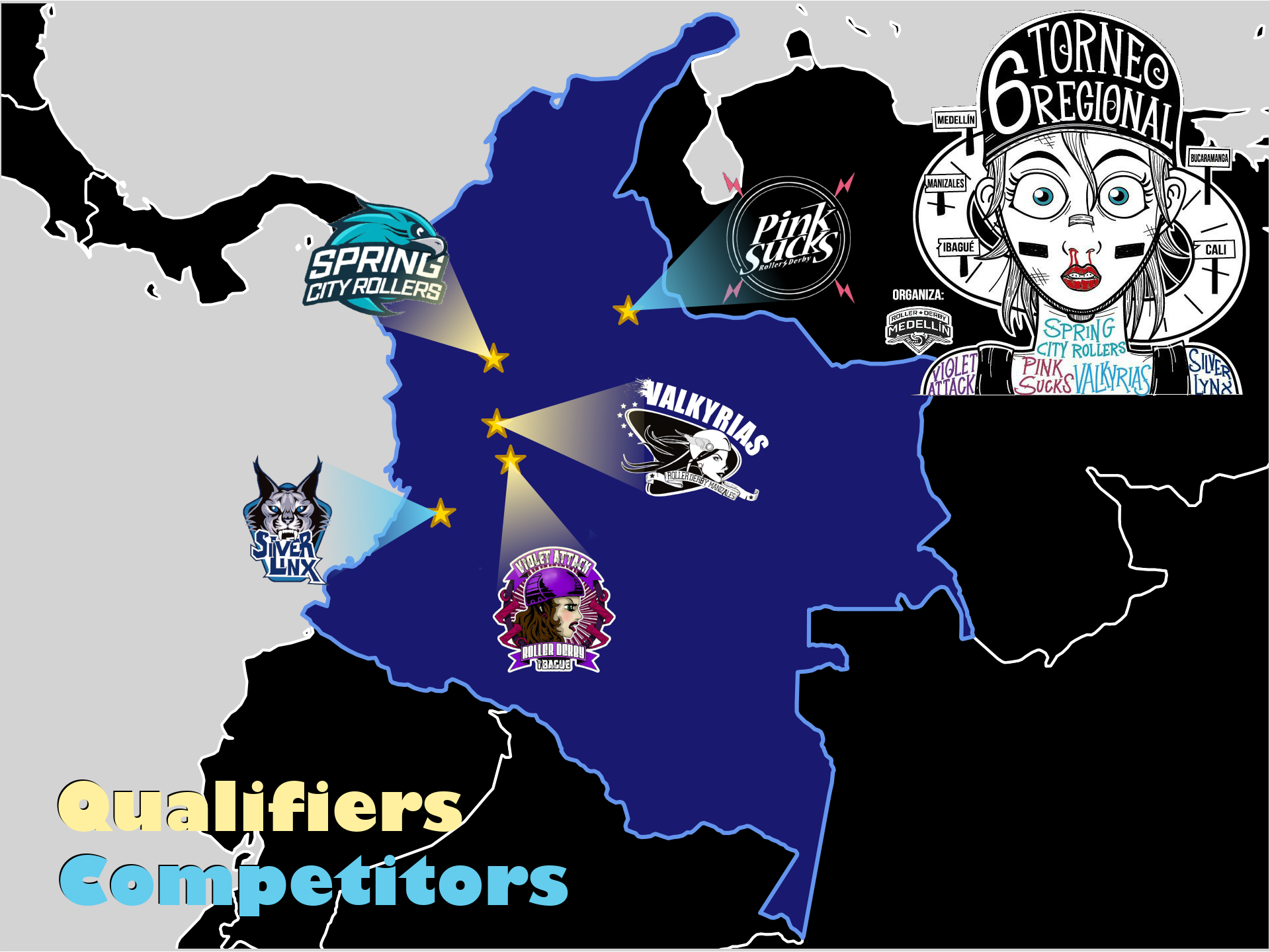 The second Qualifier, the Torneo Distrital, is centred entirely on the large capital city, Bogotá, and run as a round-robin with multiple fixtures throughout the year. Last year's District tournament was a huge affair with multiple divisions, and a packed structure (each fixture was a triple-header to accommodate all the teams). This year's Distrital, the 5th, is a much more compact affair, with all of the "B" teams, and the men's derby division, removed entirely.  Instead, the five big leagues of the capital area are all competing with their A teams only. After the first round of play, the current standings in the Distrital are: This is also the ordering of the same teams at the end of the last National Tournament, so we're not expecting any particular upsets going forward. The final phase of the tournament, in this year's design, will see the top 4 seed into a slaughter-pairing elimination tournament, to decide the winner, second and third places. As such, it is impossible for the Fugitivas to qualify for a top 3 position, and thus impossible for them to qualify for a place in the Torneo National this year. 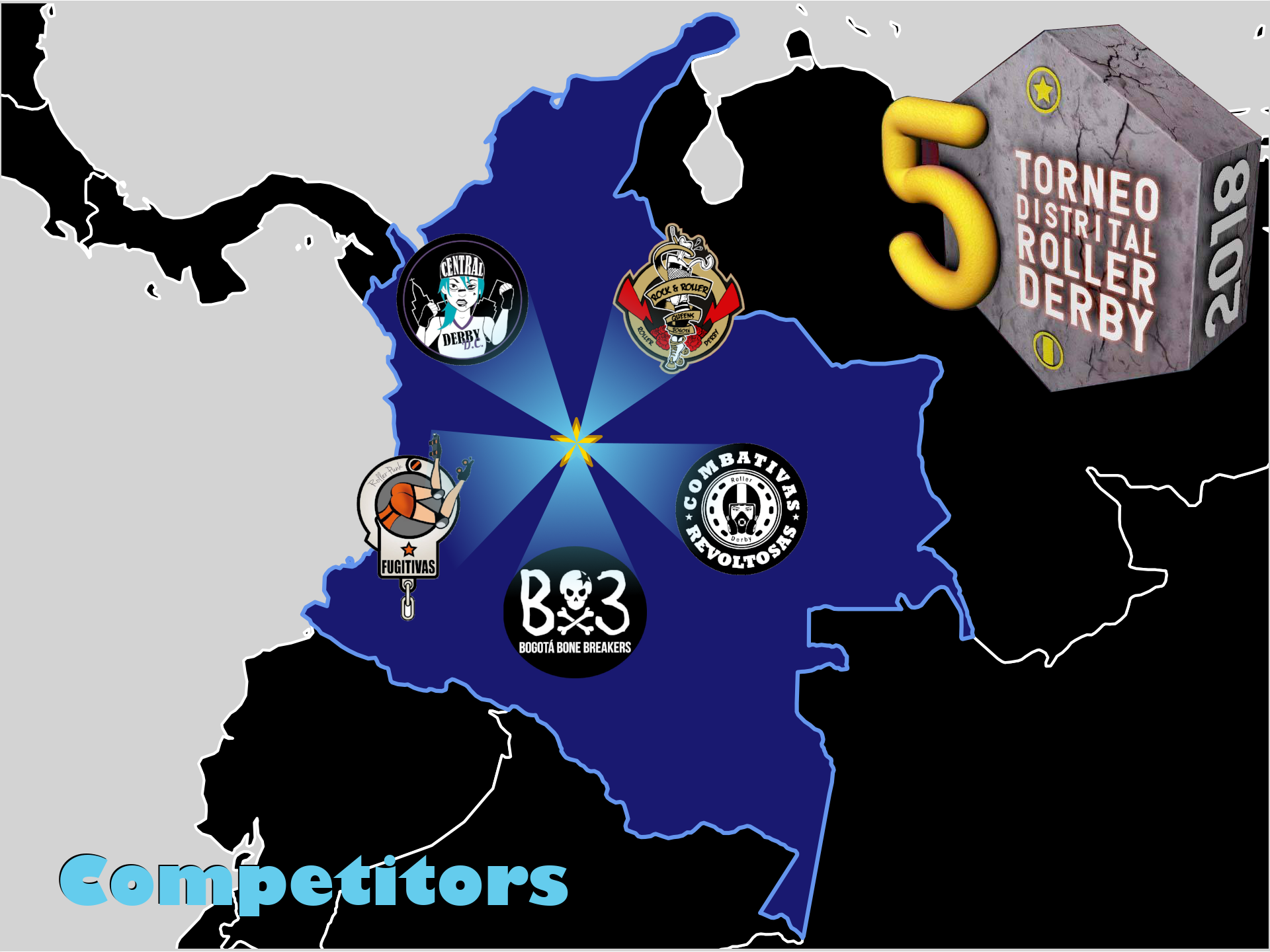 The 5th Torneo Nacional will be hosted, in November 2018, by the Valkyrias, who gained the rights by qualifying first in June. There is no precise date announced yet, although we'd expect around the second week of the month, based on the previous tournament schedules. This is the first time the event has been held in Manizales, with three of the last 4 having been hosted in the capital, and the other (in 2013) in Medellín. There are guaranteed changes to the finishing order from 2017, even at this early date: the three Regional teams qualifying this year are entirely different to 2017 (when Pink Sucks, Ibague's Pain Dealers, and the Titanias of Cali were the qualifiers). Even so, the SRDRank ratings for the current top 3 Distrital division teams are all noticeably higher than those for the Regional qualifying teams (we place current-4th-position Central Derby D.C. as competitive with the Valkyrias, at last estimate).  All four previous Torneo Nacionals have seen the same top three teams, in fact, with various combinations of Bx3, Rock N Roller Queens and Combativas in each position; although for the first time last year, the Rock N Roller Queens were relegated to third place. It is possible, then, that this could be the first year that the Valkyrias - who have the best form of any of the Regional teams - might make bronze, especially with home team advantage! Particular thanks to Central Derby D.C. Roller Derby for their assistance in writing this article; and to the 5th Nacional hosts, Valkyrias.