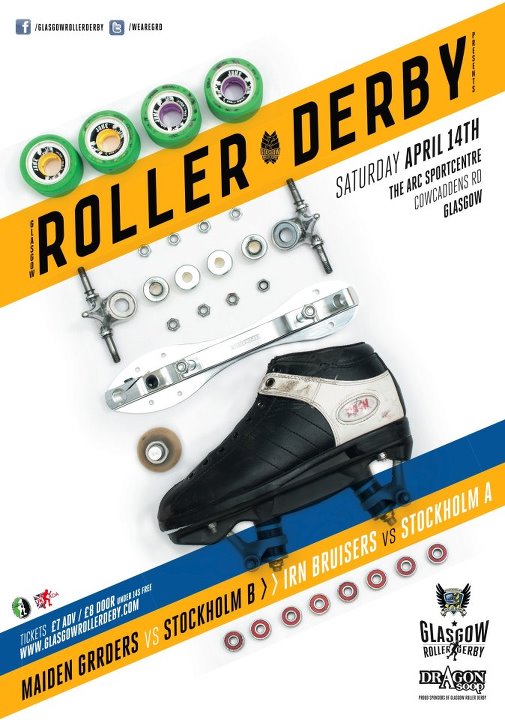 Glasgow Roller Derby host a double-header against Stockholm Roller Derby at The Arc,Cowcaddens Road,Glasgow on Saturday the 14th of April.Entry is £8 on the day or £7 in advance,under 14's go free.Doors open at midday. First up will be the Maiden Grrders against Stockholm B,followed by the Irn Bruisers versus Stockholm A,this is bound to be a busy one,so get an advance ticket if you can to avoid disappointment. 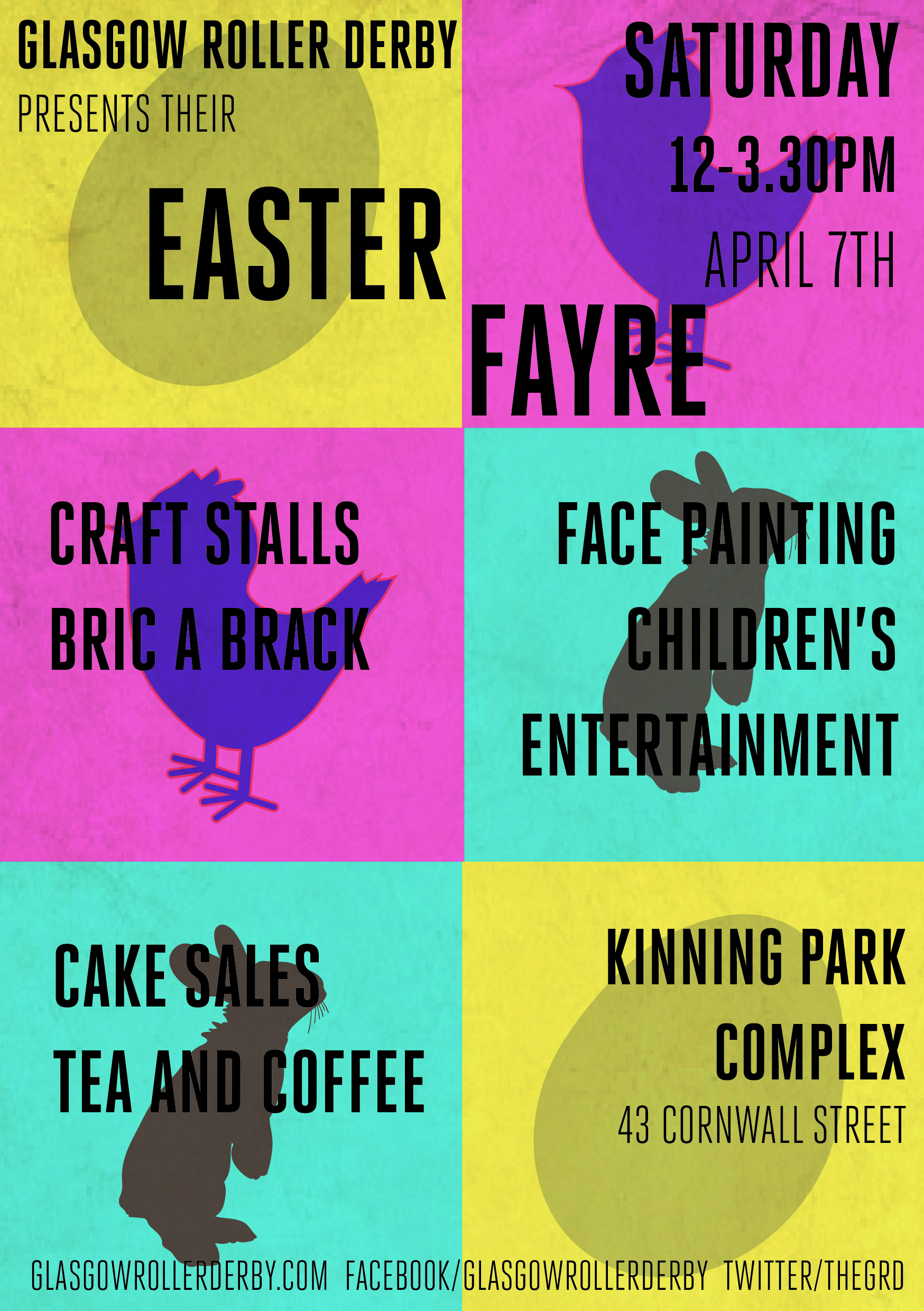 Glasgow Roller Derby have an Easter Fayre for your enjoyment this weekend,it's at the Kinning Park Complex,Glasgow,starts at midday,so get along and support your local Derby league.

After the success of their Springtime Craft Fayre last year, Fierce Valley Roller Girls will be treating you all again to a hand-made, home-grown Craft Emporium! The event will be held in The Masonic Temple in Falkirk on Saturday 28th April from 12noon – 4pm, and will play host to a fine selection of around 20 local arts & crafts stalls. Scotland’s first Junior Roller Derby league – Fierce Valley Roller Cubs – will also be there to share their future plans and answer any questions that kids (and their parents!) may have about the sport.

The Fundraising team at FVRG have pulled out all the stops to make sure there will be something for everyone at The Emporium. The crafters will be offering a range of handmade goods from jewellery, to greetings cards, to scarves, and even corsets and ‘skatergirlz’ art work. 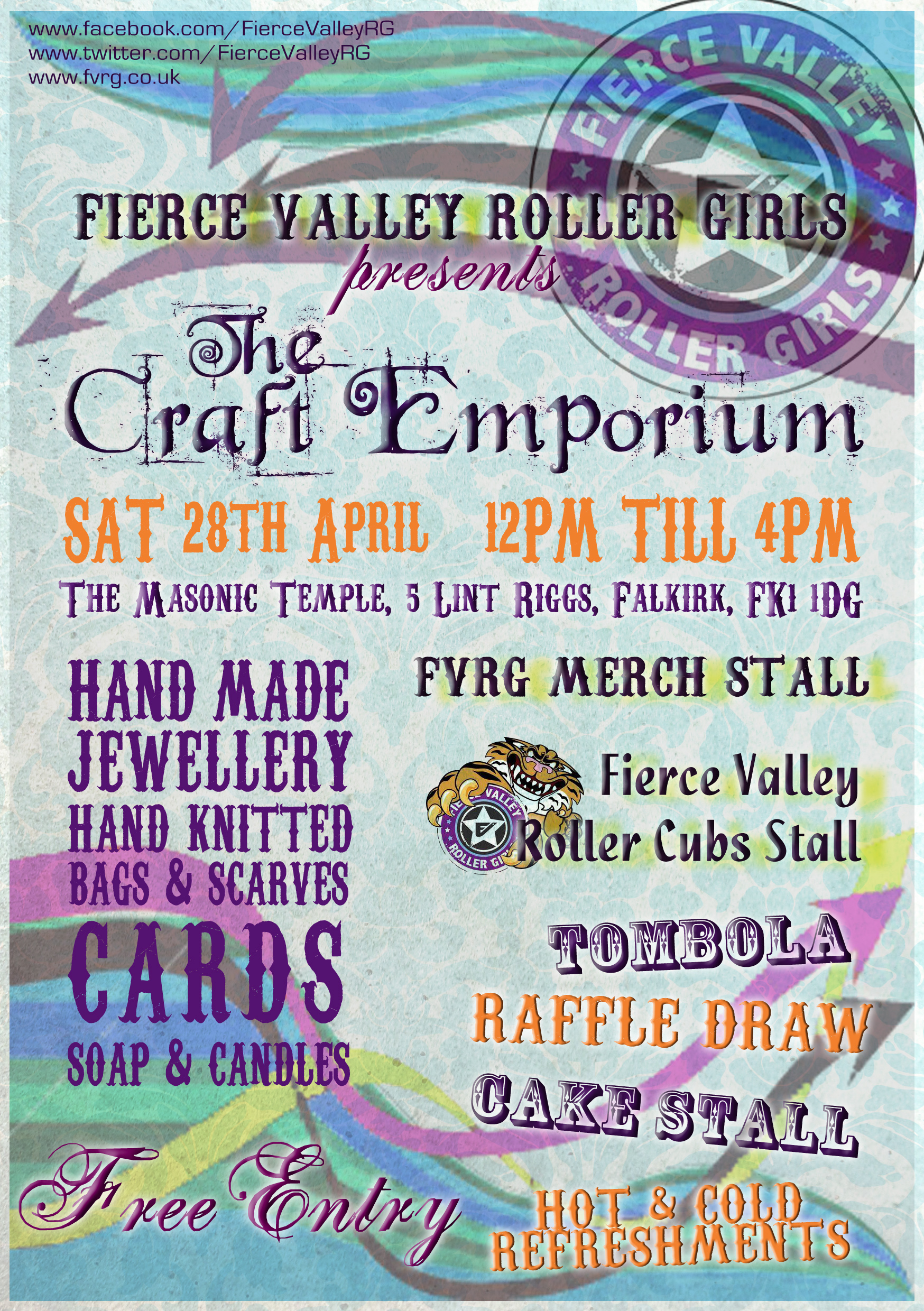 There will be an elaborate bake sale for the sweet toothed, with tea and coffee also available. If you’re feeling lucky, then why not buy a raffle tickets to be in with a shot of winning vouchers from LMG Hair & Beauty, or a set of books from Litlist Book Shop, or lampwork jewellery from Scarlett Impressions or Flaming Eck?

So what's it all in aid of?

As well as keeping you entertained for the afternoon, proceeds from the FVRG stalls at the Craft Fayre will help fund Fierce Valley Roller Girls team, ‘Parma Violents’, in their next bout. This will only be their second public outing, and they will be playing away against Belfast Roller Derby! For such a young league, going to Northern Ireland to represent Scottish Roller Derby is a huge opportunity, so all support received to help fund the trip will be hugely appreciated.

To keep up with the latest Craft Emporium news or to be tempted by the latest raffle prizes on offer, take a look at the Facebook Event, or look out for our skaters on Falkirk High Street on the day – you’ll not miss them! 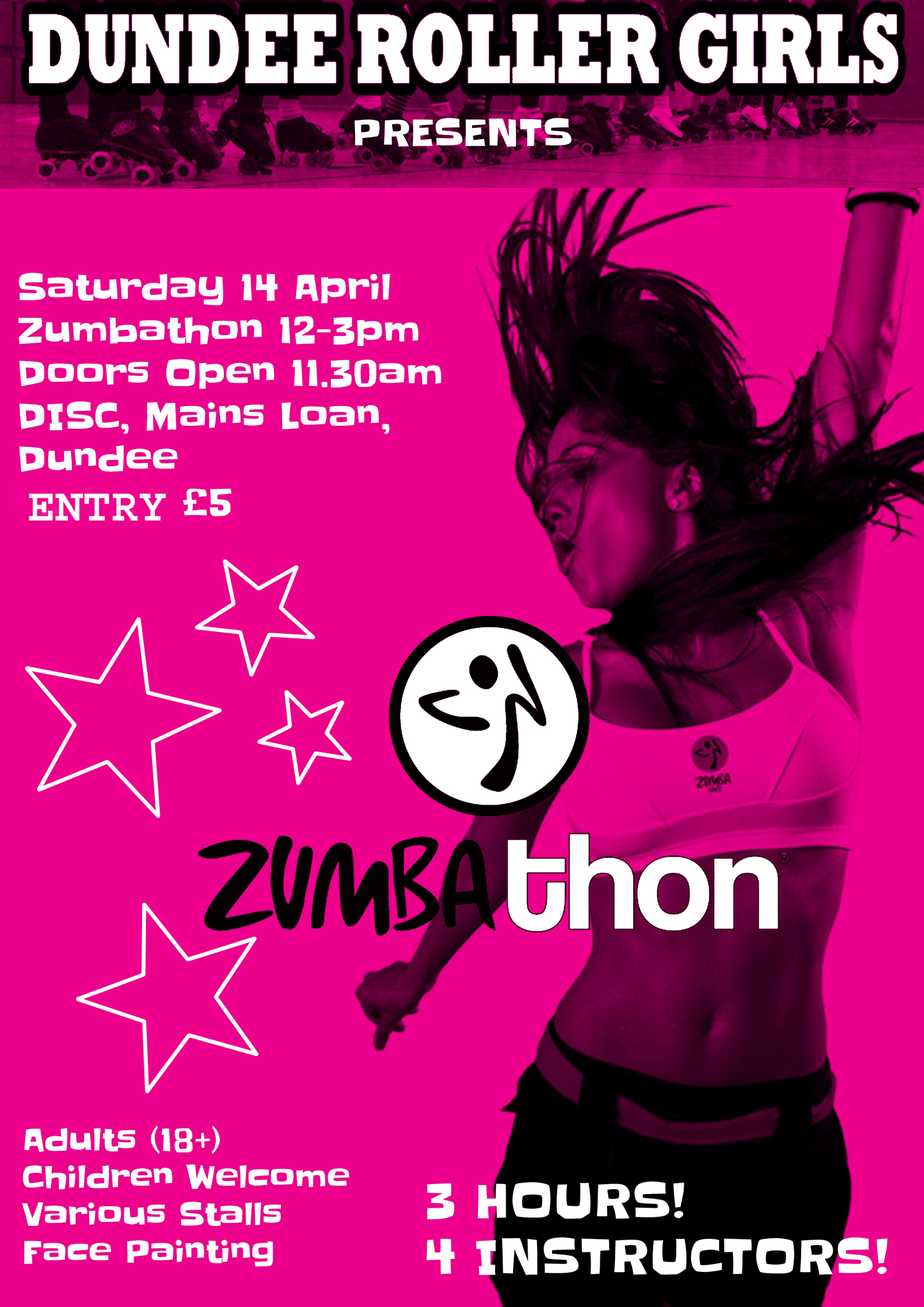 We have four instructors coming - to be announced shortly!

Various stalls will be in attendance including Virgin Vie,  The Body Shop, Partylite and many more!!

Adults (18+) may participate but children are welcome to watch too, there will be face painting on the day too!

The Dundee Roller Girls are looking for a new team logo.

Designs will ideally: Reference Dundee Have our full team name, Dundee Roller Girls. Consist of no more than three colours, the main colour could be either pink, black or silver. Black and White designs also welcome.

The image must have block colours suitable for screen printing.

The winning designer will receive a free team t-shirt (with new logo) and free entry to our next home game of their choice.

Looking for inspiration? Check out other UK teams logo’s at http://rollinnews.com/uk-roller-derby-teams/

Competition is open now and ends 12pm on Saturday 14th April 2012 Entries can be submitted to dundeerollergirls@gmail.com

The winner will be notified no later than Friday 20th April Any queries please contact us on the above email address.

Copyright of the image will be relinquished to the Dundee Roller Girls. 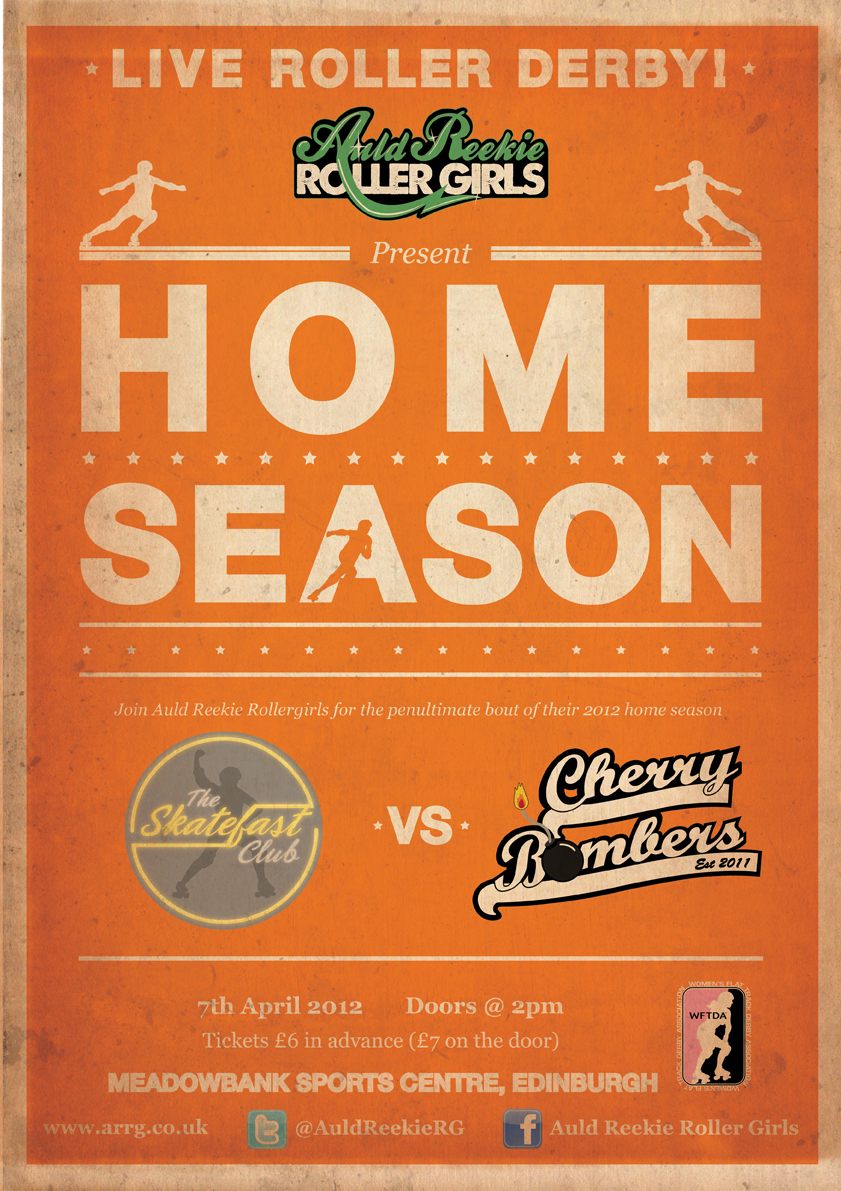 The third installment of the Auld Reekie Roller Girls first Home Season rolls around with a bout between the Skatefast Club and the Cherry Bombers. With ARRG's third home team,the Leithal Weapons winning both their previous encounters,this bout will decide who they play in the final at the end of April. The bout takes place at Meadowbank Sports Centre,London Road,Edinburgh on Saturday the 7th of April.Entry is £7 on the door ,or £6 in advance.Under 14's go free.Doors open at 2pm 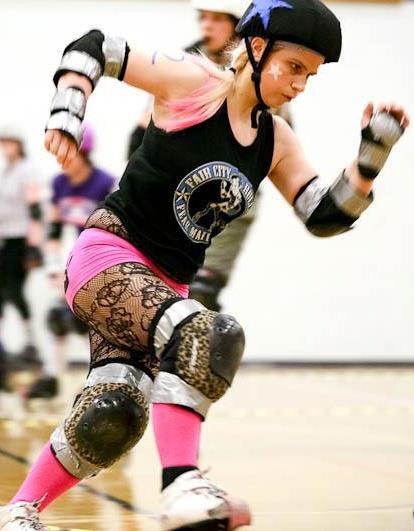 Hot off the heels of their recent bout against ARRG's Cannon Belles, Perth's FCR will host a recruitment night and scrims session.

Tomorrow night (Tuesday, March 27), the Fair City Rollers will hold their Fresh Meat recruitment night, open to women over 18 who want to join the team, and men over 18 who would like to referee. There isn't even any basic skating skills required, so even if the last time you were on skates they had My Little Pony on the side (like mine when I was youngster) you can come along and give it a try.

The Fresh Meat session will be held in Bell's Sports Centre from 7pm to 8pm. Anyone interested in coming along should email faircityrollersrecruitment@gmail.com so that the league can bring along their spare kit.

And immediately after Fresh Meat, FCR will host an open Scottish mixed scrims, where some of the best skaters from around the country will meet and play together. Scrims will be held between 8pm and 10pm.

FCR chairperson Terryfying Tink said: "It's a great opportunity for skaters from all scottish leagues to get together, to learn from each other and have some fun."

FCR hopes to see lots of skaters there!! 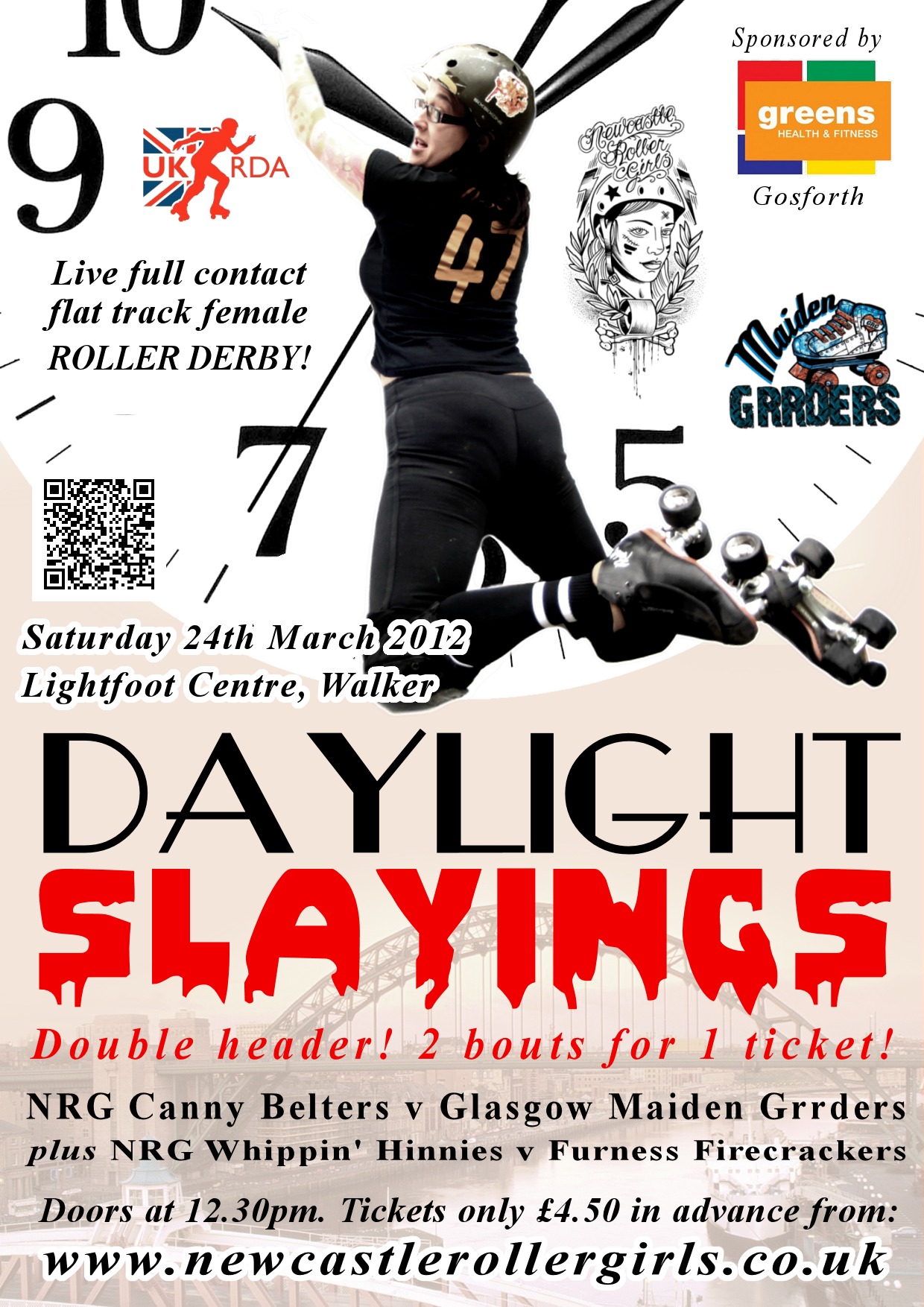 Glasgow Roller Derby travel down south to take on the Newcastle Roller Girls on Saturday 24th of March.It's a double header with the first bout being a contest between NRG's,Whippin Hinnies and Furness Firecrackers,followed by the main event,GRD's Maiden Grrders versus NRG's Canny Belters.The bouts take place at the Walker Activity Dome Wharrier Street,Newcastle.Doors open 12:30,first bout at 1pm.

Monthly Diary of a League: Nasty Nessies in March: Bee-Yatch

Posted: by aoanla 2012-03-21 12:20
Tags:  interviews monthly diary nasty nessies roller girls nnrg
Back on our normal schedule, this month's Nessie to be interviewed is the apian Bee-Yatch! 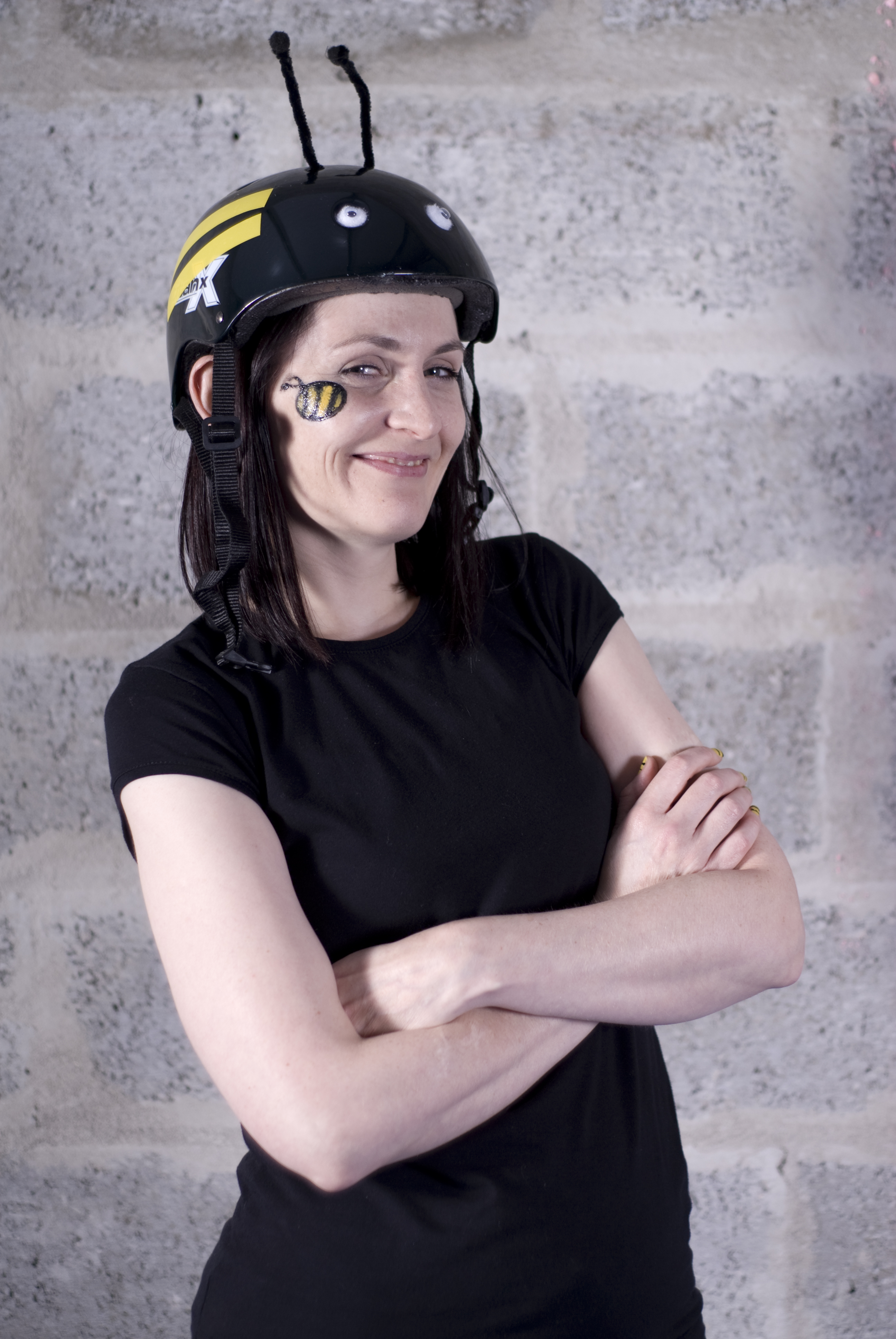 I hadn't heard of Roller Derby (yes I know, I lead a sheltered life!) before seeing 'Whip it', after watching I cursed living in Inverness where we never have anything decent to do and what do you know, a couple of months later it appeared in a local mag. I am not really a sporty type and RD just appealed to me because it looked such fun and a good way of getting fit without having to wear a leotard or running shoes!

Derby names are an important aspect of the sport, especially when\you're starting out. How did you choose your name, and how does it reflect your personality on track?

My name was the result of hours of err well, nothing! I could not think of any names that I liked or suited me, my hubby was coming up with some crackers but I am not sure my team mates would have liked shouting them out on the track! I ended up coming up with Bee-Yatch and obviously its a play on 'Bitch' but I actually play more on the Bee aspect as I wear yellow stripey socks, my helmet has Bee stripes on it and I can be a little 'stingy' if necessary!

My biggest difficulty was making my legs and feet do as they were told! I felt a bit like Bambi but in time have manged to overcome that (just!). I also had the concern that I was going to spend a lot of money on the initial gear layout and then might end up not liking it but thankfully that hasn't happened.

Lots of roller girls find it hard not to spread the word about theirnew sport. How have you been spreading the word?

I talk constantly about RD to anyone who will listen, in fact they don't even have to listen as long as they pretend!! ;-)

What’s the most important thing you’ve learnt/done this month?

Endurance, endurance, endurance...and it really works. We have been putting a lot of effort into the basics and it has paid off. Personally I think it really helped me and got me through my 25 in 5 as without it I would never had made it within the time.

What were the most difficult and best things you’ve done?

For me getting over the nerves of being in a pack situation was quite difficult, I tend to over think things and wondered how I would ever get the nerve up to be able to get through a pack. Now when we do it I still get nervous but I use that energy to spur me on and I don't even think about what my feet are doing which is great. The best thing is being part of the team, we all help each other and encourage each other and everyone on the team wants NNRG to progress and become a team to lookout for.

We have a couple of girls who are almost passed their MINs which is fantastic, we are also recruiting fresh meat and have had quite a bit of interest so hopefully we will be expanding again pretty soon. We seem to have come really far in the last 2 months and it feels great.


Next month's Nessie to be interviewed will be Marge Mallow. In the meantime, previously featured skater Cherry Bow has suffered an injury, and decided to use her extra time recovering to write about her progress. You can read about it here. 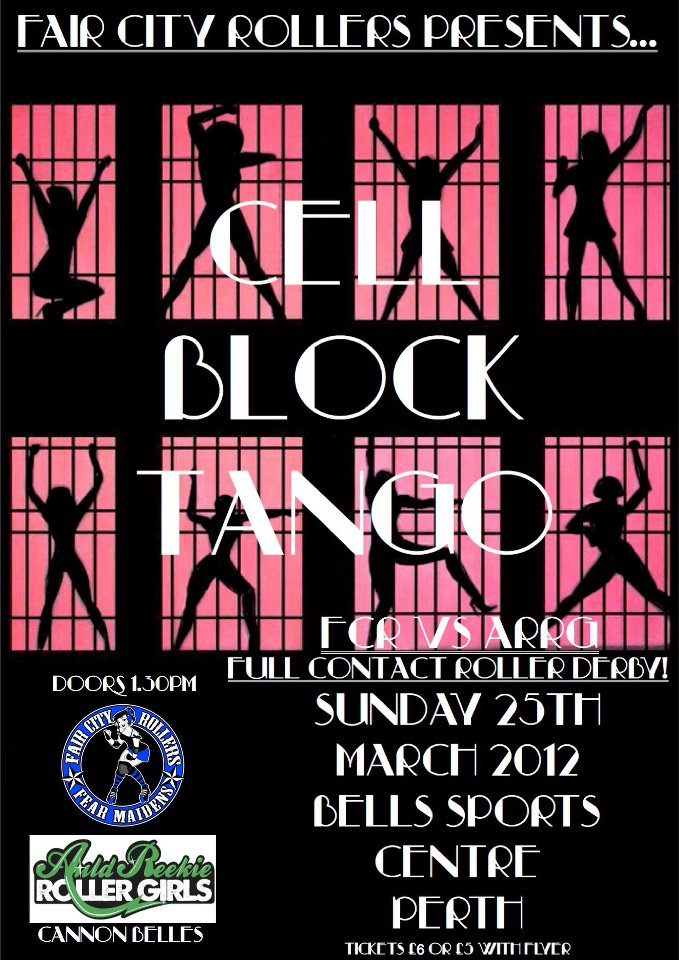