An interview with Cherry Fury 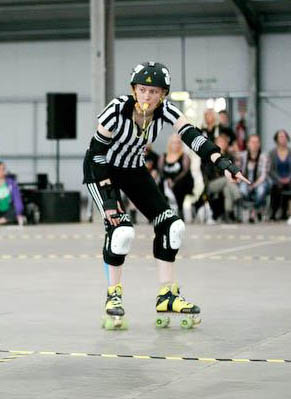 We are always interested to hear from the skaters, but what about the refs? They make up an integral part of any team/bout and are sometimes left in the dark. I caught up with Cherry Fury, one of Scotland's most travelled referees to pick her brains...

Did you always go into roller derby with the aim to become a ref?

In all honesty I began roller derby to get involved, simply to get involved. I found the prospect of a new sport exciting and the opportunity to be part of a team was something which I relished. It is true that I began skating on the team; I’d say it was a straight forward choice as that’s how I took my first steps back on skates after a few years. After around 18 or so months I had a go at refereeing after discussing it with Ella Bella Bang Bang and it just stuck. Officiating is a critical part of the sports development. Skaters need officials as much as officials need skaters and a wee bit of ground to roll around on. What do you think makes a good referee?

Firstly I’d say time. We all have to learn and practice, it’s very difficult to become a referee. It takes a lot of time and commitment to develop. You have simply got to training as much as you can, push yourself, get involved with as any scrimmages and bouts as possible and be very frank about your strengths and weaknesses.  The strength to take feedback, self-assess and appreciate the support that’s given to you and the support you must give to others. Finally I would say respect, you never throw a fellow official under the bus, we all make mistakes and seek the elusive perfect bout but to achieve that would leave us with little to learn and I don’t believe in that.  We are called a ‘crew’ for a very good reason as working together is fundamental to a bout being well officiated including those on and off skates.

Do you have any referee idols? Is there a particular referee that you look up to or go to for advice?

I have a huge amount of respect for officials in roller derby, skaters too as we all make our sport what it is today. I have been very lucky to work with some of the strongest and most knowledgeable officials in the sport, both in Europe and the USA and I look to everyone I work with for feedback or advice.

If you were to twist my arm for a few, first up would be Ella Bella Bang Bang (ARRG), this lady is truly inspirational and is the reason I became a referee. She is supportive and constructive with incredible determination to support everyone she works with. Miss Trail (NYSE) really impacted the style of referee I have become. Her calmness and knowledge of the sport is incredible. I admire her development work with the MRDA and always to aim to live up to her standards.

There really are too many to mention and I don’t want to leave anyone out but, I always learn from every bout I officiate and every official I work with. Officials are constantly discussing rules, debating changes in the game and pushing the boundaries of our knowledge. We support and push each other which are a real credit to all the individuals involved.

You are quite famous among the roller derby community for your small reffing pants, but recently I have noticed that you have been covering up a bit more. Is there a reason for that?

Hahaha, yes the pants. I don’t really have a specific answer. Yes, the WFTDA tournament protocols have an officiating dress code but that doesn’t affect most games I skate. I have some very good compression tights which help me with my leg and you’ll notice I wear those under my pants. Maybe the fact that 80% of my ref photos on Facebook are of my bum, makes getting a good headshot a nightmare, but again I’ve never received any complaints. I do have a black pride of scotland kilt for thr world cup which  i love to skate in now too.

If and how have things changed since you became a ref ?

Our game is constantly changing, from rules development to the skill and ability of skaters. I believe in supporting the sport and accommodating it as it develops. The most notable thing for me is the technical level to which teams are applying and bending the rules. As an official you need to have exceptional knowledge of the rules, protocols and how those are applied to the game. Teams really are pushing the boundaries of what can be done within the rules and it is up to the officials to develop and keep ahead of that curve.

What's is your greatest achievement in your reffing career?

My greatest, wow, well that’s a tough one as there are so many things and so many bouts that I have been part of which I am proud of. I’m working towards my certification and if I achieve that ill be over the moon but so far if I had to pick one it would be being selected to ref the MRDA championships in New York. I am a huge fan of the men’s derby and  have a huge amount of respect for the men’s teams both in Europe and the USA.

You've been one of the more widely travelled scottish roller derby referees. How does it feel to be refereeing at the first World Cup?

Its fantastic! I get the opportunity to work with some amazing officials, see some fantastic skating and just being part of the first derby world cup ever is awesome. In all honesty knowing that there is a Scottish team amongst a fantastic range of European teams and two Scottish Refs among a crew of excellent European officials representing European derby at the event makes me proud of everything that everyone in European derby has achieved.

2.2.2, it’s the prime directive that keeps us rolling.