Monthly Diary of a League: Nasty Nessies in October: Irn-Bruzer

In the first of a monthly series covering the progress of Scotland's newest league, Nasty Nessies Roller Girls, we have their committee's choice for interviewee, chair Irn-Bruzer. Nasty Nessies are based in Inverness, and have a strong team-based administration. They advertise that they have members of all shapes and sizes, but every one of them is full of determination... 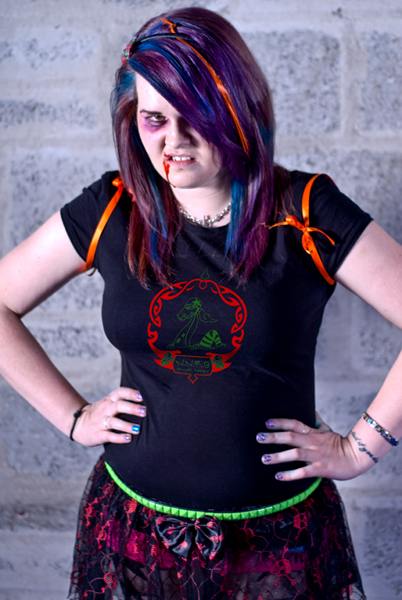 How did you first encounter roller derby? What was it about you that attracted you to it?
I have always enjoyed skating (I used to be an inliner, ssshhhh) then of course I watched Whip-it and was hooked! A friend mentioned it may be coming to Inverness and I made sure I was joining up! I love the speed and contact part as it’s a great way to let off steam and stress. I love being part of something alternative and the great team spirit.

What was the biggest initial difficulty you faced when just starting out?

The only difficulty I found was to afford the kit to start, but now I have it, it’s full steam ahead!!

How have you gotten the word out about your new league?

My friends and family think I’m mad, but to be honest, that’s no surprise to them! We have been talking to everyone we meet and shouting from the rooftops about the team and the sport in general. We have posters up around town and had great feedback, also I am a devil on Facebook, I add everyone and send them messages promoting us.

What's the most important thing you've learnt this month?

Probably the most important thing has been to make sure we all work as a team and communicate thoroughly. Deal with any issues that arise and listen to my derby sisters. I'm part of a strong team, not the leader!

And the most difficult and the best?

The most difficult thing has to be bloody T-stops, I still can't do them properly; I prefer hocky stops or plows. The best thing? Amazing myself by doing speed trials: my lap time is 10.2 seconds a lap! Also, I love jumping over my derby-wife!

Finally, who's up for next month?

In a regular part of this feature, we'll also be catching up with what NNRG have been up to since the last update. In the past month, as well as starting this series on the blog, Nasty Nessies have continued to progress towards passing their mins, had the essential headshot photos taken, met more of the UK roller derby establishment when Rollin' News' Mr X visited, and gotten an article in the local press. In a month's time, we'll return and see what they've gotten up to since.
Probably conquering Europe at this rate!