An interview with Crazylegs.

All the skaters in Team Scotland are important, of course, but Co-Captains Lily Lethal and Crazylegs were responsible for leading the rest to victory in Toronto. We caught up with Crazylegs to talk about the challenges of competing in the world's first international Roller Derby World Cup, and of the future for Team Scotland. 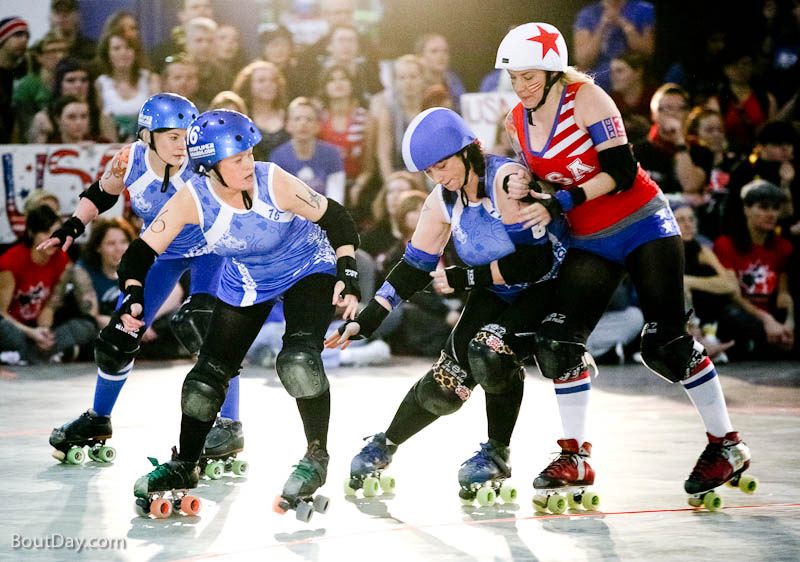 Although we’ve talked about this before the World Cup, it’s worth revisiting now: how did you prepare for the world’s first international Roller Derby competition?
I went to as many training sessions as physically possible - both with my league (the Auld Reekie Roller Girls) and with Team Scotland, and sometimes with the lovely GRG.  I also did a more intense off skates cross training regime to get fitter to be able to handle more than one game per day.  I had no idea what kind of intensity to expect or how many games we would be faced with in Toronto.  Team Scotland organised as many practice dates together as we possibly could in the lead up to the Tournament, we had an advantage in being geographically close with our team mates, but because of other commitments – individual league bouts and practices to plan around, we didn’t manage to hold as many as we would have wanted.We also did some research on the teams/skaters who were listed to take part in the World Cup – stalking if you like, and tried to keep a lot of our focus on bringing Scotland onto the world stage for derby in a good light.
In pretty much all of your bouts, Team Scotland did better in the second period; in fact, you only lost the second period against Team USA and Team Australia (which isn’t bad company to be in).
Team England shared a similar property of having a sudden revival after their initial start, thanks to Ballistic Whistle calling a time-out and restrategising; is Team Scotland’s approach similar, or does Knuckles just incredibly inspirational in his half-time speeches?

It’s interesting to note this trend for second period come backs!  In a tournament situation, it’s almost certainly linked in some part to the warm up and preparation – we had less time generally to warm up and get our heads into the game than in a usual bout situation, something we’ve learned from and will certainly plan for next time. In my mind the Germany game stood out as the most significant in terms of performance difference per half and this was due to a distinct tactical change we made in our game at half time.  In saying that, Knuckles always does give a good half time booster chat – in fact he’s possibly the most positive and encouraging person I have ever met!

While meeting all of the national teams was obviously a major part of the tournament, everyone really wanted to lose to the USA. How did it feel playing the best roller derby players in the world?
How long did it take to switch from being star-struck to trying to hip-check Suzy Hotrod?

The USA game was all about the enjoyment and learning from madly talented skaters. We had a goal to minimise the amount of points they scored which is hilarious to think of now.  I was really focussed on the game, so no time to be star struck.  It's all a bit of a blur with random faces you know appearing and you think 'oh God that's Bonnie Thunders sailing past me!'  I had no idea I had knocked Suzy Hotrod over until I saw my Facebook page that night.  It was amazing the amount of sheer control they had over us – it was like they were playing in slow motion Matrix style and we were just madly reacting to everything and keeping going like duracell bunnies.  I have never expended so much energy in a bout before – I loved how our skaters kept getting back up and never gave up pushing, all with huge grins on faces.   I did notice Sexy Slaydie’s rear end holding me back on more than one occasion though, and after the game blurted out ‘I love you’ to her, like a geek. 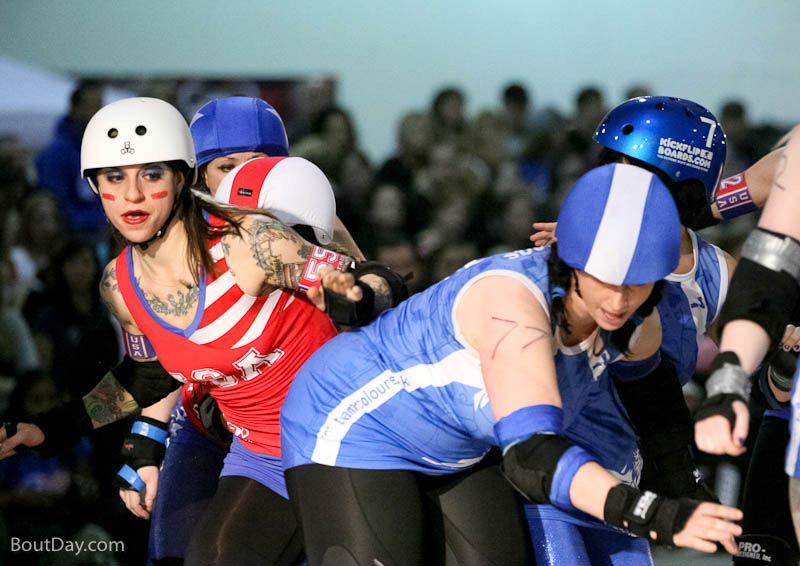 Team Scotland ended up placing 11th in the rankings. How do you feel that ranking reflects the team’s performance?

I’m happy with 11,  It’s my fave number!   In truth – I am very proud of the whole team for playing with such heart, and our management team for organising us so well.  I think unless we’re looking at first, second, third or fourth place - which we will be for next time ;-) - it really doesn’t matter too much where you come.  We got to play some of the best teams from places furthest away from Scotland and I’m pleased about that. We have all come back with so much new knowledge and of course there are some key area’s I would like us to focus on for any future TS endeavours, but I’ll be keeping that to myself for now!

Being Co-Captain meant my time between bouts was focussed on the next bout, helping to re-write line ups, team rosters and making sure the team were happy and the occasional power nap/toilet dash! I didn’t get as much chance to ‘internationally network’ as I would have liked to; but I did get a chance to catch up with some familiar faces from past bouts, which was lovely.   We were given some great advice from the TORD coach, and I know a lot of our skaters did manage to get some good advice/chats and bonding in, so we’ll be making sure we utilise everything we can in building an improved team for future games/tourneys. One area is of course more integration and practice between skaters from the different leagues involved and being fast to adapt our strategy when required.

It’s not much of a secret that at least some of Team Scotland are already thinking about further bouts against national teams post-World Cup, especially since you didn’t get to play all of the European teams during the tournament itself. Do you have any particular team you’d like to play that you missed during the Cup?

As it happens, there is already some secret squirrel planning underway looking at future bouts, so hopefully something will be arranged.  I would jump at the chance to play any of the teams we didn’t manage to play against.  Ireland looked really good and would be an interesting match up I think, and I really wanted a chance to play against Sweden…but then France did so well too…oh so many to choose from. Hopefully we can play them all one by one.

Being from there originally, would you have tried out for a Team Wales if one had existed in time for the World Cup?
(Now you’re wedded to Team Scotland by the team selection rules, how would you feel about a Team Wales participating in the next World Cup?)

A good question! It would have been a difficult decision, but ultimately I skate for a Scottish league and my home is here now – so even though my immediate family are still mostly based in Wales I would have had to choose Scotland (sorry mum).  I've so much respect for skaters that I've played with and against from Scottish leagues and geographically it makes more sense for me to be involved with planning, practices and bouts for Scottish Roller Derby. It was a real shame that Wales was not able to represent this time – I know there are some amazing skaters emerging in Wales already, and I would be so excited to see a Welsh team in future tournaments.  I would definitely be their biggest supporter!

And, in the medium term for Team Scotland, what would you like to see happening? There’s been talk of a European Cup in the next year or two, for example, or just more international bouts in general?

A European Cup would be awesome in the interim – the more time we can spend playing with the best skaters from countries outside of Scotland, the faster we will learn, improve and hopefully close the gap between us and the USA!

Finally, how do you feel about the next World Cup, in two or three years? Will you be trying out for the national team again?
Well I’m no ‘spring chicken’ at 38, but I do think that with careful training and looking after myself, I have a few good derby years in me yet! I’d love to be able to try out for another World Cup or European Tournament; it was the best experience ever, hands down.  But in saying that, there are so many talented new skaters springing up all over Scotland, that it may be time for some new blood take my place? I’ll definitely fight them for it though ha-ha.