Our next interviewee from Scottish Roller Derby's newest bouting league is someone who may need less introduction than most, having managed to appear in several articles in her local press already. Yes, it's Fierce Valley's Lady Feerocious! 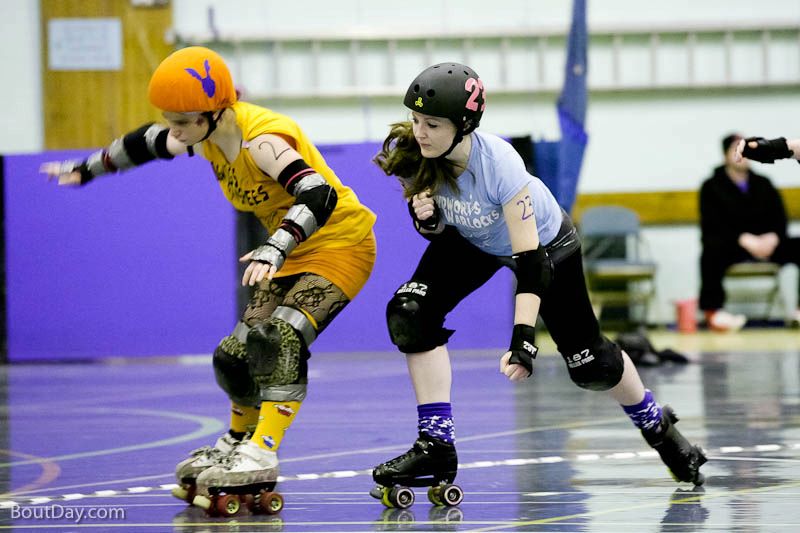 What first attracted you to Roller Derby?
I went along to watch my first Roller Derby bout in March 2011 (DRG vs. MRD) knowing nothing about the sport, but being told by Rufi-Ohh "you'll love it"! While watching the game, I was drawn to how these girls could look so graceful gliding along on their skates one minute, and then the next, they would be throwing powerful hits and flooring the opposition! I'd roller skated and ice skated when I was younger, I enjoy finding fun ways to keep fit (the treadmill bores me to tears) and have a real competitive streak, so roller derby seemed like the perfect fit. After Rufi told me about a new league starting up in my area, I went along to FVRG's Fresh Meat in May 2011 and have been hooked ever since.
Derby names are an important aspect of the sport, especially when you're starting out. How did you choose you name, and how does it reflect your personality on track?
My friend Scott bought me the title of 'Lady' for my 22nd birthday so 'Lady Fee' became my nickname at uni. I definitely wanted to incorporate this into my derby name somehow and to show that although I might look all sweet and girly, all that goes out the window when I'm on track :) I'd tried to think think up some clever puns for a derby name but having the imagination of a goldfish, I failed miserably. In the end, it was over a cup of tea with Scott one afternoon that we stumbled upon the name 'Lady Feerocious' and it just stuck!
What was your biggest initial difficulty?
Although I've always been fairly fit and active, I'd never actually played in a team sport before roller derby. If I wanted to go for a run or a swim or whatever, then I'd set off on my own and know that it was all down to me. To then find myself skating with 15-odd skaters every Sunday who were all progressing at different levels, was very difficult. I don't like being 'average', so skating alongside the more experienced girls gave me the motivation to improve, and quickly!
Lots of roller girls find it hard not to spread the word about their new sport. How have you been spreading the word?
It's a hard job to keep me quiet about roller derby! I set up a personal blog not long after joining FVRG to share my experiences as a Fresh Meat skater climbing the ranks to the heady heights of team skater. After publishing a few articles, Sandy from Scottish Roller Derby approached me to join his team of collaborative bloggers to spread the derby love - how could I resist?! Unsurprisingly, I'm also on the PR Committee for FVRG and try to go to as many inter-league events to meet other skaters and support their leagues.
What’s the most important thing you’ve learnt/ done this month?
The most important thing I've learnt this month is to be supportive to my fellow skater. Roller Derby is a sport of extreme emotions and everyone - including myself - needs a pick me up from time-to-time to remind them why they love the sport so much. Even if they are clutching their bruised shin at the time!
What were the most difficult and the best things?
The best thing I've experienced with FVRG this month has been the Bruise Brothers try-outs! There was such a great atmosphere on the night and a real buzz of excitement from all trying out, and our NSOs were incredibly supportive throughout. The derby love was strong! And of course, being selected for the Parma Violents team that will take on DRG's Silvery Tayzers was also pretty great!

Since then, the most difficult thing for me has actually been keeping my nerves at bay and a smile on my face in the lead up to our first public bout against DRG. I'm cramming in as much practice and rules knowledge as possible, and even managed to sneak in an extra game in GCRG's intra-league bout 'Slaughtership Down' yesterday! I just have to keep reminding myself to have fun out there and to do my best.

What's new in FVRG this month?
Bruise Brothers will be our first public bout, and it's on Saturday 18th February at 12 noon in Dundee. We also have a Fresh Meat taster session the very next day! The response we've had has been overwhelming, with the biggest sign-up rate yet! It's amazing to see how far FVRG have come in just over a year :)