Monthly Diary of a League: Fierce Valley in March: Grizabelta

After graciously deferring the chance at being the first interviewee for Fierce Valley's Monthly Diary, finally the bottle has swung around to league founder, Grizabelta! 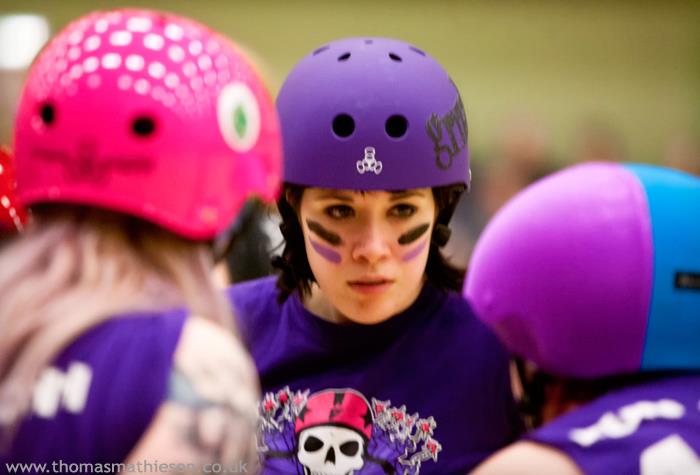 What first attracted you to Roller Derby?
My friend (and now referee) V for Viennetta had been talking about it for some time - he'd been following the progress of ARRG online and eventually convinced me and Kirk (Jammett - my very own Ref-boy!) to go along to a bout with him - FCR's first bout against ARRG. I spent the entire time quizzing V and poring over the programme to try and figure out how it all worked but was hooked instantly and knew from then it was something I wanted to be involved in. I'm really not a 'sporty' type but it just looked like a fun way to have fun, get some exercise and deal with those anger management issues...!

I'm a crazy cat lady through and through (the fact my name is Kat is just a coincidence, honest!) so had tried every possible name I could think of with cat in it, only to find someone else had beaten me to it! So I looked to 'Cats' the musical and some of the characters from there... Grizabella is the once-glamorous, now very scraggly cat who repulses most of the other characters. I don't know if the name reflects my personality on track as such - probably more my appearance by the end of training!

Initially - staying upright on 8 wheels! I went into derby with no skating experience (aside from rolling slowly around the pavements when I was about 10) and not a great level of fitness, and would get disheartened when new skaters came along and seemed to take to it with such ease. But it's true what they say - everyone does learn at their own pace and I've learnt to monitor my own achievements, rather than comparing them with other people's.

Talk, talk and more talk! It does become such an integral part of your life that it pretty much comes up in every conversation! We've also been very lucky to have made some good links with the local press recently - so we've had a few articles pre- and post-Bruise Brothers!

That roller derby is all about the team performance, not any particular individual skater. A lot of us got sooo nervous in the run up to our first public bout - and a common fear was doing something daft and letting the team down as a result. If something daft did happen then I can't remember it, yet I can remember the times when we worked really well together to slow the opposing jammer or help ours through!

For me the most difficult things were our training sessions a couple of weeks prior to the bout - again it was probably the nerves but I got into a bad cycle where I'd have a bad session, beat myself up about it, put more pressure on myself to better next time but then do worse because I was stressing out so much about it! And the best had to be overcoming that fear, realising that yes, there are some things I'm not so hot at - I'm not the fastest skater or the biggest hitter, but I've got plenty of other skills and knowledge that are of equal importance in a bout situation, and that there are things you might not see yourself as being able to do but your team mates know you can :)

What's new in FVRG this month?

We've just reached the end of one of our 12 week cycles - so have seen skaters graduating to advanced sessions after passing all their minimums, and a new Fresh Meat intake. It's so rewarding seeing so many happy faces, whether they've been with FVRG for a couple of weeks or for months and months, and I'm amazingly proud of the work everyone has put in to make the league such a success! Derby love all round!

Griz has selected BloodHoney as April's interviewee, so be sure to come back to see what Fierce Valley have been up to in the next few months.