Monthly Diary of a League: Fierce Valley in May: Hey Ho, Let's Jo!

Once again the time rolls around for the next monthly diary entry from the Forth Valley's finest skaters. This month, it's Hey Ho Let's Jo telling us about what's happening at Fierce Valley. 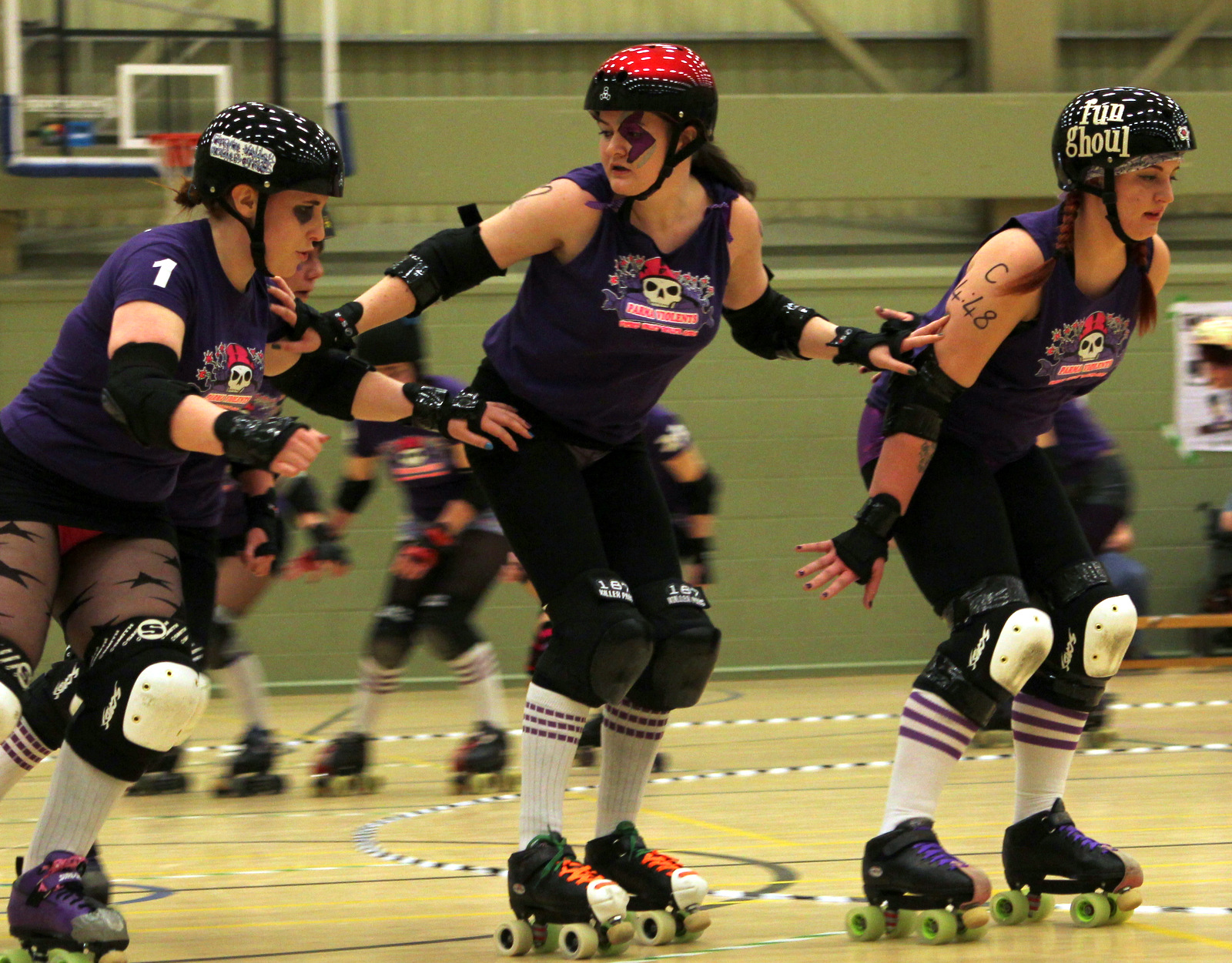 What first attracted you to Roller Derby? I started skating just over a year ago with Fierce Valley, my friend (Calamity Jen) and I first found out about FVRG after going to a roller disco at Falkirks finest establishment (har har) that is City Nightclub. The whole reason we went to the roller disco is because we had just newly been to watch the film Whip It and quite fancied ourselves as derby girls, but not realising there was anything like it in the Forth Valley thought we would settle our curiosity by going to the next best thing Falkirk had to offer, a roller disco- oh how wrong we were. I still remember when Grizabelta and Chaos Faerie came over to 'recruit' us, and the rest you could say is history. I had never really pulled a set of skates on in my life and to say that I was a shaky on my feet to begin with is an understatement, I remember leaving our first taster session, rubbing a sore arse after a bad fall on my coxic and trying to calm my jelly legs, all while saying, 'well, I take it we're not going back to that again!', I was more than a little shocked when my friend replied- ehh definitely! Fast forward a few months and you could not prise the skates off of my feet! Sticking with it and overcoming my fears is one of the best things I have ever done.

Well my name's taken from the brilliant Ramones song Blitzkrieg Bop, but rather than say it reflects me as a grungy/punk type on track, I would say the rallying cry of Hey Ho Let's Go! in a cheerleader like fashion represents me a bit better.
Like a lot of girls, I was deliberating over names for ages, but nothing was grabbing me in a YES I need that as my name way. It wasn't until the lovely Fun Ghoul suggested Hey Ho Let's Jo! that I was settled.

Hmm, being a complete newb to skating, I would say finding my derby legs was pretty challenging. I had no balance for staying up right at all, actually I've said that all wrong, I had every balance for staying up right, which often landed me on my behooky. I had no balance for derby stance! But perseverance and getting used to an achy back in the morning, I eventually got there and found my stride.
Lots of roller girls find it hard not to spread the word about their new sport. How have you been spreading the word?
Pretty much in every conversation I have. It seems to creep in with every 'What did you get up to this weekend?', 'What's new with you?', 'How did you get that bruise?', 'What's with the gammy leg and limp??'. Roller Derby is definitely more than a sport, it's a lifestyle- it's only natural it comes up, a lot.
What’s the most important thing you’ve learnt/ done this month?
In terms of skills I would say improving on my transitions, but a much bigger issue for me is my confidence, so I'm trying to be a bit more, yeah I did do that quite well, didn't I? Which is a really weird and difficult thing for me, but I think it's really important that I become more empowered to progress both on and off track.
What were the most difficult and the best things?
The most difficult things are feeling you've let your team mates down. I'm pretty bad for beating myself up over everything, I should have made that hit, my wall should have been tighter, why I am not nimble enough to get myself from the back to the front of the pack faster etc. Even when everyone else is over a situation, I'll still be moaning on about my lack of performance for ages. Hence the new confidence drive as I mentioned above!
There are so many great things: executing a tactic to perfection, that moment of bliss when each member of your team, including yourself, gets everything so right and everything you've been working for and fretting over just goes textbook, it makes everything worth it. That feeling at the end of a bout/scrim where you know you've gave everything you had and everyone worked well together and there's that buzz in the air of excitement and happiness and you know your team have just progressed a little bit more. That's the feeling that makes it worth it, and the emotion you remind yourself of when you or any team mates are feeling a bit down.
What's new for the Fierce Valley this month?
Lots!! We've just voted for our Captains and Vice Captains for our first Inter-League bout and Belfast bout. Our intermediates are advancing all the time, so our tryouts for Belfast will see FVRG reach a new milestone where we'll be competing against each other for the first time to prove our worth for a place in the team. It's so exciting to see our wee/not so wee anymore league advance all the time. Very exciting times ahead!