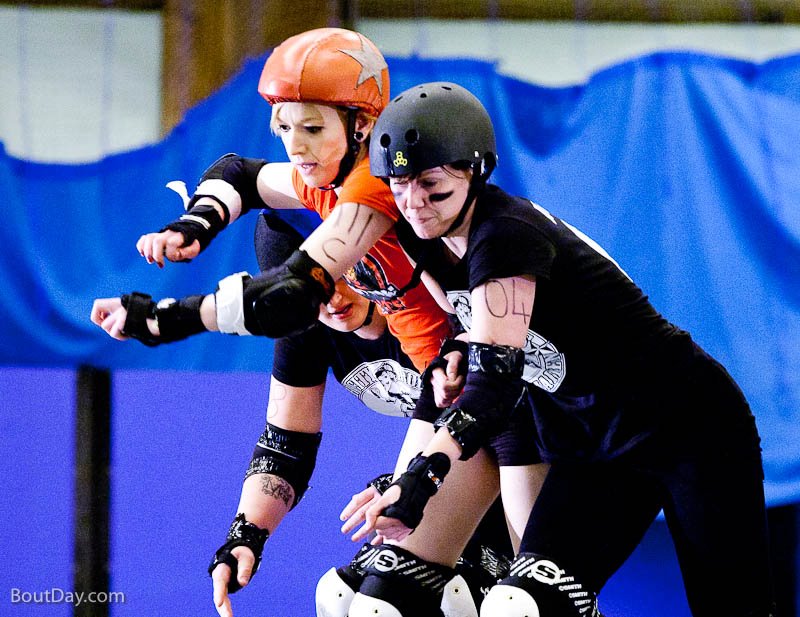 What first attracted you to Roller Derby?
After watching an ARRG bout during the Edinburgh Festival in 2010, I had to try out roller derby. It looked like the kind of sport I would be into and it was on skates. Who doesn't want to try roller skating again?! I had a look on-lineat more bouts to get a better understanding of it and that pretty much sealed the deal. I just had to find myself a league after that.
Who are your derby heroes?
To be honest, I don't have any specific derby 'heroes' because there are so many amazing people involved in derby that they are all heroes in their own way - those who come along to Fresh Meat never having skated and persevere until they see a breakthrough; skaters who come back after months off from injuries and get straight back into training; the skaters who create new leagues and work relentlessly to build their league up - These people are my heroes.


Derby names are an important aspect of the sport, especially when you're starting out. How did you choose your name, and how does it reflect your personality on track?
I wanted my skating name to include my real name 'Joanne' but I was finding it difficult to think of anything. Shamed to admit I then started looking through the dictionary to see if I could find anything that would fit! Total lack of imagination......
To be honest, I don't think I have a different personality on track and I'm sure I don't cause anarchy anywhere but I like my name and I'm glad I was able to keep it simple and include my own name in it somewhere :0)

What was your biggest initial difficulty?
I loved skating when I first joined FVRG and I picked it up quite quickly, but after a few months I had an accident while skating and busted the ligaments in my left knee. It was really difficult getting back to skating after 5 months off. I was always conscious of my knee and I pulled back a bit, not skating as fast, not doing crossovers. It was a challenge getting myself in the right frame of mind to properly enjoy roller derby again.
Lots of roller girls find it hard not to spread the word about their new sport. How have you been spreading the word?
The other interviewees have said it all before - we never stop talking about it! Like everyone else, people are bound to be sick of hearing about roller derby but I don't stop. You just have to keep telling everyone you meet how amazing it is and that they really, really need to join a league, preferably FVRG ;0)
What’s the most important thing you’ve learnt/ done this month?
The most important thing I've learnt is, that no matter the ups and downs or how steep the learning curve, FVRG will continue to grow and get stronger because of all the great people we have working together.


What were the most difficult and the best things?
The most difficult thing is giving bad news to skaters. As part of the Sports & Training committee we have to let skaters know whether they have passed their mins, whether they have passed team try-outs, etc. I hate doing it because I feel for each and everyone one of those skaters.
The best thing is giving them the good news when they pass their mins, or get their 25 in 5, or make a team. When you see the joy or surprise on a skaters face - it really is the best thing.
What's new for the Fierce Valley this month?
Its going to be quite a busy month for us actually. First off, we have our first ever Intra-League bout!! It's a closed bout so not open to the public but I am so excited about playing in it as a few of our recently mins passed skaters will be taking part.
We're also trying to get the FVRG name out there and are taking part in a local Bike Week Launch Party. Obviously FVRG has nothing to do with cycling but we have been invited along as some of our skaters use the Falkirk Helix paths when they skate outdoors. The Helix Project want to show the diversity of people who use the paths and its a great way to get our name out there.
And last, but not least, we are also taking part in the Roller Derby Torch Relay which has been organised by Severn Roller Torrent. There are 17 leagues across Britain skating the distance of the Olympic torch relay, a total of 3787 miles, to raise money for SportsAid. FVRG skaters are all looking to skate at least 300 laps each - there's still time to donate at http://www.justgiving.com/Roller-Derby-Olympic-Torch-Relay !
(In fact, FVRG skated a total of 11940 laps, with some individuals managing a marathon-scale 600 laps by themselves!)