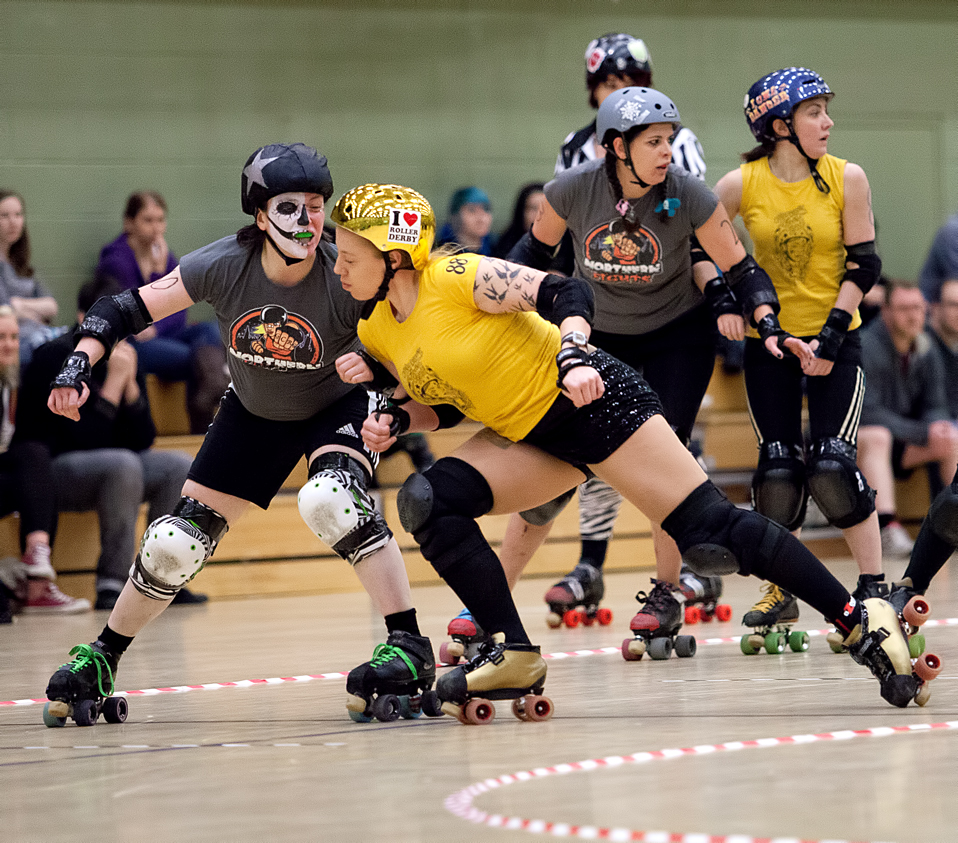 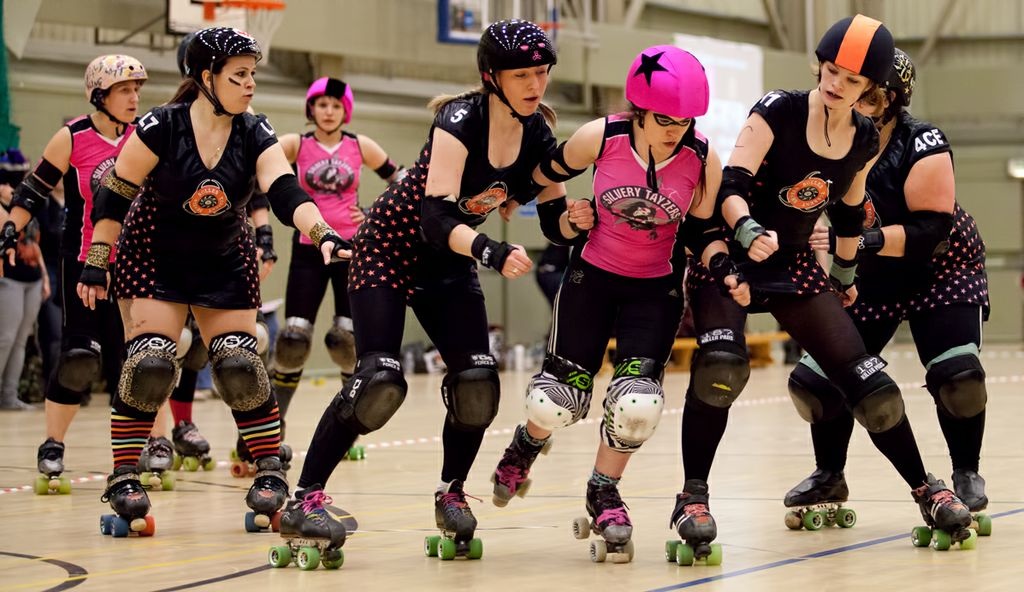 First up was Granite City's Northern Fights, who took on the Newcastle Roller Girls travel team, the Canny Belters. With GCRG dealing with a lot of issues this year in finding a suitable home venue, DISC became their base for the day, and their cheering support made it sound like they were back up north.

In a fitting tribute, GCRG carried their team flag, complete with the number 69, in honour of Frost Damage, who is currently in a critical condition in hospital in Aberdeen and continuing to fight her way back to health. Many members of the team also wore snowflakes in tribute to Frost.

The Canny Belters started off strong, winning lead for the first few bouts, but Aberdeen weren't going to let them run away with the bout. Some hard hits on the visitors and main jammers Rockn Riot, Clinically Wasted and Crimson Chaos getting lead brought the scores close.

For the entire bout the scores stayed within 20 points, with the winners changing seemingly after each jam. At halftime the score was 69-59 in GCRG's favour, but everyone in attendance knew that with the way the bout was going, the win was still very much up for grabs.

The last two minutes were possibly the most nail-biting moments of a bout I've ever been at. With just 1.30 on the clock, the score was tied at 120. The penultimate jam saw Ruby Riot get lead and score a single point, meaning that it was down to the last jam.

Clinically Wasted was the jammer for GCRG and when Newcastle's jammer dropped her star panty, the home crowd went nuts. But the Geordies recovered and managed to score four points, giving them the win and sending the supporters nuts!!

Next up was Dundee's Silvery Tazers, who were looking to complete their 100% undefeated home run for 2012. Facing them was Severn Roller Torrent, all the way from Gloucestershire.

Most of the first half was a closely fought contest, with the score at one point tied at 62 apiece. Severn fielded a lot of heavy hitters, who were determined to hold back the Dundee jammers.

Dundee used Dr Carnage, Harleen Quinzell and Sabre Tooth, with Milky stepping in on occasion. With Dundee's jammers gaining more experience all the time, they looked comfortable following default strategy, knocking their way through the Severn walls, which weren't easy to break.

A power jam took the bout into half time, when the score was 93 Dundee, 62 SRT.

The second half saw Dundee extend their lead, holding Severn back and stopping them from scoring.

A couple of panty passes - including a dropped panty - for Severn failed to have the desired effect, and Dundee continued to pull ahead, spurred on by the noisy home crowd.

Psychomilky managed to narrowly avoid ejection from the game, racking up six trips to the bin. But strong jams by her near the end of the bout redeemed her.

It was a great day of derby, showcasing some of the country's best skaters and acted as a great inspiration for wannabe derby girls in attendance.