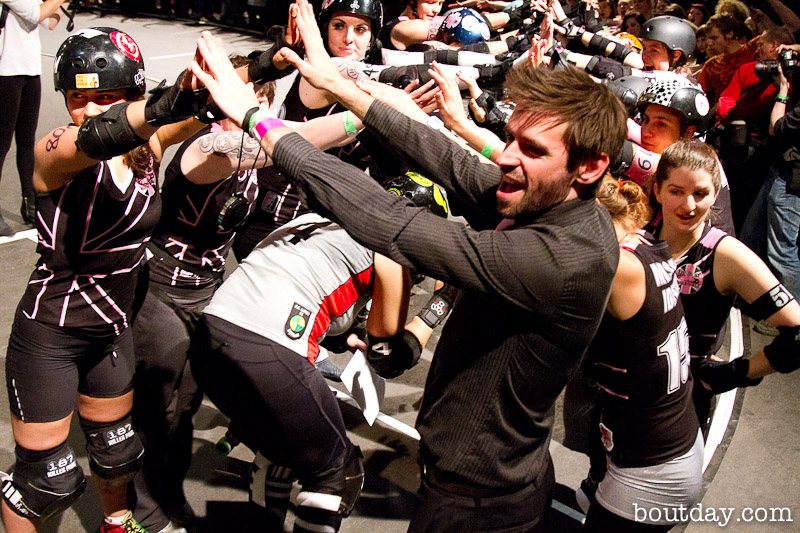 After the excitment of Track Queens,we present an interview with London Roller Girls coach,Ballistic Whistle and ask what he thought of Europe's first WFTDA sanctioned tournament and the future of European Roller Derby.

The Track Queens tournament seemed,from the streamed footage,to run very well,what were your impressions on how it all went?

Bear City did a great job of putting together a slick tournament that really did justice to the high level of play that was on display. It was clear that they had considered so many aspects that often fly under the radar at these types of events.

What were your Track Queens highlights?

That's so tough to decide! There were so many hard fought classic games with great gameplay and super intelligent and well drilled play. There were so many bouts that had nail biting finales. I think the final jams of Berlin playing both Gent and Stockholm were fantastic.

Track Queens showed that other than LRG,the other competing teams are grouped very close together in terms of abilities and skills,how long do you think it might be before teams emerge in Europe that can seriously challenge the London Roller Girls and what advice would you offer them?

This is something that we're constantly keeping an eye on as the progression of derby in Europe is something that will require a number of teams to work towards, not just a handful. This tournament illustrated which teams really have that hunger, drive, and determination not just to challenge LRG for Europe's top spot, but to be able to mix it on an international scale. Personally, I think having that aspiration is what will make the difference. There's a lot of potential in those teams and if their goals are aspirational enough there's no reason why they can't go on to bigger and better things.

Like a lot of fans,I sometimes find blow out bouts to be somewhat dull,yet LRG still somehow make them entertaining.I noticed a few new jammers being tried out and the whole weekend seemed like an opportunity for you to tweak tactics and plays.Clearly these kinds of bouts are just as important to LRG as the ones against say,high calibre US teams.How do you view the bouts you know LRG can win?

While we definitely have varying gameplans based on jammers and pack rotations, we did not ease up on any of our opponents during the tournament. Every team we played provided us with a challenge and part of what drives the Brawling players on is being able to analyse, identify patterns, and adapt. We go out in every jam wanting to get the best possible result we can. I just can't think of another way to play.

One of the announcers ,rather poetically,called Go Go Gent Rollergirls the 'real' winners of the tournament.Alongside Helsinki,Gent proved themselves rising stars in an otherwise fairly static field,were you as surprised as everyone else that even at that kind of level of competition that teams can still pop out of the woodwork?

I loved watching Gent play, they had a real togetherness and cohesion that you don't often see in teams. It's clear to spot the desire is there to really explore the sport and find their own identity based on what they have observed and learned. I hadn't thought about that before, but while they are definitely utilising common strategies within the game, they seem to have developed their own style of play that is working wonders for them.

Having previously expressed a hope that the WFTDA would formalise a European Region,are you disappointed with the decision to change the playoffs from regions to divisions?

It seems like the logical progression from where we are now. The change to the regionals structure actually seems to have opened more doors for us specifically. It seems that we had reached a point where were running low on new in-region teams to play in order to reach our ranking requirement for Regionals. The new system means that we're now able to play a much broader range of teams over a larger geographical space. Travelling from Europe to the States is always going to be expensive, and so East, West, North, or South doesn't really make that much of a financial difference. I would imagine that this will also help the rest of the European teams when it comes to selecting potential North American opponents.

Lastly,I can't pass up the chance to ask what you think of the new rule set.Many were afraid that the rules would be 'dumbed down' and that no minors could lead to scrappy pack play,do you think that WFTDA have achieved their aim of streamlining the game for fans and skaters alike?

I have to admit that I'm not entirely convinced that the new rules will "speed up" pack play or encourage teams to skate more, but then again I'm not entirely sure that was the aim of this new rule set. That seems to be the hope of a lot of people I've been talking to. Whatever changes happen to the rules, you can be sure that we'll be analysing them pretty closely and working out how we can adjust our gameplay to fit within the new parameters. Only time will tell how these new rules changes will affect gameplay.