This month's diary from Fierce Valley comes from the talented Wiggy Stardust, just after the Parma Violents' first bout of the year, against Preston Roller Girls. 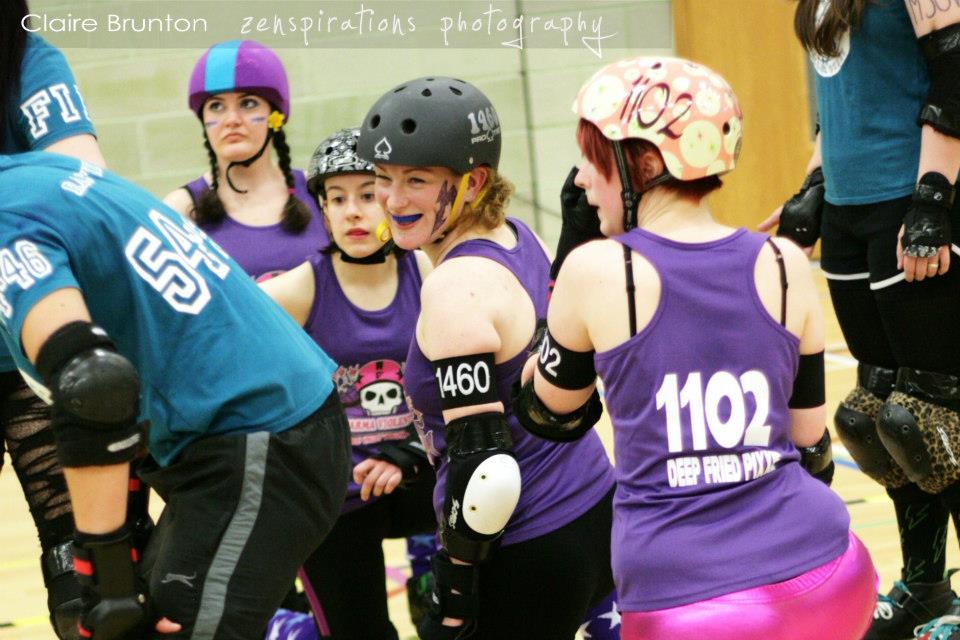 I have Slayherella (GCRG) and Monkey Wench (FVRG) and their facebook status updates to thank for this one, their devotion to the sport was very clear and it had me intrigued. I was really interested in finding a team sport, and liked the idea of getting back into some quads, so following a conversation with my nephew I signed up for fresh meat with FVRG. I was hooked from then.

In my early days of fresh meat it was all the trainers and helpers who were patient with me giving me hints, tips and wee confidence boosts, they are my hero’s, without them I would not be skating now. They made such a difference. Frocky Horror has a particular grace on skates and I envied her crossovers so much, the fact she spent so much time helping me to achieve a crossover was helpful. My heroes remain the same, the skaters around me who each week show determination and patience, both in teaching me and learning the drills.

Derby names are an important aspect of the sport, especially when you're starting out. How did you choose your name, and how does it reflect your personality on track?
My name ‘Wiggy Stardust’, has had a wee journey. The nickname ‘Wiggy’ has been with me since my high school days when some comical teenage boys decided that I must be wearing a wig. No matter how hard they pulled the hair remained, as did the nickname. I struggled to find a derby name and an alterego so decided to make the most of what I already I. The ‘Stardust’ part was popularly voted for by my friends through facebook and I liked it as my head is so often staring up at the stars. The final vote was made at my first scrim when my team mates agreed on ‘Wiggy Stardust’ over the runner up name ‘Wiggy Pop’


What was your biggest initial difficulty?

See above – Cross overs. I really struggled with them. I read blog after blog and asked advice from so many different people. I even took to walking up and downstairs side aways so that I could cross my legs over into a lunge. Eventually it was just repetition, walking with my skates on and lunging round in circles in my kitchen, in my living room, in my garden. I was determined and practice got me there. I did let out a wee cheer when I achieved my first cross over on track.

Lots of roller girls find it hard not to spread the word about their new sport. How have you been spreading the word?
Facebook led me to roller derby and helps me to spread its word. I also talk a lot about derby with my non-derby friends and family, I now have self imposed limits as to how long I talk about derby when I catch up with them. Although I do sneak it back into conversation by talking about fitness.
I think I am achieving something in getting the word out there, even my 99 year old Gran has donned my skate helmet in an attempt to learn more. Although I have asked for her not to be shown videos of roller derby as she might have something to say.

Remembering to stay focused on what the goal is, whether that be on a personal level or for the team. I have also realised that there is only the one of me and sometimes you just have to say ‘No’. I want to add that I have just played my third bout representing FVRG in the bout against Preston Roller Girls, the feeling coming off at the last Jam and looking up to the score board, I just wanted to cry with happiness. That was an amazing feeling.

The most difficult has been balancing derby life with non derby life. It is not easy and I am not sure I will ever get it right. Thankfully I have a very supportive and understanding family and an equally as awesome derby family, and I guess that is the best thing too.

In February we had a home bout against Preston Roller Girls. They were awesome to play against. At the end of March we are bouting away to Newcastle Roller Girls Whipping Whinnies.