This month's monthly diary for Fierce Valley Roller Girls is from a long-standing member, who's contributed to the league in many ways since joining up. This month, we're throwing a Monkey Wench into the works!

My good friend Claire Brunton (Chaos Faerie) has been involved in FVRG since the early days and suggested that I should try it. After a few months of her persuading me I signed up for Fresh Meat in June 2011 and have never looked back! I always loved skating when I was a kid so thought this might be the sport for me!

There are some amazing skaters out there who are such an inspiration. We’ve got some fantastic skaters in Scotland who are so generous with their time and are always so helpful when they guest coach or when you see them at bootcamps/events. I love watching Alma Geddon skate, she’s a derby machine!

My husband (Duff McKegger of The Jakey Bites and Capital City Roller Derby) has always called me Monkey for some reason, probably because I’m cheeky! I’m a big Foo Fighters fan and there was a night at FVRG where I needed my name written down (might have been the start of mins siting) and Chaos shouted out Monkey Wench! It’s totally stuck although most people just call me Monkey now. I guess it suits me on track, I like to have fun with derby, I might not be the strongest player but I always do my best for the team and have a laugh while doing it!

Initially it was the time, derby took over to be honest. But it’s worth every minute and I love spending time with my new FVRG family and our extended family in the derby community.

I just chatted about derby non stop to anyone who would, and those who wouldn’t, listen! It pays off though as I’ve managed to recruit Camelon Diaz, Wiggy Stardust and Duff McKegger to the sport! I also try to help out at any promotional events FVRG do which is great fun and has it’s perks – last summer we met Mark Beaumont at an event.

This month we’re working on our tactics and skills, so it’s good to go back to basics and just work on everything in your toolbag! On a personal note I’m continuing with my volunteer work for Marie Curie and promoting the Great Daffodil Appeal 2013.

I’ve recently had a non derby related injury and was off skates for the best part of 2 months which was really hard.It meant I wasn’t able to bout against the Wirral Whipiteres, in our first public home bout, which was disappointing as I’ve been lucky enough to be skating as a Parma Violent since our first closed bout, Candy Jam, in October 2011. I was also really worried that my injury might prevent me from being able to get back to being ready to bout/wanting to bout but I’ve now returned to fitness and have been selected for the upcoming bout against the Whipping Hinnies.

The best things about derby are the opportunities it brings about and the fab people I’ve met! I had the opportunity to floor manage the FVRG/Preston bout which was a great experience and I’ve been able to watch my girls bring in 2 home wins in a row! I was also Vice Captain of the T Stop Birds during the Summer Shovin Intraleague bout which was great fun!

What's new for FVRG this month?

We’re off to Newcastle to play the Whipping Hinnies on 30th March so we’ve got a FVRG road trip to look forward to! We’ve also got a super exciting social event coming up for our league which will allow us all to get to know each other a bit better by speed dating! 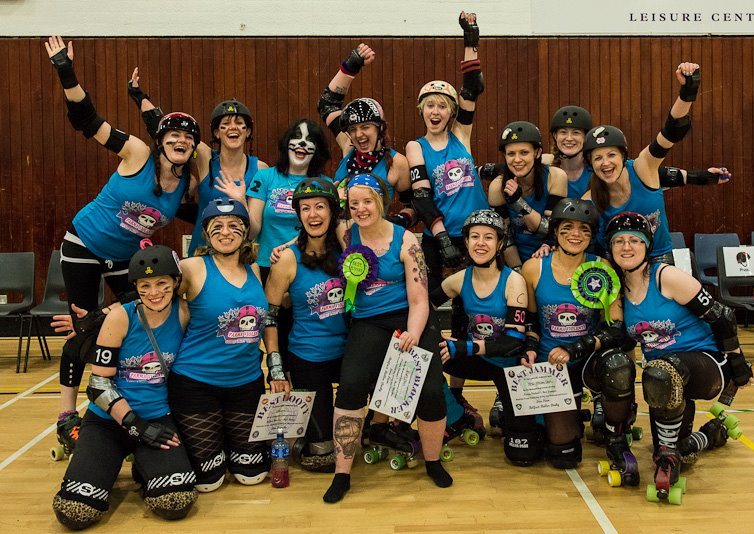