An Interview with... Raven from Into The Nitemare

In every community, there are some individuals who, through dint of energy, enthusiasm or engagement, quickly become linchpins of activity. In Scottish Roller Derby, arguably the newest such persons are Raven and her husband Titan, co-owners of the Into The Nitemare skate store.

In addition to running the store, Raven has also been very much involved with Bairn City Rollers (who she skates for), but has also made inroads into tournament planning and even a little team creation of her own. I caught up with her at the Into The Nitemare base to talk about her discovery of roller derby, the newly revealed Team Nitemare, and other facets of her involvement in Roller Derby. 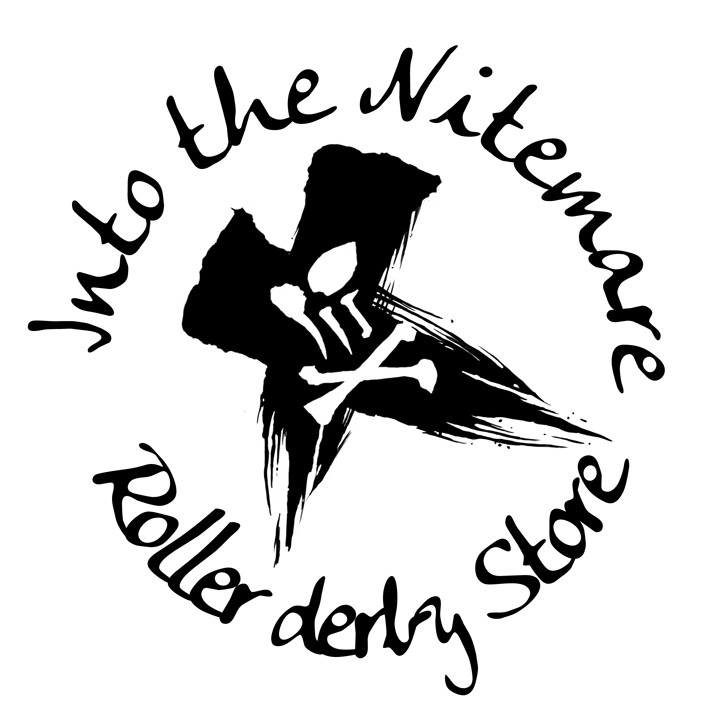 It's a Friday evening, and I've just found the home of Falkirk's local Skate Store in a quiet residential area, thanks to the Queens of the Sin Bin tshirt gracing a torso dummy in the window. For now, Into The Nitemare runs its business from home, all of the stock carefully located out of the way of the two kittens who prowl the living room in that slightly uncoordinated way that immature cats do.

I'm interviewing Raven on a Friday because the very next day, she and Titan are off south to attend a bout in England along with their stall. The wide travel for the business has become an increasingly common part of their lives, and has both fed into and from their list of contacts in UK Roller Derby.

"We founded a book shop around 3 years ago, mainly because I love books; and because I discovered I hated working for other people. Heard of [Fierce Valley Roller Girls], went to a fresh meat taster, but couldn't commit. Stayed involved in derby, started doing a range of clothes. Discovered Queens of the Sin bin, through FB, and started doing their clothes... and then Dundee Roller Girls asked us if we wanted to have a stall at one of their fundraisers... and the travel didn't stop."

And of course, the lure of actually skating was never far away. With the business doing well, Raven was also in contact with Wee Zoomer (who had also tried out derby at Fierce Valley) and her husband Megabloker, who had just started with the Jakey Bites. "[Megabloker] really wanted a full, male, league to develop all the skills that the girls do [not just a constructed team like the Jakeys]. He asked if we could provide some sponsorship to start them off." And one thing led to another, and Scotland's first co-ed league, Bairn City Rollers, was formed. Things started moving rapidly after that, with Raven herself putting on skates again: "I started skating in May last year; 5 days after my derby anniversary, I bouted [in Cherry Pop]. It was AMAZING."

This drive seems to be shared by the whole of Bairn City (although Into The Nitemare also handle Bairn City's bout arrangements), as they have left the traps after their first bout at something of a sprint. One or more of the leagues' three teams (men's Skelpies, women's Central Belters, co-ed Belter Skelpers) is bouting every month for the next year, excepting December, an ambitious schedule even for a very established league, which Raven admits.

"We have pushed it hard and fast. But it's been good. Really Good. We're a very close knit community; there's some politics, but you get that everywhere. But we're a like a giant family - we socialise CONSTANTLY. Not arranged functions or events, we have an extended social support network. Some things that have happened recently, I wouldn't have gotten through without them. It's going to be a hard year, but I'm very excited."

As perhaps with many roller derby players, enthusiasm for the sport pervades most of Raven's responses to questions, whether asked about meeting Vienna Rollergirls (who were put up by Bairn City's You Sayin' Bolt for their visit to play Auld Reekie); "lovely lovely girls", or her feelings about fellow Scottish derby store 5th Blocker Skates; "[owner Marshall] Lawless is awesome; she's just generally awesome, proper derby crush, I love the way she jams. We'd not want to step on her toes.", or Granite City Roller Girls; "Clinically Wasted, she's brilliant: legs everywhere."

This enthusiasm has also seen its way into sponsorship of a number of teams across the UK, and even into Europe (Trondheim Roller Derby Norway are proud sponsorees). Perhaps a little more controversially, it's also seen individually sponsored skaters invited to join a co-ed exhibition team, Team Nitemare."[Team Nitemare] kind of came about by accident. We'd been toying with how cool a 'Team Nitemare' would be, but we toyed with it and dropped it and toyed with it. And then Bob [Battle of Britain] came about. We were approached by Rollin Thunder of SDR, one of whom's fellow skaters is sponsored. So we made a list and asked various skaters we like, and thankfully they all said yes. […] They're not all really well known names, but they're talent we think should be pushed to the fore."

The obvious slippery slope argument of "corporate ownership" immediately rears its head as soon as private individuals start constructing their own teams, but Raven is adamant that Team Nitemare is somewhere between a bit of fun and a promotional tool for co-ed derby.

"It's mainly…" she says, tailing off for a moment with surprise that someone might think she'd be making a team for self-aggrandising reasons, "…the whole point behind it is, well women's derby is big and still growing at a massive rate. Men's derby is catching up fairly rapidly. Co-ed is fairly new… and we just think that it needs an extra push. It's mainly going to be exhibition stuff, 2 or 3 games at year, just to show how girls and boys can work together.

We're not going to ask to be on the rankings. And our players all play for other established leagues - we'd never expect them to come play for us over them! That would defeat the whole thing! It's all meant to be a bit of fun."

Since the interview, another sponsored Co-ed team, Team Daring, has been announced. It will be interesting to see how this aspect of derby evolves in the coming year…

Fun comes up a lot for Raven in other contexts as well. It's clear that while she loves roller derby, and takes the sport seriously, she's also quite committed to the need for the sport to be entertaining. This becomes clear when we get on to discussing some of the hot topics of roller derby, and after dealing with the issue of new mins, where she shows a serious side:

"You can't stay still. Every thing you do; every time you watch a video, go to a bout, go to a social skate, go to training, it's all about learning. Everything's a learning curve, a learning process. So, yeah, it's going ot be hard for some people, but at the same time, it's that progression, it's going to push people. I think it's a good thing, I do think it's a good thing. I think it's going to take a lot of people… I mean, I read some of the bits of it and I thought what, oh no! But when it comes around again, I think it'll be okay."

and a commitment to safety

"And I like the fact that Derby is the only sport in the world where you have to take a written test! I think that's amazing, there's no other sport in the world that does it. But that's one of the selling points for people. You get asked, 'oh, well is it just punching people?' and you can say, well, no you have to set a full set of minimum skills tests, and a full written test about the rules. You can't just 'go up and lamp someone'!"

but then almost immediately switches tack segueing into the topic of derby names and 'proper sport':

"… the rules test, the new minimums, the new blog on should derby names be your real name, I mean 'people won't take you seriously if you don't skate under your real name'(!)

Some of the greatest sports people… and performers like Madonna; Lady Gaga, she doesn't go by her real name!"

The awareness of the overlap between competition and performance (which is a part of most team sports) is also clearly deep in Raven's psyche, as we talk about what's special about roller derby, compared to other sports. "It attracts people who don't feel to be comfortable in "mainstream" situations. Slightly alternative, a bit different, a bit geeky. it attracts the less confident, because you get to put ...on a set of skates, and the derby uniforms - I've never been excited about wearing a skirt before in my life before that Saturday.

It's totally out of character - I'm a baggy jeans, doc martens and a big baggy jumper kind of girl. So for me to wear short shorts and a dress, and face paint; not only is it out of character, it also gives me that confidence to say "let's go and do this!" So is it a costume, or armour? "For me… costume, definitely."

Finally, I get on to the other big event in Into The Nitemare's future: their UK tournament at the end of the year. We don't have quite as much time to discuss the details of selection as either of us would have liked, but as with Team Nitemare, Raven's Battle of Britain features teams that she, well, gets on with. "Obviously we sponsor Rainy City, the Reapers... Shoetown, oh, how could I forget my Shoetown girls, are also sponsored... but we have the Central Belters because I skate with them, and we asked the Lothian Derby Dolls because we thought they'd be at the right level to play the Belters and Belfast to challenge Rainy City. We've had a huge amount of help from the Scottish Roller Derby [community] in arranging things."

Organisation is understandably still under development, but as always Raven seems committed to making the tournament entertaining. A tournament is a process for finding the best team, in theory, but if there are no upsets, the brackets can be predictable. "It's going to be 3 teams per group," she says, speaking about her current concern, "But just putting them in the right way to stop the result being predictable. The obvious final would be Rainy v Belfast… but we don't want that, we want something a bit different."

Whether she gets her wish or not, Raven will certainly make sure that the event is run in the derby spirit of hard work and a sense of humour, and perhaps that's the most important thing.

Into the Nitemare Derby Store: http://into-the-nitemare-roller-derby-store.myshopify.com/