An Interview With Elliot Fress

Next up in line in our announcer interviews, Glasgow Roller Derby's Elliot Fress. 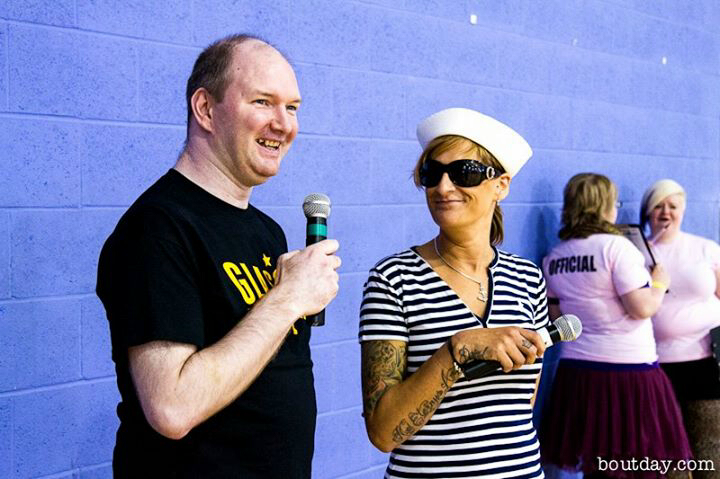 How did you get started announcing for Glasgow Roller Derby

Like many life-changing events, it involved a photocopier; some office gossip; and a man named Helliverance... He and I pretend to work in the same building, and one day about three years ago, he cornered me by said copier and asked if it was true that I was previously involved with professional wrestling. This was true - I'm a former manager/commentator for the Scottish Wrestling Alliance. As I was comfortable with crowds and microphones, would I be interested in trying my hand at live Roller Derby commentary with him? A fee was negotiated, and a few weeks later I was at the ARC, making vaguely human noises over the first GRG home teams bout of the season. From then on, I was never to look forward.

If I can call it a style, it's irreverence, with ignorance firmly in mind. Derby's complex and unique. Anyone coming to see it fresh is in for a lot of confusion as a lot happens and there's no other sport you can refer to for an easy comparison. It's important to keep that in mind and try to keep the watching newbie in mind when things happen on track. "Why?" is as important as "What?" when you're talking about a sending off, or why a team has slowed everything down during a powerjam, for example. The rest of the time, I just quote dead comedians and joke about skater's names, while I'm sure they're not listening.

I've been training as a skater with Glasgow's Mean City Der-boy team for the last six months. The training and generally spending more time around skaters has given me a lot more material to work with, regarding techniques and tactics; but the bulk of what I do is still aimed at the people struggling to make sense of what they're seeing. As I told a crowd recently, Derby seldom reveals her charms quickly, or all at once. It can take a few bouts for someone to learn where they need to be looking, and a commentator needs to be there to help them along.

The more sterile prep is reviewing the rules in the week running up to a bout and trying to get familiar (in a nice way, I mean) with the line-ups before a bout starts. Just about everything I watch, think or hear goes through a filter to see if it can one day be usable in a Derby context. If I hear a song lyric a skater's name can be slipped into, then it gets filed away. While it's underway, a good bout can almost describe itself. But, if you're faced with a 50-odd minute time-out - you better be able to talk some shite to distract folk from heading for their bus!

This is the "Bulldog" question, yes? I've been lucky enough to work with the man and be stunned by his play-by-play commentary. Knowing the limits of the rhythms of my own speech and my diction, though, it would serve nobody for me to try to emulate him. I'm happiest working with anyone who can hear what I'm saying more than half the time, and are prepared to have the occasional spot of harmless fun.

Hard to pick a favourite bout, but generally any time a scoreline stays close for the bulk of the game makes it easier to stay invested. For that reason, I look forward to GRD going back up against Berlin and Stockholm after this past season's nail-biters.