To see in the new year, we at the Scottish Roller Derby blog have cast back our eyes over the past year of derby. We'll be presenting a series of interviews with the Scottish leagues about their 2013 over the next few weeks.

What better way to start than with one of our most newly bouting leagues, Livingston's New Town Roller Girls? We caught up with team captain and league manager Hazzard to look over the highlights of their year. 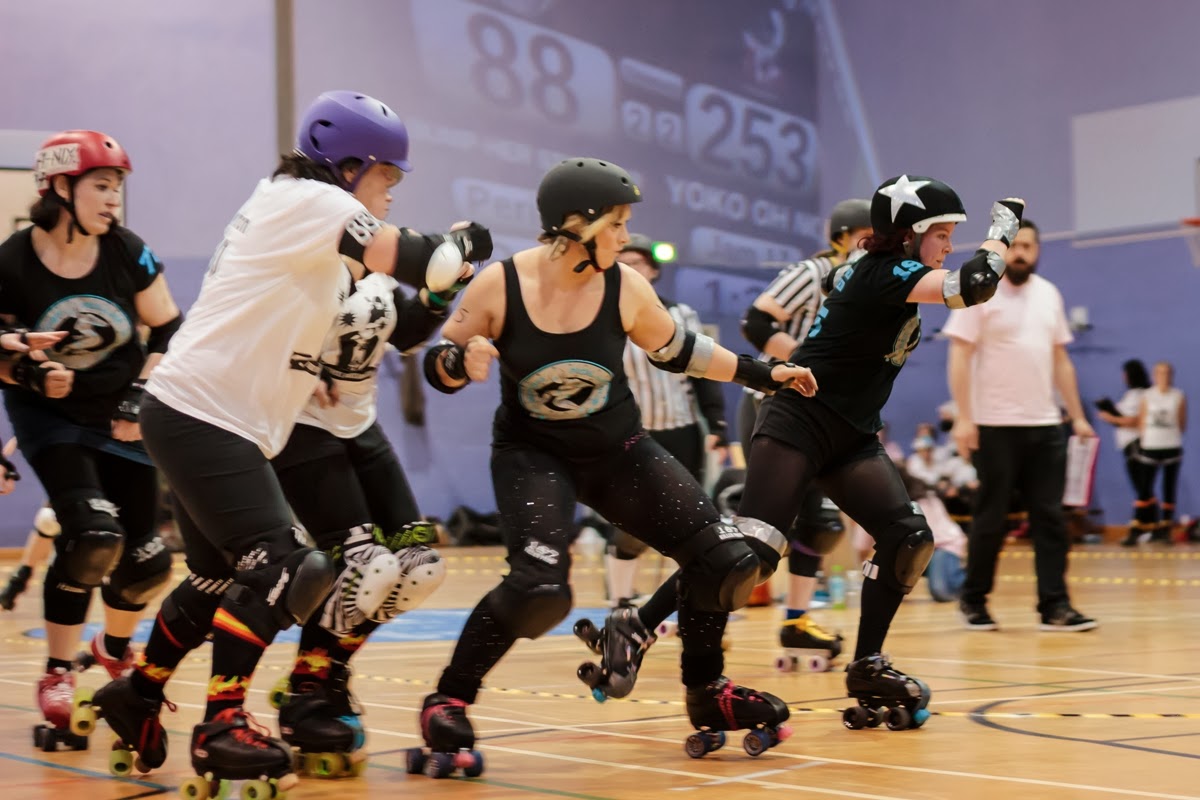 This year saw skaters from New Town bout publicly twice: once as one half of the Co-ed "Mean Town", against Bairn City's Belter Skelpers, and then in New Town's own cherry popper, with New Town taking on Furness Firecrackers' Flaming Noras. How did it feel to be passing that important milestone?

It felt amazing! There are no other words to describe it! Thanks to our girls for their hard work and the help of some amazing leagues as hosts, guest skaters and opponents we pulled off our first two public appearances and took home a lot of experience!

As New Town took the unusual step of breaking their co-ed cherry before their "normal" one, can we expect to see more Co-ed outings for the league? Maybe even a co-ed team ?

Most likely not a co-ed team but we are fond of those guys over at Mean City! Our girls are free to choose if they participate in any mixed co-ed events in the Scottish derby world and we certainly don't discourage skating with the guys!

New Town have built up strong connections with many of the other derby leagues in Scotland, including Mean City and Bairn City. How has the derby community helped New Town to grow this year?

So much! From helping us out with coaching to hosting us in our first bouts they've done wonders for us! We hope that 2014 will see us engage with even more leagues and get involved in even more events and we're eager to see what the year has in store for us!

That community spirit contributed to some other appearances by New Town skaters, with several playing in the "cherry popper" bout preceding Granite City and The Jakey Bites' Co-ed exhibition bout in July. Does a first appearance in a mixed team ease you into derby, or is it just as "real" as an outing of New Town as a team?

I personally think it helps you get over some of the stresses of a competitive bout. It means that you're not too involved with getting your team to win (even though that's part of the fun) . You can focus on enjoying the atmosphere and playing to the best of your ability with people in the same position as you! We also had some skaters in the recent GRD charity bout who were popping their cherry or on their second bout and they loved it! Gets you more involved with the derby community as a whole!

Growth as a league also means picking up new sponsors. I noticed that New Town have collected Sckrpunch as a sponsor this year. Does this imply you'll be present at some of the Derby Revolution events also organised by the store?

We've not had anything about on an official level but I've seen the events floating around. (Recently it was announce Suzy Hotrod would be holding classes?!) But we're very happy to have such a well known derby name tied with ours and we're looking forward to whatever we do together in the future! Especially if a trip to the store in Belgium happens! I'm still hoping for another Skate Odyssey!

And finally, what can you tell us about New Town's plans for 2014?

Well I can't really say much as most of what we have happening behind the scenes is in its early stages but what I can tell you is that we are New Town Roller Girls and we're out to kick 2014's ass! We have some amazingly strong skaters coming through our ranks at the moment and we're growing as a team week in and week out! I feel more than privileged to skate with the girls who are working their butts off to make themselves and the team great! So watch this space!