On Sunday, 1st September 2013, a little bit of Scottish roller derby history was made, when the first Fierce Valley Roller Cubs, and first junior derby, training session took place. A year has passed, and many more firsts have been achieved. 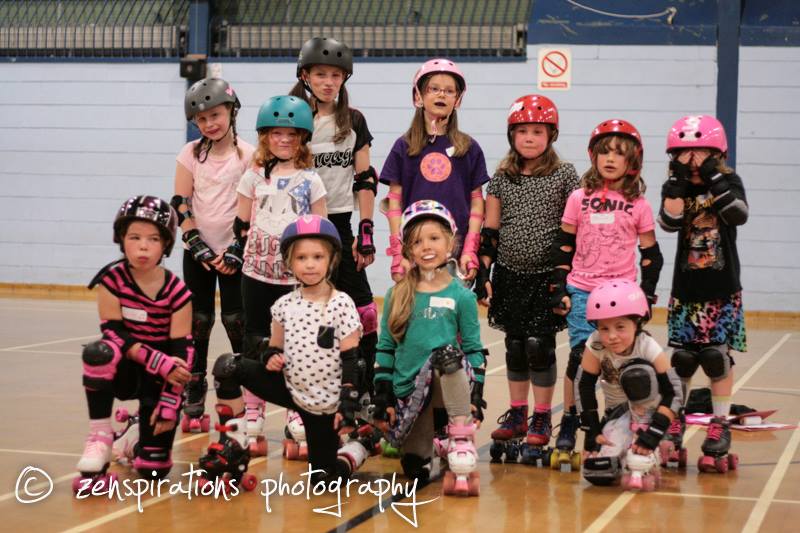 Although the official start date was September 2013, the history of the Cubs actually stretches back much further, to around November 2011. A number of obstacles, not least funding, had to be overcome before getting our first intake of kids on skates, but when it finally happened, we were overwhelmed by the level of interest and support that we attracted. Our first two taster sessions were very well attended and a large number of those first Cubs are still with us today. It was as steep a learning curve for the coaches as for the Cubs themselves, working towards JRDA skills and assessments and figuring out how to adapt training plans to suit juniors. As word spread and interest grew, and many of our first batch of recruits passed their level one assessments, we were able to hold another taste session before Christmas and start a new intake in January.

As the Cubs kept progressing, passing their level two assessments, it became clear that the four training sessions every Sunday wouldn’t be enough for our growing numbers and increasing skill levels, so a third session, on Friday evenings, was introduced for level three skaters. This session focuses on learning derby as opposed to skating skills, and has proven very popular. More recently, we've stopped splitting level one and two into juniors and seniors so all of our skaters, regardless of age, train together from the beginning.
As well as increasing numbers of kids taking part - we had further intakes at Easter and in the summer, we also have a dedicated parents' committee who organise fundraising and social events for the Cubs, the first of which was a successful Easter family fun day. It's great to know that we have a reliable group of supportive parents who are willing to help out in lots of different ways.

One of the highlights of the first year was being asked to take part in a demonstration scrimmage at half time at an ARRG bout in May. It was a fantastic experience for those who took part to skate at Meadowbank in front of a crowd, and also to meet the skaters afterwards. We're grateful to everyone involved for letting the Cubs be part of the day.

The biggest event in the past year has been, without a doubt, their first public game, which was also the first ever public junior roller derby game played in Scotland. We held a four day summer school in the run up to the game, to finalise those skills and tactics, with guest coaches from FVRG and PoS. We had a great turnout for the day itself and the kids thoroughly enjoyed themselves, showing what they can do. It was fantastic to see the support from the wider derby community and a proud moment for the coaches to see everything coming together on track.

Looking back, it's hard to believe that a year has passed since the first Cubs session, but at the same time, it's difficult to remember a time that the Cubs didn't exist! The past year hasn't been without its challenges but the overwhelming success of the Cubs makes it worthwhile. As coaches, we have learned so much, and we are very lucky to have such a fantastic group of kids to work with. We currently have over forty skaters over three different levels , and each one of them impresses us with their hard work, determination and enthusiasm every time they put on their skaters.

So what's next for Fierce Valley Roller Cubs? We're planning another intake before the end of the year, and - exclusive - their second game. We can't wait to see where the next year will take us!