Today we arrive at currently the best European national team (outside of England), according to their performance in the European Championships, where they placed 1st. Looking to see how that translates into Dallas for the Blood & Thunder World Cup, it's Team France!

Team France, like Team Germany, are not new to the World Cup, having placed 7th in 2011, being lucky enough to face Brazil in the first elimination round, and unlucky enough to take on England immediately after - a win over New Zealand in the consolation bracket brought them their final rank.

Team Coach Pierre Ardellier was good enough to answer our questions (which we asked just a week before the European Championship). 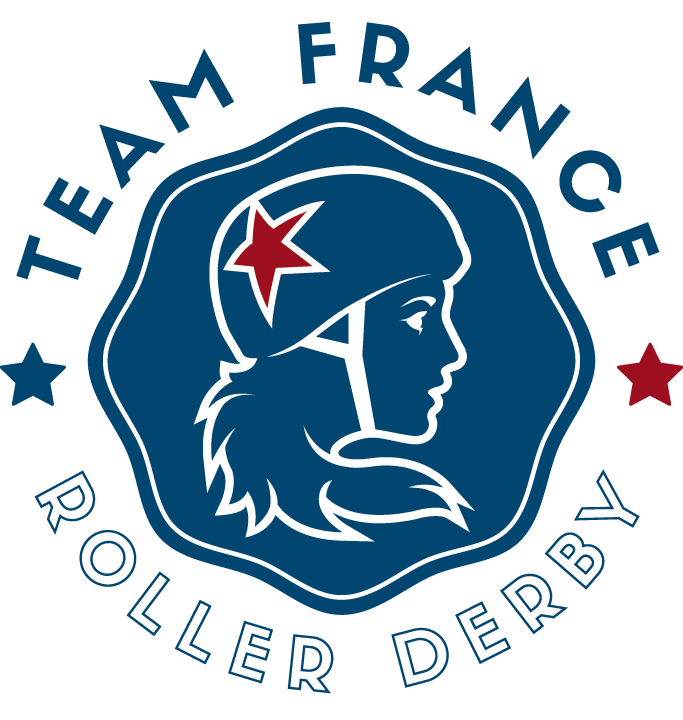 The Team selection this time around features 7 veterans from the 2011 roster, and the rest new members of the team. Does this reflect the growth of derby in France, and is it useful to have the experience of the first world cup to hand?

Yes: it absolutely reflects the growth of Derby in France. For the first WC there were only 3 French teams (Paris/Toulouse/Bordeaux) and some expat players. Now the French Derby has changed a lot ! Lots of teams are now really competitive. Metz, Nantes, Rennes or Le Cres have really awesome players. We have also « new » expat players who didn’t know about the French Derby or who weren't playing at the first WC.

The experience of the first World Cup is not so useful when we are on the track. I’ve used it a lot for the management of the team. For the first Team France, time was short and everybody tried to do their best. This time we have more time so we can do it differently to have a better Team Spirit and a better collective play.

Team France was one of the competitors at the original World Cup in 2011, where you placed 7th. At the time, you stated that you aimed to "gain experience" for future contests: with that in mind, what are your goals for World Cup 2014?

We have only one goal for that WC : Be in the Top 5 ! We work really really hard for that ! We play a lot of bouts, we travel outside France and we see each other nearly 1 week every 2 months. I’ve used the same practice methods that in every French National Teams. We have a 5 days Training Camp in the center of France every 2 months. We all sleep in the same area and we leave all together for nearly 1 week. We practice 6-7 hours per days. It’s really awesome for the Team Building and for increasing our derby level together.

The majority of Team France are sourced from the many French leagues, but 6 are from further away (and 3 from the Americas). How are you organising practices to include them in the team (I assume travel within France is expensive, but achievable)?

Like I said before, when I took on the Team France 2013-2014 I really wanted to use the same practice method than every National Teams : Having week training camps ! For me it’s the ONLY way to build a real Team and not just a mix of great players ! When we organized the try-outs, we said to all the pretenders that there will be a lot a travelling and that it will cost them a lot of money. Every Team France players knew that before starting this adventure. Yes it’s expensive but if you want to be the best, you have to practice better than the best…

You are, of course, one of the teams attending the European Tournament in September. What are you hoping to gain from this (experience, awareness)? I think you've had several other match-ups since your 2014 roster was announced (Team France v the Rest of France?, and playing Norway and Denmark in April, and v Netherlands, along with the Super Brawl of Roller Derby v England and Canada) - in your experience, how do these events help most?

For this European Tournament, we're in it to win it. If we play our best Derby, we should do it but the other nations are all expecting us and we know it… The Super Brawl was an awesome experience ! Playing the 2nd and 3rd worldwide was incredible and helped us a lot to see what was the real issues we needed to work on. Netherlands, Norway and Danemark was really great too. With those 3 games, we could really see our progress and what we still needed to improve. We have a lot to do if we want to achive our goal in Dallas and we are really exited about the Mons tournament. After that we have only one camp in the end of october and we should be able to correct all that we need in this event so Mons will be perfect for that !

You have a few equipment sponsors, and you've held at least one Training Bootcamp. How else are you raising funds to get to Dallas?

Like every National Teams, we are going to make a fundraising on internet with some goodies to buy and win. With the Super Brawl, the 2 training bootcamps and the game in Paris vs the Netherlands, we've earned some money and we really hope that our fundraising will help us too.

French is the first non-English language in which the WFTDA rules have been published. Has this helped the growth of derby in France & Team France specifically?

It’s so incredible that the WFTDA rules have been published in French for the first non-English language !! I think that will help the French Derby for this year with all the Fresh Meats and the new leagues who will begin. It will help in all the aspect of derby right now but not especially the Team France. The WFTDA publish the rules in French only a few weeks ago and the Team France practice for more than a year by now. But it’s a really great reconnaissance and we are really proud of that !