Kicking off the Scandinavian interviews in our World Cup series, we caught up with Team Norway right after they played in a European Roller Derby Tournament. Signe Sletmoen has kindly shared how her team are preparing for their first appearance in the Blood & Thunder World Cup.

1. Team Norway is filled with skaters from 2 different Norwegian teams, as well as skaters from England and USA! How did you organise the team selection process since your skaters come from so many different countries?

When we first started talking about gathering a national team, we asked around to locate Norwegian roller derby players in foreign countries. We also announced that we were looking for three further positions: two coaches and one Team Manager. We invited everyone that fitted the criteria along to two weekend sessions where we worked on skills, drills and scrimmages. We than had a two-day try out where the coaches and the team manager chose a roster of 20 players.

2. How often are you able to meet up, and what do you focus on to make the best use of your training time together?

Unfortunately we have not meet up as often as we would have liked to. This is due to both travelling distance and economy [cost]. But we had the try out in February, and met once in April, and then again in August. Since we have such little [training] time together, we focus mainly on getting to know each other on track and playing together as one team.

3. I see that Team Norway have recently played in a triple-header tournament with Team Denmark and Team France. What did you learn from this experience that you can take forward into the World Cup?

We are skaters from different leagues and teams, with different tactics, track language and derby style. We wanted to use the tournament as an opportunity for us to play together as one team; get to know each other; and to figure out how we can make the most of our skills and players.

In the tournament, we played against Team Denmark and Team France for the first time. They had very different strategies so that diversity was a good learning experience for us. We constantly had to work on being able to switch it up, and to get used to the speed, strength and tactical qualities that more experienced teams possess.

4. Since Team Norway did not participate in the 2011 World Cup, what are your aims for the tournament this year?

We go in to this tournament without focusing too much on rankings and results. Our goal will be to play our very best derby, learn a lot - and hopefully win several bouts! Since it is our first World Cup, we have to see it as a learning experience, but we do look forward to getting some  real fierce resistance and great challenges - both as individual players and as a team. This will be a great way to grow Norwegian roller derby as a sport.

5. Given the expense of getting to Dallas for the World Cup, how are you raising funds and gaining sponsorship?

We have a 'crowd funding' project,  set-up coupons to use when buying tickets online, and we have also managed to get some sponsors. A local tattoo studio - Lucky 7 - have arranged a fundraiser for us. The Norwegian Skating Association is also helping out with the finances, and that's only to mention some! But I think all of us are relying on getting a little bit extra from Santa this year. Hopefully everyone has behaved the last year!

6. And just for fun, does your team have a mascot? If you don’t, what would type of mascot would symbolise your national team? We don't have a mascot (yet), but I guess our mascot would be something like John Snow. We are after all the once defending the wall in the north! It could also be a really fluffy ice bear or a big, hairy musk. You'll see when we meet in December. 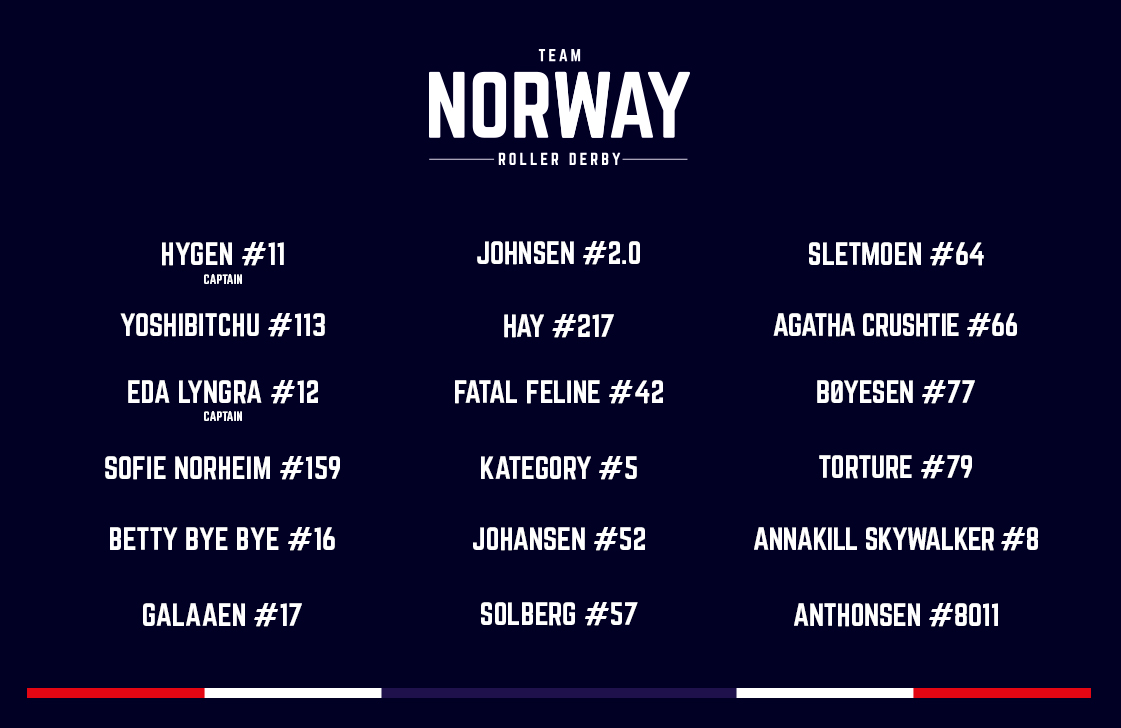