A few months back, Capital City introduced a few new faces into the world of Scottish roller derby when we took part in a co-ed bout with Bairn City Rollers. Forward on a few months and we are at it again. This time it's our very first home bout and our first bout as Capital City’s Mighty Unicorns. Our opponents were Bristol Roller Derby’s Vice Quads, a team which may have been around for a similar length of time as ourselves but had already bouted the likes of Quads of War, SWS b, The Crash Test Brummies and a few more to boot.

The bout itself kept all who were watching on the edge of their seats from the first whistle to the last jam. Bristol may have took an early lead but we worked hard to pull the score line back into our favor during the first half. The scores remained close throughout the game right up to the final whistle, when it ended 173 - 164 in our favor (only a 9 point difference).

Those of you who were there will have recognized a few familiar faces from the last couple of years in our ranks along with our newer bouters from our co-ed game along with some brand new faces. This time we had the pleasure of introducing you all to Bruise Campbell, JAKILL3, Sassenick and Wrighteous. I managed to catch up with three of our new faces after the bout for a quick interview. 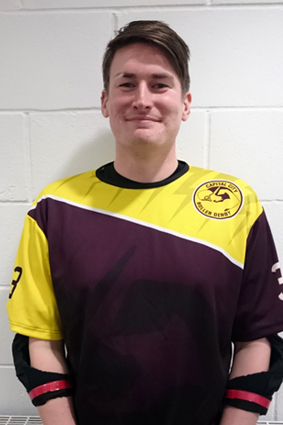 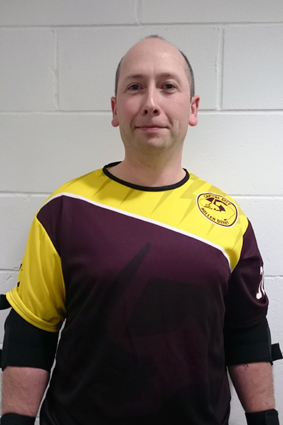 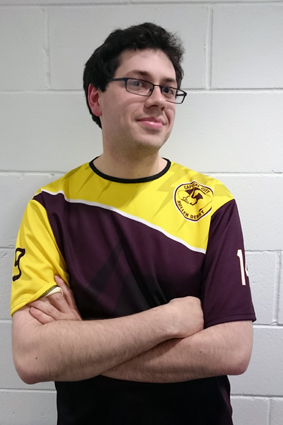 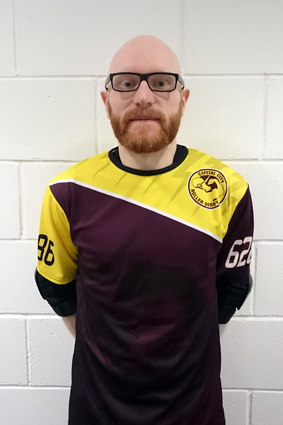 How did you find out about Derby and CCRD?

(W): Found out about derby through a friend, derby name Hazzard, who skates with NTRG. She took me to a few of the AARG bouts and i was hooked, and after I was given a link for mens derby bout i knew i had to get involved.

Unfortunately I missed the fresh meat intake, but luckily NTRG allowed myself to train with them where i passed my mins. luckily got to join CCRD at the next fresh meat where i was asked if i would like to join the team.

(SN): Originally found out about derby through a university friend (Jess E. Ska from GRD), but then my girlfriend got involved in ARRG and dragged me along to an open skating event. I loved it, and as soon as she told me about CCRD, I decided to give it a shot.

Having not skated previously how did you find working towards and passing your mins?

(JK): I found learning to skate with ccrd very easy and the guys at the club are great to get on with, teaching you with a lot of patience and good humor and breaking each lesson down into a skill block at a time.

(SN): Because we're quite a small league, the first six months or so that I was skating I was thrown in the deep end. There were 4 of us who were new to Derby, but the rest of the regular attendees ended up representing Power of Scotland at the World Cup. It was hard not to compare myself to them at first, but as more new people arrived I realised just how much I'd come on, and that gave me a huge confidence boost and it became a lot easier. 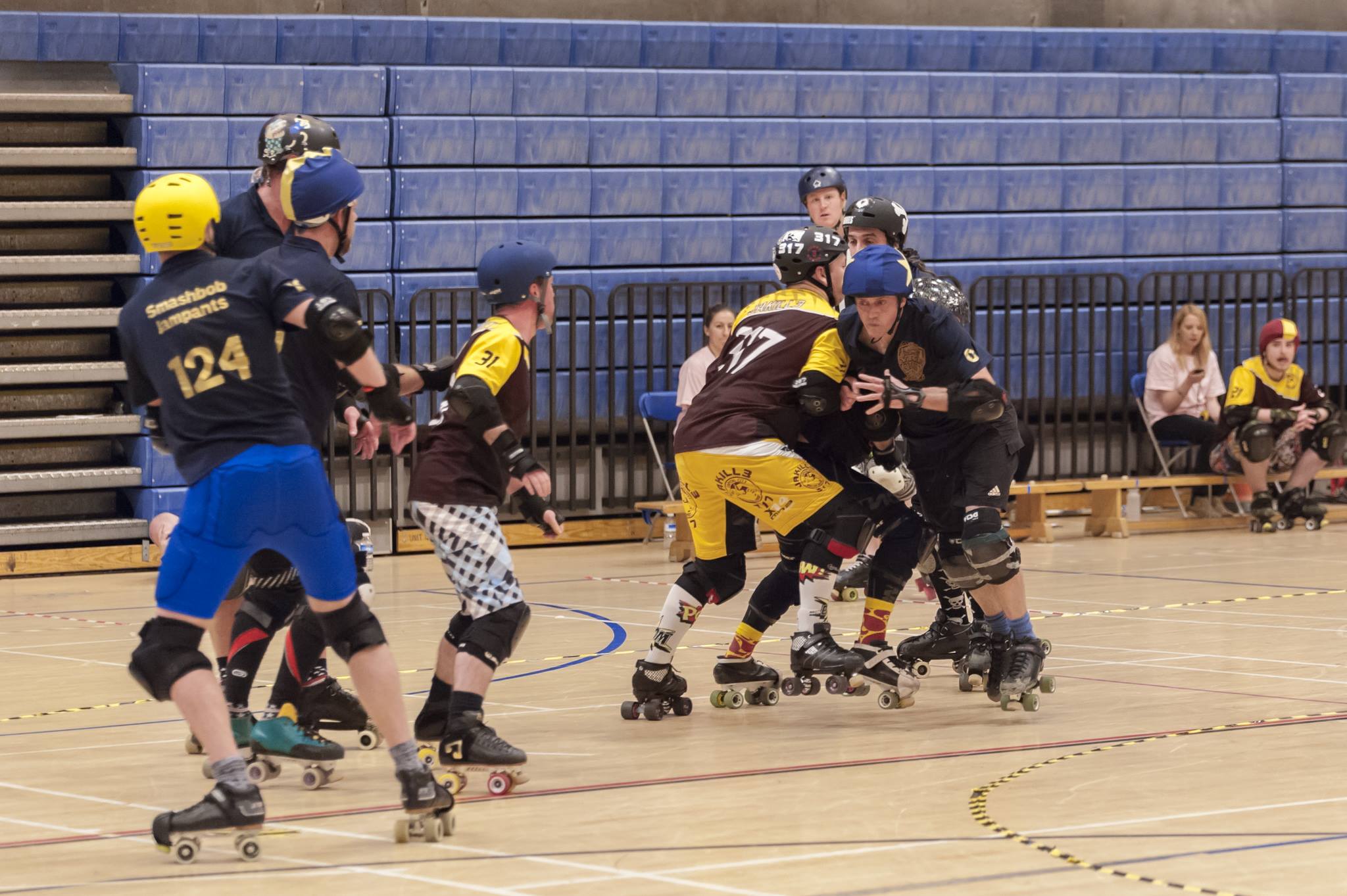 What would you say has been your biggest achievement so far in derby?

(W): It would have to be receiving the award for best jammer at the CCRD bout against Bristol.

I honestly thought HaJuken or Dafty would have won that award and was completely stunned when my name was called. Plus having my family and friends there to see it made it that much more memorable.

(SN): In Derby generally, I was an NSO for the final of the 2014 Men's European Cup, which was an amazing experience.

As a skater, it has to be the first time we played together as a team. We had a closed scrim against Mean City who are much more experienced at skating together, and I felt like I knew what was happening, and that I was being useful. It was a great feeling.

Did you get any pre first bout nerves?

(JK): A little, didnt want to let the team down. But with great organisation and guidance from the more advanced players it made the day a lot more enjoyable.

(SN): Oh yes. I was having a major panic, and I had to go and sit on my own in the changing room with my headphones in to calm down. As soon as the warm up started though, all that disappeared and I was fine.

(W): I was nervous all the way until bout day arrived, where i found myself really relaxed and just pumped up. I could not wait to get on track and just have fun on the day. If you had asked me before bout day i honestly thought i would be so nervous i would have thrown up on the track. 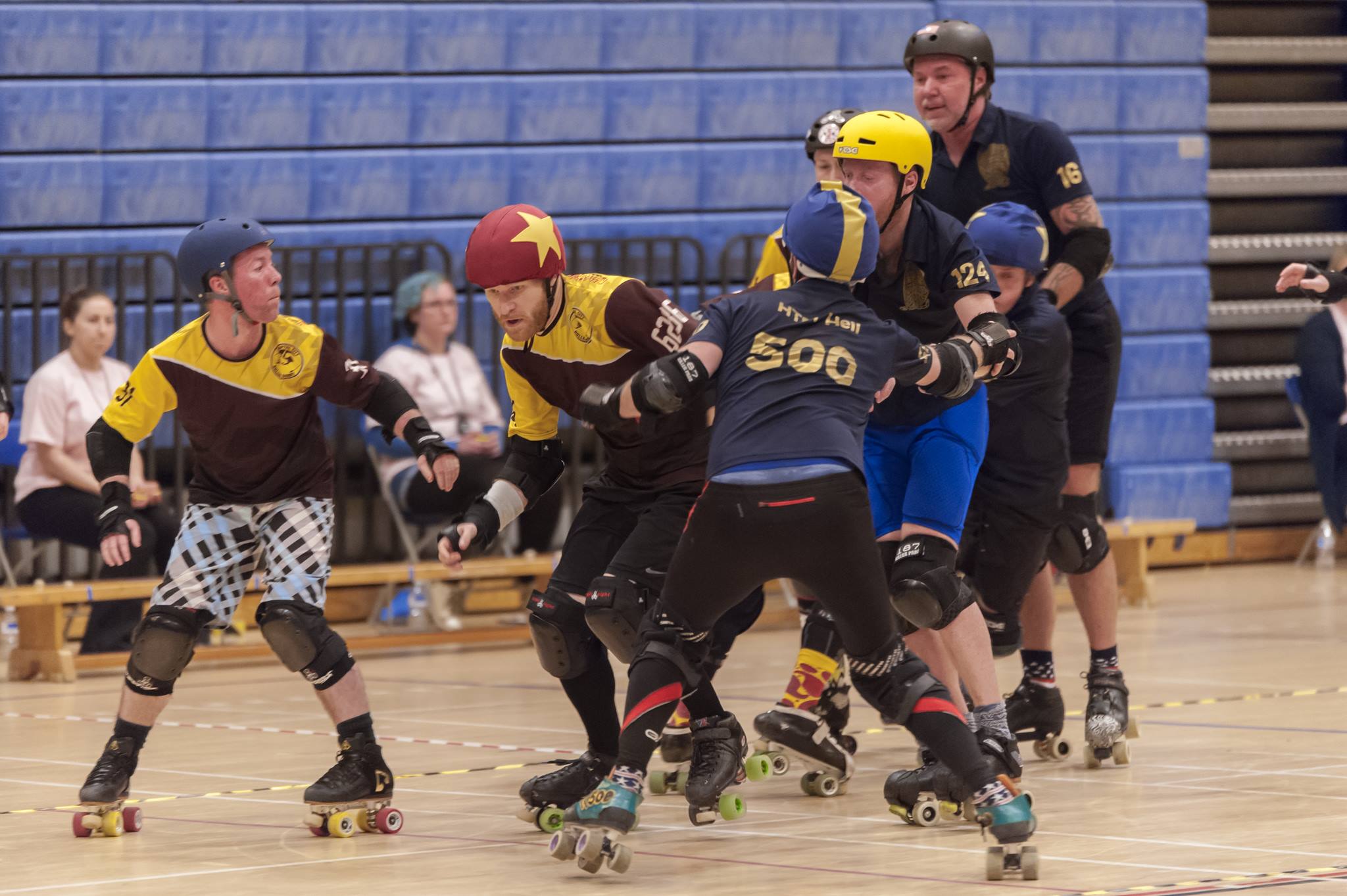 Playing in and winning your first ever bout must be a dream come true, how did you feel after the final whistle and the official score went up on the scoreboard?

(JK): Well it was touch and go at the end, but when the final decision came to our advantage I was over the moon a bit emotional. I feel I worked hard to get there and with the team it made it not only my proudest day but the happiest.

(W): Ecstatic, I had a great time, the team played amazingly and it was a great and very competitive bout. I was all over the place wondering if we had won or not, but when the score became official i was just ecstatic. My first ever bout with a team i had only just joined a few weeks ago and we won against Bristol Vice Quads, could not ask for anything better.

What sticks in your memory most from your first bout?

(SN): At one point I managed to force a track cut. Not a huge thing in the scheme of things, but I did it without thinking, and it was the first time that I can point to that I was playing smart.

(W): There was a point when I was trying to get through the pack as a jammer, when I got hit back slightly. HaJuken was behind me and caught me just before I started to fall, pushed me back up and through the side of the pack to get lead jammer. It was just a fantastic bit of team work by HaJuken and watching it back on video and in pictures shows how good a player he is.

(JK): Just how much work and time and effort goes into getting the bout ready for the day.

Did you get any good advice that helped you on track or prepare for the bout?

(W): I think the best bit of advice was just what we had been given as a team which was to keep our heads, keep calm and have fun. Let them make mistakes, don't get riled up when hit just do what we do best.

(JK): Ginge ..advised us to stay calm all the time which I need, I am easily distracted and get over competitive and can get stuck in the moment.

(SN): "Don't worry about it. You know what you're doing, so stop freaking out. Push yourself in your warm up, and you'll be fine."

Is there any advice you could give others who have their first bout still to come?

(JK):  Stick in, train hard and If your not falling your not trying hard enough. As you have to push yourself to learn quicker. Also remember theres a team to support you. and as my second name sake bobby mcferrin sings "dont worry... be happy" and try and relax 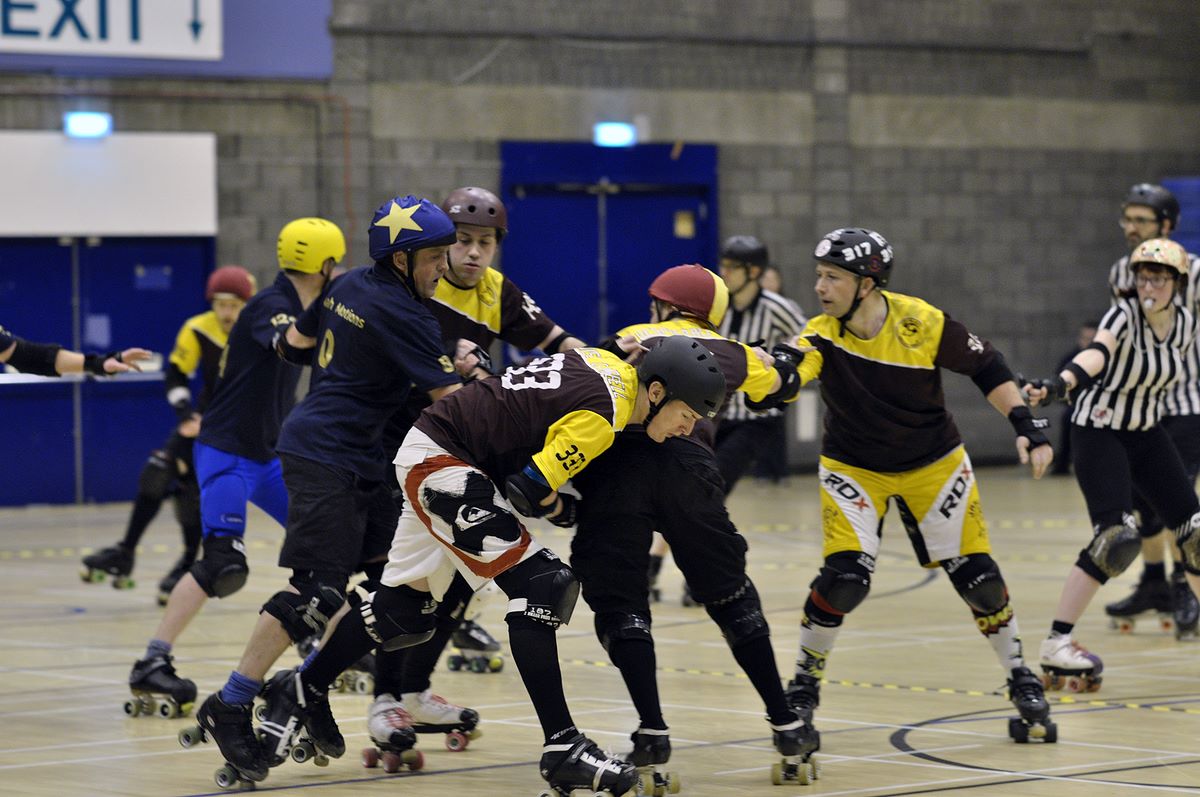 Are there any skaters (Male or Female) who inspire you?

(SN): Far too many. I'm still pretty much in awe of Rose City Wheels of Justice blockers after watching them in the WFTDA champs.

(JK): Well the list is so long I’d love to be as fast as craig (Tequila) and as tough as gregg (Dafty) and but as calm as hannah (Ginge) and as calming as marco (Despicable V). I find that most of the team are great mix of all of the above. Also admiral attackbar from arrg.

(W): Hazzard from NTRG, she puts a lot of hard work into her team and is a fantastic skater. Can not wait till she is skating for team Scotland. Optimus Grime from Mean City and now part of Power of Scotland. He is just a great all round player and have been lucky enough to have trained with and scrimmed against him on a couple of occasions.

Skaters generally set goals for themselves, now that you have played in your first bout what goal's are you now looking to achieve/work towards?

(S): The biggest thing I learned about my skating was that I really need to work on the basics - ploughing especially. In almost all the pictures of me, I'm t-stopping which is really ineffective in a game situation!

(JK): Better bridging, walls, stopping faster also building my stamina and strength and not forgetting my dark side over competitiveness.

(W): To build on my skills and look to improve my all round game, and hopefully one day maybe even try out for Power of Scotland. 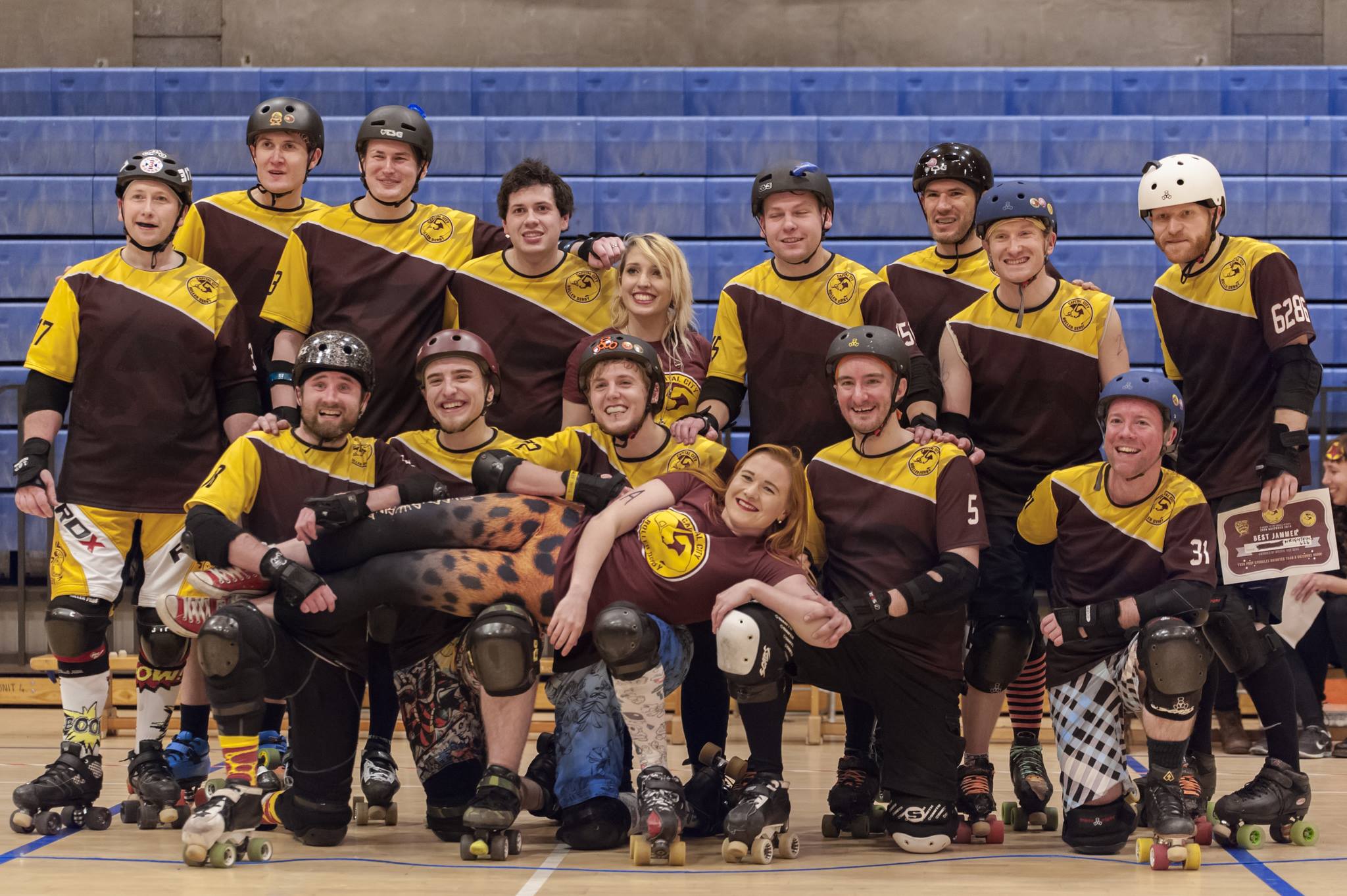