Playing in the world cup of any sport is a half-dreamt hope for 99% of the population – but for Scotland’s male derby players it’s a tantalisingly-realistic proposition.

Whether you’re playing football, Frisbee golf or Hungry Hippos – representing your country is an honour which is rarely bestowed.

You don’t need to have born beneath the sound of bagpipes, raised on a diet of Buckfast and thistles, and able to recite Rabbie Burns at the drop of a haggis.

Neither do you need to be Ballistic McWhistle or a tartan-clad Quadzilla.

You just need to have the heart of a lion (rampant), a willingness to learn and train, and enough team spirit charging through your veins to power a dozen Dillon Panthers.

Power of Scotland (PoS) is hosting the first of its try-outs on Saturday April 18 – a rare chance to put yourself up for selection for the 2016 Men’s Roller Derby World Cup in Canada. 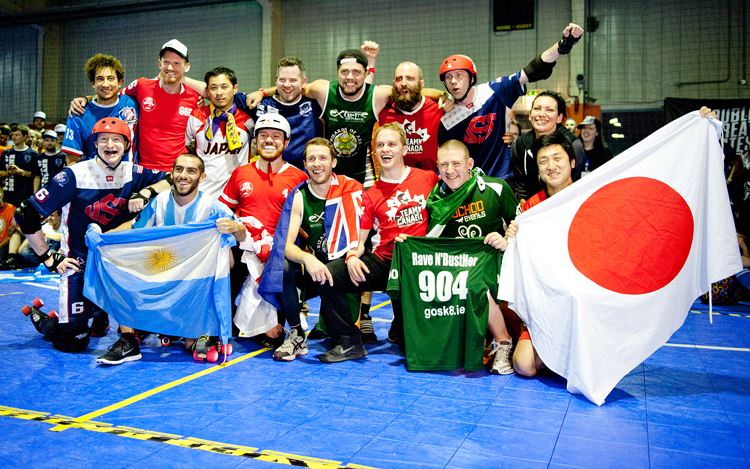 Jammers, blockers, triple-threats and everything in between – all are being challenged to step up and skate out by one of Scotland’s stars at the 2014 World Cup.

He said: “Being selected for PoS was a very proud moment. Since I was a child whenever I was asked what team I'd play for I always said Scotland, so getting in the PoS squad was a genuine honour.

“My advice to anyone considering trying out is ‘do it’. There's plenty of time to train and improve before the next World Cup. Selectors are looking for potential not the finished article. They're looking for team players who take direction and understand the game. Fitness can improve.

“PoS is ready to go to the next level and needs a range players from varied backgrounds. If you think you have a chance then you probably do! Look at the player of the first Euros, Mr Furieux had only been skating for a few months and he was incredible.”

Porky was part of the team who played at the 2014 World Cup and it was an experience he will never forget.

“The World Cup was incredible,” he said. “PoS played out of our skin. I got injured on the first day, my knee swelled up and I got p*ssed on the evening coz I was positive I wasn't going to play the USA the next day.

“I was gutted, but also slightly relieved as I'd watched them that day and I didn't fancy a beating 1000-0. Unbelievably when I woke up my knee was fine! So that meant I could play the USA. Great/oh sh*t!

“The highlight has to be PoS scoring 40 points against the USA. The highest score so far in the World Cup. As we lined up for the first jam of the second half I said to one of the USA team “just let us get one point!!”. He said: "if it were up to me I would, but if I did I'd never play for the USA again". So getting 40 points meant so much coz we earned every single one.

“My second highlight was being voted one of the all-star blockers of the tournament [all-star team pictured above]. Complete surprise! I was half-cut by the time they announced it and I genuinely didn't expect it. I didn't think I played as well as I could have.”

And to think it might not have been … without the timely intervention of Mrs Abrams.

Porky recalled: “My mum’s a Glaswegian and when I told her I could try out for England or Scotland she just answered "when is the Scotland try-out?" - which meant, you're trying out for Scotland and don't test me on this one!

“I'd played the majority of Tyne and Fear games to that point and found I was at a half-decent level. I'd also played quite a few of the lads in Scotland so I knew there was a good standard to work with if I made the cut.

“Also, geographically, living in Newcastle meant I was closer to practice with Scotland than people from Aberdeen. I also thought the support from Scottish fans would be better than any other at the World Cup and I wasn't wrong.”

The first Power of Scotland Try-out is on Saturday April 18 at 9.45am in Grangemouth Sports Complex. Try-out number two is in the same venue at 1.30pm on May 23.

After try-outs the selection committee will choose a training squad of 30 skaters, who will train together once a month and scrimmage until October.

In October the selection committee will come together again to watch a Scotland vs Scotland scrimmage made up of the training squad. Skaters will be marked using the selection criteria along with feedback from the coaches.

From here the 20-man squad which will go to Calgary will be selected and will go on to train till the World Cup.

So what are you waiting for?

Head Coach Hannah Grant (aka Ginge) said: “We hope as many eligible skaters as possible attend one or both of the try-outs. Competing for your country is a pipe-dream for the vast majority of the population – but it could be a reality for Scotland’s male skaters.

“I would encourage everyone who meets the eligibility criteria to try out. It’s going to be a phenomenal journey to Canada 2016 – and we want as many people as possible to be part of it.

“The saddest words in the dictionary are ‘what if’ – you never know what could happen – don’t be left with regrets instead of amazing memories.

“As Porky says, you don’t need to be the best skater in the world – we will be looking for skating skills, tactical awareness, strategy implementation, good sportsmanship and the ability to operate as a team player and not a lone wolf.

“Try and work on all aspects of your game in the run up to try-outs. If you are an amazing jammer then work on rounding out your blocking. If you always skate backwards to block then try mixing it up and working on being able to fluidly block in lots of different styles.

“If you never pivot then work on that voice - work on being able to pull your wall together when it counts or switch up strategies when you need to. Make sure you are up to date on strategy and tactics, and also double-check your rules knowledge is up to date and relevant.”

For the latest news on Scotland – as well as information on attendance requirements, eligibility, submitting video evidence and more – visit www.facebook.com/PowerOfScotland