New Roller Derby leagues are still popping up over Scotland, as we saw recently in our interview with Wee County. Now we're catching up with a new league in another part of the country entirely, Elgin's Helgin Roller Derby! 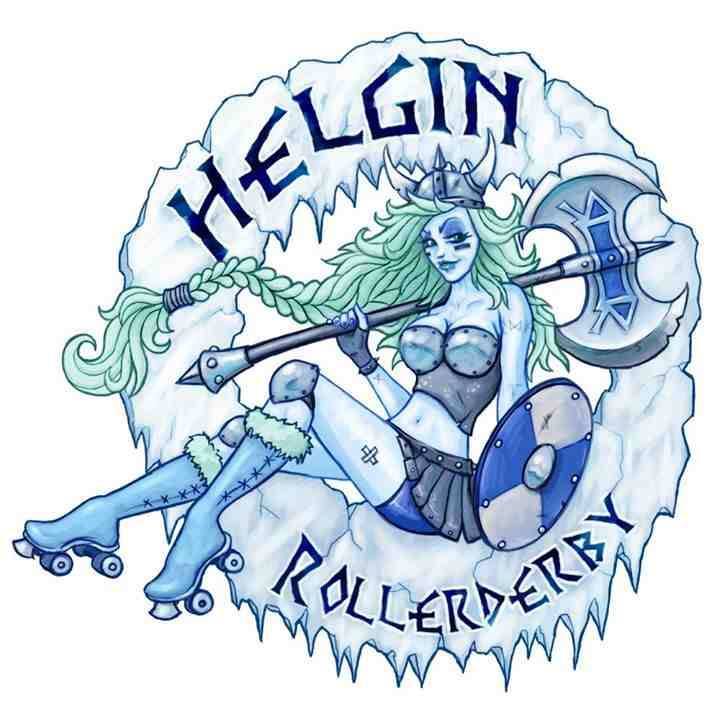 Helgin Roller Derby is now the northernmost mainland Scottish league, thanks to the curve of the coast near Lossiemouth. Can you tell us a little about who you are, and why you decided to found a new league?

Helgin Roller Derby was started by our chairperson, Angela Ellis, in February 2014. She had relocated to Elgin from Dingwall and was looking for a way to meet new people and have fun whilst doing it. Having always been a fan of Roller Derby, starting her own team in Elgin seemed like the best way to do this. Angela used social media to garner interest and by November 2014 Helgin Roller Derby was finally a reality when 5 girls got together and started skating.

Like Wee County, who we spoke to recently, Helgin is a co-ed league from the start. Do you think Co-ed derby is the future of the sport, and if so, why?

Like Wee County, we are also based in a somewhat wee county – Moray has a population of only 93,295, spread across a huge area stretching 2,238 km2 from Cairngorm National Park to the Moray Firth. We think it’s important in areas such as these to be as inclusive as you can. We didn’t want to be turning away members because of their gender. We didn’t even turn away someone because of her age and we now allow people aged 16+ to train with the adult team. In Scottish Law, the age of majority is 16, and if you can get married at that age, why shouldn’t you be allowed to play derby?

We think that co-ed is a good starting point, and hope that in the future, we’ll attract enough members to have a co-ed roster, a female roster, a male roster, and a junior roster, giving everyone in Moray the opportunity to play derby… but that will be a few years down the line. 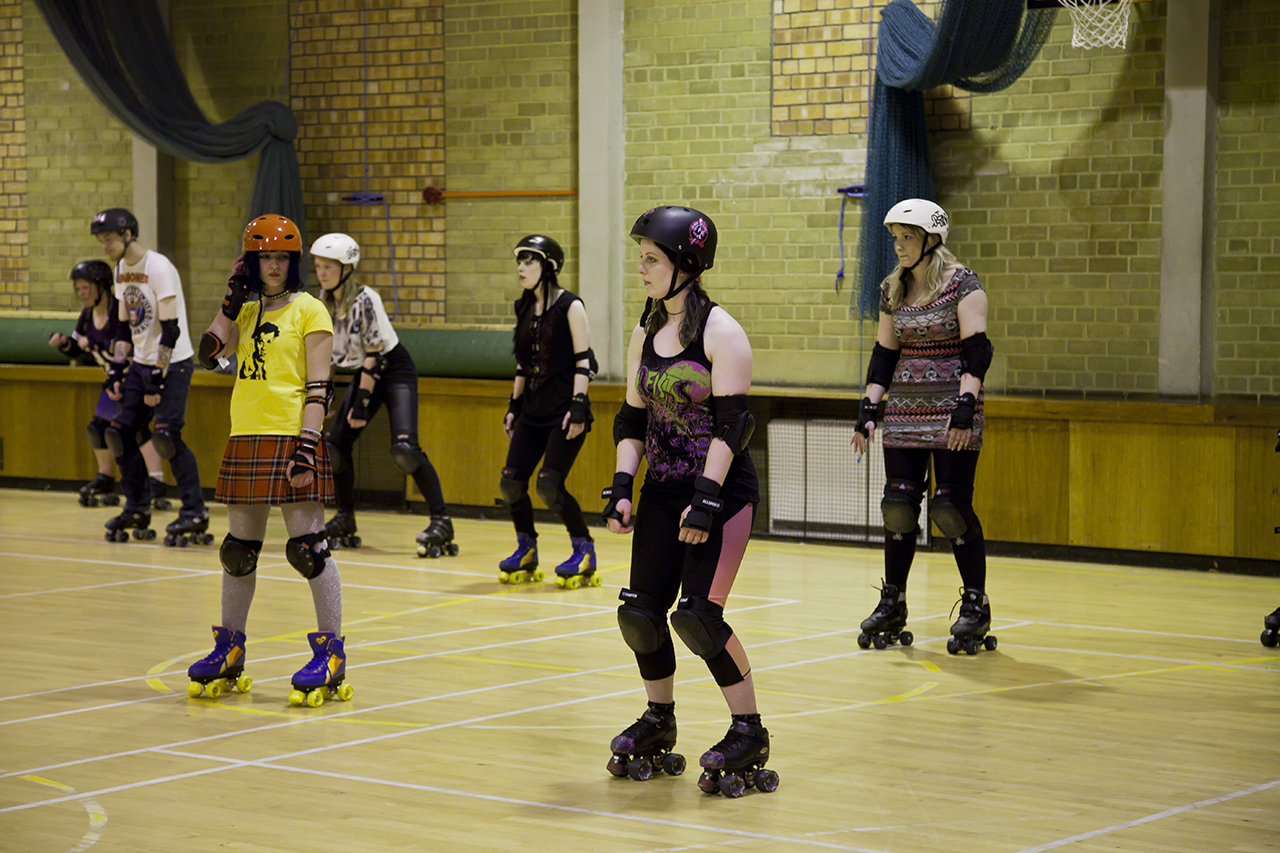 You’ve already held a few fundraisers and promotional events, including a pub quiz with some impressive prizes. How has your awareness and recruitment been like in the area?

It’s been brilliant! We’ve got 283 likes on Facebook, and have attracted 15 regular skating members to the team already – not bad for a team that’s been going less than a year! Each Fresh Meat session we hold attracts more people each time, and we’re looking forward to hosting another in September. Everyone on the team is really proud to be part of it and are fantastic promoters of the team, telling everyone they know how great derby is and how much fun they have taking part.

Our Pub Quiz was great fun, and we’re extremely grateful to all the local businesses for their support. Our top prize was a tour and tasting at local craft brewery, Windswept, and we also had fantastic raffle prizes from Ben Romach whisky, local pizza restaurant Scribbles, and Walkers Shortbread. We’ll definitely be holding more social events in the future, as they are not only good for raising funds, but also for raising awareness of the club.

Helgin Roller Derby’s logo is a rather strikingly blue Nordic lady with a big axe. What inspired your choice of logo, and was it produced by members of the league, or outside talent?

It is said that the town of Elgin was founded by the Norse General, Helgin in the 10th Century when Vikings invaded Scotland. We thought that ‘Helgin’ had a nice ring to it, invoking the idea of Hell and fitting well with the punk aesthetic generally associated with Roller Derby, so this became the team’s name. It seemed only appropriate that our logo reflect the name’s true Viking origins, and our current logo was designed by a supporter of the club, who is an artist for a games design company.

We see that Inverness City Roller Derby and Granite City Roller Girls have both provided assistance to Helgin in starting up. What’s your relationship been like with the Scottish Derby community so far?

We’re extremely grateful to the support we’ve received from Inverness City Roller Derby and Granite City Roller Girls. We try and train with ICRD at least once a month, as Natorious Red is a fantastic coach and really gives us a good workout, improving our skills. She also helps inspire us to improve our own coaching for those who have joined us after a Fresh Meat, and we take away a number of great drills.

Granite City Roller Girls support us through all of our Fresh Meat sessions, providing all the kit we require and two great coaches in Krusty Thud and Frost Damage. They coach the GCRG newbies, so they really know how to enthuse people about Derby, and make them fall in love with the sport!

Other than that, we’ve received great feedback and advice from most of the bouting leagues across Scotland, and we’re really excited to be part of such a fantastic community.

Starting out, many leagues seem to find practice space the most difficult thing to find. You’ve already had one move of location, I believe - but you seem to have plenty of suitable locations to fall back on. What’s been your experience of this?

Like most leagues, we have struggled to find a space big enough to fit a full-size roller derby track, and it looks unlikely that we will be able to host a bout anywhere in the whole of Moray in the near future. We’ve bounced around between four halls, but finally have two spaces large enough to lay out a full-size track, in the games halls in Elgin Community Centre and Milne’s High School in Fochabers, where we train on Saturdays and Tuesdays, respectively. There is also positive discussion in Elgin about a new sports facility being built, which we hope will have a space large enough for the full track, the required safety zones and room for spectators, allowing Helgin Roller Derby to host bouts in the future.

Finally, what are your plans for the rest of the year?

We’ve got another Fresh Meat planned for September, and will have at least one more social fundraiser towards the end of the year.

We’re finishing up our business plan and sorting out a team bank account, so will also be applying for funding in the near future, and hope to be able to buy more of our own kit, so we’re not as dependent on GCRG’s kit for Fresh Meat sessions, and so we have more kit to hire to people who are waiting for theirs to arrive after Fresh Meats.

We’re hoping to be able to move into doing on-skates contact training soon, and will hopefully have some skaters minimum skills passed by early 2016.