Following on from a year of firsts in 2014, 2015 proved to be another busy year for Fierce Valley Roller Cubs. With three fresh meat intakes throughout the year, skater numbers have grown to around thirty 5-17 year olds regularly attending training, across three skill levels. We have retained a large number of skaters from our first few intakes, meaning that at the moment, the majority of our members are level three skaters, although a successful taster session at the start of December should help to boost numbers in levels one and two. 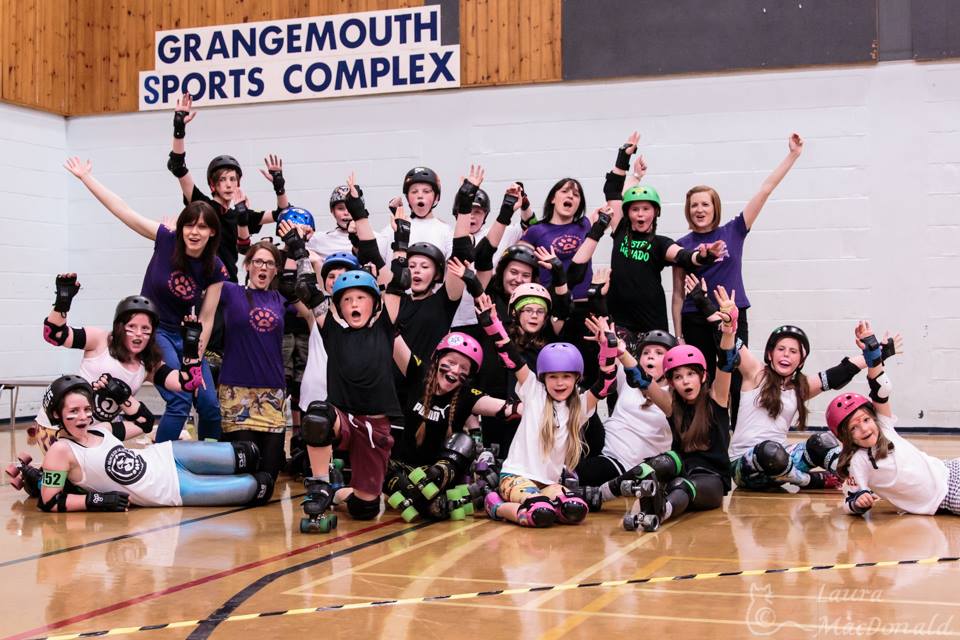 This year, Fierce Valley Roller Cubs were invited by three different leagues – Bairn City Rollers, Dundee Roller Girls and Fierce Valley Roller Girls – to take part in double headers. The game in Dundee marked the first time the Cubs played away from Grangemouth – the Cubs word is spreading far and wide! Several newer skaters played for the first time in public at one of these games this year, and all loved the experience. From a coaching point of view, it’s always satisfying to see everything we work on in training come together in a game. 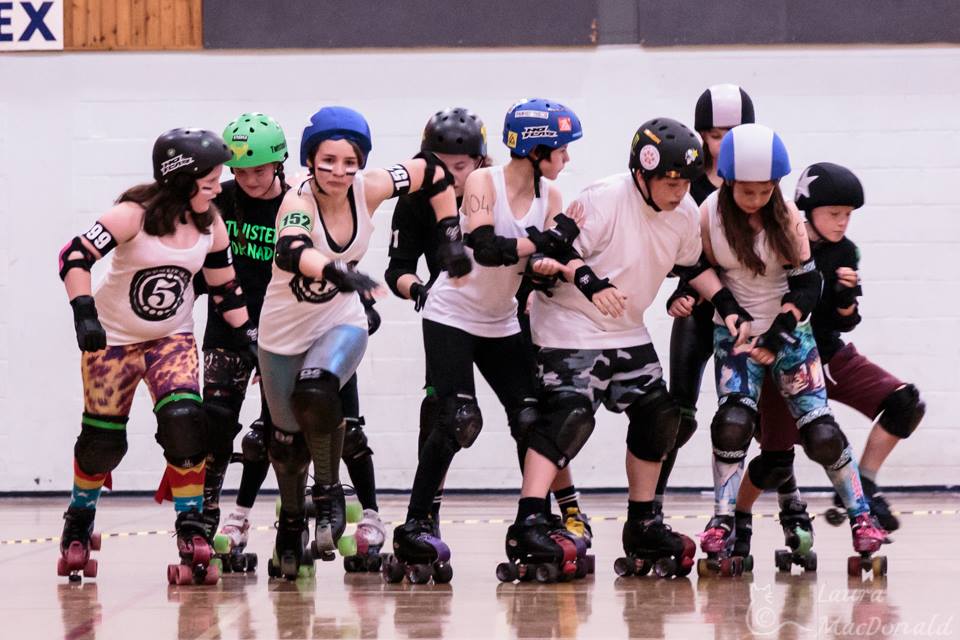 This year also saw some changes to the way we structure our training, due to a change in the JRDA minimum skills, which brought them almost in line with WFTDA’s mins. This meant that our advanced skaters, i.e. those that had passed the “old” level three, had to work towards the new skills. Despite a step up in skill level and difficulty, all of our skaters worked hard and we already have quite a number who have passed the new level three. For 2016, our goal is to play against another junior team, which has proved difficult so far due to the lack of other juniors. Fierce Valley Roller Cubs is almost unique in being both co-ed and open to kids as young as five, with most others being either female only, aimed at teenagers, or both. We are ever hopeful that the growth in junior roller derby will produce plenty of opponents for us! The last words go to a Cub, Hayley:

How long have you been part of Cubs, and why did you get involved? I've been involved with the Cubs for just over a year now. Like many I first found out about roller derby after watching Whip It, and I quickly became obsessed with the sport.

At this point the Cubs were still in the process of setting up and I went to see my first game in Edinburgh, which made me want to play even more.

I ended missing the Cubs starting as i was busy with school and the idea of playing derby slipped my mind, until my dad suggested I see if a junior team had started yet. I then found out that the Cubs had started up and were the only junior team in Scotland, and that they were holding a freshmeat intake in the next couple of weeks.

I was really nervous about joining, despite having bought skates a few years back when I had first found derby and getting a bit of practice in. At the taster session I fell and ended up having to get carried out by my dad and I went to the hospital the next day, thankfully nothing was broken (I did however end up with biggest bruise of my life), and from then on I was absolutely hooked on derby.

Has your involvement in Cubs changed this year? This year I have been helping out at the Sunday sessions for level 1 and 2 skaters as an on skates helper. In doing so my own skating skills have improved, as I've been able to spend more time on skates, but I've also been able to see our fresh meat getting better and more confident at skating and help them develop into great skaters. I've been able to use this volunteer experience to help with my university application and I'm incredibly grateful to all the coaches at the Cubs for this, as skating has given me skills that I can use in other aspects of my life, such as perseverance and commitment, as well as strengthening my confidence.

What was your biggest achievement this year? My biggest achievement has been passing level 3 for the second time, after the requirements were changed to be closer to WFTDA's minimum skills, which included the dreaded 27 laps in 5 minutes. When I first started skating I thought there was no way I could ever skate that fast or be able to do things like transitions and backwards skating. This year I've really seen myself improve, going from fresh meat at the end of 2014 to advanced now. I've also played in two games this year, including my first game ever, which were also a big achievement. Although both times my team lost, it was amazing to see everyone working together and trying their absolute hardest, no matter what position they were playing. I'm sure anyone that was in attendance will say our last game of the year was an incredibly tense and well fought game, with a lead change of 2 points in the last jam! 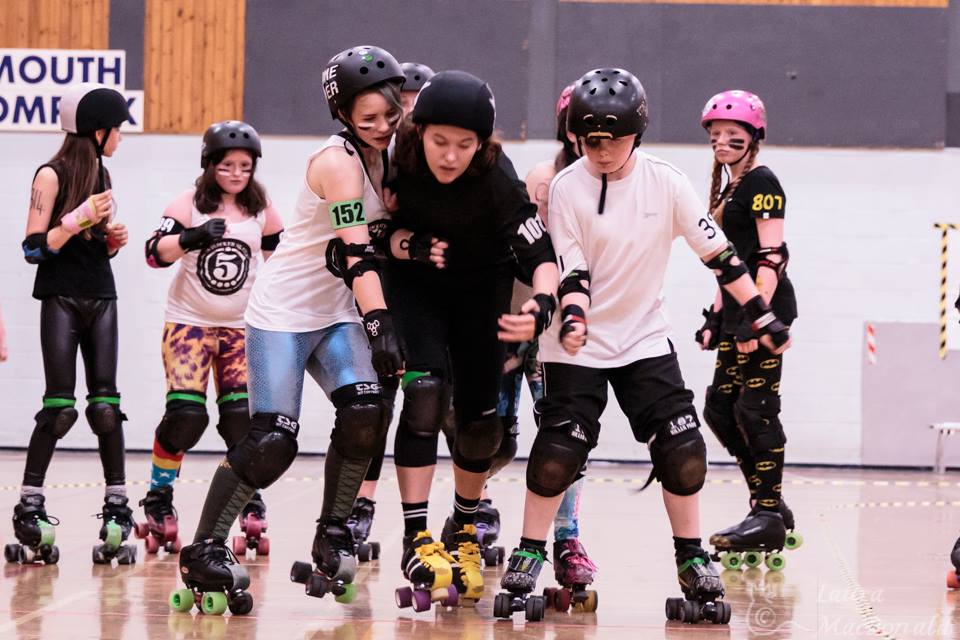 Hayley jamming in her first game

And what was the most memorable thing you did as part of Cubs? Taking part in my first ever game has to be the most memorable and terrifying thing I've done with the Cubs. I was so nervous before and couldn't imagine myself jamming and definitely not getting lead jammer and picking up points for the team. Although I was shaking before I felt great afterwards. I was incredibly proud of myself and my team for working so hard. I was also proud of the skaters on the other team for putting up such a good fight and playing so well. The second game I played in this year was also memorable as I could see just how much myself and the other skaters had improved in only a few months, as I found that we were playing together as a team much better, by playing offensively to help our jammers and using techniques such as star passes.

What would you like to see in 2016 for FVRC? Unfortunately I won't be with the Cubs for all of 2016 as I'll be turning 18, but I would love to see the Cubs playing other junior teams and continuing to grow in numbers and talent. As there are more junior derby teams starting up in the uk I think 2016 will be a great year for the Cubs to hopefully get to show off all the hard work that the skaters and coaches have put in. I hope that even once I've left I'll be able to come back and support the Cubs, and see the young skaters I've trained with continue to get better and better.

All photos courtesy of Laura MacDonald.