In the second of our features in collaboration with UKRDA, we're talking to Team Scotland's outgoing Line-Up Manager, Erin "Rufi-Ohh" Murphy.

Rufi has been involved with Roller Derby since late 2010, when she started skating with the then-named Dundee Destroyers, under a different skatename herself.

Rufi joined Stirling/Falkirk's Fierce Valley Roller Girls in 2011, and captained the team during their first ever (closed) bout. In 2012, she was vice-captain during FVRG's first public bout, against old team Dundee Roller Girls. Unfortunately, due to injury, Rufi had to take an extended absence from skating, but continues to support the league as Line-Up and on other committees, as well as in the Coaching team.

Rufi was Line-Up Manager for Team Scotland Roller Derby during the period including the 2014 Women's World Cup in Dallas. In common with several of the skaters, she performed this role under her legal name, Erin Murphy. 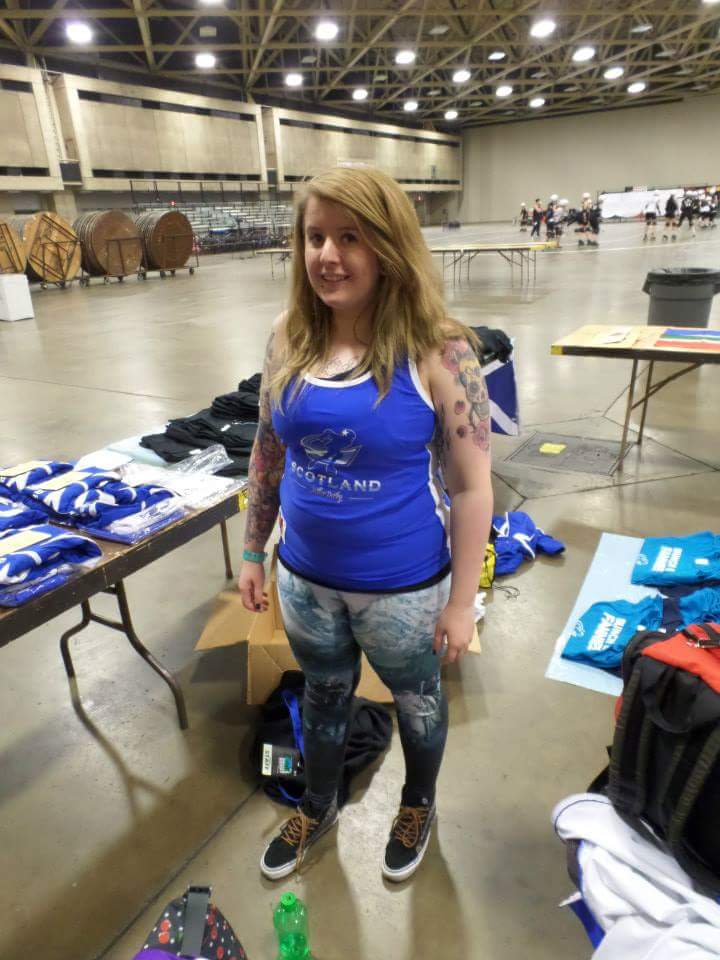 Rufi, you've been in Roller Derby for quite a while, since 2010! What led you to apply to be Line-Up Manager for the Scottish National Team?

Applying for Team Scotland was not an easy decision to make for me but I applied because I believed that although I was from one of the younger leagues in Scotland that I was up to the challenge. I wanted the opportunity to learn and work with great scottish skaters and officials and have fun in the process. As Line-Up, you were also present during the Tryout and selection process for Team Scotland. What was it like being involved in selecting the National team?

Selecting the National team was a big learning curve for me. From the applications, through to the try outs, and also video submissions, it was a very interesting and challenging experience. Although it was stressful at points, it was also great fun and I had a great time! Although running the second round one tryout was a tad scary! The most visible and obvious aspect of Line-Up is beside the track during a bout, managing the selection of skaters for each jam. How did you approach this, under the pressure of the World Cup in Dallas - against such opponents as Australia, for example?

Luckily for me Scotland is full of talented and fantastic skaters which made my job that bit easier, although as always there will always be pressure during games. I was also lucky to have an amazing Bench Coach in Ella [Bella Bang Bang] who was supportive, and who I worked well with, along with 2 fantastic co-captains in Crazy[legs] and Mona [Rampage]. We worked as a unit and their support and opinions were always valued in my approach to game line ups. The Line-Up Role also involves supporting Coaching and training in general for the National Squad. What's the most important contribution to you that you made to Team Scotland's development?

Wow... That is a tough question. I feel that my most important contribution was my time and dedication to the team prior to arriving on Dallas. A lot of work goes on behind the scenes before the tournament that no one ever really sees, but that is what keeps the team running and that is what gets us there! What's the most important thing that being a managerial/coaching role for a National Team has taught you, and what was the best memory of the whole TS experience?

The most important thing it taught me was to be confident in my own skills and my knowledge of the sport. If you are dedicated you will get to where you want to be! My best memory.... That is tough. I have so many amazing memories from the whole experience. From the sleeper bus to Cardiff, to my line traveller award in Dallas. The one moment that sticks in my mind was when Louise 'Splat' Kerr took the star pass during our game against Australia and scored that important first point. The reaction of the crowd, the reaction of the team and the look on Splat's face when it all happened. That to me is what roller derby is all about. What advice would you give the next Line-Up Manager for Team Scotland?

My advice to the next Line-Up Manager - expect to work hard, expect to learn, expect to be pushed to your limits but enjoy every second of it. You are part of Team Scotland for a reason.

If you would like to follow in Rufi-Ohh's path, and take on the role of Line-Up Manager for Team Scotland, working towards the 3rd Women's Roller Derby World Cup, you can apply here [Applications close Midnight Monday 7 March]: https://drive.google.com/file/d/0B-XTeOpUghUFdUJjMGQxczVVMnM/view