Continuing our series of Team Wales Interviews, in collaboration with the UK Roller Derby Association, we present Buccaneer Betty Fear, who skated on the first Team Wales.

Tryouts are currently open for the next Team Wales, who will compete in the 2017 Roller Derby World Cup. To learn more about the Tryouts, read the FAQ, and the Application Form. The Application Form also has details of the dates and locations that Tryouts will occur, in April and May. If you would like to represent Wales internationally, then sign up to try-out! 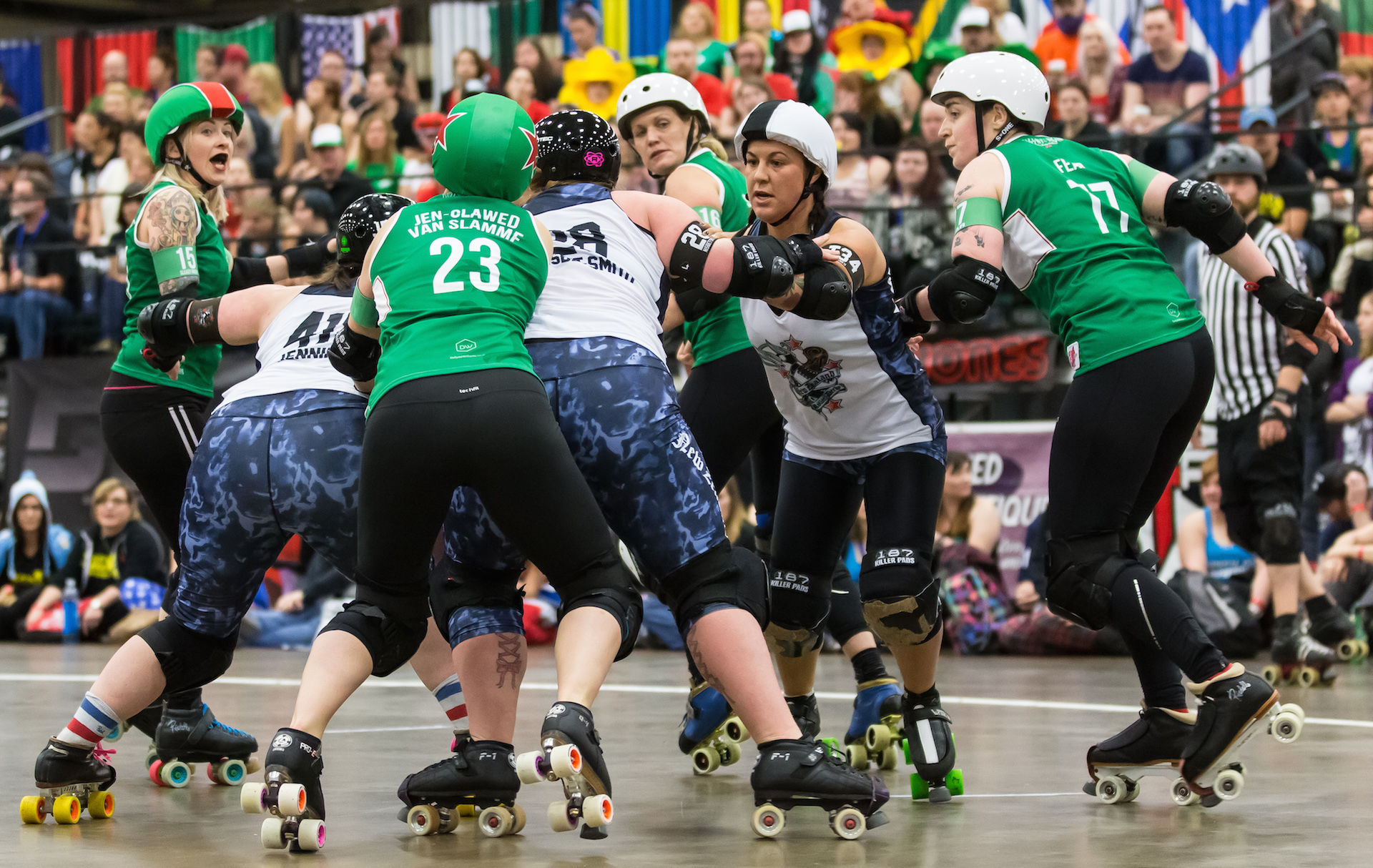 Fear skating in the 2014 World Cup (against New Zealand), on the right. (Courtesy Sean Murphy)

Buccaneer Betty Fear started out in Roller Derby with Severn Roller Torrent in 2011. She remained with Severn, skating and coaching until 2015, when she joined Tiger Bay Brawlers. She was an active member of Tiger Bay during their first and only season in British Champs. She attended the 2014 Blood & Thunder World Cup as a member of Team Wales, playing against Norway, South Africa, New Zealand and Puerto Rico. Before her retirement from Roller Derby at the end of the last season, she blogged on roller derby and other topics at It's a Hard Block Life.

So, the obvious first question is at the beginning: why try out for Team Wales?

It is so hard to write about why I tried out without relying on cliche. I think it is because it is such a big set of feelings that you run out of words... Trying out to make a National Squad was not a life experience that I thought I would have. Roller Derby is still at this special, magical time where people who have come to the sport as an adult can have dreams like making a National Squad and have the chance to turn them into reality. If you bring the work and the commitment and the courage to put yourself on the line, you can make it happen. Our sport might not be like that forever (have you seen those juniors??), so grabbing that opportunity now, while we are in this meeting place where hard work can turn you into an elite athlete... was an obvious. At the point of trying out, even the trial felt like a win and an experience.

Tell us a bit about the mental game of the tryout process. What did it feel like to go through the tryouts; and wait and then discover you had made it onto the roster?

The tryout experience was utterly unlike I expected. I thought it would be this pressurised, lonely experience where everyone was out for themselves. Nope. Within minutes of arrival the skaters trying out were forming bonds with each other. There was a palpable sense of community and support. It was like the larger Roller Derby community, but squeezed into this incredibly intense experience. During drills people were supporting each other and rooting for each other. During scrimmage we were urging each other to jam and to pivot. Physically and mentally it was one of the toughest experiences I have gone through. The trials were long, demanding and I think they were designed to ensure you were pretty exhausted by the time you scrimmaged. Waiting for the results of the first round of trials was agony, the elation of finding you had made the next round was swiftly followed by the awful realisation you had to do it all again, with more at stake... Finding out I had made the Squad was an incredibly proud moment. I had spent so long prepping for those trials... I had spent all my money hiring lonely sports halls  at early hours on weekend mornings, I had trained relentlessly in the gym, I'd read pretty much every sports psychology book I could get my hands on. I'd gone all out to make the Squad. Knowing I would wear a Welsh jersey was incredible.

Training for a National Team is a significant additional investment for a skater, on top of their existing league commitments. How did you manage the time needed?

For the time I was in the Squad, there was no balance in my life. It was Roller Derby, all in. I worked, I played derby and I cross trained. I mumbled 'sorry' to my brilliantly supportive partner as I disappeared every weekend, usually on both days, for League and Squad training. I spent my money on Roller Derby travel, the gym and physio. I missed the wedding of a close friend and countless nights out and weekend adventures. At some point it stops being about you, and becomes about what you owe the Squad. You know that there were other skaters who would have done anything to have the spot on Squad you have, you owe it to them to go all out. You know that your team mates are missing birthdays and weddings and not seeing their kids in order to train, you owe it to them. And there is always the thought of not letting your Country down. You are going to skate out with a Welsh dragon on your chest, you want to show the World (and the Welsh) that we were serious about this sport.

In the lead up to the World Cup, Wales played several other games, including a kind of home-series (Road To Dallas) against Ireland, Wales and the West Indies. What do you think you and the team gained from these games?

The games we played in the lead-up to the World Cup were an incredibly experience. I think the proliferation of European (and UK-based teams) really lifted the quality of derby that was played at the World Cup. By the time we got there we had played half a dozen games as a National Squad - that makes a huge difference. Instead of working out kinks in our game at the World Cup, we had a squad who had skated together, understood each other and had developed our game. We also got to learn from the experiences of teams that had skated in the first World Cup. Scotland and Ireland had such strong, experienced Squads. Playing them beforehand gave us a chance to learn and adjust. The West Indies were great to play against as well... they were such a tough, hard-hitting Squad... it totally warmed us up (tenderised us??) for the hard-hitting play we experienced in Dallas. It also gave us a chance to experience skating as Team Wales and the whole different set of nerves that comes with that. Finally, it meant that more players had the experience of playing for their country. Not everyone made the Squad in Dallas, so some great skaters who didn't get the chance in Dallas still had the incredible experience of skating for their country.

Representing Wales in Dallas, you played against New Zealand, South Africa, Norway and Puerto Rico. What was your favourite game, and why?

Each game was a special and intense experience and created memories that will stay with my forever. South Africa were a great, physical side, having the time of their lives and their spirit was infectious. New Zealand were, well, HUGE! They were formidable and it was brilliant to have the chance to go up against them. Puerto Rico was a joy of a game - the final of the one we played at the World Cup and just a riot. But my favourite... was Norway. They were skilled, strong and relentless, but we had a moment where Wales came together and realised that everything we had worked for was now and that this was our chance. We went back out on track with a vengeance, lifting our performance. We lost, but that switch in how we were operating on track was special. It was a moment of mental resilience and this incredible sense of skaters going out there for each other. We did each other proud.

Are you planning on trying out for Team Wales again?

I've retired now - full of dreams made reality! But to anyone considering it - go. Try out. Yes: you. Imagine being able to say you were at trials for a National Squad... imagine being able to say you made it. Get your butt to training, get to the gym, get watching footage and grab yourself a derby dream. You will get something from any part of the process you go through. Go get it, skater!

I'd love to see it in Europe: the cost for so many teams to travel to North America was prohibitive. I'd love to have it closer to home, and see more European teams able to have all their skaters there and more skaters get the chance to have their moment on track. Who would I like to see Wales face on track? It's got to be Norway. But this time with a different ending...