There's a lot of conversation this weekend and today about a roller derby event in the USA.

However, this has overshadowed another tournament held last weekend (15, 16 October): the second Daga Denter Tournament. This yearly event sees teams from Southern/Central Europe compete (under WFTDA) rules to determine a champion. The tournament is the "traditional" in derby terms single-elimination with consolation rounds structure.

[For those of you wanting to catch up on the scores, Flat Track Stats has you covered. Our own timetable has the FTS links for bouts, plus links to the livestream archive (which will be updated to precise offsets for each bout by the end of the day).]

Unfortunately, due to delays and roster reductions resulting from injuries earlier in the second day, the 7th Place playoff was cancelled (as marked on our timetable). We thought this was an ideal opportunity to see what we can predict about the placements, using our usual statistical tools.

Firstly, predictively, we can use the new SRD Rankings for October 2016 to predict what was most likely to happen.

So, as can be seen, we mostly predicted the tournament correctly, except for the strong placement of Milano. As the hosts, however, they will have benefitted from home team advantage, but we estimate this to be on the order of +0.01, not enough to bridge the rating gap. It's also true that Vienna performed unexpectedly poorly against Zurich, so it may be that they are in fact overranked by us.

Secondly, however, we can also use our Bayesian inference toolkit to analyse the tournament itself, isolated from past expectations. As always, this produces graphs showing the estimated range of team strengths (relative to the winner - in this case Porto), with height showing the likelihood of that result. 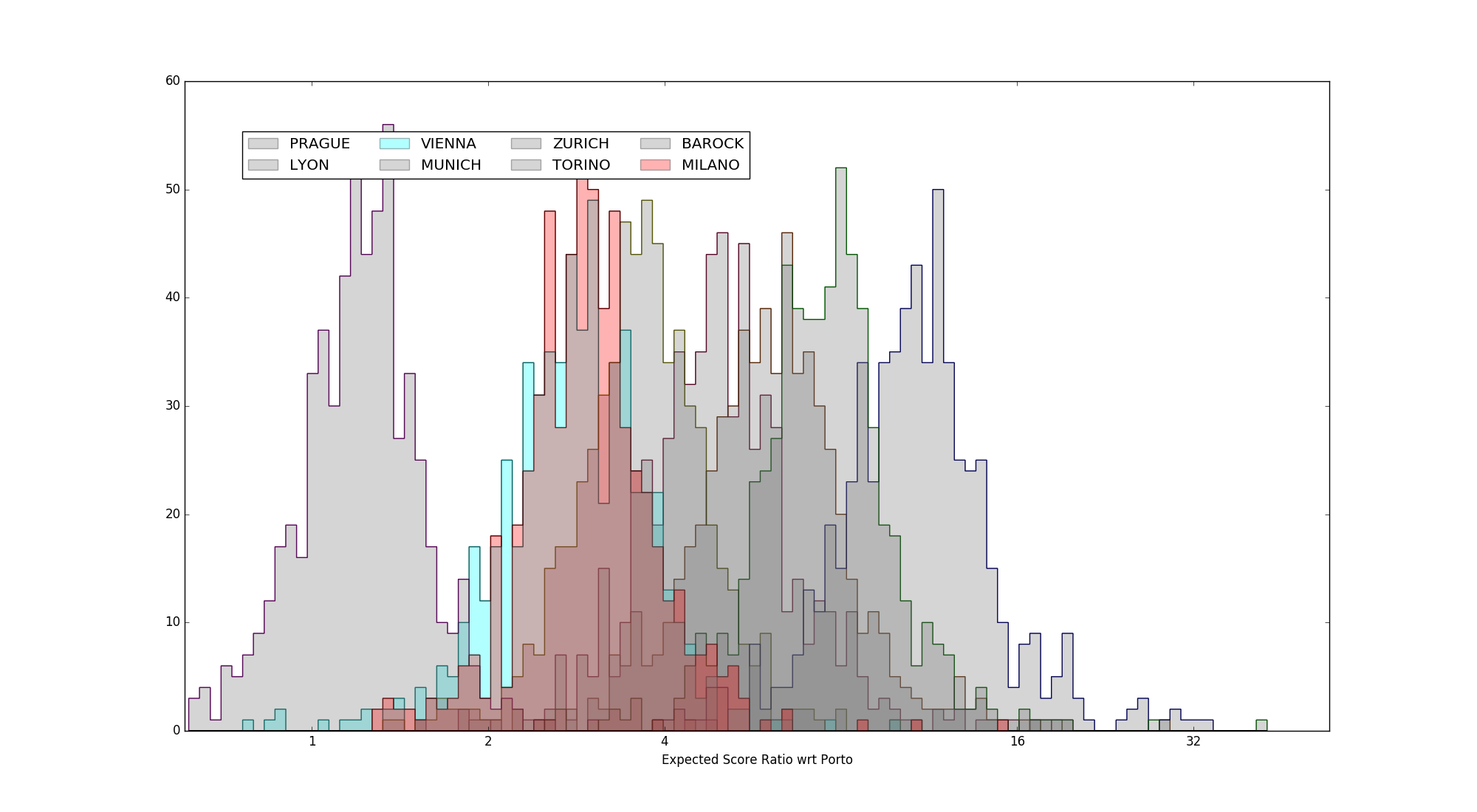 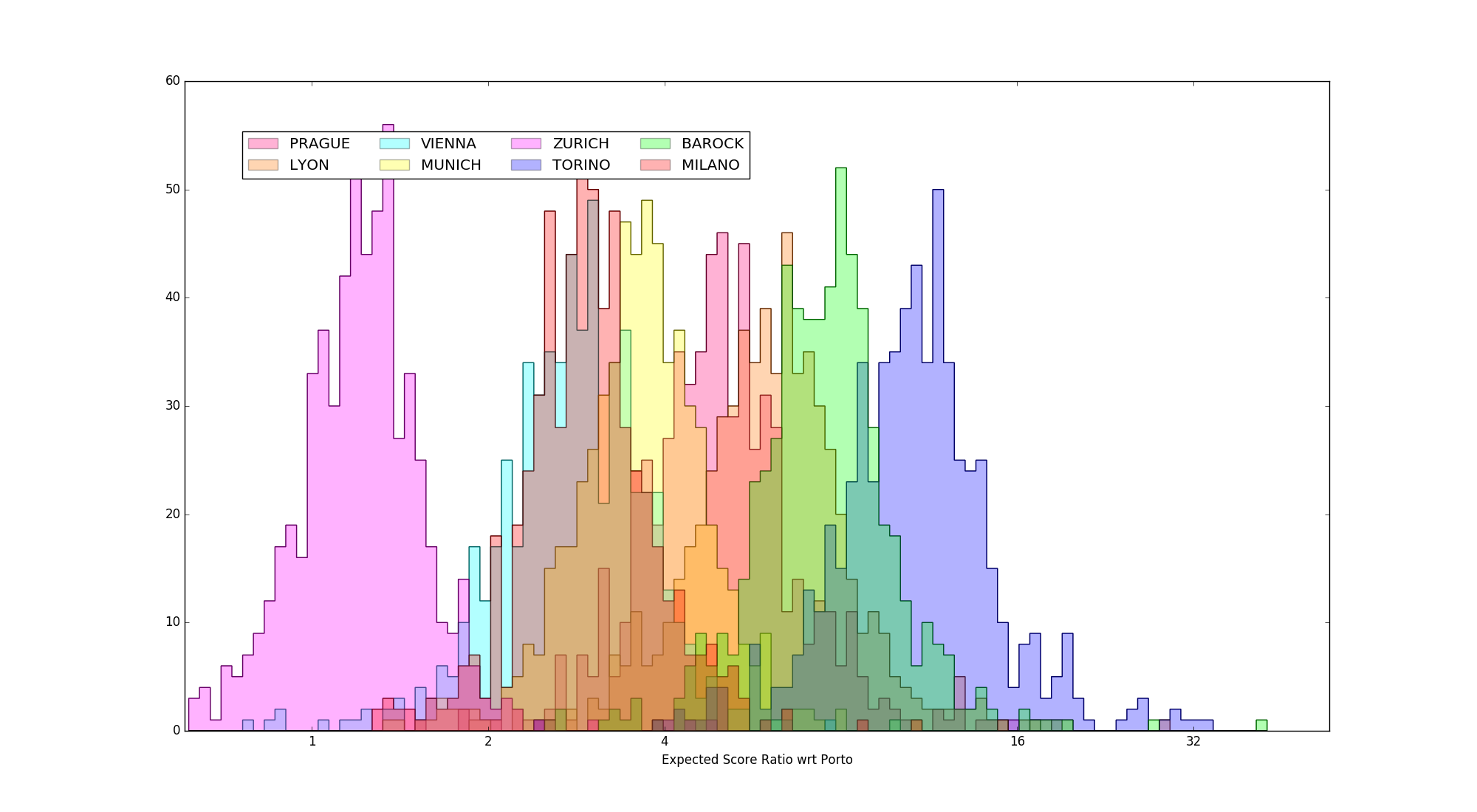 Fully coloured image of all strengths, relative to Porto.

Interestingly, as can be seen in the highlighted image, inference strongly supports the evidence that Vienna and Milano are actually of near identical strength (and that Zurich is significantly stronger than the pair). Taking into account home-team advantage, we're pretty confident that Vienna is overranked in our SRD Rankings at present (or had a really bad tournament). It's also true of Flat Track Stats, who recorded this as a near upset , expecting a narrow win and getting a comprehensive one. This also means that we predict that Zurich would have attained 2nd place, if they'd been in the other half of the bracket and able to play the hosts. [This kind of technical misranking is pretty common in single-elimination tournaments, which is why our blog position is that they should be avoided if possible].

Inference also supports the reverse ranking of Barockcity and Lyon for 7th/8th place, supported mostly on their relative performances against Torino (the only team they both played). (Again, looking at Flat Track Stats, it appears that they also rated Barockcity higher than they performed - the rating of Barockcity has been revised down almost 20 points in FTS as a result of DDT2016, taking them from close to Lyon to noticeably below).

We expect that in our November monthly update for the SRD Rankings, Barockcity and Vienna will drop in ranking.  We're also pretty happy to declare Lyon as our 7th place finalist from the tournament.

We would also like to congratulate the Harpies on a great tournament, from a remote viewers' perspective, with good streaming and regular updates; and Roller Derby Porto on a convincing win.