And after covering a EuroClash team yesterday, today it's time to meet another of the attendees at Okinawa's Tomodachi Derby Tournament, also 24th to 26th March, 2017.

Today's interviewee is the team travelling the furthest to attend the tournament, from northern Alaska, it's Fairbanks Rollergirls. Dating back to 2009, Fairbanks joined WFTDA in the 2011 cohort, and have maintained a pretty solid regular season, mostly competing against other Alaskan leagues. They will be competing in the WFTDA sanctioned tier of the Tomodachi Tournament, against the host leagues and Pacific Roller Derby of Hawai'i. 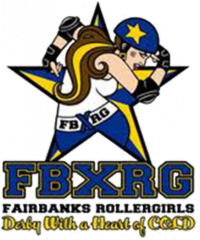 I feel really great about the state of Alaska Roller Derby. It is steadily growing and the teams are eager to learn and getting better every season. It's nice to have a small feeling community of skaters, which I think a lot of places might not have. Many of us are friends with each other and are able to develop long-lasting friendships because of it.

As far as playing the rest of the US, there are teams that do travel to the lower 48 for game play. Rage City All-Stars travel to get higher-level sanctioned games and tournaments, as well as their B-Team Orange Crush went to Spokarnage last year. Denali Destroyer Dolls from Wasilla made a trip to a Colorado tournament last summer. Sitka Sound Slayers are bringing up a Rat City home team, Throttle Rockets, for a game in February as well.

Fairbanks themselves have hosted the annual United We Roll tournament for Alaskan derby. Can you tell us a bit about the tournament, how it came to be (and if it will be running this year)?

The Fairbanks Rollergirls were the original creators of the United We Roll Tournament in 2013 and haven't hosted since. Financial burdens had us cancel our portion in 2015 and a working group between the leagues saved that years tournament, being hosted by Denali Destroyer Dolls in Palmer.

The tournament is meant to be a traveling tournament within the state, but it was decided amongst the leagues that the best place for it would be in the Anchorage, Wasilla areas because it is a more central location, making it much easier for teams to travel. Fairbanks is 400 miles north of everyone else.

The Boom Town Derby Dames have been the hosts the past 2 years in Wasilla, and have done a great job with it we're all anxiously awaiting the details!

Fellow Alaskans Juneau Rollergirls made something of a splash in the first Japanese tournament last year… is this something that Fairbanks are intending to live up to at the Tomodachi?

Who doesn't aspire to be the Juneau Rollergirls? They went last year with 6 or 7 people? Thats crazy! AND they did amazing!! We love them and definitely have them in our thoughts while we prepare for this year's tournament. We hope to be a remembered force in the tournament, for sure!

As far as we can tell, Fairbanks have only played one of the Tomodachi competitors before - Hawai'i's Pacific Roller Derby back in 2010! - how are you planning for taking on so many new teams, and so far away? We often have a full season and play many tough games throughout which have helped us. We just got back from a mini 3-team tournament with full-length bouts that was a good indicator for us to see what we need to focus on or what we are getting right. Two of our games were literally back to back with 10 minutes in-between and we did pretty well, losing by just 10 points. We are very good at adapting on the fly and playing our game, so I think that will help us at the Tomodachi Tournament.

And, in the downtime between bouts, what are you most looking forward to seeing in the other divisions at the tournament?

We are looking to see some great gameplay by everyone involved! Roller derby is a fantastic sport to watch on all levels and we look forward to cheering everyone on!

What's next for Fairbanks, in 2017, after the Tomodachi?

After Tomodachi, we will turn our focus on the UWR State Tournament which is May 5-7 this year. We are also chatting with another team about a June game, but after that will be our summer break.

Alaska Derby typically runs September through May-ish because of the short summer season in which a lot of people travel for work fishing, etc. It's hard to get people to practice when its near 24 hour daylight, there's just so much to do!

We are already booking for next season and that kicks off with our Breast Bout Ever, a mashup game that benefits the Breast Cancer Detection Center of Alaska. Skaters get to choose breast-related names and there's a lot of pink and tons of fun! It's a nice shake-up to skate with people from all-over the state as your team!