As the second ever international tournament in Okinawa, Japan grows ever closer, we're bringing you another interview with a team attending the Tomodachi Derby Tournament, March 24th to 26th.

The last of our interviewees in the WFTDA Sanctioned tier of the tournament, Kokeshi Roller Dolls are one of the two "local" leagues, based in Okinawa itself. KRD can contest with Tokyo Roller Girls for the title of "oldest league in Japan", both being founded around the same date.

In the Japan Open, Kokeshi were the only Japanese team to defeat the might Juneau Roller Derby. Previously to that, the team has also played international roller derby away, at The Big O in 2014. KRD skaters also contributed to the teams competing at the first ever public roller derby bout in China! 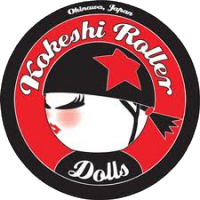 KRD were happy to answer some questions for us.

As the host league, and member of the organising Japan Derby Tournament Committee, what are you most proud of about the Tomodachi Tournament?

KRD: We’re technically not the host league; we’ll be hosting a revamped tournament next year called the Far East Face Off, but this year our role on the JDTC was solely to cover the marketing aspect of tournament preparation. One of our league members is a graphic designer, and was able to design the logo, banners, tees, and tournament program, which was a massive bonus for the JDTC. We're impressed that the committee, which first formed in September, was able to overcome a language barrier and pull off the planning of a tournament in under six months. Many of us worked overwhelmingly hard to make that happen.

In the last tournament, Kokeshi played the three visiting A teams from outside Japan, pulling off a win against Juneau in their last bout of the tournament. What lessons are you taking into the Tomodachi, when facing Fairbanks and Pacific in particular?

KRD: We’ve been practicing specific defensive strategies and better communication, and even increasing our endurance and strength training off skates. I think last year, our energy was focused on running the tournament, rather than practicing effective strategies. This year, our athletic staff isn’t involved in the tournament operations, and can focus on leading the team. Additionally, we were caught off guard by the slippery floor surface; the arena floors had recently been resealed and polished, and many of us did not have grippy wheels that first day. Lesson learned! We’ll be prepared for any surface this year.

You've played both Tokyo and D4 [Devil Dog Derby Dames] fairly regularly, of course (and D4 are particularly close by…). How are you feeling about your rematches against them this year?

KRD: We didn’t bout either of these leagues last season, and with the high turnover rate due to military relocation, many of our skaters have never played against these leagues. We have had opportunities within the past season to play fun informal mixed scrimmages with members of TRG and D4, so keeping a competitive mental focus might be challenging since we’re used to having fun on the track. Both leagues have some very skilled skaters that we’re excited to go up against. Our goal is to practice effective communication and teamwork now that our skaters have had a whole season to train together.

Outside of your division, what teams and bouts are you most looking forward to at the Tomodachi?

KRD: We're interested to see the Pan-Asian Spring Rollers play together. KRD was given the opportunity to skate with many of them in Beijing last summer at the HeForShe roller derby expo, which was a phenomenal experience. It sounds challenging to have a team comprised of women from different leagues all skating together for the first time, and we’re excited to see how they adapt to working together on the track.

What's next for Kokeshi, after the Tomodachi?

KRD: KRD is undergoing an exciting rebranding campaign! We are renaming the league “Okinawa Roller Derby” to better represent our location when we venture off island to play in tournaments. We are heading to Kaiserslautern, Germany for a tournament this June. We want to expand our horizons, challenge ourselves, and see what we can accomplish as a travel team. Then we’ll take the summer off to refocus on recruitment and, of course, put in some hours at the beach!