Tournaments have always been a popular thing in Roller Derby, and as the community both grows and becomes more concerned with cost- and time-efficiency, this is only becoming more true. However, with a standard WFTDA-rules bout needing at least 90 minutes (and preferably 2 hours) blocked in for it, and around 14+ officials if fully-staffed, hosting large numbers of teams can be tricky, especially if you want a tournament structure capable of providing a "winner".

As a result, there's a huge number of alternative rules for shorter game formats, thus allowing more games per day, and more teams per tournament: from the 2 minute games of Sur5al, through 21 minute Derby Sevens [both with reduced rosters too], through various ad-hoc 30, 40 and 45 minute modifications of the rules.

Few of the above bout systems change much about the rules of the game beyond timing (and sometimes roster restrictions) - they all take the same number of officials as WFTDA standard games. 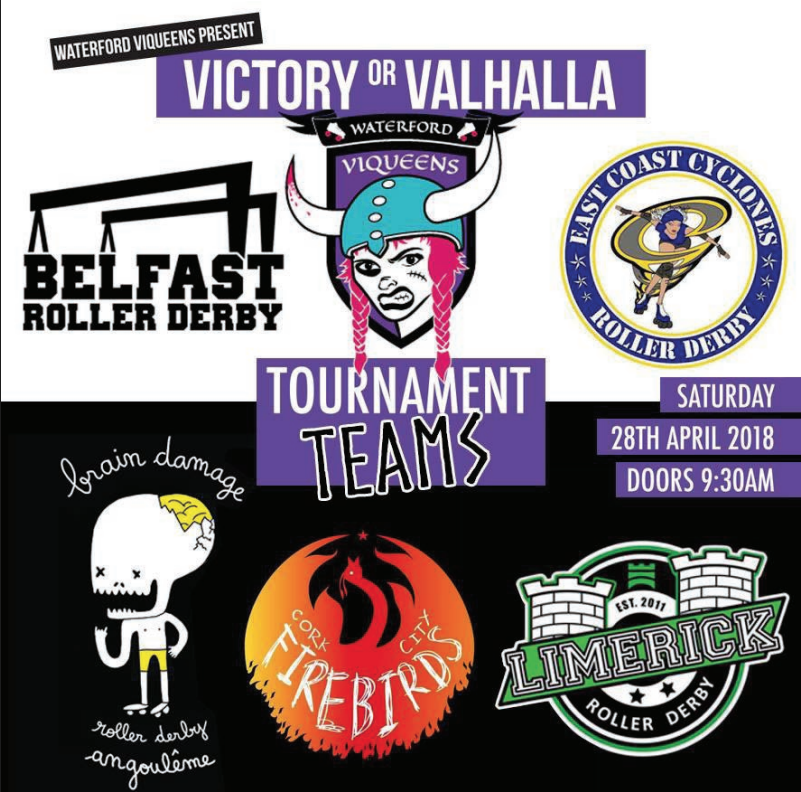 Waterford City Viqueens, Waterford's oldest Roller Derby league, wanted to promote Roller Derby in their city (and in Ireland) by hosting a 6 team tournament, with teams from across Eire and beyond. For a small league; in this case, just 25 members; hosting a 10 game tournament is challenging not just in terms of time, but also officiating resources. As Macks, for the Viqueens notes, "As Ireland is so small (in general, not just in derby land) securing officials was one of the toughest aspects of organising the tournament, we all know that without them...... THERE IS NO DERBY!"

This was also the Viqueens' first event on this scale, so they also had to work on solving all of the large tournament problems - food, water, changing rooms, scheduling and so on - for the first time.

To cope with these additional pressures, the league decided to make a more radical choice of ruleset: adopting the 2017 PivotStar Rules. To the best of our knowledge, Victory or Valhalla is the first tournament outside of North America where the PivotStar rules have been applied.

The "PivotStar Rules" originated at the 2017 edition of Best of the West, a Canadian tournament. Tournament sponsors and co-organisers, PivotStar, wanted to provide a more competitive format for large-scale contests, whilst also reducing the amount of overhead needed for officials. PivotStar owner, Luludemon, has explained the reasoning behind the design in more detail on her blog here: [LINK].

The reduction of effort provided by the latter two rules changes also allows a reduced number of referees and NSOs: PivotStar suggest having only only 4 referees total per game (two inside and two outside), plus a single "score tracking NSO" to indicate when either jammer has completed a pass, and reduced NSOs in other positions. In testing, Waterford Viqueens determined that they needed a few more officials to help things move smoothly, so their setup assigned two score tracking NSOs (one per team) and an additional NSO for the penalty box timers, for a total of just 11 officials for each game!

The tournament itself, Victory or Valhalla, was organised as 2 group stages (of three teams each, unseeded), into placement bouts - a single 5th place bout for the lowest teams in each group, and a 4 team single elimination for the top 2 in each group. This gave every team a minimum of 3 games, and a maximum of 4 (for the finalists).

An obvious effect of the 1 point per pass rule is that scores are a quarter to a fifth as high as equivalent scores from WFTDA rules games of the same duration, as you can see below (Limerick forfeited the final against Belfast, so a bonus game was played between 3rd place (on points) Angoulême and Belfast): 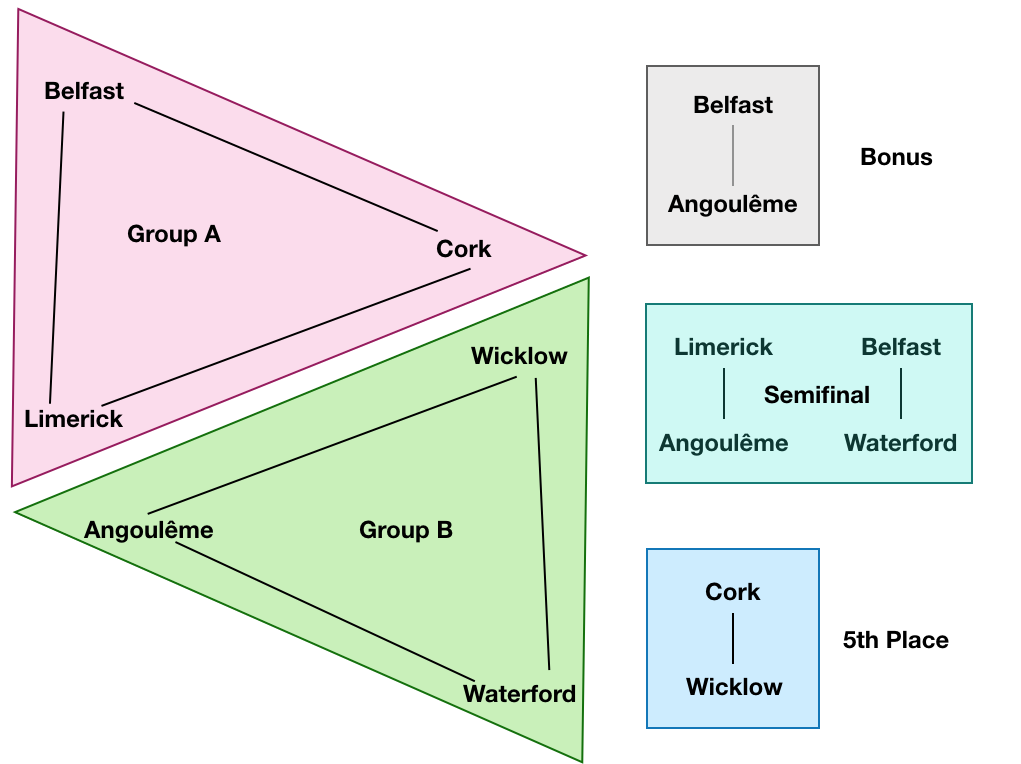 (Other than Belfast topping Limerick (due to Limerick forfeiting), this reproduces the FTS European rankings of the teams competing: these results are not in FTS as yet, as they're non-standard ruleset.)

Any tournament which runs on time and has no major issues is a successful tournament... but how did the attendees react to the new format for Victory or Valhalla?

Waterford City Viqueens performed a survey of attendees to measure just that, and have generously shared a summary of the results with us, on which we base this part of the article.

As with all surveys of a population, there are conflicting opinions, with some people praising aspects which others disliked (for example, the summary highlights responses complaining that 20 minute games were a little short, alongside several responses lauding the short games for allowing so many games to be packed into a single day tournament). On a purely qualitative measure, then, response to the PivotStar format might be considered mixed, as skaters mentioning it were either confused by the rules, or, conversely, found them simpler. (By contrast, officials only positively mentioned the rules being simpler + more predictable, with complaints more towards the reduction in the number of officials on track.)

On a more quantitative measure, though, the feeling is unambiguously positive. Given the chance to rate various aspects of the tournament on a 5 point scale, every single aspect received a mean and median rating between 5 and 4; and no aspect had any 0 ratings at all. Most promisingly, 100% of responding Skaters and Officials both found the tournament "worthwhile" and said that they would recommend it to others. The Viqueens pulled out a particularly positive quote from one (anonymous) respondent: "Seriously this was a fantastic event and should be a yearly thing. Like an Irish roller con: ye should be really proud of yourselves for pulling it off so well!" 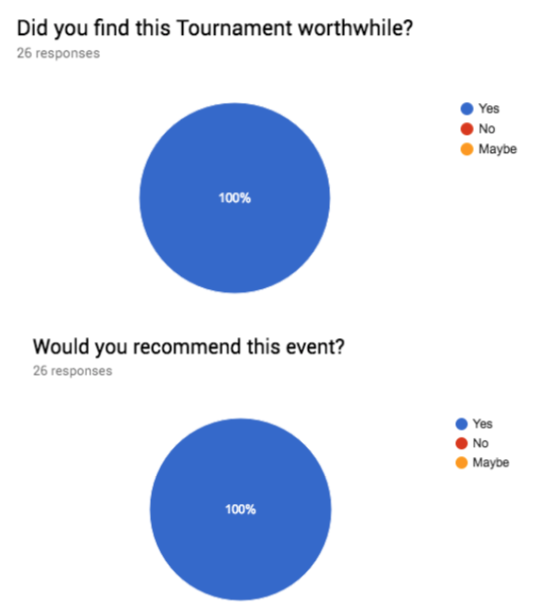 Survey data collated by Waterford Viqueens, made available to us on request.

An interesting aspect emerging from the more detailed questions was the not inconsiderable number of officials interested in the tournament primarily because of the different ruleset.  22% of officials (compared to 11% of skaters) chose this as their reason, when only allowed to pick a single response. (The majority of skaters prized the ability to compete in multiple games as their reason, 73% of skaters saying so; officials were more split, with no really clear majority out of "location", "multiple games" and "rule set".)

For the Viqueens' part, the event was an overall success, both in terms of organisation: "The schedule was reliable and well kept to; we went over time a little before lunch, but the break allowed us to catch up", and in terms of the social effect; "The amount of derby teams was great: people got to meet different teams and play teams they hadn't played before [which] created a great sense of community".

The league, of course, pay tribute to all those necessary for the event to exist, noting that "The announcers were fantastic, [and] the Refs and NSOs did a great job and helped everything run super smoothly".

In fact, media seems to have been the only thing that could be improved, with a Tournament Group Photo one of the things that the league would like to ensure happens next time. (We'd also recommend a group photo for the officials, the announcers, and the volunteers, as well!)

We'd love to see more tests of the PivotStar Rules elsewhere (with the permission of PivotStar, of course - although we know Luludemon is personally excited to see people using the ruleset in general, it's always nice to ask); and we look forward to more tournaments from Waterford Viqueens in future!