Here at SRD, we always like to see Roller Derby expanding into new places; especially places where there's been no roller derby before.

Whilst Roller Derby has been in Japan (in Okinawa and Tokyo, and, until this year, Misawa), there's been little growth outside of those regions. (Tokyo Roller Derby have expanded to contain teams based in the surrounding cities, such as Yokohama, but not outside the Kantō region; the most recent independent team, Kamikaze Badass, is also based in Tokyo.) So, it was particularly exciting to see the announcement this year of a new league, based in Kyōto, in the Kansai region!

We caught up with Kyoto Roller Derby's founders, Kat and Josie, to find out a bit more about them, and what inspired them to seed more roller derby in Japan. 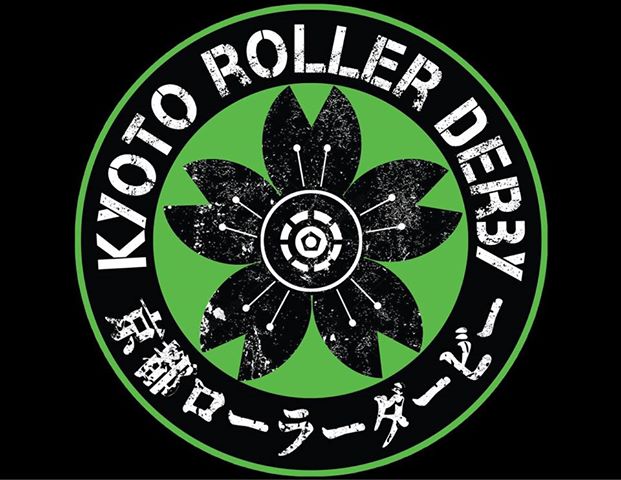 It's been a while since the last Roller Derby league was founded in Japan. Can you tell us a bit about yourselves as founders?

Kat: I skated with Bath Roller Derby Girls in the U.K. and I absolutely loved it! The team was in its early stages back then and it was so nice to be a part of something at the ground level. After moving to Japan and being really far away from any teams here, I kept writing messages of desperation on Facebook forums hoping to pique some interest. Eventually someone replied!

Josie: That would be me! I had been living in Japan for two years, teaching English and loving life up in the mountains, but every day I was still pining for the outlet that is derby. I messaged Kat having seen a plea of hers, and was thrilled to meet another skater out here. At the time we lived a few hours apart, so it wasn’t easy to meet up. But quickly we realised that a derby team was needed in the Kansai area. I began skating first at drop-in sessions with Bristol back in 2012, then for Severn Roller Torrent in Gloucester. I skated with SRT for two years, before moving to Japan in 2015.

The moment we met we couldn’t help reminiscing about all the things that derby meant to us. It’s such an important space and community that we felt could really bring a lot to Kyoto.

All but two Roller Derby leagues in Japan were founded by non-Japanese skaters; how are you reaching out to the people of Kyoto to grow the league?

Josie: We’ve been fortunate enough to work with and become friends with some amazing people out here, and we are really keen for all of our practices, future events and bouts to be a community thing. We are committed to using Japanese and English in all of our communications on social media and really strive to be as inclusive as possible.

Kat: This is definitely really important to both of us, and we want to encourage as many new Japanese members to join us as possible. I recently watched the animation Aggretsuko, and couldn’t ignore the parallels between that and derby as a form of stress release. The show is about an awesome red panda who works in a shtty office, full of shtty male bosses who talk down to her all day, and although she is sweet during working hours, at night she blasts out thrash metal karaoke to release her stress. I basically feel like derby could be this for so many of my friends!

Kamikaze Badass Roller Derby Tokyo found that one issue they've had is with the conflation of Roller Game and Roller Derby in the minds of potential recruits. In the short time you've been in existence, have you identified any specific issues to deal with?

Often staff at venues have a negative view of it and think it’s going to be too dangerous, because of the associations with Roller Game.  Also a lot of younger people see roller skating as very dated, and don’t consider it as a sport for the modern age. We’ve reached out to a lot of leagues for help and guidance on this type of thing, as we are aiming to be as transparent and respectful as possible, whilst also smashing any preconceptions, as respectfully as possible of course.

Getting a league off the ground also needs resources as well as people power. How can the Community help Kyoto Roller Derby - and how are you planning to grow your resources?

We’ve actually just announced our first fundraiser at our local Japanese-run burrito joint, where we’ll be selling baked goods and our first official merch [see here for this event]. Ideally we hope to hold a number of fundraisers throughout the year in order to spread the word and purchase essential kit for our fresh meat team. We’ve also been in touch with the wonderful Derby Without Borders [see our interview here] who provide second hand kits for up and coming leagues across the globe, and that was after a tip from you, and from another within the Tokyo derby community. Worldwide derby spirit is definitely already pushing us in the right direction and we are so grateful, so we hope that as many people as possible will want to help us get going.

Where do you see Kyoto Roller Derby in the future?

We want to see Kyoto Roller Derby as an active league in Japan, visiting teams around the country as well as worldwide! We want to have a really positive influence within the local community, with as many people as possible coming to watch our games, and feeling encouraged and empowered to get involved. Roller derby has had such an incredible impact on both of our lives and we can’t wait to watch it grow in Kyoto.

You can find out more about Kyoto Roller Derby, and support them, on their social media platforms:

You can also email them at: kyotorollerderby@gmail.com

And support them via GoFundMe here: www.gofundme.com/kyotorollerderby