The Brasileirão - Brazil's National Championships at 8!

Roller Derby in Brazil has been developing as long as it has in Mexico or Argentina, but the Brazilians were the first to develop a National Championship.

The first Roller Derby "Brasileirão", in fact, took place back in 2012; only a year after Team Brazil made its debut in the first ever World Cup appearance. Details of the first few years of the tournament are a little hard to find (part of the general problem with the volatility of content on the Internet), but since 2015 there's been a consistent social media presence for the event.

The 6th edition of the tournament, held last year in Curitiba, saw 7 teams compete, from across 6 cities and 5 states. As with Colombia, where the East is low population due to the Amazon Rainforest, the North of Brazil is similarly sparse, so most of the teams are fairly coastal. 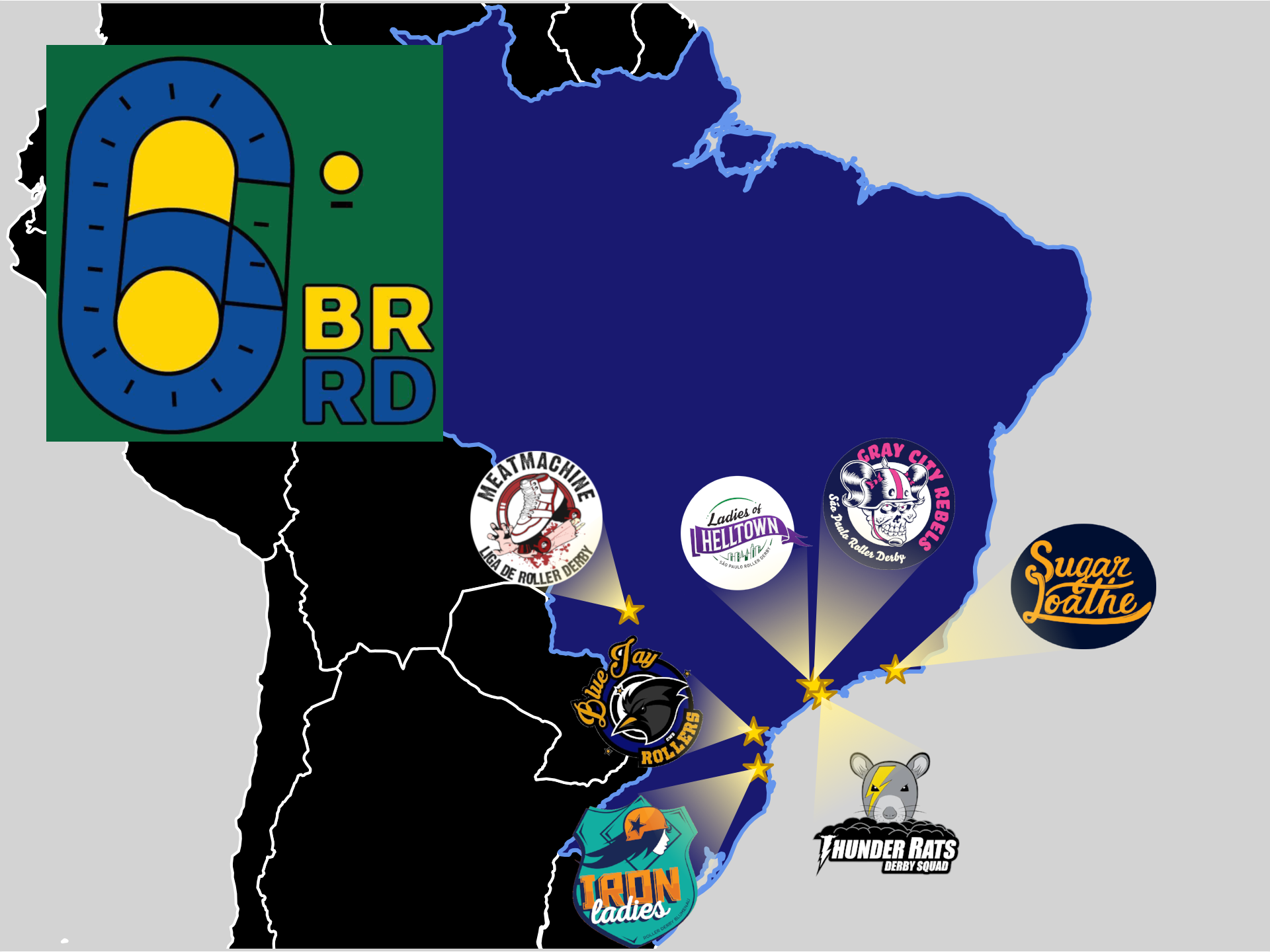 2017 hosts, Blue Jay Rollers, improved massively from their performance in the 5th Brasileirão (where they placed 6th) to take the 2nd place position overall, knocking the usually high-placed Ladies of Helltown down a peg in a surprising upset. In general Blue Jay Rollers have been having a good couple of years, but with the tournament host baton passed on this year, it will be interesting to see if they can maintain their position without home team advantage.

The obvious favourites for this year's Brasileirão, of course, are the 4-time winners, and current Champions, São Paulo's Gray City Rebels. Whilst their winning streak was broken in 2016 by Ladies of Helltown (in a close game, relegating the Rebels to 2nd), the Rebels regained the Championship in 2017 with a very convincing (226 : 107) win against the hosts. Strikingly, no team from outside São Paulo has won the Brasileirão since the very first in 2012, the dominance of Gray City and Helltown being pretty solid from their posted scores on FTS. (Although, given the sparsity of records on Flat Track Stats from Brazilian roller derby, this is hard to judge in detail.)

With 7th Brasileirão hosted by Ladies of Helltown in São Paulo, from the 2nd to the 4th of November, the advantage will be back with those strongest teams, and it would be a significant upset for a non-São Paulo team to take the Championship in 2018.

At this stage, the competing teams have not been announced - although it is anticipated that, in addition to the hosts, Gray City Rebels, Blue Jay Rollers and the Iron Ladies of Blumenau will be returning as regulars.  Camp Grande's Meat Machine, Piracicaba's Capivaras, and new league Avas Roller Derby (Rio de Janeiro) are also possible attendees, in addition to third São Paulo area team, the Thunder Rats, and original Rio team, Sugar Loathe.

This edition of the Brasileirão will also adopt a different format to previous events, adopting a 3 day structure, where two groups of (three?) teams play round-robin in the initial stages. The top teams in each group play for the 1st Place in the tournament (whilst the middle ranked teams play for 3rd, and the bottom teams from the groups play for 5th). Seeding for the groups will be done by boustrophedon alternation* across the estimated ranks for the competitors (selected purely because the WFTDA "S-curve" is this method), which is one of the two fairly good ways to seed groups like this - although the lack of strong Brazilian rankings (due partly to poor recording of game results) means that the seeds here are drawn from rankings at the previous year's Brasileirão.

This 7th edition of the Brasileirão will also host an Officiating Clinic, with WFTDA Level 2 Certified referee, Peter ParkHer attending from Germany; and Diego Rosan hosting the NSO component, and representing Oficiais RD Brasil, the organisation for Roller Derby officials in Brazil.

The 7th Brasileirão will be hosted in São Paulo, from the 2nd to the 4th of November 2018.

*that is, the groups are seeded with ranks 1,4,5 in one group and 2,3,6 in the other - you can imagine this as filling in a pair of columns, from left-to-right, then right-to-left, then left-to-right as you go down. The alternate, uniform, seeding, would put 1,3,5 in one group, and 2,4,6 in the other (this can be better if you suspect that strength differences aren't that uniform across your competitive field) - you go "left-to-right" across each row, and don't alternate directions.