Whilst it's not true for every country, the history of National Tournaments in Roller Derby is often tied up with legitimate organisation and representation within that nation. (For example: the French Championnat is, in a sense, what it is, because it is backed by the FFRS).

Whilst Spain has had a national tournament since 2016, this was run by the Spanish Skating Federation. That body, as with several around the world, does not well reflect the interests of Roller Derby, having a particular alignment with World Skate; this extended to them not providing any support to the Spanish national team at the last World Cup in 2018.

As such, attendance at the Campeonatos has been dropping steadily since they were initiated.

From last year, however, Roller Derby in Spain has legitimate representation. The Asociación de Roller Derby de España (ARDE - which also nicely means implies "fire" and "passion") represents the WFTDA-rules and WFTDA-aligned teams in Spain (of all gender and age policies).

This year, then, there is finally a more representative Spanish National tournament, backed by ARDE. With ARDE's greater inclusion, there's enough teams to require two divisions for the WFTDA-gender tier; a single division Men's tier will also provide a MRDA-gender champion.

Leagues are allowed to submit multiple teams (A and B teams, for example), with the restriction that only one team is allowed per division, and no skaters can be shared between team rosters. Given that only the WFTDA-gender tier has two divisions, this effectively means that we can expect only WFTDA teams to have more than one entry.

Flat Track Stats' Global rating is used to seed these divisions for 2019. 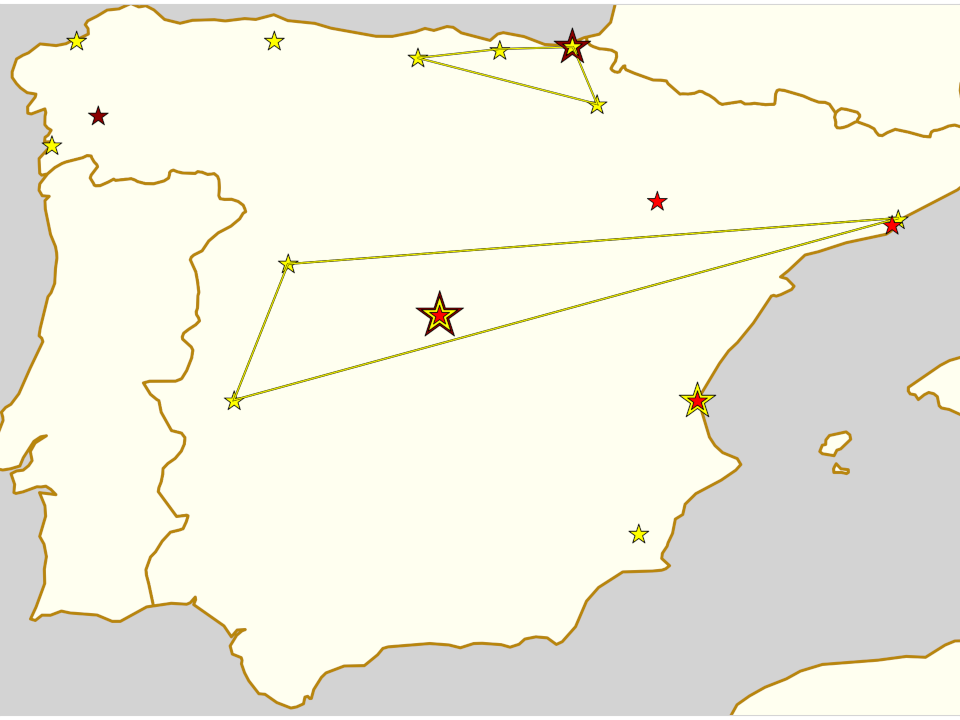 Map of teams in the ARDE championships, coloured by division/gender-policy. (Red = Division 1 WFTDA, Yellow = Division 2 WFTDA, Dark Red = Division 1 MRDA). Hybrid teams are indicated by linking of the stars for their constituent teams.

The Division 1 teams competing are pretty much the ones you would expect. The top rated teams in FTS Europe from Spain, they consist of:

Division 1 will run as a full round-robin tournament, with those 10 games deciding the candidates for the Championship game to be held on the 7th of July in Madrid.

Division 2 is a little more complex. As with some of the teams in other National tournaments (for example, France's Championnat), we have a few "hybrid" teams competing, pooling the resources of several leagues into a single roster. The list is rounded out by two B teams from Division 1 competitors: Roller Derby Madrid and Valencia's Rayo Dockers competing in both divisions.

With 8 teams, a full round-robin tournament, as used in Division 1, would require 28 games. Without multiple tracks, this won't fit in the two days of the Division 2 fixture. We expect to hear more about the Division 2 competitive structure in due course.

In a way, the most interesting parts of this Division are the hybrid teams: merging skaters across leagues can be difficult, especially getting them to gel into one force; in particular, we're watching Frankensteam to see how the distance between their western and eastern halves affects coordination.

We'd assume that this will be a full round robin, as only three games will be needed to establish a champion. With MadRiders the most travelled of the teams, and the highest rated, we'd put them odds-on for the championship.