Entirely reasonably, Australian Roller Derby has tended to organise on the State level, more so than the National level. Almost every State has at least one State-level tournament (5x5 Roller Derby, Statewide Stampede, Boom State Clash!, and this year's Tasmanian Tournament etc), but a formal National tournament has been longer in development, on the WFTDA side of things. (The biannual Great Southern Slam, which remains the largest regular Roller Derby Tournament in existence, sort-of stood in for a National event, but we don't think it ever intended to.) 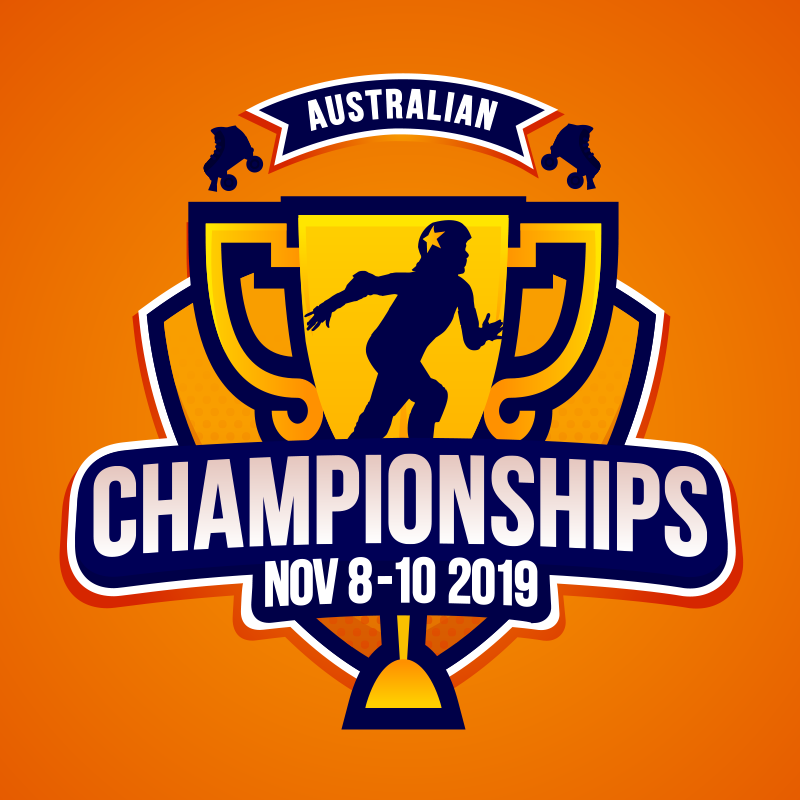 As such, Australia's unusual in that there's been an Australian Men's Roller Derby Championships since 2014; but no Australian National Tournament for WFTDA-policy teams until last year! Even then, the Australians do things differently: the new Australian National Roller Derby Championships is organised on a State level itself; with teams representing Victoria, Queensland, New South Wales, the Australian Capital Territory, and a team representing the First Nations (the indigenous peoples of Australia). In this sense, it resembles, perhaps, the USA-based "State Wars" more than most other National tournaments. (In addition, the Australian Nationals has both adult, and Juniors tiers, with state-level teams in both.) It's notable, and still disappointing to us, that the Northern Territory, South Australia, and Western Australia are still not represented in the "National" tournament (Perth Men's compete in the Australian Men's, and South Australia in the Juniors!), but we hope that with proper support, this can happen in time.

(By contrast, the Australian Men's is a more familiar design, with city-based teams competing for the Cup.)

In their first year of operation, the "Australian Nationals" was entirely separate from the "Australian Men's", but this year, the two events have co-located whilst maintaining separate branding and organisation. The venue supports two tracks, although the running order shows that only track 1 will be streamed. As Track 1 seems to mostly be hosting the AMRD games, this is unfortunate for anyone interested in the JRDA and WFTDA-gender State tournaments; only the first game in the WFTDA-gender event will be streamed, along with the finals of each. (The schedule does appropriately offset the games on each track, so that one is "playing" whilst the other is in half-time or end of game break).

There are other changes from last year: in the Men's, New Zealand Men's Roller Derby is competing for the first time (making this... not really a National tournament any more...) EDIT: we've been informed that NZMRD did participate in the first Australian Men's in 2014, and could potentially upset things as they play #1 seed, Victoria's Vanguard in their first game. We are confident that the Vanguard will win, but a National level team always has the potential to cause spoilers. 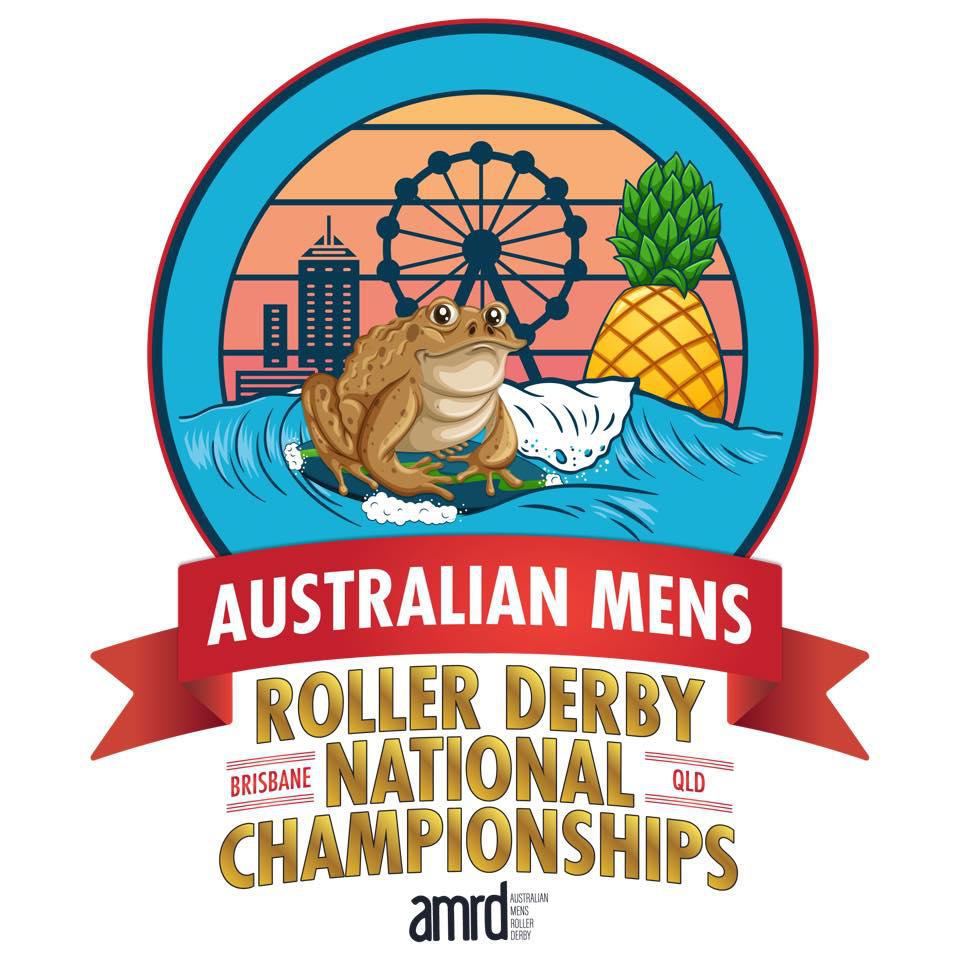 In the Nationals, the ACT team is new this year; with only two leagues in the ACT area (a bit like the USA's Washington DC, the ACT is essentially a tiny area surrounding the national capital, Canberra), it's pretty easy to guess who their skaters might be. (Even with their team's decision to go fully into a Duck theme, with every skater skating under the name of an anatine pun, their numbers remain the same.)

(We'd like to thank Team Victoria for being the only State team to label the league each skater comes from on their roster; this makes it much easier to see how diverse their intake was! Team VIC has skaters from 7 different leagues, and whilst VRDL are definitely represented, they're by far not the majority contributor.)

As a co-hosted event, all three National Tournaments share a THR, the very experienced Denominator, and a THNSO, Mama Panda.

Looking ahead to the tournament predictions: for the Men's side, it would be unwise to rule out another tournament victory for Victorian Men's Roller Derby. Since the AMRDC started, they've only lost once; in 2017 when Tasmania took a shock victory and broke their three-year streak. With a conventional single-elimination format (and two consolation games), the tournament design will tend to reinforce its own seeding, making it very likely that the Vanguard will win. The most likely team to upset them, based on current Flat Track Stats ratings, is the host league, Brisbane's Scartel. With only a smattering of rating points between the two teams, home team advantage could easily be enough to allow the hosts victory. 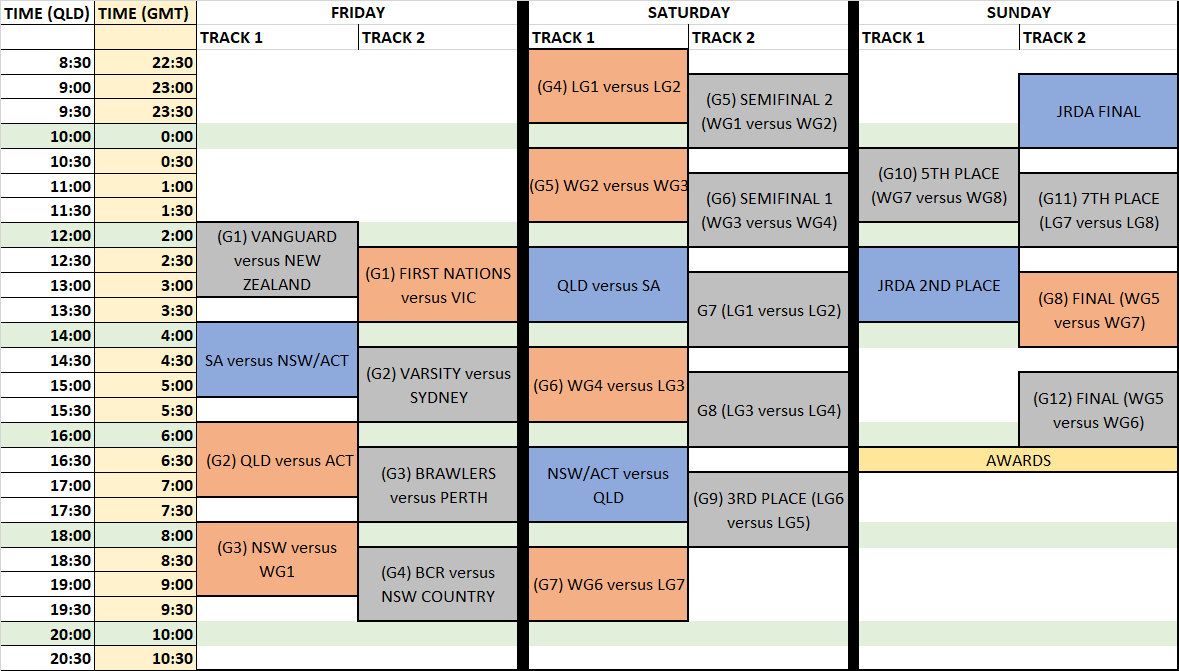 The WFTDA-gender and Juniors tiers are much harder to predict: State-level teams which exist for only a single event have very little history to base predictions on (and even a roster only gets you so far). In 2018, (WFTDA-gender) Team Queensland won, with a strong (222:125) victory over Team Victoria in the final, whilst for the Juniors, Team NSW/ACT took an equally striking victory over Team South Australia.

The WFTDA-gender tournament is structured as a double-elimination tournament; as such, we're not as concerned for the First Nations team, who are drawn against Victoria for their first game, as they will have a chance to progress in the lower bracket. (Interestingly, this is the same draw (switching FN&A for TI:D) that was determined in 2018, although with an additional team in the mix, the brackets are otherwise different.)

The Junior tournament, with only three teams - South Australia, Queensland and "New South Wales + ACT" - has an interesting structure which seems designed to give them as many games as possible. A three game round robin (which would ordinarily supply an unambiguous champion in itself) selects into a "Grand Final" for the top 2 teams; but even then, the loser in the Final plays the remaining team in a "2nd Place playoff". This structure returns from the previous year, but we still remain unsure as to why the competition isn't simply running a double round robin (which would give all the teams an equal number of games, for the addition of just a single scheduled bout).