Despite being a bit busy, we're trying a new thing this week to give us more space, and are grouping all "National tournament" fixtures on a date for a given country into one entry - so here, Dijon and Saint-Gratien share a Championnat de France spot. With this being the week of Halloween, there's a lot of "spooky" events earlier in the week and on the weekend, but there's some very exciting other developments, including the first internal interleague bout in Uruguay, Liverpool Roller Birds' 10th anniversary, and the Rebellion tournament returning to Melbourne for another year! 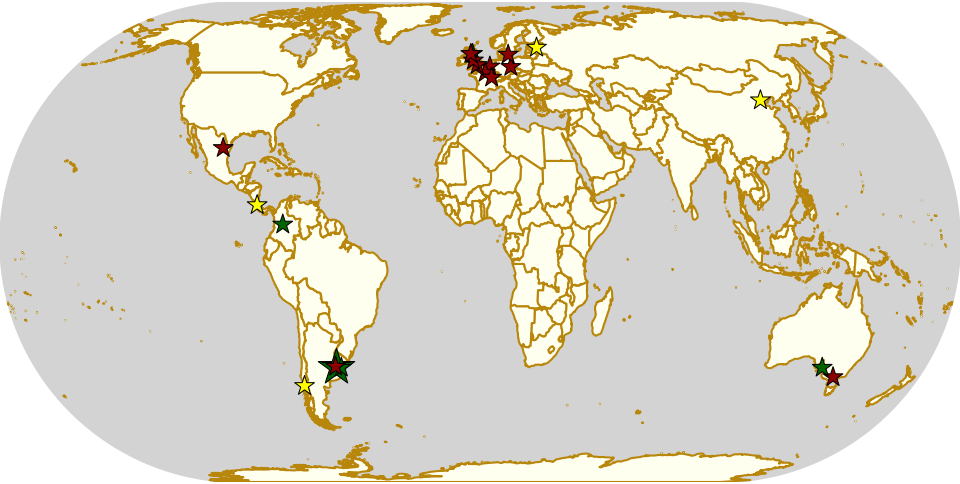 The Northside Rollers host the 2019 edition of their international tournament, Rebellion 2019. This 8 team tournament runs over the weekend as two groups of 4 playing round robin, with the group winners playing for the Grand Final; for a total of 13 games (and 3 games per team).

This event may be livestreamed (not confirmed at time we published).

Light City Derby are having a Halloween Sur5al tournament for their Sunday afternoon!

Tartu Roller Derby host a "Skeleton Skate Night" which we think is best interpreted as a Halloween-themed roller disco, because the alternative is terrifying.

Crime City Rollers are taking the whole weekend for some derby, as they invite all of Helsinki Roller Derby over for some games.

Antwerp Roller Derby host their third edition of the international Roller Derby tournament, the Brabo Cup! This year, the contenders are from Antwerp, Breda, Lomme, and Liége. They'll face off in a 6 game round robin across the weekend!

Roller Derby Panthers and The Velvet Owls each host a Championnat de France Nationale 2 fixture, for Zones 3 and 5 respectively. (The Championnat 2019/20 season started last weekend with some of the Nationale 1 fixtures, but there was too much on to cover it.)

POSTPONED TO NEXT WEEK TO AVOID CONFLICTS WITH MEAN CITY

New Town Roller Derby host an open C-level WFTDA-gender policy scrimmage opportunity, as they get in extra practice ahead of their scheduled bout against Lucerne later in the year. Signed up skaters will play NTRD as a "the world" team.

Oxford Roller Derby host an international triple header, which we're partly including just because it has a Bollocks to Brexit theme; Vienna and Paris are visiting to show how much Oxford cares about our friends in Mainland Europe, on what would have been Brexit day.

Liverpool Roller Birds are celebrating their 10th anniversary with a double header against their initials neighbours, London Rockin' Rollers.

Mean City Roller Derby host their traditional Halloween double-header, this time with an Open To All game to open.

Cesope Roller Derby host the first ever game between two Uruguayan leagues, as they host Tempestad Roller Derby for a scrimmage/friendly game. This is a history making moment, and we're excited by the possibility of a three league event in the future, too.

Rebel West Roller Derby are celebrating their birthday with a double header!

2x4 Roller Derby host Pack is Queer, a double-header of mixed-team derby, as part of the Buenos Aires Pride weekend.

Vanguardia Roller Derby and Combativas Revoltosas co-host a rather vaguely advertised event, DerbyWeen, which looks like a Roller Derby Sevens tournament, or similar, for Halloween! This is an Open To All genders event (although there is a limit on the number of male skaters per team).

THIS EVENT CANCELLED AFTER WE WENT TO PRESS, DUE TO SAFETY CONCERNS OVER THE CHILEAN GOVERNMENT'S ACTIONS AGAINST ITS POPULACE

The Deskarriadas host their 4th Skating Family (Patinetada Familiar Osorno) event, where they will be skating a 3 km course (but the community on wheels, big or small are all invited to take part).

We believe that this event is still taking place, despite the recent protests, and oppressive response from the Chilean government; signs are that the Government has stood down from their response, so far, this week.

Monterrey Roller Derby host a single header against Tampico's Jaibronas, ahead of the AMRD Nationals later in the month.