An Interview With Violent Bob 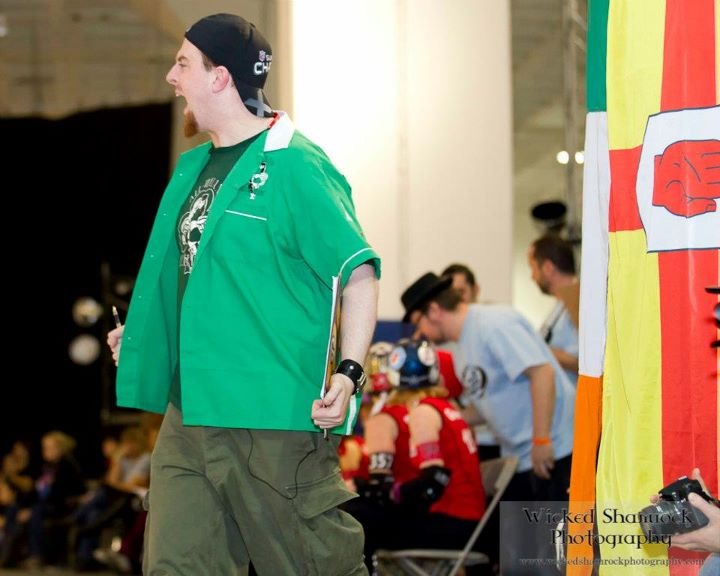 In the first of a series of post World Cup interviews,we talk to Violent Bob,Head Coach of All Ireland Roller Derby.

You have managed a national team and represented your country at a world class event,can you put into words how that feels?

It feels amazing. Thinking back to only a mere 2 years ago when Dublin Roller Girls held their first meeting, and I myself pulled on a pair of skates for the first time and started this journey, never in my wildest dreams did I think that I'd be coaching the first national team at the first ever World Cup. It's been a long year that involved a lot of hard work from a lot of people, and it was a tough week while we were over there, but it was an experience like no other and I'm proud to have been a part of it.

What were your impressions of the World Cup?

I know there has been some backlash from supporters, podcasts etc, regarding the live stream, the venue, the pillars which blocked people's' view etc, but I can genuinely say that the atmosphere at the event was incredible. I think there has been a definite divide between those who were there and those who watched online. The closeness of the crowd to the track, the packed bleachers, flags, the banners, the sheer noise and volume... I've never known anything like it. The support was brilliant, (I think Team Ireland converted a lot of the neutral fans which was nice), and the camaraderie in the locker room between all of the teams was fantastic as well. It felt like a mini-community in the venue, between teams, staff, supporters, I really can't speak highly enough about the whole thing.

I also think that everyone was big enough to realise that it was the first time something of this magnitude had taken place. There were some issues with the buses to get everyone to and from the venue etc, simple logistical things like that, but honestly I think everyone just rolled with the punches. It can only improve, I think everyone will be able to learn from this event and it will help it run more smoothly next time.

What are your World Cup highlights?

There are a few things that really stood out to me over the weekend. From a Team Ireland point of view, finishing in the Top Ten was THE highlight. We'd gone over with that as our goal, and we were delighted to have achieved it.

Otherwise, a few more specific things, the performance against Team England was huge for us. Granted, the scoreline got away from us a little in the end when England won out by a score of 199 to 64, but to have rattled them the way we did with only a 20 point difference going in at halftime, and to have pushed them all the way and make them work for every point that they scored, this was really like a Team Ireland "Coming Out" party! We showed the world that day that we were here to play, no matter who the opponent. I think I speak for everyone on the team when I say that we felt like we won that bout!

The bout against Team Finland was another highlight, the closest game of the whole tournament, and what so many people came to tell me was the high point of their weekend.

On a personal note as well, I also enjoyed how the crowd got behind us. I'd jokingly dubbed us the "Green Machine" before the tournament until someone could come up with a better nickname, but it seemed to stick, and to hear huge sections of the crowd chanting that back at us gave me goosebumps. Definitely something I'll never forget!

Ireland drew quite a mixed group with England and Argentina as opponents,obviously England were always going to be a hard team to play,but Argentina were one of the competitions unknowns,how do you prepare tactics for teams that so little is known about?

This admittedly was a tricky task. There was talk about the Argentina team being the unknown entity in the tournament, but I was adamant all along that we would go into every bout with the same approach. We knew that we had quality in our team, but that people would underestimate us due to our lack of experience - I stressed to the team before every bout that we needed to respect our opponent no matter who they were.

Like many teams in the competition,Ireland's squad was made up of skaters of different levels of experience and some of your skaters had only bouted a handful of times,what difficulties did that raise?

We made sure to get experience together as a team prior to travelling for the tournament. By bouting three times in the UK before we went over, it meant that regardless of people's' experience in terms of bouts with their home leagues, we had plenty of time on the track together and this helped enormously when we went into our games in Canada.

The only other concern was the 3 skaters we had practice and meet with the team for the first time when we arrived, Wile E Peyote, Canadian Psycho and Pippi Strongsocking. However after our practice session together it was clear that these skaters were fitting in beautifully, so it worked out perfectly!

Ireland's bout with Finland was one of the most exciting of the whole competition to watch,how was the bout for you?

Stressful! Looking back on it now, it was a hell of a bout, so back and forth, and had we had maybe one more jam, who's to say the result might not have been different?! I've never been one to get hung up on the "what ifs?" though. All credit to Team Finland, they're an amazing team with an amazing coach, we'd both wanted the chance to play one another during the tournament and I'm glad it turned out to be such a great bout.

For me, that one was where I feel like I could have done more. Feel like I spent a lot of time yelling at the officials rather than focusing the team, and I think I got something of a reputation among the officiating crew after that bout!

But it was awesome. I love that Team Finland went on to finish 5th in the world, they deserved it, but we'll definitely be hitting them up for a rematch!

Part of Derby is learning from all your opponents,whatever their skill level,what lessons have you learned from the teams you faced during the competition?

We learned something from every team we played, without a question.

The heart of Team Argentina and Team Brazil, both of whom played every game with a smile on their face and took on all comers. The improvement shown over the course of the weekend was nothing short of breathtaking, and if they can do what they did in the space of 3 days, they'll definitely be ones to watch in a few years!

Team England taught me that no matter how much a game might go differently to how you expect it to, by sticking to what you do well and keeping your head, you can effectively shut down an opponent and finish the game ruthlessly.

Team Finland, I can't say enough about. They taught not only me, but the whole world, that experience might stand to a lot of people, but clean, disciplined play, staying out of the box, and working together as a shiny silver machine will win out.

And Team Germany, with no disrespect to anyone else we played over the weekend, were simply the strongest team we played. I think skater for skater our two teams matched up very well, but on the track... those walls were impenetrable! They played a super effective team game and fully deserved to win the 9th/10th place game. Another rematch we'll definitely be looking for though!

What has the press and public reaction been like in Ireland,since the team returned from Canada?

It's been excellent, I must say. The cynic in me would say that it's a pity that despite our best efforts before we went over, no-one wanted to know, but since coming home, I've had both RTE and The Irish Times contact us for interviews and coverage, which can only benefit the sport.

This also seems an opportune moment to say a massive thank you to the online support we got from people all over the world, but especially those in Ireland. One of my favourite parts of every day was getting back to the hotel and checking in to Facebook to read the outpouring of well wishes and support. You're all awesome, thank you!

What do you think the interest in Roller Derby generated by the World Cup will do for the sport in Ireland?

Like I said, I hope it will just raise the profile. With more media coverage, we might attract more sponsors, attract more freshmeat, attract bigger crowds... The possibilities are endless! Also, I truly believe it will raise the bar for the existing leagues. Like I said to the skaters when I got home, 2 years ago the Dublin Roller Girls, and Roller Derby itself, barely existed in Ireland, and we go on to finish tenth in the world. There's talk of another tournament 2 years from now, and so I expect Ireland to be even stronger next time around.

With the first Roller Derby World Cup a success,there have been fresh suggestions of a European Cup,what do think of that idea?