The Lothians Get Rolling!

After the foundation of Fierce Valley Roller Girls, and Nasty Nessies Roller Girls last year, many thought that that would be about it for new roller derby leagues in Scotland.

No sooner had we issued that opinion, however, then two more showed up! Lothian Derby-Dolls, declaring themselves as a "Mid-Lothian" based league, founded by a group of experienced skaters late of Auld Reekie; and New Town Roller Girls, based in West Lothian's Livingston.

Both teams are aware of the recruitment pressure exerted on them; by Edinburgh's Auld Reekie to the North-East, and Fierce Valley to the North-West, but they feel there's enough demand for derby that they can prosper in addition. Indeed, New Town recruit Gill Brannan explained: "the first team I found was Auld Reekie, but the fresh meat seemed infrequent, and New Town is local to me. I was really surprised and happy there was a team here." (Gill has since had to leave New Town for personal reasons). New Town's initial founders, Hazel "Hazzard" Mochan, Jennifer "JPow" Powell* and Becki "Darko" Lawrie, decided to start the new league in a burst of enthusiasm after having watched Whip It! on DVD. Unaware of the existence of Fierce Valley Roller Girls to the north, and seeing the long wait for the next fresh meat at Auld Reekie, it seemed like the fastest way to get skating would be to do it themselves. 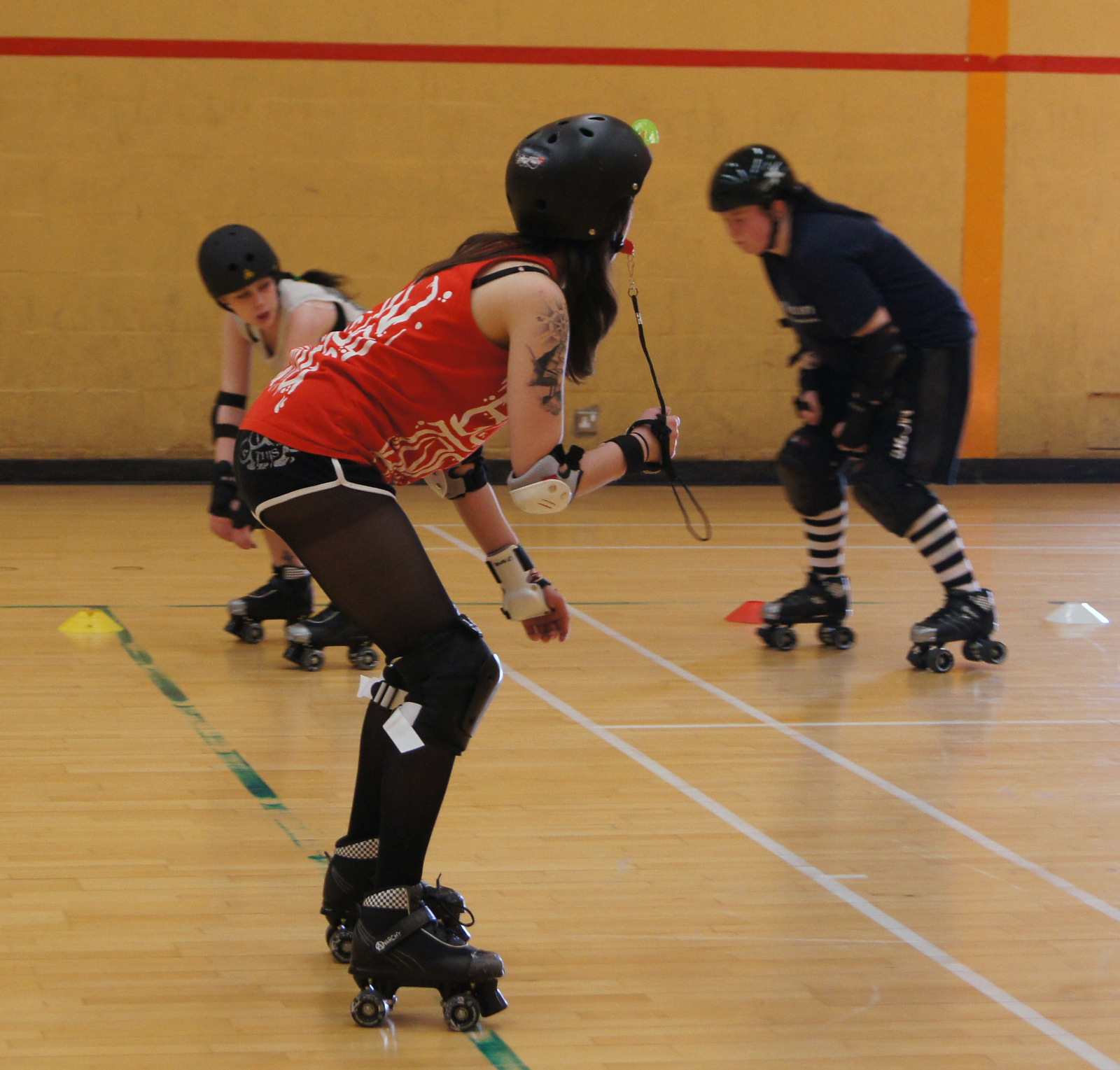 The going has been slow but steady for New Town in the months since; after growing quietly on a Facebook group page for several months, they exploded into the awareness of the Scottish Roller Derby community after Lead Jammer magazine gave them a plug, but gaining awareness outside of the existing derby community has proved difficult. A concerted leafleting campaign is planned in the near future, as most of the team's previous outreach has been via Facebook and Twitter. Skaters from both Auld Reekie and Fierce Valley have helped with the occasional practise session, as New Town have no experienced coaches amongst them. Initially, the team benefited from sharing practise sessions with Lothian Derby-Dolls, but with LDD growing bigger this has become less possible. Team founder Hazzard has been developing her own coaching skills as a consequence. New Town's practices are weekly on Sundays, 3 to 6pm at Craigswood Sport Centre, Livingston.

While New Town's band of skaters are all new to Derby, Lothian Derby-Dolls have well-experienced founding skaters Psychobeing and Skate-tastrophy, formerly of Auld Reekie. In addition, they've recruited the legendary Cain Unstable as their coach. Cain was involved in the early days of both Glasgow Roller Girls and coached Auld Reekie for their first couple of years, bringing them up to an extremely high standard. The lure of Cain, and the presence of experience skaters hasn't hurt LDD's recruitment; one skater I spoke to had even been recommended to join the league by Dundee's Psychomilly! 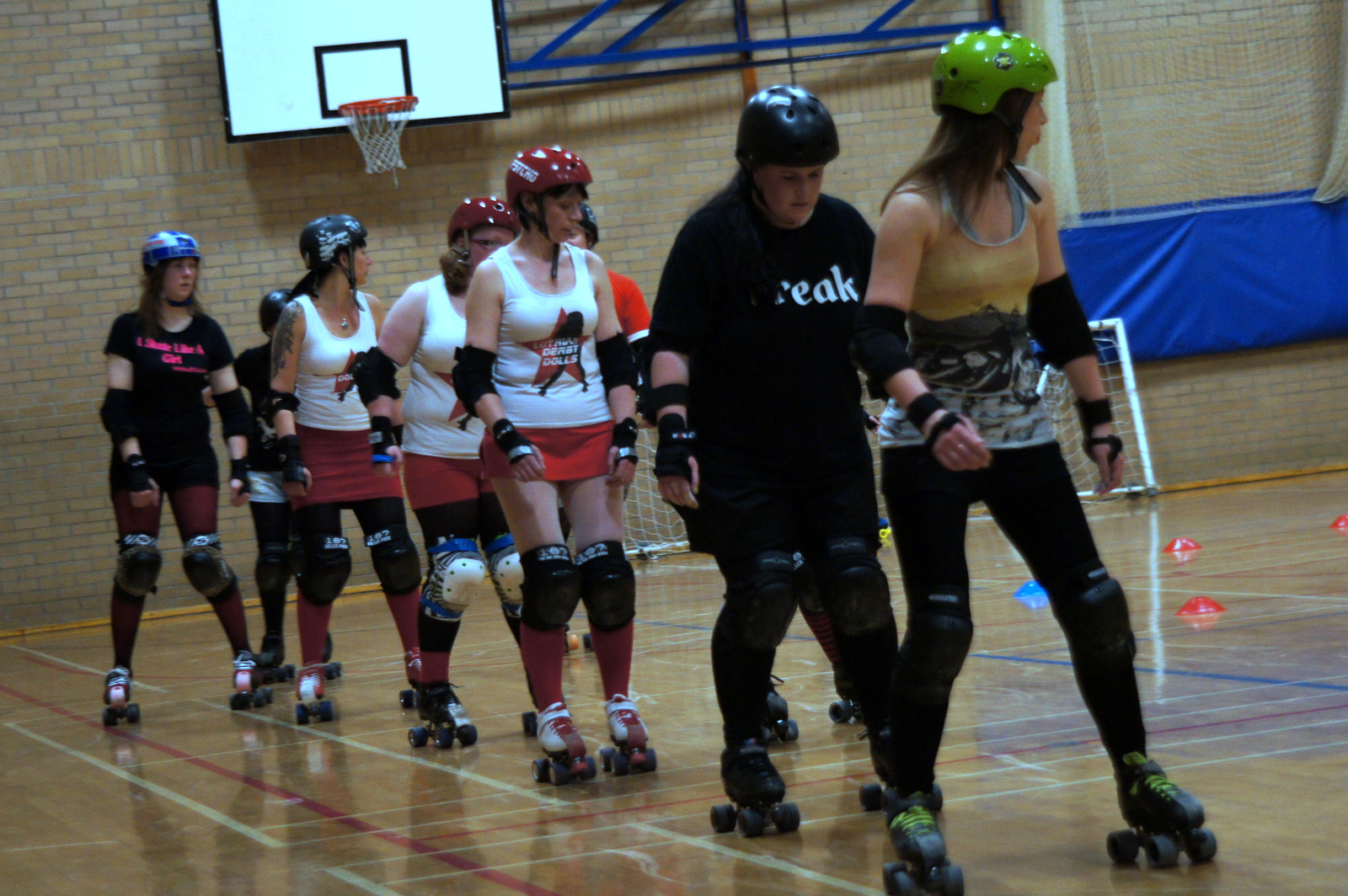 Engaging in an impressive structured training plan, Cain hopes to get the first recruits for the Derby-Dolls mins passed and bout ready before the end of the year. With already more than enough members to form a full bouting team, it looks like they might even manage a bout next January. The Derby-Dolls started with a single practice on Fridays, 7-9pm at Danderhall Community Centre, sharing a Sunday practise with New Town. Since then, Lothian Derby-Dolls have been looking for a new venue for their own Sunday practise, and are no longer sharing with New Town.

The growth spurt for Scottish Roller Derby has not stopped even here. During the process of writing this article, a second Glasgow-based team has just emerged, Glasgow Slayers positioning themselves somewhat in the same relation to GRD as the Derby-Dolls are to Auld Reekie. Unlike LDD, Glasgow Slayers don't come with any direct derby experience; while co-founder Teri Fiher has skated on inlines for years, she's new to quads, let alone hitting people while wearing them, and her comrade-in-derby Lou Natic has no previous skating experience at all. Recruitment is in the initial stages, but seems to be very positive, and Glasgow Roller Derby are being very supportive themselves. As yet, the Slayers have not located a suitable practise venue.

More speculatively, even Shetland is potentially getting into the act, with a Facebook page only recently renamed from "Anyone interested in Roller Derby in Shetland?" to "Shetland Roller Derby". Despite the remoteness of Shetland, they have already hosted an initial recruitment meeting, and are positive that they can recruit enough members to form a team. This would make them the new holders of the "Most Northerly Team in UK Roller Derby" record, previously held by Nasty Nessies in Inverness (in Europe proper, Scandinavia hosts several new leagues which are much further north than the rest of Europe could ever match, of course).

[*JPow has since left New Town in favour of a skating role with Lothian Derby-Dolls; the current chairs of New Town are the remaining two founders, Hazzard and Darko.]