Co-ed derby...it's not just for the girls 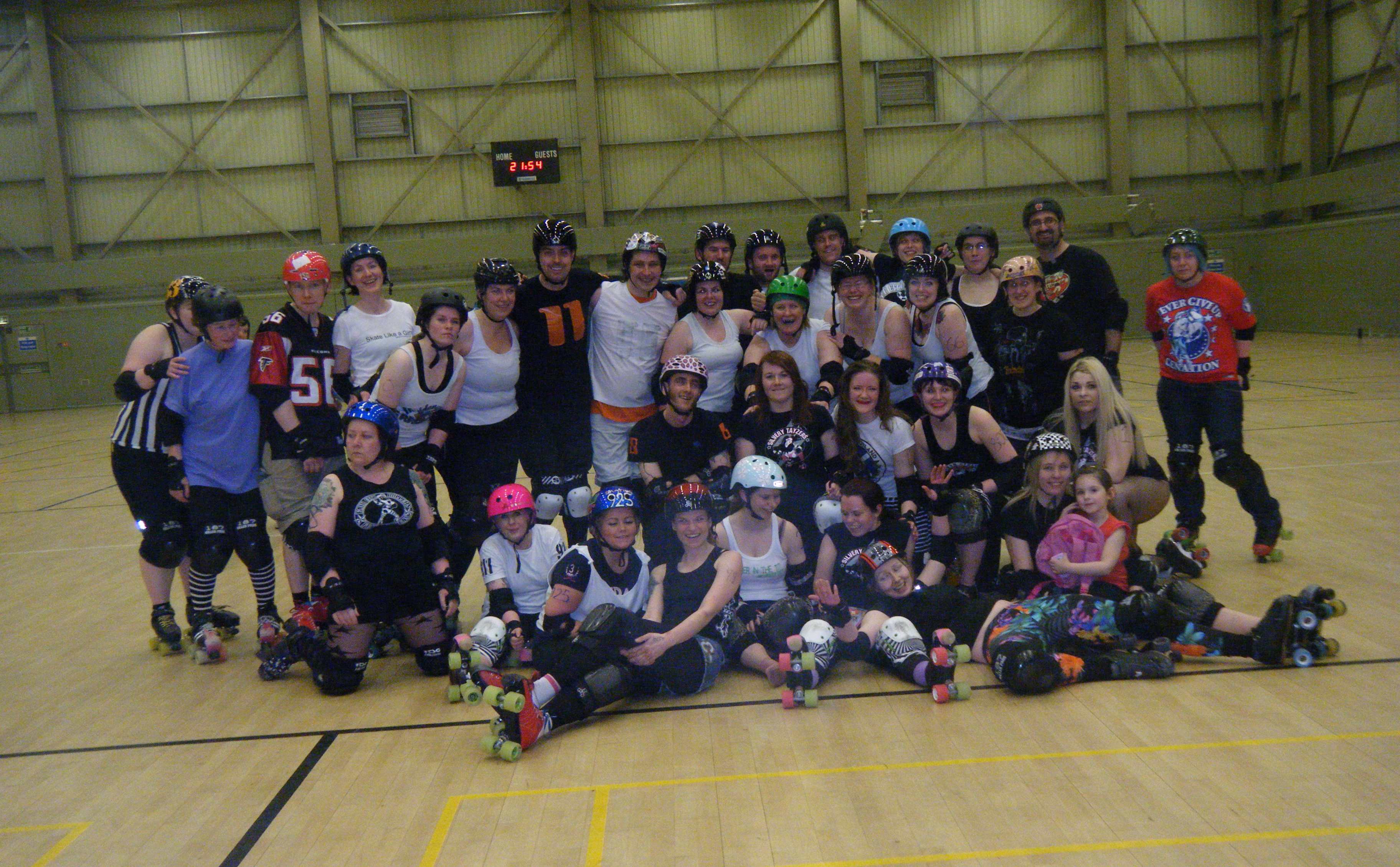 The creation of the Jakey Bites, Scotland's first men's roller derby team, has created an interesting aspect of roller derby, bringing the boys off the sidelines and onto the track.

I was lucky enough to attend the first Dundee Roller Girls scrim session that included members of the Jakey Bites, who were preparing for their first bout.

Beforehand, some of the girls I had spoken to were a bit apprehensive about it; others were really up for it. Some thought that the boys would cause more damage on track, others thought it would be great fun. And besides, the boys weren't as experienced as a lot of the girls.

Everyone who was there seemed to have a great time, and as a spectator, it was interesting to see the difference between guys and girls on track, what the physical differences between men and women brought to, and took away from, the performances.

An interesting observance made to me by a Jakey not that long ago emphasises this point. He told me that men don't do as much hip checking as women. The fact is, that men don't have "hips" per se, their waists are narrow while their shoulders are wide, so they will go for a shoulder/side hit. But this may be where co-ed derby can help shape merby strategy: men skating with women can see how moves like hip checks can be effective and start incorporating that into training sessions. And with most male skaters not using hip checks, it could become an interesting tactic that can give a men's team an edge.

I asked for the thoughts of some fellow skaters (male and female) and although it was mostly positive, there were some concerns.

Fierce Valley's Frocky Horror said: " Being a Jakey wife I have seen first hand the damage that boys can do to each other, so I wouldn't be happy bouting or scrimming with boys. Having said that at FVRG we trained with our refs and learned to hit with them too. We don't do that now, just right at the start."

During my time at the Fair City Rollers, this was our situation too. Danimal, our league's guy ref, often trained with us, to the point where no one really batted an eyelid when we saw him lacing up his skates.

Dundee Roller Girl Gadget said: "I understand the reservations that some female skaters have about skating with boys. I have done it at DRG before and found it be just as much fun as skating with girls. As it stands now, games are more about tactics than just going out and hitting each other. There is much less hitting than there was when I first started. Legal target zones are always an issue, regardless of sex. If you take Psychomilly for example, she's our tallest skater and struggles with legal target zones, yet is an amazing blocker and hits harder than anyone I know. I think both sides have much to gain from playing co-ed."

Nasty Nessie Cherry Bow added: "I feel that women have reached a point now where we can comfortably compete and play alongside with our male counterparts on the track. Women can hit hard and are fast just as there are women who are slower and more tactical. We come in all shapes and sizes and so do the men! There are female skaters out there who weigh more than a male skater (myself included) who can take a hit and stay put regardless if that hit is from a man or a woman. Equally we can give as well as receive and I know there's a few men out there who have been sent flying by a well placed hit from a female skater. Additionally I think this will bring more men into the sport and we need all the fresh blood we can get to make sure this fantastic sport keeps going and evolving."

She even added that she felt there should be co-ed bouts, which would allow for a "new dimension of play".

However, a lot of the men don't take for granted that their presence at scrims will be welcomed.

Former Jakey Bite and long-time GCRG ref Buffy Boiler explained: "In my opinion co-ed is fine on the proviso that everyone, boys and girls, knows what they're getting into and that there is absolutely no stigma attached to people saying they're not comfortable with doing it. I would never expect to just rock up to a girls league scrim session and be welcomed to play - it would have to be something agreed in advance."

Whether or not there will be co-ed derby bouts remains to be seen, but one thing is for sure...men will be welcomed by many at scrims in the future.