Continuing the blog's series of reviews of the year from Scotland's many Roller Derby leagues, we asked Glasgow Roller Derby's officially voted Best Veteran Blocker, and Irn Bruisers co-captain, Chemikill Hazard, about their past 12 months, and their plans for the future. 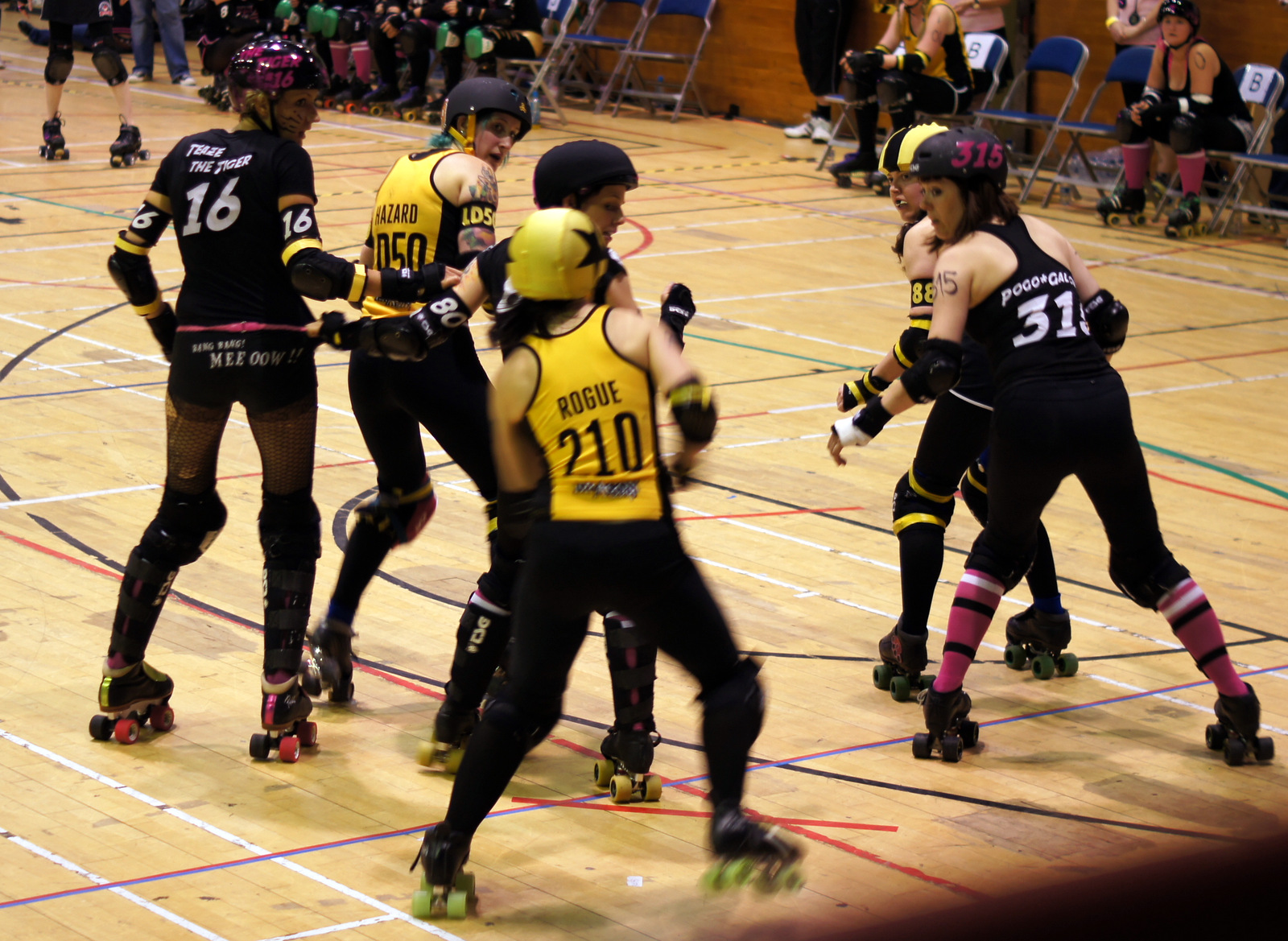 Chemikill Hazard (and others) looking out for Rogue Runner during Chaos on The Clyde.

It's been a busy year for Glasgow Roller Derby, starting with Tattoo Freeze, and incorporating the rebrand from Glasgow Roller Girls, a lot of European Derby bouts, a showing of "Derby, Baby", hosting Scotland's first international Derby tournament, a Home Teams season, and of course, competing at Europe's first WFTDA certified tournament, Track Queens. Before we talk about the year individually, what's been your favourite moment out of all of this?

This whole year has been amazing, so just picking one favourite moment is really hard, I think if we had managed to do a 5 tiered pyramid at our awards night that could have been it but, alas, that didn’t quite work so I guess it would probably be the Chaos On The Clyde tournament. There was a lot of stress and preparation leading up to this (and during it) from everyone in the league but we pulled it off, and we won.

Obviously, it's been a very good year for you personally, Captaining GRD in international tournaments, winning MVP Blocker at Track Queens, and MVP and Best Blocker from your fellow skaters at GRD, and appearing in "Derby Baby!".

Yeah, for me 2012 has been an amazing year: I felt really lucky to have had all the opportunities that I have (embarrassing as they may have been; seeing yourself on screen infront of a packed room of people) and still a bit in shock at winning MVP for Track Queens. I think this could well be one of those years that I reminisce about to my grandchildren, so many good things have happened.

The Irn Bruisers have had a very busy schedule this year, beginning with Tattoo Freeze down in Telford in January, where you played Central City for the first time this year, nearly beating them (97-77), in a close single-period bout. Capping off the year, the Bruisers played CCR again in your final bout in Track Queens in Berlin, winning rather more handily (149:208). Is this a testament to GRD's improvement over the year, or merely to the fact that the Bruisers have always been a strong second-period team?

I think the Bruisers have definitely improved a lot this year in terms of tactics, strategy team cohesion and skating ability but , yes, the Bruisers still appear to be a second half team, though we are working on the first half, so you never know what could have happened in January if we had had that extra 30 minutes.

Of the other teams you played more than once this year, Stockholm, Crime City and Gent, all noticeably improved by the second time you faced them (all at Track Queens). Since GRD had had a really good year up to this point (you're still, by some rankings, the 2nd ranked league in the UK), how do you think this reflects on the improvement in European Derby in the past year?

When you talk to the girls from those leagues you can see their fire, they are hungry for Derby and they are putting their all into it. It is amazing to have seen games like Berlin v Gent and how far they have come. I think 2013 will be a very exciting year for European Derby and hopefully with more teams pushing themselves and the gap between teams tightening we can only make each other better. The Maiden Grrders have also had a good year, winning all but two of their bouts, and positioning themselves as potentially the third best team in Scotland with wins over Dundee and Granite City. Would you like to see the Maidens play more European Derby next year?

Hopefully the Maidens will get more chances to play some European Derby next year, the limiting factor is mainly the cost required for a team to bring both their A and B team across. Saying that though there are some amazing teams in the UK:  teams who were under the radar a year ago are now giving established teams a run for their money so there should be plenty of challengers at home as well

Of course, GRD also hosted their own tournament this summer: the first ever European Roller Derby tournament held in Scotland. How was the experience of co-captaining the team to victory in this kind of event?

Generally I tend to block out bad memories and only concentrate on the good ones so Chaos was amazing… but it was hard at times too: deciding who to put on rosters and having to tell people they can’t play a game: it is not one of my strong points as a Captain. The team were amazing though and they made things easy for us: we played as team and enjoyed being a team and I’m really proud of them all.

The rest of the league was also so supportive of this event, lots of people put in hours and hours of work behind the scenes to make it so successful. We also had financial help from our sponsors to help pull this event off and Glasgow Sports Council who provided us with funding

As for Chaos 2: well the Kelvinhall are shutting down next year for renovation so we will be losing it as both our bouting and training space. Ideally we would have liked to have had all travel team games there and Home Teams in the Arc but it looks like that is off the cards now. Hopefully we will be able to secure another location but if anyone wants to offer us a warehouse, sports hall, any building large enough for a Derby track then don’t hesitate to get in touch.

Track Queens, of course, has to be mentioned, as the first WFTDA Sanctioned Derby tournament in Europe. This is now, including your time with All Ireland Roller Derby for the World Cup last year, your 4th big semi-endurance style tournament in the past 12 months. What’ve you learned about conditioning and mental endurance for this kind of event, that you didn’t know before the World Cup?

When I played in the World Cup I was still at the point in my Derby career where I would be so nervous that I couldn’t eat for at least a day before a game, given that the world cup was over 4 days this kind of sucked and I pretty much starved myself. Luckily now I don’t get as nervous so I’m all about eating the right food at the right time, making sure I have enough energy to last the tournament. As for physically in the lead up to the tournament I was trying my best to improve my cardio as it is one of my weakest areas. Mentally it is very draining: I think this is one thing we need to work on more as a team and individually, it is really hard to go straight into another game from a loss and still remain focused and positive.

There's also been a lot of local outreach from Glasgow Roller Derby this year, as always, with gig nights, the Johnny 7, Blingo!, a showing of Derby Baby!, and the opening of the National Museum of Roller Derby's first exhibition. How important do you think this kind of non-sport involvement is to Roller Derby as a community?

I think it’s a great thing in Roller Derby to see teams all over the world give back to the community. Every year GRD chooses a charity where we donate the money from the raffles at our bouts and I think it’s great that we can be involved and help out in some way

We also love to hear back from our fans and have them involved in our Roller Derby community on how we can improve things;  this year we had some issues with our ticketing system and we are working on a way to make it better and easier for the fans.

For our fundraisers I think it is really good to have a range of events outside the sport where the team can bond, hang out and meet other people, be it refs, fans, NSO’s skaters from other leagues. Derby is still a very tight knit community and great things can come from networking and great friends can be made. Aside from that, it is good to give GRD publicity and for fundraising as 2012 has been an expensive year and 2013 is shaping up to be the same.

Glasgow Roller Derby became a full WFTDA member league early this year. Has this changed how you feel about your status as a skater, or the emphasis the team places on picking opponents? How long before GRD rank in the realm of teams who can compete at regionals?

It has changed the types of opponents we look at, if we want to become ranked in the WFTDA rankings then we need to make sure we play enough sanctioned bouts and so other WFTDA teams certainly have that appeal. I would love to see us at regionals but as seen at Track Queens there will be a lot of tough competition in Europe for the spots. Hopefully we will remain up there among them.

Finally, as is now traditional in the past month: are you looking forward to bouting under the new WFTDA rules next season?

Oh yes, we’ve scrimmaged under it a few times and so far it’s been really good. I’m really looking forward to the new tactics and game play that will be introduced, so I can sit down and work out some counter strategies and counter counter strategies.

With such an exciting past year, can you hint at what GRD has in store for 2013?