Monthly Diary of a League: Fierce Valley in May: Brawny Tyler

Just in time for Eurovision on Saturday, this month's diary from Fierce Valley Roller Girls is by UK-entry-namesake, Brawny Tyler! 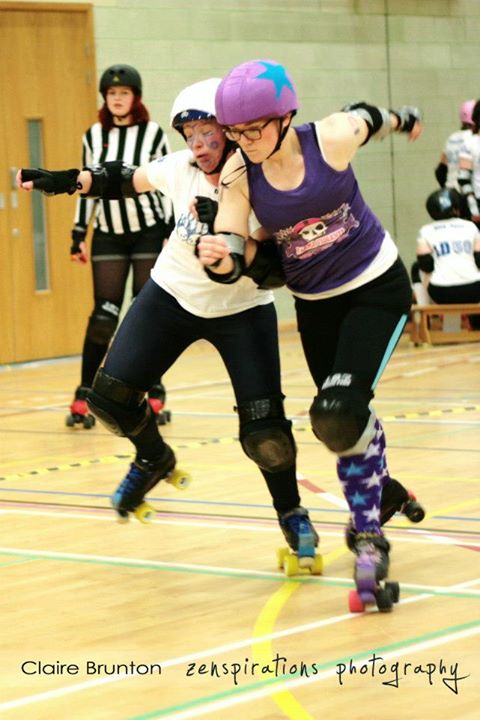 My sister Meadhbh started with Belfast Roller Derby in August 2011 and wouldn't stop talking about it. I went to see her bout in an intra league game in November, despite being totally baffled by the rules, I loved it. She told me about Fierce Valley and with a bit of encouragement I got in contact and I haven't looked back.

Have to say my sister, eh :) Sylvia Wrath. She really is though, I'm so proud of how far she's come with roller derby, now being Captain of the Banshees. I got the chance to scrim with her but I'm not sure I'd want to play against her!

It was a nightmare choosing a name, I struggled to find something I thought was good enough. Some things I thought were hilarious, flopped when I told other people... Brawny Tyler just popped into my head one day; I do love a good power ballad, particularly Total Eclipse of the Heart. I'm a little ashamed of her most recent song for Eurovision though, she's letting the side down.

Fear, particularly of falling and hurting myself. As my confidence grew though, the fear subsided, or at least the drive to get better started to override the fear. That and a pair of padded shorts.

Because derby has taken over my life I always feel the need to tell people about it. Recently the trainer taking my gym induction, I talked her in to contacting FVRG about Fresh Meat.

Embracing and being more positive about the new WFTDA mins. At first it was a bit daunting but at least it's forced me to focus on certain skills like transitions. After picking up some good tips at the GRD bootcamp I'm sure I'll get it...eventually!

I'm finding it hard getting used to being split up as we prepare for the intra-league, it feels strange to be pitting myself against people who have been team mates. It is all in good spirit though and I'm really looking forward to it. Ask me next week though and I'll probably say climbing Ben Nevis!

Our Intraleague bout, Revenge Of The Fallen, is very soon. Deceptiquads Vs Autoblocks; watch out for shiney leggings. It's really exciting because we have enough skaters for two teams, it's great to see FVRG growing!