It's the lifeblood of any Roller Derby league. The entry point for all beginners. Our apprenticeship. But for those looking in from the outside, thinking of dipping their toes in the off-axis oval waters of derby, there can still be a lot of question marks over what Fresh Meat actually is.

With our next Fresh Meat taster session on the horizon, Bairn City Rollers took a look at some of the more frequent queries from those looking to join Fresh Meat – be it with our league or elsewhere :-) 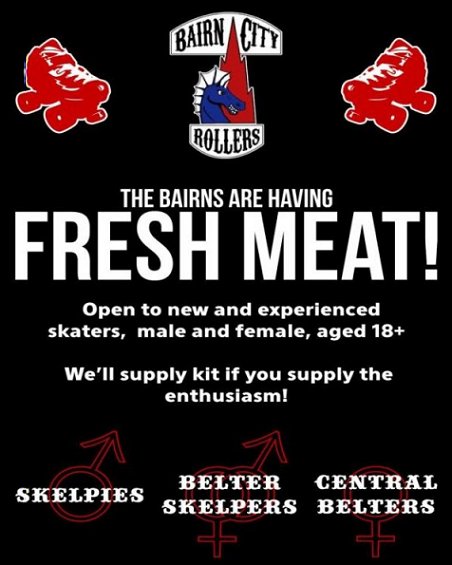 Not a problem. Fresh Meat courses will teach you skating from the basics (and we mean the basics) upwards, so your existing skating ability is irrelevant. One of the first things you will be taught is how to fall safely, so whatever other obstacles you encounter from there you can be confident in not getting hurt.

Don't worry, you're not alone there. Many skaters now at bouting level knew little or nothing about derby when they first tried out Fresh Meat, so it's nothing to be concerned about. One of our skaters believed it to be "something like rugby but on skates", while another saw "an elaborate game of tag". Indeed your own writer was, somewhat embarrassingly, originally under the impression that it was in fact a worked sport like pro-wrestling (even after I started training I still had lingering thoughts that maybe they would smarten me up to it after a couple weeks...).

If you can bring the enthusiasm, we can bring pretty much all the rest. At BCR we can provide skates and pads in more or less every size for those wanting to give Fresh Meat a go - all you require to bring is your own mouthguard (we don't share them!) - and most other leagues will have similar set-ups for beginners to give it a try before looking at investing in their own gear.

A whole new world of fun! Polling some fellow Bairn City Rollers on the matter, here are some of the responses: "Getting my cardio back", "Having a second family", "Confidence", "The most fun ever!". Your writer now tends to mentally arrange his life's timeline by Before Derby and After Derby, such is the scale of changes it makes! It truly is a sport like no other, you'll never know how you lived without it.

That's an understandable concern, especially if you are starting out with little skate experience, but chances are by the time you've reached that level (and there will be plenty fun training to be had before you get there) your confidence in falling safely and recovering will be such that it won't be an issue any more. Even then, if it's really not going to be your thing then there are plenty other fun and rewarding branches of derby you can go into such as NSO-ing and refereeing.

"But what if roller derby takes over my life?"

Okay, this one may well happen!

So go on, give it a go! Find out which leagues are closest to you and get in touch. It's a friendly sport that is big on sharing a family ethos, if one league might not be suitable for you they'll be sure to point you in the direction of another one.

Bairn City Rollers taster session for our next Fresh Meat class will be on the 21st of July. If you are interested then contact us for further information or drop by our Facebook page.