Continuing our review of 2013, we caught up with BCR Founder, Skelpies captain (and Power of Scotland skater) iHorror to get his thoughts about the year from Bairn City Rollers' perspective. 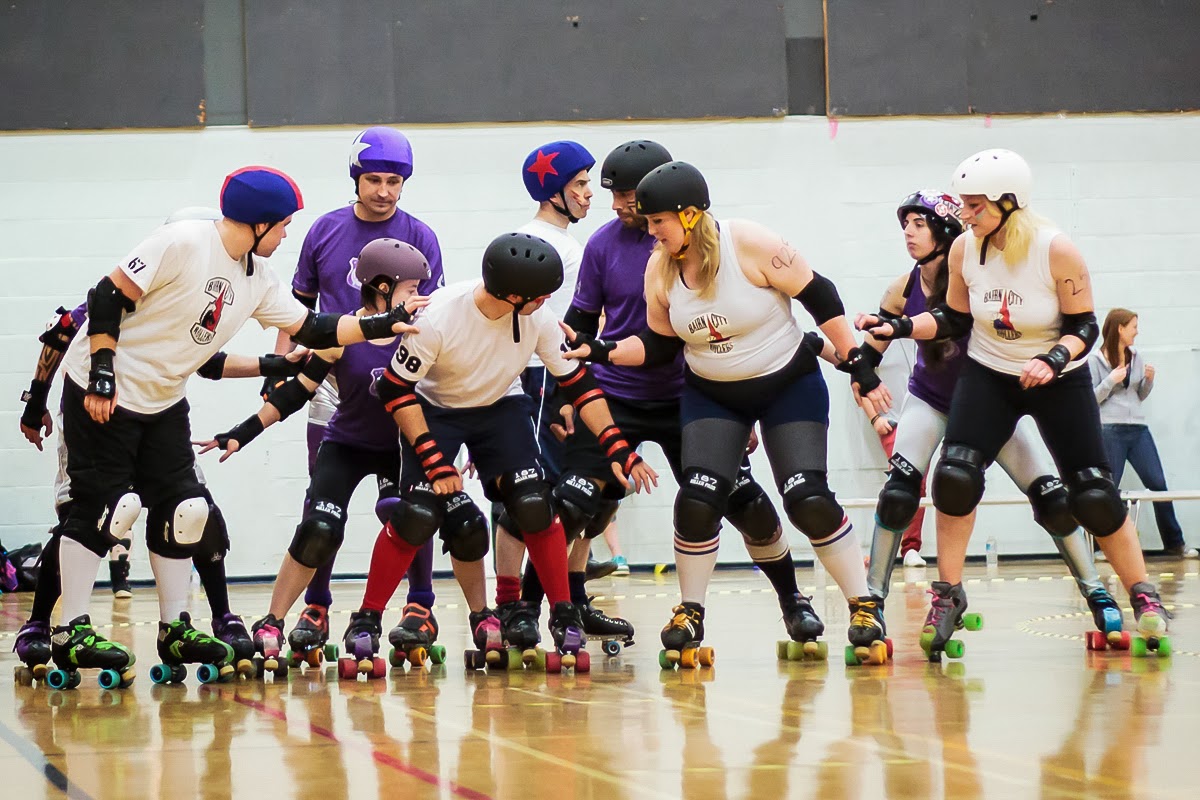 Bairn City Rollers have had a very busy year, managing almost one bout for every month, despite only starting in May. While it's certainly made an impression on Scottish derby, how has the pace affected the league as a whole?

The Skelpies only played 3 public bouts, so we have found it very manageable. I think the Belters found it okay as their roster grew quite rapidly during 2013, so each bout had 5/6 "cherry poppers" in their line up. Most of the girls have also just come out of their first year with an abundance of priceless experience after going head to head with some top teams like Furness Firecrackers, Rainy City and Lothian Derby Dolls.

Of course, the majority of those bouts were women's bouts, with the Central Belters taking on a rather varied selection of opponents. What was your favourite bout that the Belters played? Are there particular opponents you're planning to make rematches with?

Personally, the bout against Preston. In my opinion, August 25th was a turning point for the Belters. They had had a massive turn around in personnel, with the new girls coming in an doing an incredible job. Seeing everyone gel so well on track was very pleasing to watch!

Both the Skelpies and the Belters have had invites to rematches flooding in, but we have also had interest from new opponents in equal measure. We are planning on heading down to Barrow to play our good friends in Barrow Infernos again, so I'm looking forward to settling the score there!

Speaking of rematches, the Central Belters' first win came in the Battle of Britain tournament, playing their very first opponents, Lothian Derby Dolls, once more. Just from the crowd reaction, it was clear that the win meant a lot to the team; tell us more about the Belters got there.

The win against Lothian was a massive milestone for the girls. As you mentioned, the Dolls were their first opponents on the 18th of May. The Belters were beaten and have, since then, worked tirelessly to improve. The Belters spent the next few months bouting teams such as North Wales, Furness Firecrackers, Rainy City, Preston etc. and scrimming against even more. Every week has shown steady improvement for the Belters, which came to fruition as they held their own at the Battle of Britain.

Meanwhile, your co-ed team, the Belter Skelpers, only managed to find one team to play them, and that a combination of Mean City and New Town working together.  Being one of the very first co-ed leagues in Scotland (and, indeed, the UK), has the disadvantage of providing very few opponents. How are Bairn City planning on improving competition in the co-ed game?

Belters Skelpers VS Mean Town was a lot of fun, and a very close game! We had quite a lot of feedback from people that watched the bout, saying how much fun they had. There was interest in us playing coed bouts in England earlier on in the year, but we decided to concentrate on the Skelpies and Central Belters individually first. We've also had quite a lot of mix teams come to Falkirk to scrim against us, which may hopefully spur a few public bouts in 2014. Coed still seems a bit taboo with a percentage of the Derby community, but our doors are always open for people to come train with us to check it out.

The Skelpies have played some tough opponents this year. We kicked things off against South Wales Silures in April, which contained many skaters that had previously skated for The Expendables in the 2012 European Championships. We then played against Tyne and Fear in June and a Barrow Infernos/Tyne and Fear mixed team in July, who speak for themselves. They were both very good teams. Since then we have been doing nothing but train as hard as we can, scrim as often as we can and hopefully the benefits of that will be reaped throughout 2014. I wouldn't like to predict anything against Mean City, in all honesty. Mean City will be a difficult team to beat with Konanbourg, Tea Virus, Whyte & MacDie and Zero G all making the Scotland roster. I have also played alongside BruiseDog, Blue Grass, Samikaze and Grizzly so I know what talent their team possesses. We also have a few new faces ready to take to the track, who I am sure will more than raise a few eyebrows, however I'm not willing to give away too much! I think both teams are evenly matched and it is poised to be an incredible bout.

Quite a few of Bairn City's Skelpies tried out for Power of Scotland, the Scottish Men's Roller Derby team, and many of them got in. How does it feel to have gone from "new league" to providing a reasonable chunk of the national team in so short a time?

When I first started Bairn City, I honestly wasn't too sure we would transcend above a recreational league however the competitive nature and desire to take individual development to that next level has been second to none. Everyone within the league has shown complete dedication to improvment and moving the league forward, so it feels incredible to see everyone's hard work paying off. It made me so proud to see so many of my team mates being selected. Myself, Dreads (Dreadie Mercury) and Dead Hardy have been here from day one, with Baron and Shady joining a few months after. I think we're over our honeymoon period though, and as they say "the hard work starts now." Looking through the Scotland roster it's good to see Capital City, Mean City and the Brawlermen all being represented at this years World Cup. It will bring about a positive boost for men's derby in Scotland and I can't wait to see what 2014 will hold.

With this year now over, can you tell us about Bairn City's plans for the future? What's coming up in 2014?

There's a few very exciting things going on behind closed doors, but I'm afraid Basha Roo might hip check me if I told you!

The Skelpies have a big year coming up, with some of us going to the World Cup in March. We also have a couple of details to iron out on a few more events, which I'm really looking forward to. The Belters are also currently booking up their year, with a few away bouts that will see them leave the comfort of Scotland.

As a whole, we hope 2014 turns out to be as fun as 2013, that we can continue to grow and introduce more people to the wonders of Roller Derby!