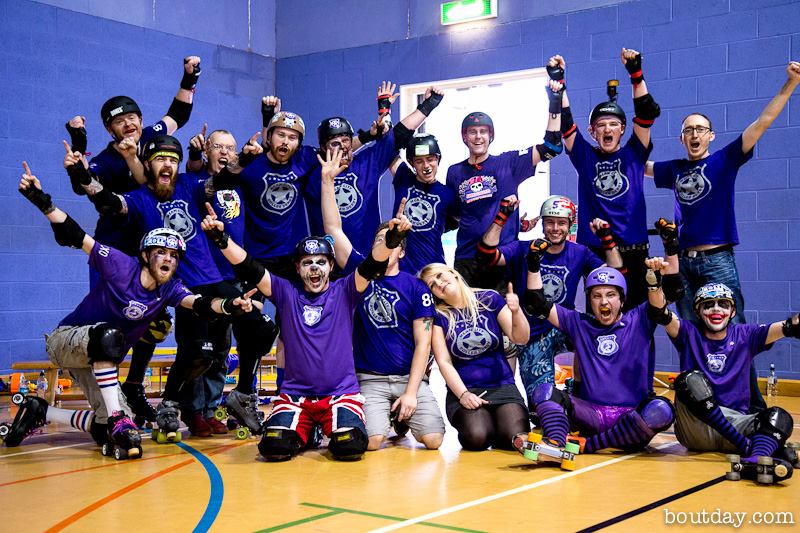 1. Within a few months of starting up, Mean City were on a fast-moving recruitment drive. The last time we spoke, you had 10 league members - can you tell us how many you have now? Tell us a bit more about the new skaters at Mean City who joined in 2013!

We have over 20 regular attendees, 12 of whom are now bout ready. The majority of skaters in our league joined us in 2013. Zero, Gord N' THorg, Trip Hazard, Bawsmalinger, Samikaze, Middenface Muir, Grizzly G Bear and Blue Grass have all done amazingly in their first year after passing their mins. We also have a whole host of new skaters that are honing their skills to get ready for a slot on the team.

2. From the beginning, Mean City were extremely committed to training, and were even hosting co-ed skating skills sessions for other leagues to attend. Has this changed in the past year now that you are bringing in beginners, as well as training more advanced skaters?

Some things have changed, like making sure that we keep the interest of everyone - no matter what level they are at. It's a challenging prospect and a double-edged sword. So instead of just catering to one level, we split our newbies into groups based on ability. Some folks come to us already able to skate better than existing members of the team but have no idea of the roller derby rules and strategy; while others come armed with this knowledge but not the skating ability.

Training is a collaborative process to get the best for an individual until they are ready to join in our main drills. There is no six month program - everyone is assessed regularly on all aspects of the sport, and as soon as they are ready we will put them through a Minimum Skills assessment.

We will no doubt run another taster session later in the year for those that want to check out the sport. Ladies and gents will both be welcome as we provide a direct gateway to our sisters at Glasgow Roller Derby.

3. All of the Scottish Men's Teams have certainly made their stamp on the roller derby community and are no longer seen as the 'newbies' trying to catch up with the women's teams.  Staring a roller derby league is a big enough challenge - never mind introducing another culture at the same time! Can you tell us about the challenges you faced along the way, and how you overcame them to rise to the position you are in now?

The biggest challenge was showing we are not a threat to the existing derby community. We did this by working closely as possible with our sisters in neighbouring female leagues. We wanted to know from them what it takes to ensure we represent the sport in the best way possible - and we didn't want to reinvent the wheel - so working together proved extremely beneficial.

As part of the initial steering committee for the World Cup squad,  I am really glad to see how things are shaping up. We are very pleased to have four MCRD skaters on the Power of Scotland roster: Whyte & MacDie, Tea-Virus, Konanbourg and Zero all made the cut. I won't lie, I wish I was playing with them, but with so many great skaters to choose from the selection process could not have been an easy job. That being said, I am excited about going down to the World Cup  in Birmingham to cheer the lads on.

Having a national team opens up a lot of doors with regards to conversations about sponsorship and funding for roller derby across Scotland. It also brings a great opportunity for publicity and growth of leagues at a local level as the sport gets more publicity.

5. It hasn't gone unnoticed that Mean City have forged strong links in the roller derby community. Would you mind telling us your secrets of your success?

Mean City was spawned from the derby community and we love to give back wherever we can. We had a lot of support when we started up but we had to go looking for it by knocking on doors and finding out how the community could help us. As a league we have decided to be proactive and reach out to all the existing and new leagues. So our guys have helped with everything from taking coaching sessions, to just being a point of contact to ask for more information.

We have visited new leagues in the West of Scotland, including Ayrshire Roller Derby and the Doonhame Derby Dolls - it's great to see them growing so quickly! We are happy to note that our help has been welcomed with open arms.

6. You have also made strong links in the wider community in the Glasgow area. Can you tell us more about the benefits of joining forces with companies such as RollerStop and 5th Blocker Skaters? How have these relationships helped your overall presence in Glasgow?

Tying in with a general roller skating community (outside of roller derby) has been mutually beneficial. Most of us have attended RollerStop since their first roller disco back in October 2011. Some of our best Fresh Meat was discovered at RollerStop encounters! Siobhan and the team have been very supportive - not to mention, this is where we met Whyte & MacDie and Sara, our Bench Manager.

It was a no brainer to tie in with Lawless at 5th Blocker Skates since our guys obviously need equipment and we always get a great service there - even at short notice when we need some scrim tops made for us!

Café Phoenix have been great to us too, offering us a work space for team chats and awesome Swedish meatballs. Not to mention an awesome Line-Up manager!

We are also happy to announce that we are now a Queens Of The Sin Bin endorsed team. They recently made us some awesome 'boutfits' and we could not be happier with them. All of these things have helped establish us as a wellknown name throughout the local and wider derby community.

7. What would you consider as Mean City's biggest achievement in 2013? Are their any highlights that stand out from a very busy year?

There can be no question - our biggest achievement and highlight had to be putting on our first ever bout in October: Blocking Bad. We were actually worried about how many people would turn up, but we really shouldn't have been since 150+ spectators packed into The ARC that day! We organised the bout as a double-header and invited New Town Roller Girls to play since they had never bouted before either.  Mean City played against Barrow Infernos, and New Town played against The Furness Firecrackers. Although both of the Away teams were victorious, it was great to get our first bouts out of the way with two awesomely friendly and strong teams.

Also, we are delighted that we are now officially the brother league of Glasgow Roller Derby! It really makes us proud to be tied in with them and we will be working more closely in 2014. 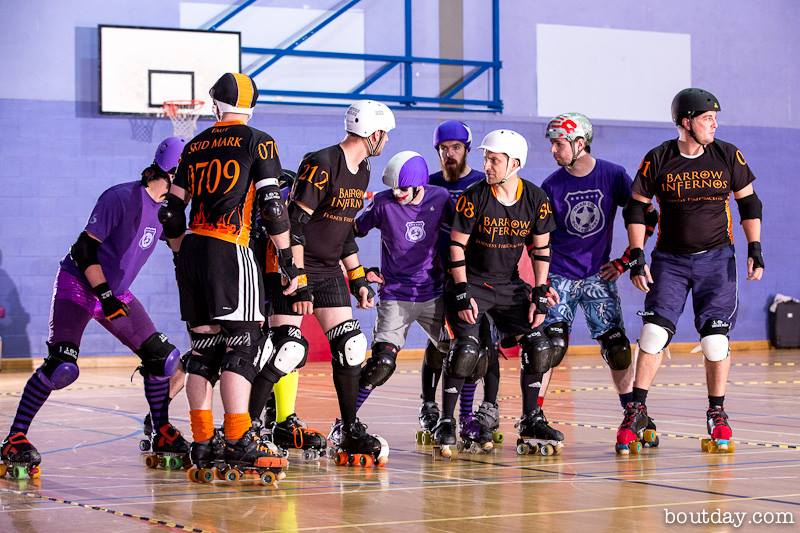 8. What would you consider as your personal biggest achievement with Mean City in 2013?

See above! The stress of putting on our first bout almost took me to the edge, I am just glad that I managed to pull it off. Luckily I have a great team behind me both on track and off.

Well we have just about recovered from a tough game last weekend against Bairn City Rollers' Skelpies. It's great to see how much they have grown over the past year and a bit! However, I do believe we may owe them a rematch later this year in Glasgow so I look forward to that. I can't comment on the bout calendar just now as a lot is being finalised, but we have had some queries from some international teams so I predict that Mean City may be on the road a bit. Apart from that Bout, Train - Bout, Train is the plan.