Latest in a series of year review interviews, we catch up with Crash Overload, Vice Chair and Head Coach of the Fierce Valley Roller Cubs. 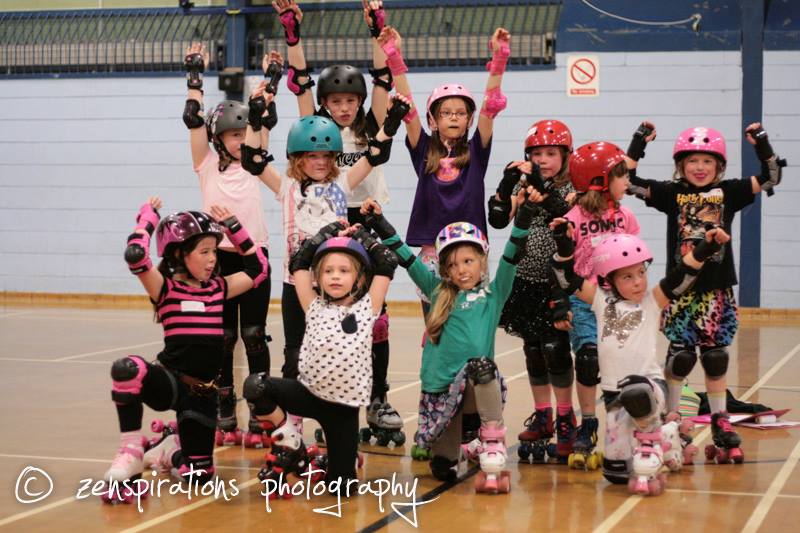 It's been a busy year for the Fierce Valley Roller Cubs,from raising awareness and funds with events to running your first trial sessions. What have been the highs, and lows, of the past year?

These last six months have definitely been a rollercoaster. The highs include seeing the interest in roller derby from local children and watching them progress from their fresh meat taster session in September to taking on their Level 1 training and for many of them passing this assessment and progressing on to the next level of training. The cubs are so enthusiastic and its fantastic to see them coming along to bouts to support their local roller derby teams as well as fully taking on the challenges that roller derby brings. We have since taken in another new batch of skaters in January and we are all enjoying watching our league expand and grow.

To be honest, we haven't seen many lows this year and the cubs committee and coaches all work hard to communicate and take the league forward with the interests of the skaters in mind.

The idea to run a Junior League goes back a little further than the past year, first considered in 2011, it's fair to say it's taken longer than you might have liked to get to where you are now. What does it mean to to have The Cubs up and running for those who have been part of that long process?

It's true that it's taken a long time to get the Cubs off the ground, the idea was first born in 2011 as a committee of FVRG, but due to a number of factors - mainly money - we couldn't get past the idea stage for a while. When things really started to happen, around summer 2013, everything happened really quickly and it's not an exaggeration to say that we haven't stopped since then. For those that have been involved from the start, it's still hard to believe how far we've come in a short period of time. Looking at our current groups of skaters and seeing the interest in the Cubs continue to grow, it's more than we ever hoped for. Delighted is probably the word to use, not to mention proud!

The Fierce Valley Roller Cubs are currently the only Junior league in Scotland, and one of a handful in the UK, have you had any help and advice from the other Junior Leagues in the country?

We have taken advice from the JRDA website on training and assessments and are part of a page on Facebook for junior derby coaches to chat and swap advice and ideas. Our coaches all have differing levels of experience of coaching adults and children and with the combined experience we have, we are moving steadily forward. We have been making contact with other junior leagues in the hope that when our league are ready - we will have teams to play against.

There are some differences between the Junior Roller Derby ruleset and it's WFTDA parent, which must influence training and teaching methods. What challenges did you face in adapting an adult Fresh Meat session to work with younger skaters?

To be honest, in building the teaching plans, we looked at the skillset required and started creating plans designed for children of varying ages - our league starts at age 5 - and abilities. The skillset required is almost the same as the WFTDA skillset so the basics are the same, its just the methods of teaching that differ. We spend time talking through things with the cubs, explaining in language they will understand and try to make each drill fun but at the same time encourage practise and repetition in order to get better at the skill in order to move on.

We play games and run team building events to allow the cubs to talk and get to know each other, as there is not much time for that during a training session. We also encourage the cubs to attend roller derby bouts run by local adult leagues to allow their understanding of the game and the rules to develop. We have run a demo scrim for the Level 1 skaters using local adult skaters and refs to show penalties, walls, blocking and jamming skills which all helps to develop the cubs enthusiasm and confidence in the sport.

The first sessions were held at the beginning of September 2013 and proved very successful, were you surprised at how readily the Cubs soaked up information and skills?

I think all of the coaches have been amazed at how quickly the cubs pick up skills and how determined they are - when they fall they just bounce back up and get on with it! They ask great questions and the rapport between the cubs themselves and between the cubs and the coaches is building and we can see the start of a strong league developing. The cubs are already talking about being jammers and pivots, getting excited at the prospect of one day starting to bout as a team and its very encouraging for us to see and hear this.

We're all familiar with the Roller Derby saved my soul story and how the sport has positively affected many of it's participants. How do you think Derby will impact on these young skaters?

We have already seen the impact on some of the cubs, going from being shy and quiet to more confident young individuals. They are increasing their strength and stamina and are overall positive in their outlook and in their perception of the sport. They are all developing strong friendships with each other and have found role models in some of the adult skaters and coaches.

When the cubs come along to a bout, we encourage them to come and speak to the skaters and you can see the excitement and awe in their faces. Some of our older cubs come along to the junior sessions and take the role of mentors for the younger cubs and we encourage them to develop their coaching and mentoring skills which in turn helps with their confidence and increases their commitment to the league.

And its not just the children who are impacted by roller derby, many of the adults who have not been involved in the sport before are now attending bouts, not to mention the parents who have signed up for taster sessions themselves as they are keen to try it. We also have family groups who are now buying skates and spending time as a family skating outdoors or at roller discos so its fantastic to see how the sport can have an effect on an entire family!

Lastly,can you tell us what your plans are for The Cubs in the coming year?

Well right now we are about to move in to another round of assessments and judging by recent training sessions, many of the cubs are looking good to get through this challenge. JRDA have three skill levels for juniors and by the summer we are hoping to have skaters who will have passed all three levels and can move into advanced training and start working seriously on drills and look towards creating a bouting team. We have another fresh meat session planned for a new intake of skaters at Easter too. We are increasing the number of training sessions to accommodate the number of skaters at the different levels and because we also have an age split - 5 to 10 and 11 to 17 - this means double the amount of sessions required at each level.

We are also looking to run another fundraising event in the very near future and hope to host a junior roller derby summer school for skaters of all levels. So all in all, its been a busy but awesome year so far and all I can say is - onwards and upwards.