Our last team for this week, and the last team in our Africa and Asia-Pacific group, in our World Cup coverage is the second veteran team from 2011 - Team New Zealand!

Team New Zealand shared the same initial group as Team Scotland in 2011, and despite the unfortunate effects of both having to play Team USA in their placement bouts, eventually fought their way all the way to 8th place. They're returning to the World Cup this time around with a definite intent to improve on that!

Team New Zealand Coach Pieces of Hate took the time to answer our questions, around a month ago. (We've added updates as always to cover changes since the interview took place). 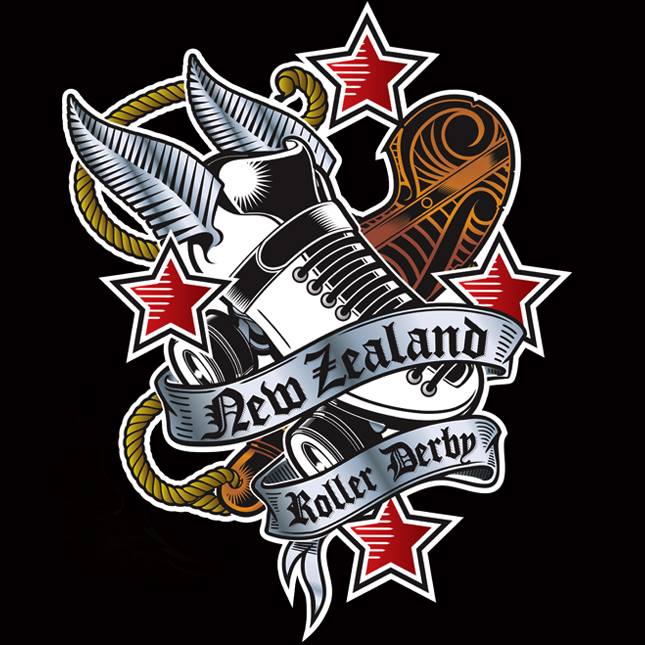 On the topic of team selection - Team NZ is strongly predominantly composed of skaters from NZ leagues (with only a few from USA,Canada,Australia). I believe that was also the case in 2011. Can you tell me a bit about how your team selection process worked (including getting Coach positions etc)? New Zealand has formed an association to govern the sport here and set some standards. It was also formed to take complete control of the World Cup Team and the selection process. So we had an AGM and defined the positions needed to put the team together and its requirements and that went to vote. After the AGM a job description was set out to all leagues that joined the NZRDA (New Zealand Roller Derby Association) advertising for the position of Head Coach, Team Manager and Two Selectors. Once people applied for these roles, they were then voted in by member leagues. The Selectors (Head Coach being one of them), traveled to Auckland, Wellington and Christchurch and held try outs over 1 full day at each venue. We also had criteria for overseas based players to send video unedited, complete a skills test and fitness test, pass a written test and strategy test put together by the Head Coach. Each person had to become a member of NZRDA and if not through their own league then as an associate member for a cost of $50, and we charged everyone $50 to try-out for Team NZ too. This covered the cost of flights for the coaches and selectors, Stadium hire and admin fees.

Flying to the USA from anywhere is expensive as a team (as are travel costs just for the training etc). How have you been fundraising and achieving sponsorship? OMG, we are so far behind on fundraising this time round, just mostly because crowd-funding is so saturated, leagues aren't making money like they used to at games, so we're not getting donations, we have a squad of 30 and some feel like not helping unless they know they're going to make the final 20, so it's been really hard. We have done an limited edition merch sale that made around $6K for the team, we've had a couple of donations and we have most members of the league out there figuring out some fundraising ideas that are going to happen in the next few months. We need to raise around $115,000.00 NZD to get there. We may have found someone to make our shirts for free, so that's a bit off the price. And we have a secret squirrel idea smouldering away behind the scenes that could be an international viral success (That will be something people can purchase and is going to be pretty fucken rad) . It's also something that none of the team know about, just me and my assistant! But all will be revealed in the next month or so... [This may be the Roll With Us "personalise our shirts with your messages" initiative Edited to add: no, it's not! According to Hate, it's something that is still secret even now!].

We also have people applying for sport funding, which is hard to get in NZ: unless you can finish in the Top 4 in the world or play an Olympic sport, they're not too interested. Pub charities and sponsorships are what we're hitting up in the next month. I just think this is going to cost each member traveling a lot of money this time round... it's been really hard getting money from people.

Thank you very much for your time!
Have a great day and good luck to Scotland and all the prep the team is doing to get to Dallas.

The Team New Zealand roster is: