Pride, passion and no regrets … except perhaps the kangaroo!

Now that the derby dust has settled on the 2014 Blood and Thunder World Cup – and a new year of our sport is already underway – it’s a good time to look back and reflect on a stellar set of performances from Team Scotland in Dallas.

The flat-track facts are two wins, a narrow loss and a Davina and Goliath-like performance against one of the best teams on the planet. 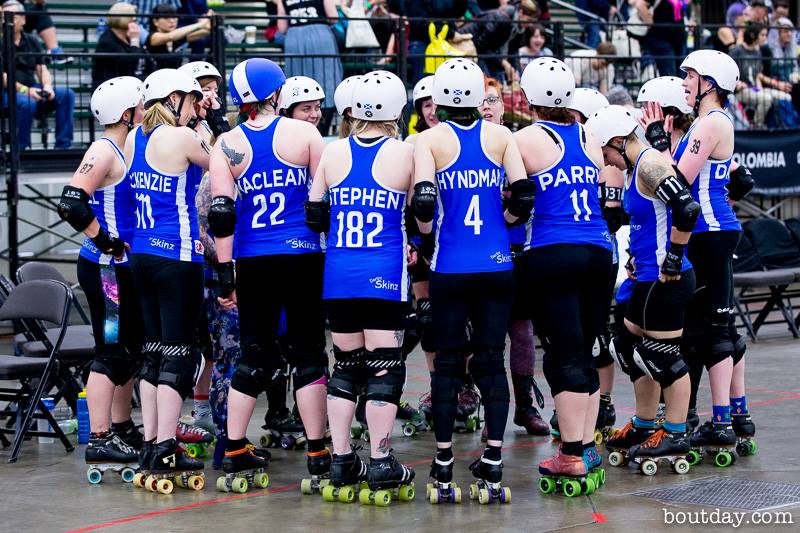 But that doesn’t begin to tell the story of just how sensational the Team Scotland players were – on and off the track – flying the flag for their country and impressing everyone who saw the blue belles rock their stuff.

Team Scotland kicked off the tournament with a terrific win over Team Mexico (207-45) and then – within hours – narrowly lost to Team Finland (126-78).

The following day, Team Scotland turned on the thrusters to beat Team Colombia (230-53), but they knew they had a daunting task ahead – with the mighty Team Australia in their path.

In the end, the Aussies beat Scotland 464-35, but the scoreline doesn’t reflect the skill, stamina and heart that was poured into the game by all the players, coaching staff and supporters.

SRD spoke to Team Scotland’s Captain Fantastic – Lianne Parry – on her memories of the World Cup, Kangaroogate and what’s next for Caledonian derby.

How was the World Cup for you, Captain?

It was a great experience! The tournament was huge this time and the venue was brilliant. The whole weekend had a completely different feeling to the last - bigger and a lot more hectic, but I loved seeing the new teams involved, and the semi-final and finals games were really inspiring to watch.

TS started strongly against Mexico, played well against Finland and beat Colombia convincingly. Are you pleased with how Scotland played?

Of course! It was a huge deal for us to face up against unknown teams like Mexico and Colombia - it's hard to describe how different a team’s style can be outside of Europe; it's always a good experience to be exposed to that.

The Finland game was one that a lot of the team enjoyed playing most, even though it was the most heartbreaking to lose! It felt like we could definitely have taken the win - we brought it to within a few points - but ultimately they played a really strong game and held it together better at the end. It felt like how playing roller derby should feel all of the time - I wish that game could have lasted two hours instead of 40 minutes!

What are your thoughts on the Australia game? They are an excellent side, but Scotland gave as good as they got – especially second half. What were the differences between the teams in the end?

My thoughts on the Australia game at the time were that it was probably going to feel as challenging as when we faced Team USA in 2011. I'm not sure all of the team were really fully prepared for just how tough it was going to be though, and in the first half I think we definitely struggled mentally in the game.

The style of play was nothing like I'd come up against before, they are quite simply, just really really flipping good at roller derby! Strong, focused, technically excellent, amazing at forcing penalties on their opponents, and they use their whole bodies way more intelligently than I've ever encountered in another team.

It was difficult to get a handle on how to block them, or do effective offence against their walls, and it probably took us until half-time to really get a grip on that a little! But what an opportunity - so much stuff to figure out and learn from that game!

Highlights on and off track?

Gahd too many to mention - on track definitely Australia - every jam I played against them - even if it was totally frustrating. Off track mostly food-related (giant steaks) in Dallas, Kangaroogate (being caught by the Dallas police hot footing it up the road with the Team Australia mascot), failing at the human knot game with the whole team but laughing so hard we forgot to be nervous, making up the stupid team awards at the end and just spending time with the best people.

Any regrets? Perhaps if Scotland had got a better draw…

Seriously - who bloody regrets anything from such an amazing experience! You do it, you try your best, you learn, you grow, you move on. We've started to gather feedback, stats and footage ready to start preparing for the next challenge. We've loads to work on and loads to change up, so I'm raring to get started. The way it worked out, we got to play Australia and I think I learned more from that game than any other game I've played in the last two years so I'm happy!

How does playing for your country compare to league? Is it tricky when you don’t know the players as well or did find you all worked well together?

For me, I guess playing for your country feels like it has way more pressure attached to it - you don't want to let a whole nation down and it seems like the whole world is watching. With your own league you just know each other so well, you know that even if you act like a complete tit by accident, they will still love you!

I guess it can be tricky on mixed teams - skaters from different leagues often have different 'defaults' on track, different cultural norms and are used to different ways of managing their teams - especially decision-making both on and off track - there is quite a lot to try to navigate through, but as you know the derby scene in Scotland is really closely knit so we all know each other fairly well, and there is a lot of respect and support between the leagues. I think the team gelled so well both on and off track this past year, that it won't take much work at all to really build on it and see fast improvements. It takes a big event like this to boost you to the next level sometimes.

How proud were you of your team?

So - even though this was the second time Team Scotland has played in a World Cup tournament, the team this time was mostly made up of skaters who hadn't played last time; some of whom have never been to the US or outside of Europe to play derby before, and a couple of whom were cheering Team Scotland on as spectators last time around.

They all seriously just took it in their stride, prepared well, stepped up to the challenge, gave so much positivity and energy to each game - even (especially!) when not on the game roster. I'm mostly proud of the sportswomanship the team showed, both to each other and to the teams we played. Even though there were difficult moments, decisions and disappointments, there were also huge smiles, happy tears, so much laughter in the changing room and lots of sweat (and a bit of facial bleeding too).

Where will Captain Parry and Team Scotland go from here?

Back to the drawing board! A wee break to let everyone re-focus on their own league challenges and then we'll start up a new training programme. Look out for some changes to the team leadership structure, it's always good to breathe new life and ideas into a team and we'll definitely be looking to open up some extra team roster spots to ensure we keep providing opportunities to skaters across Scotland. So - watch this space!