Visualising the Internationalisation of Roller Derby Part 2 of 2 (2011 to present).

In the first article in this series (link) we introduced the use of FlatTrackStats bout records to visualise the connections between derby teams over time. As with that article, this article is licensed Creative Commons: Attribution-NonCommercial-ShareAlike (you may reuse and share this article freely, as long as you attribute it to the author, do not profit from it, and license any derived work with the same license). This article was generated, as the previous one was, with data kindly provided by FlatTrackStats, licensed CC:BY-NC.

Previously, we covered the period in WFTDA, MRDA and Junior derby from the origins of organised derby in 2005 through to the emergence of junior derby, the men's game and the first truly international period of derby in 2010.

In this article, we will cover the period from 2011 to the start of 2015. As with the previous article, our colour coding scheme is: Red is USA, Blue is Canada,  Green: Europe, Cyan: Australia, Purple: New Zealand, Yellow the Asia-Pacificc, and White: Latin America. Groups which are densely connected from playing lots of games together will group physically closer in the plots, while less connected groups are thrown out to the edges.

The success of London Rollergirls playing across in the USA in 2010 inspired other European teams to try the same thing a year later (bolstered by the first ever World Cup also being in that year). The largest connected group in 2011 looked like: 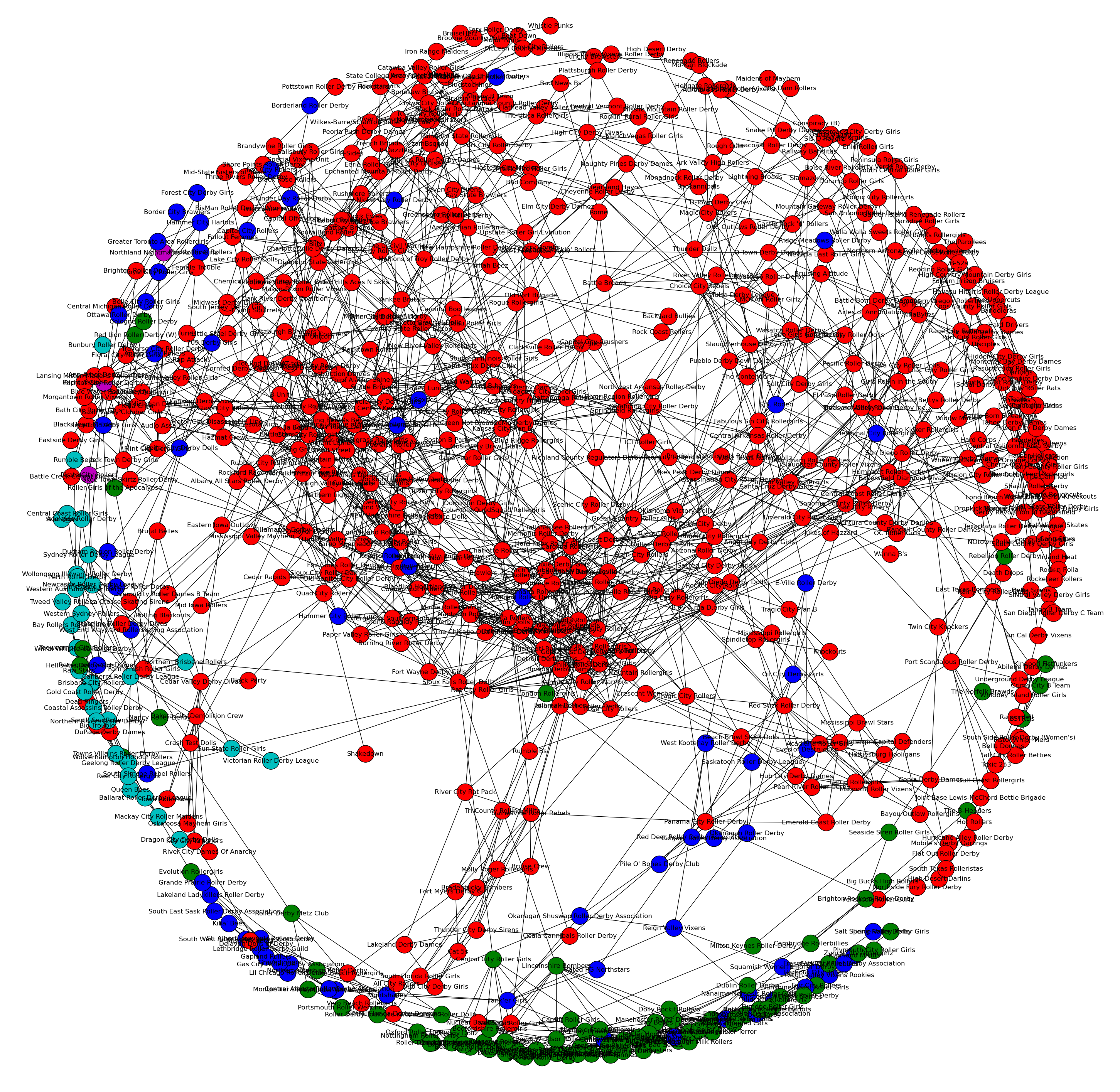 Compared to the 2010 plot, the additional European teams (Central City, the Lincolnshire Bombers et al) connecting with the USA pull the densely connected centre of the plot out somewhat, making it less insular. Conversely, London Rollergirls are pulled in the other direction - from this point on, their green dot is the one nestled in the core of the central, well-connected part of the plot, disconnected somewhat from the rest of Europe. We also see that Australasian derby has joined the International community proper, with Victorian Roller Derby League placing them in contact with the Americans.

Meanwhile, Latin America is showing the first signs of widespread derby growth, with a healthy crop of new leagues all playing each other: 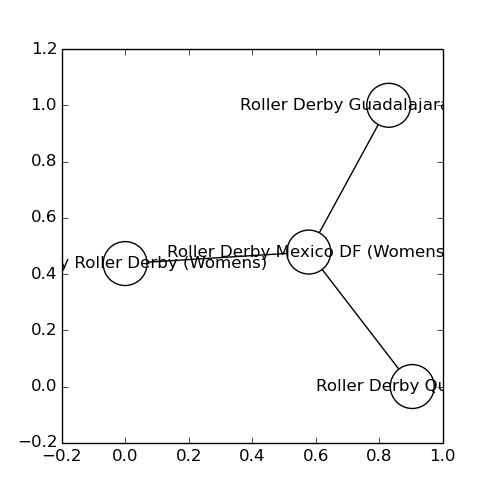 Men's derby, by contrast, is not yet fully international in 2011, with the biggest connected group resolutely USA and Canada: 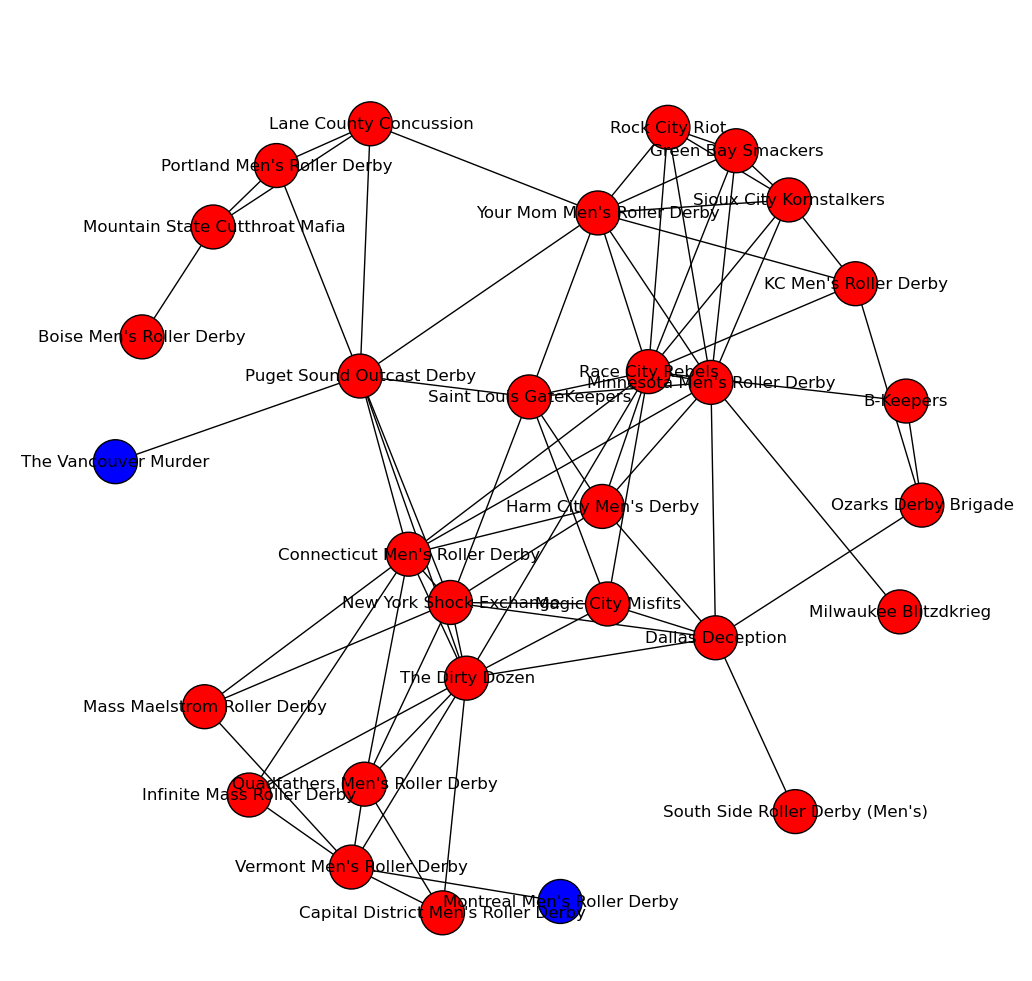 Although both Europe and Latin America are starting to show their own growth: 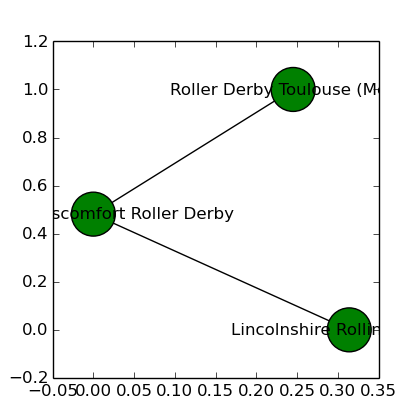 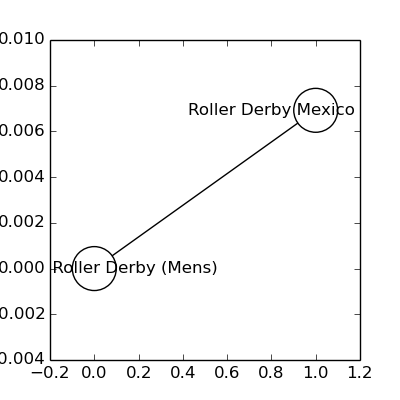 it was a year later, in 2012, that the Men's Derby community joined up across the Atlantic: 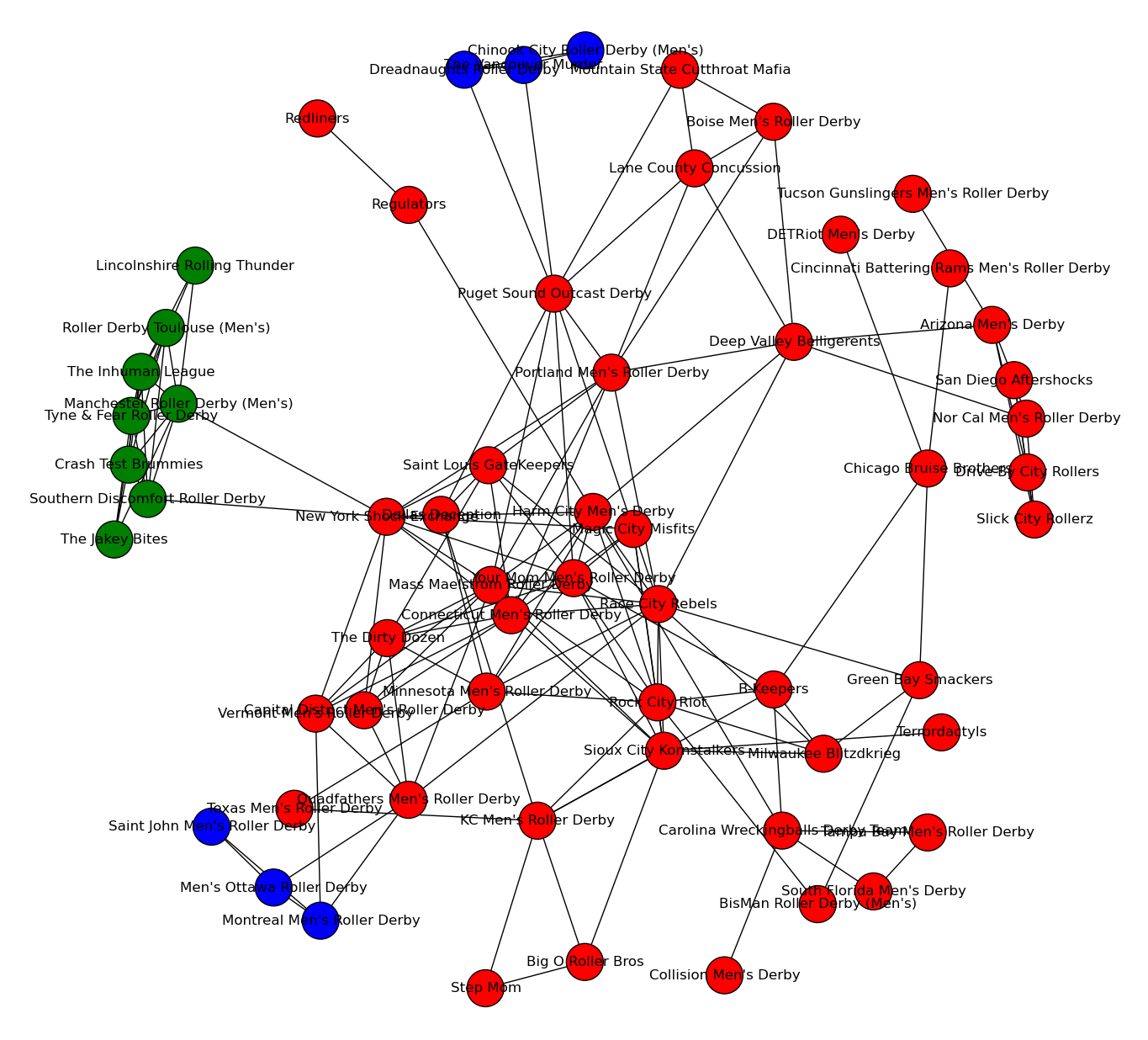 and not until 2013 that Latin America joined the biggest group: 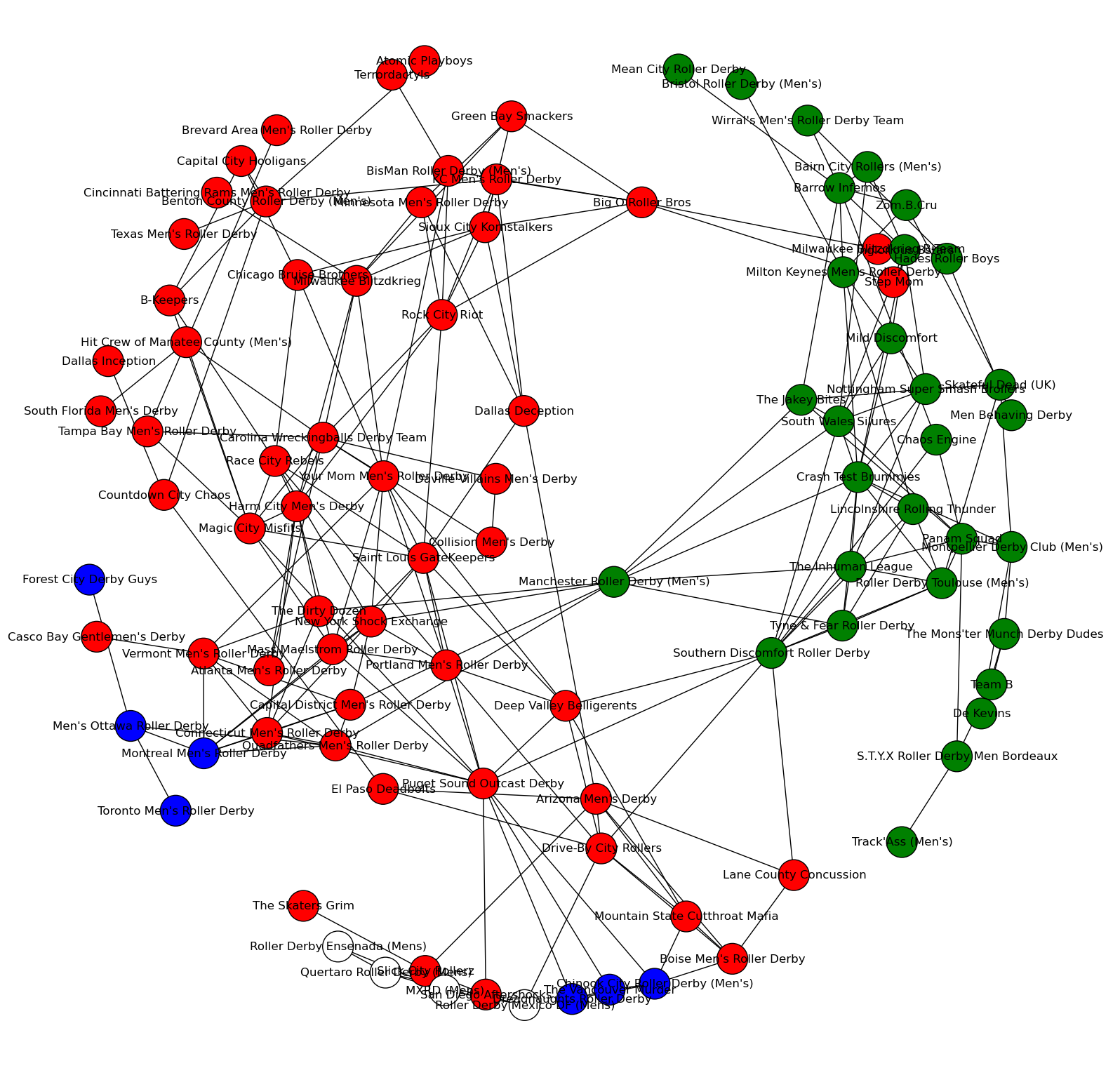 just in time for Men's Derby to properly take off in Australia (now the largest group separate from the main one): 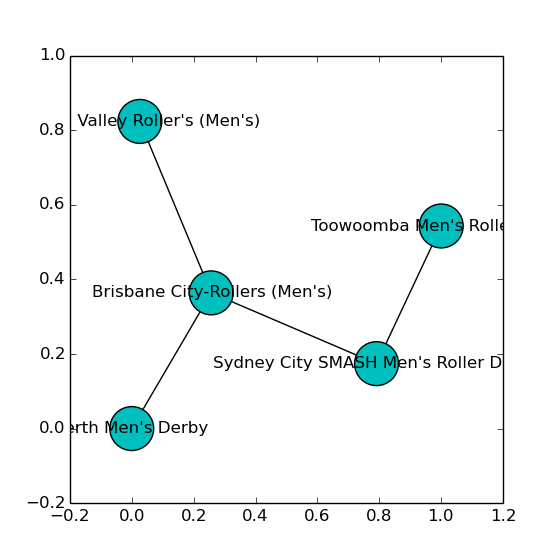 Meanwhile, Women's derby was exploding in Europe, and European teams were increasingly travelling across to the USA to play tougher teams, creating a second pole of derby in the community: 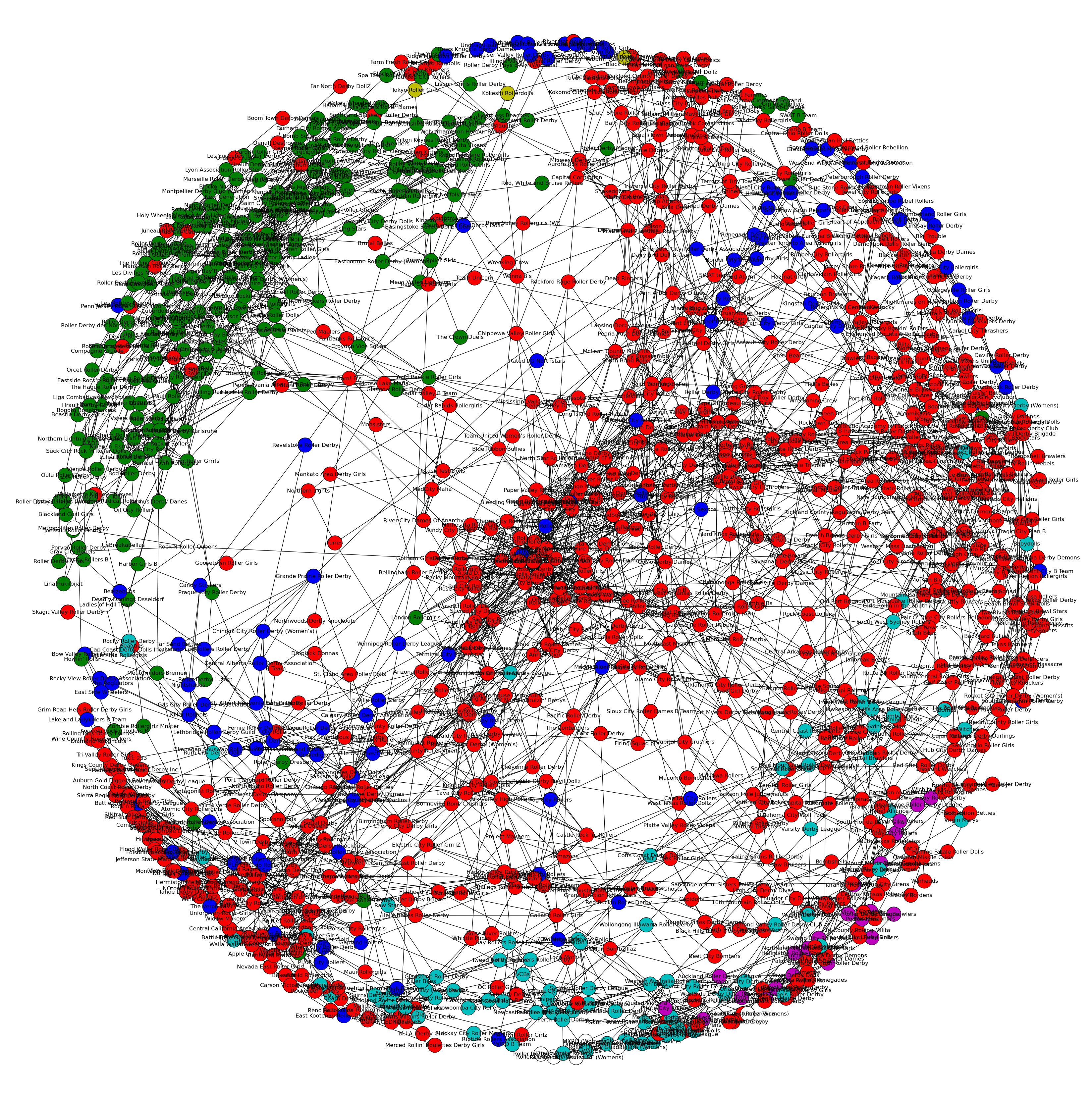 (notice also the first appearance of Yellow in any of our graphs, as Tokyo Roller Girls, Kokeshi Roller Dolls and Devil Dog Derby Dames all make their appearance in the derby scene already integrated into the International scene).

So, fast forwarding to the present day, what does roller derby look like at the start of 2015?

Women's Derby is increasingly truly international, with the dense central cluster of "connected Division 1" type teams being slowly infiltrated by European and Australasian (and a few Latin American) teams drawn in from the edges, although Asia-Pacific derby is still limited to the three Japanese leagues: 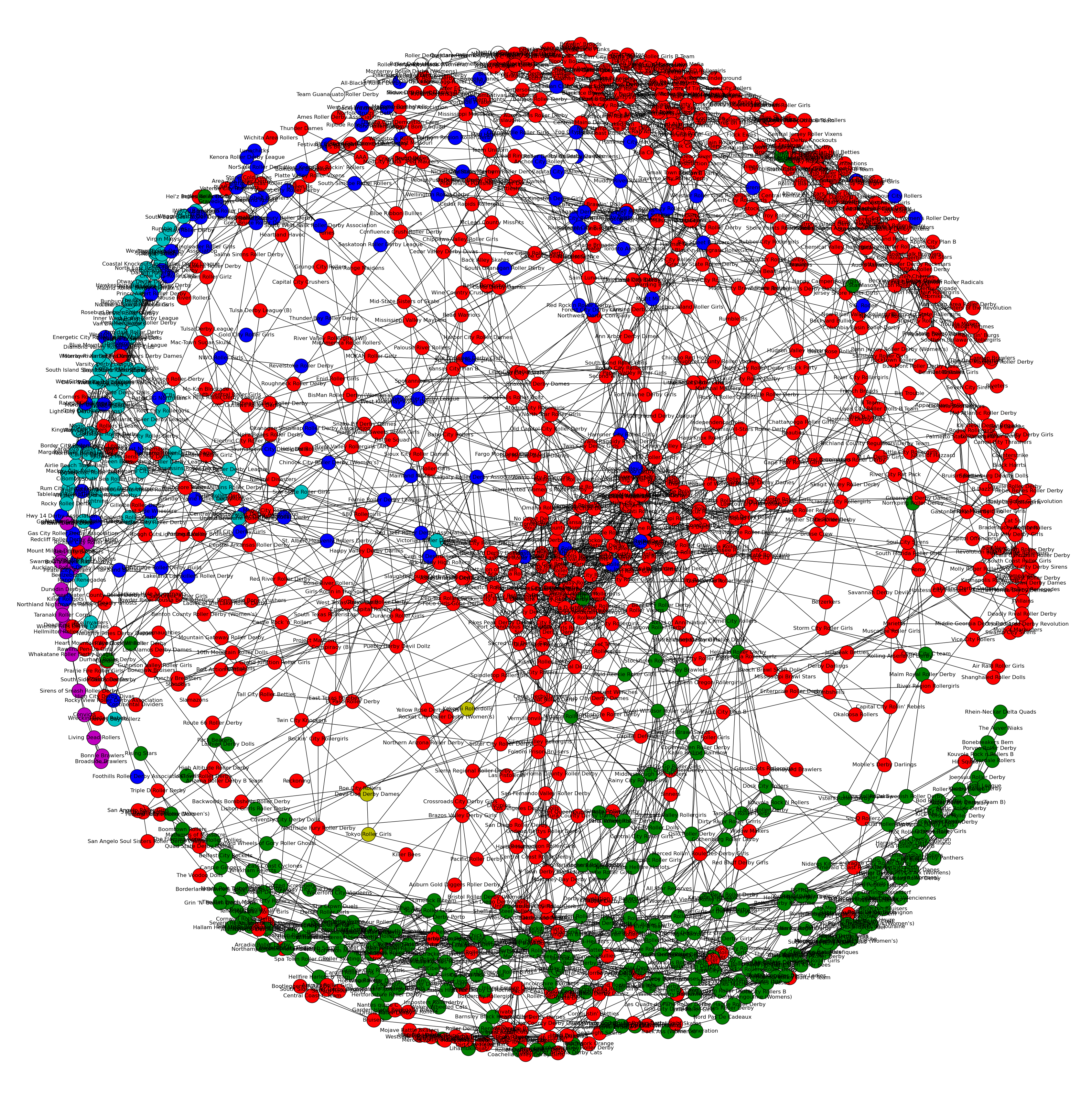 Bucking the trend, however, Latin American derby maintains a strong community of its own, disconnected (for the most part) from the rest of the community: 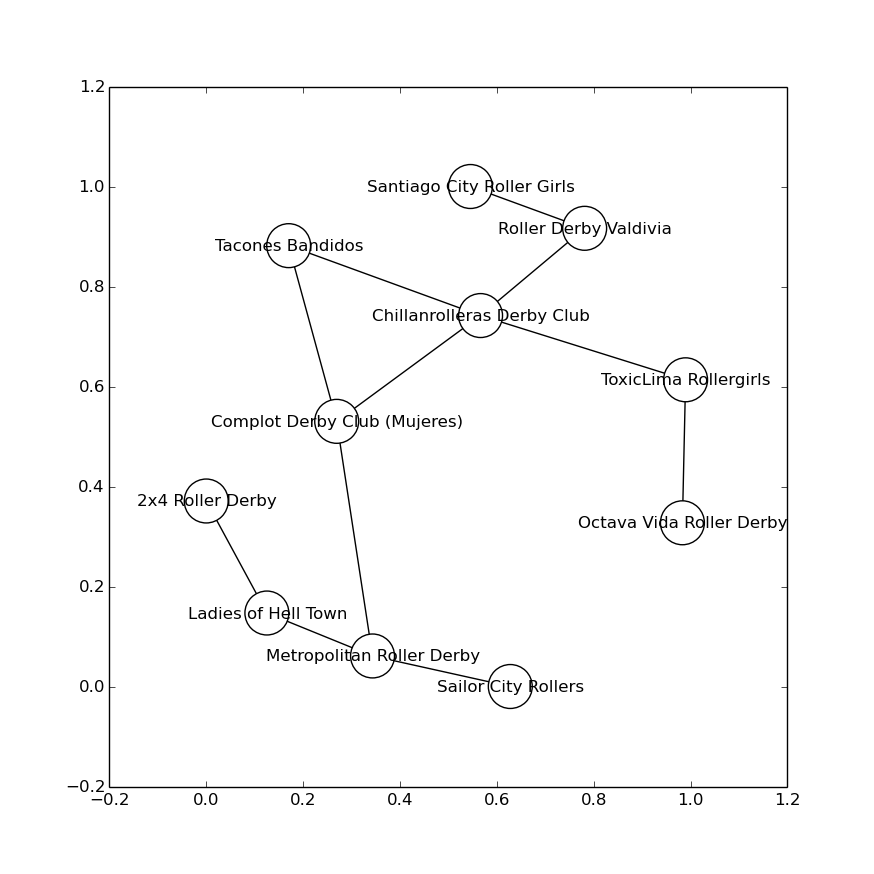 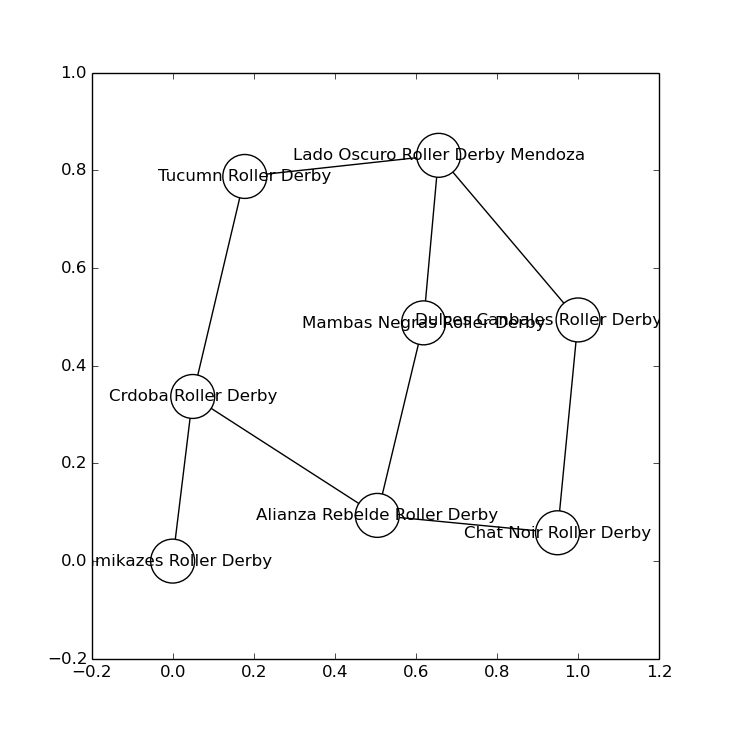 as does the geographically separated Alaskan derby community: 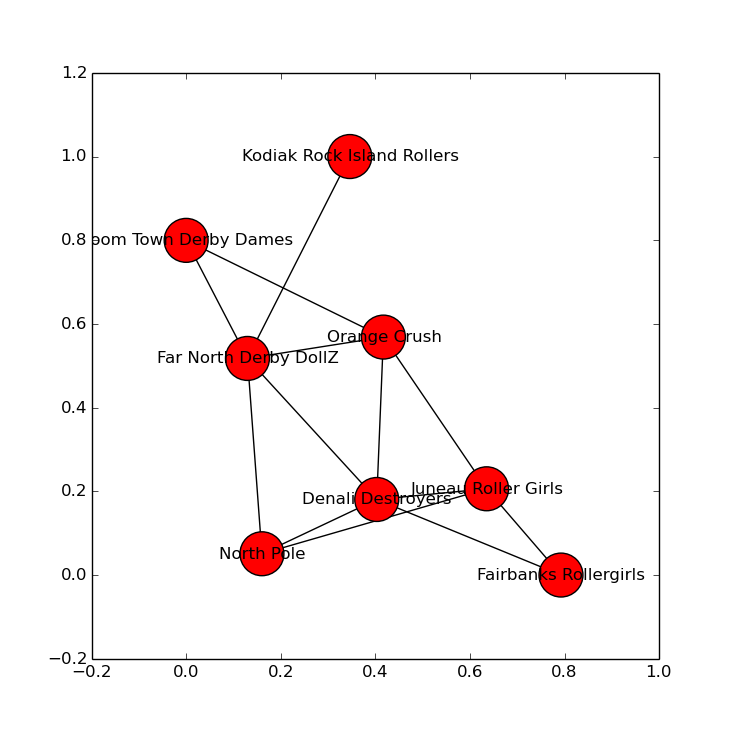 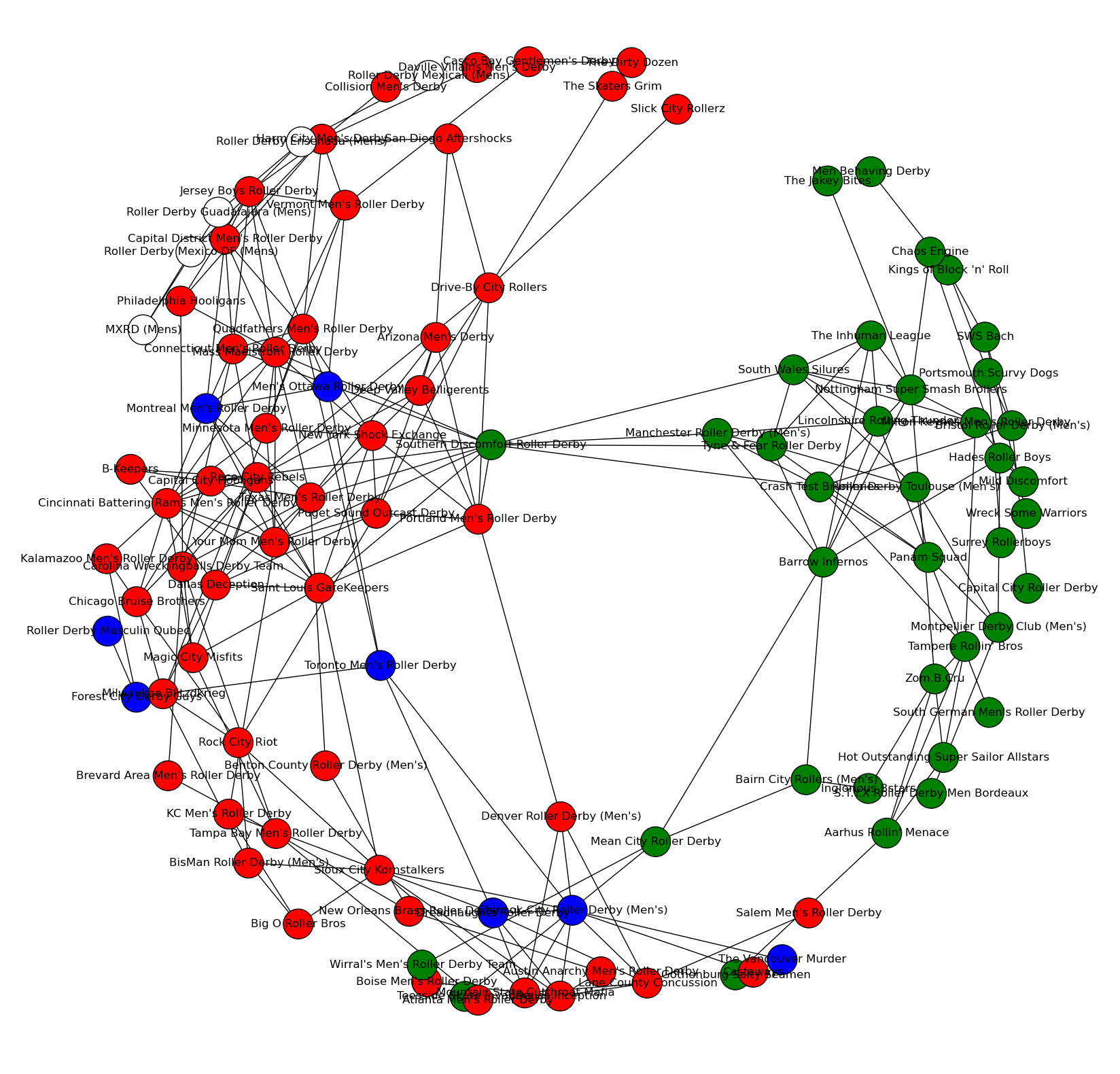 (although Men's derby is a lot more balanced in the sizes of the USA and Europe groups than Women's Derby was in 2010), and a strongly developing and independant Australasian Men's Derby group: 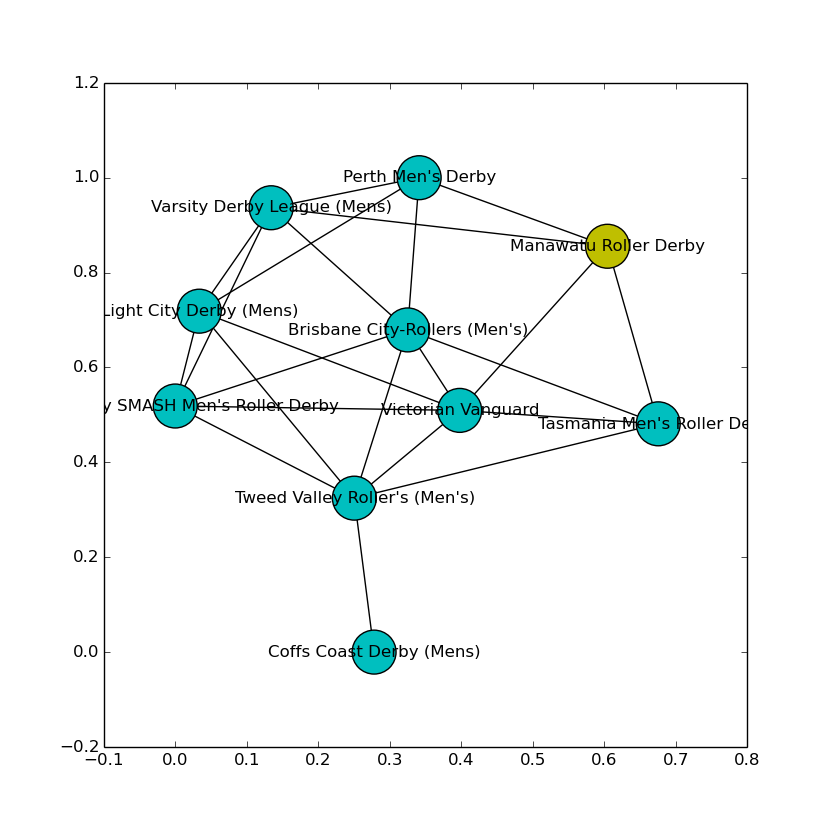 Junior Derby, meanwhile, is still resolutely an American pursuit for the most part: 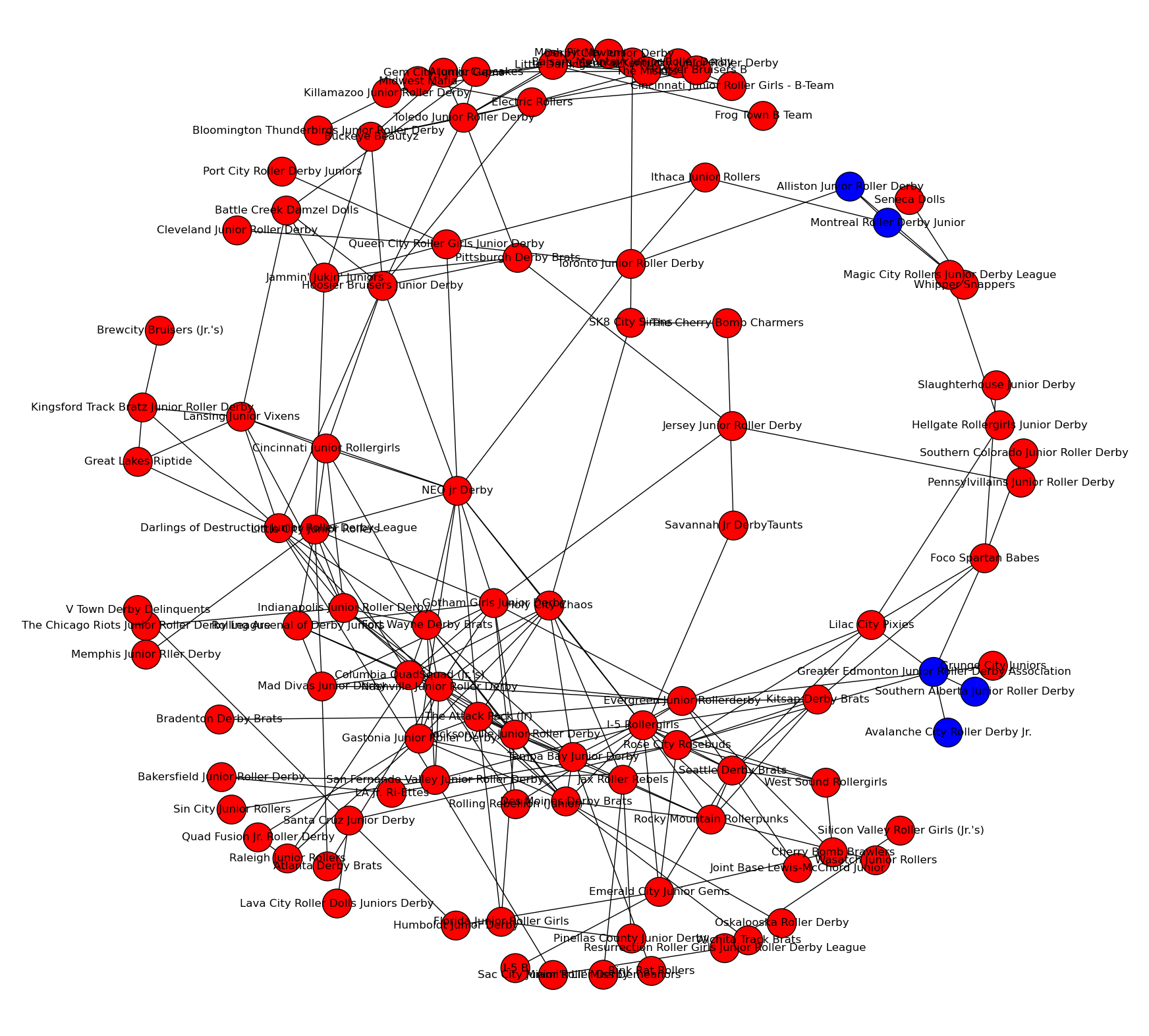 (the few European Junior Derby leagues tend not to have travel teams, or, in Fierce Valley Roller Cubs' case, have no teams with the same age limits to play), although, as with Men's Derby, there's a small Australasian group in evidence as well: 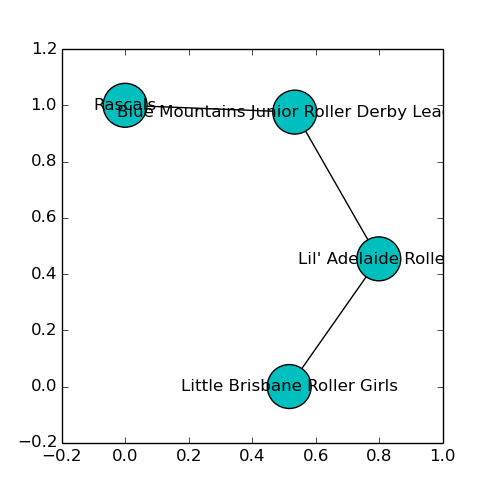 The astute reader will, at this point, be asking why we've not talked about Coed Derby yet. The problem with Coed Derby, based on the FTS records, is that most (WFTDA/MRDA) Coed teams have been Exhibition teams, set up without the formal League structure. As such, they are excluded from the terms in which our plots are constructed: there's literally no bouts on record for formal Coed Travel Teams until 2013! Interestingly, what Coed Derby there is seems to be following a very different track from the USA-led structures in the rest of the community. The single biggest grouping of Coed Teams in 2013 was entirely Europe (in fact, UK) based: 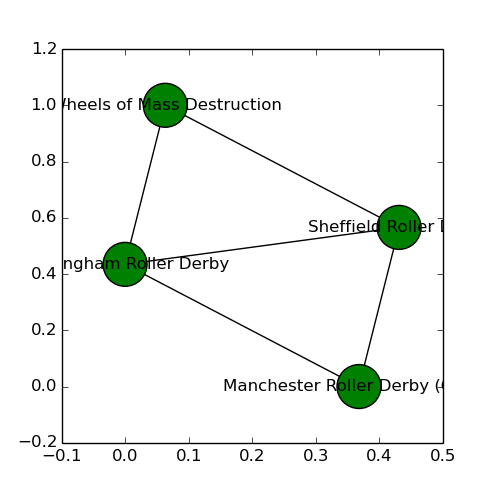 So, what for the future? Well, on the trends we've seen so far, I expect Men's Derby to follow a rather even development, with Australasia joining the International group within the next year, forming a rather well balanced community split three ways in weighting. Women's Derby remains rather unbalanced towards the USA, just because of the delay in derby seeding outside that continent. The evidence suggests that the power imbalance is slowly easing (Glasgow Roller Derby making it into the top 30 WFTDA teams recently, with Stockholm and Helsinki just outside, is a sign of this), but it will probably take several more years before the core derby cluster is noticeably less red than it is now. (We expect it to take about as long for London Rollergirls A to reconnect with the rest of European derby.) The newest region, Asia-Pacific, is something we will cover in a few planned articles to come.

Junior Derby's status outside of the USA is worrying - the evidence from the last year, as several very talented US players have graduated from Junior to Women's derby leagues, suggests that a strong Junior Derby community is very important in the maintenance of a strong Adult community as well. We hope that more will be done in this area across Europe in the coming years.

As for Coed Derby - it's impossibly early to predict. It's possible that the growth of formal teams could be driven entirely from Europe, but as there is no history of this in the sport to date, it is very hard to predict what form its influence could take.

The tools used to generate these plots are available at the author's github repository, along with other statistical tools under development.