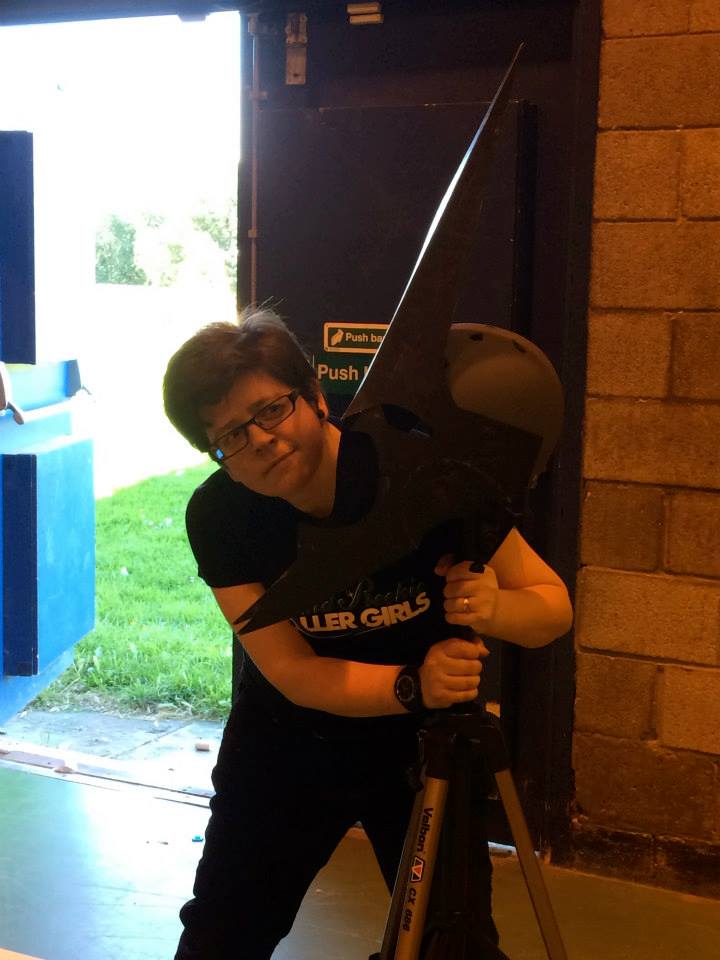 AULD Reekie Roller Girls’ InARRGuration bout for the league’s newest competitive skaters and guests was a victory for all. A close-run game saw Green Eggs and SLAM! Leading with 123 points to Team Nazgul’s 99 at half-time. But the second half saw the Nazguls race back to score 223 to 184 for a stonking win. Team Nazgul Captain Powerhouse said the pre-game secret weapon was team brownies. She said: “We prepared by having a meeting over drinks in the Auld Hoose to discuss rules, default tactics, any worries or issues. “Then we had many more chats on our Facebook group - I think this helped our guest skaters a lot, and helped them feel part of the team. “On the day, the wonderful vice-captain, Radge of Honour made amazing brownies, and I made (equally as amazing, but less tasty) posters. “These had some simple focuses for the bench (keep positive, calm and zen) and on track (have fun, communicate and stay together). “There was also a pink elephant, amongst other beautiful artwork, which really got the point across.” Green Eggs and Slam Captain Hex said fizz helped the green team bond. She said: “We had loads of chat on Facebook and then we all met up at vice captain Dead Metal's house for a meeting where we talked rules and strategy and watched derby on the telly. “We may also have drunk some fizzy drinks...” Hoose and Hex both admitted in the thrill of the game they barely checked the score. Hex said: “I wasn’t actually really looking at the score. “I noticed we were in the lead at half time and yeah! It felt good! “I felt like we were doing really well and the score reflected that.” Hoose said: “Once both teams settled into the game, I felt we were well matched and I was having so much fun, I barely looked at the scoreboard! “Our bench coach, the inimitable Collie, used our team time outs really wisely, when we were able to take a breath, refocus and get back out on track raring to go. “I think the gap in points spurred us on, and the green team really forced us to bring our top game - they were incredibly strong, aggressive with some fantastic offence.” Hex said the turning point was half-time, when four Green players fouled out. She said: “Oh dear, I think the turning point was our penalties. “Everyone was giving their all and sadly it was maybe a bit too much! “Players started to foul out and the bench was getting shorter as people were tiring. “Team Black were also totally amazing!!!” The second half was where Hoose felt the team came into their own because of their focus. She said: “There were a few jams in a row where more than one green player was in the bin. “The black team managed to keep their cool, keep low, slow and strong (SO PROUD), and take total advantage of this. “Our fantastic line up manager, Gerry, noticed this and put on some really smart line ups, with fast jammers. “Once we pulled away, it was going to be difficult to catch us, and added to that, there were a few foul outs on the green side - that's always going to be exhausting! “The boost of focus carried over into the rest of the game, raised the quality of derby, and the rest is history.” After the game, both teams headed to the pub. Hoose said there were many sweaty hugs and lots of beer to celebrate everyone’s hard work. She said: “It was such a great experience, and I think everyone learned a huge amount. “I'm incredibly proud of both teams, and so grateful to ARRG, and all the officials and volunteers on the day! “It didn't matter who won or lost. As clichéd as it sounds, we all won - every single person now has the experience of a well matched, well played game under their belt. That's invaluable. “We all developed skills, and tried things we never thought we could do - we are now better skaters, and have a bunch of new friends to talk derby with! Hex agreed derby love was the order of the day.

She said: “There were lots of hugs and lots of derby love! It was great how close you get in a couple of hours! “Then not so healthy food and drink with greens, blacks, refs, nsos -- all the best people you could hope to hang out with! “There were incredible vibes - how much all the skaters put their heart and souls into it and what an amazing team we created having never met half of the skaters before, how much hard work the organisers had put into it, all the refs, nsos, announcers, audience - everyone involved! I just felt spoiled rotten to be a part of it all! best day EVA!”